In this edition of Theme Park Bits:

It’s always a good thing to see that a major corporation is willing to put its money where its mouth is, and pay its employees a better wage. Such is the case with Universal Orlando, where an announced wage increase will be going into effect early in 2020. That, on the face of it, is the good news. You could, however, point out that a $13-an-hour wage as the starting salary is still not quite in the “livable wage” range for a lot of people in the Central Florida. This is closer to baby-steps positivity. It’s better than going backwards, but Universal (and Disney, too, let’s not forget) can do much more.

When you think about mergers and theme parks, it’s easy to think only of the Walt Disney Company. They own everything, right? Well, not entirely, even in the theme-park business. There were recently rumors floating around that Six Flags might well buy up the Cedar Fair franchise of parks, including one of Disney’s oldest competitors, Knott’s Berry Farm. The rumors may well just be that, based on reactions from the stock market. But Six Flags and Cedar Fair combining forces would make for a much more interesting landscape of American theme parks.

Speaking of the landscape of theme parks, sometimes the news here in Theme Park Bits is of the Musical Chairs variety. To wit, there’s been some — well, scratch that, a lot of restructuring at the executive level at the Disney theme parks. Over at MiceChat, they ran down everything from the current president of Disneyland, Josh D’Amaro, shifting over to oversee Walt Disney World (as a fellow Josh, I wish him well); to the president of Walt Disney World getting a wholly new role, to the departure of the previous executive who oversaw Disneyland, Walt Disney World, and Disneyland Paris. A lot is going on, and it may well be a response to the muted reaction to Galaxy’s Edge. Whatever else is true, these changes could have long-term impacts for the parks–we just might not know it for years. 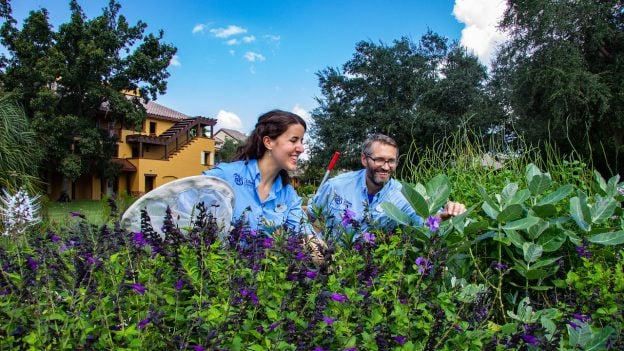 Let’s talk about some conservation efforts Disney is aiming to achieve in its parks, specifically in Florida. Monarch butterflies are among the most beautiful creatures you’ll find in the Central Florida area, but they’ve often been in danger of having declining populations. Dr. Lily Maynard, a Disney Cast Member, has done enough work in Florida to preserve monarch butterflies (along with 70 or so other butterfly species in the area) that the species is now deemed safe from extinction. It’s pretty remarkable work, and a fine reminder that the Disney parks have unexpected ways they’re able to give back to the community.

We’ll wrap up today’s Theme Park Bits column with a real gross story. Not physically-disgusting gross, but more infuriating than anything else. So, let’s paint a picture. You’re at Universal Studios. You, or your kids, just love Gru from Despicable Me so much that you have to get a picture. (I’m not with you there, but to each their own.) You get the picture, and it’s all great…until you notice that Gru has made a very specific, very disturbing hand signal in the photo tied to white supremacy. (Yes, that sentence was an adventure for all of us, but I’m glad we made it.) This just happened to a 6-year old biracial girl; the good news is that the actor in question was fired for their hand signal. The bad news is that it had to happen in the first place. Again: gross story.