Thor: Love and Thunder: How Marvel Embraced the LED Volume of ILMs StageCraft

Thanks to Taika Waititi and “Thor: Love and Thunder,” ILM’s game-changing StageCraft LED volume is now a part of the Marvel Cinematic Universe’s technological arsenal. Getting its hands on the latest virtual production tool marks a big step forward for Marvel: No longer exclusively reliant on blue or green screen backgrounds, the studio can now use StageCraft’s more sophisticated and flexible wraparound wall to shoot actors against a blend of practical and virtual environments rendered in real time. For “Love and Thunder,” this included the jungle oasis where Gorr (Christian Bale) becomes the God Butcher, the Battle of Indigarr with Thor (Chris Hemsworth) and The Guardians of the Galaxy, and the Bifrost Goat Boat scene between Thor and Jane/Mighty Thor (Natalie Portman).

Given how aggressively Waititi likes to shoot his action scenes natively in IMAX — which requires doubling the depth of field — it was hard to use StageCraft to its fullest, according to Marvel’s production VFX supervisor, Jake Morrison. Previous uses of StageCraft for “The Mandalorian” and “The Batman” excelled at contained scenes with very specific lighting and shallow depth of field; the visual demands of “Love and Thunder” led to the utilization of StageCraft as an interactive lighting tool for shooting the actors in the volume in the best possible way with the sharp backgrounds.

The lush jungle with the exotic and colorful plants and fauna provided a new design and animation opportunity for the StageCraft virtual production team. “We have a team of animators that worked on the plants [that were very imaginative],” Sonia Contreras, ILM’s associate virtual production supervisor, told IndieWire. “Then they hand it off to us [in the volume] with certain controls that allow us to then look at it in relation to actually how the digital plants are interacting with the practical environment. If our plants are moving too fast or too slow, we can tweak it to make them blend with the practical plants.”

In fact, one of her favorite moments during the live rendering of the jungle set was when a call came in to change the color of a practical plant that had been mistaken for an animated one. “To me, that tells you that the blend was so convincing that you couldn’t tell the difference,” Contreras said. “It’s what we aim for.” 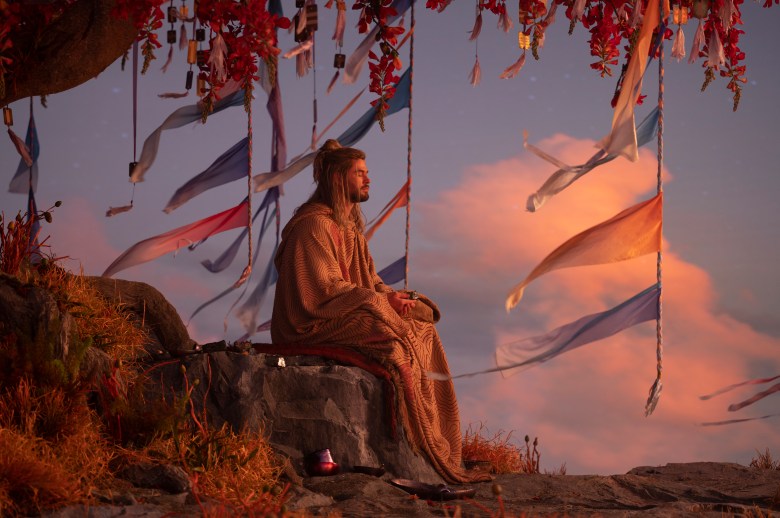 The most challenging scene was the Battle of Indigarr, in which the Guardians protect the Indigarrians from Habooska the Horrible and his Booskan army, with Thor coming to the rescue. It was a large environment spread out among several StageCraft sets. The environment consisted of a pink-orange landscape with strange shapes and multiple moons and nebulae in the sky.

“We spent several days on this one,” Contreras said. “We had a set location up by the tree where Thor was doing his meditation, and then we had another one where they’re doing the battle with harsh elements. Part of the work that we do is mocap tracking of cameras and you have spark elements that tend to interfere with the system a bit. The challenge was to track the cameras, masking markers, and being able to get what we needed. We had Thor, the Guardians, some additional stunt actors, and actors who were going to be later replaced with CG characters.”

The sky provided a trippy opportunity for moving around the planets and stars. “You get to have all these planets flying around we had to learn to control the placement and movement of the moons and nebulae,” she added.

Flying scenes, meanwhile, including one with Thor, allowed the StageCraft team to play with flipping the LED wall environment. “My big revelation is that the volume is doing things that I didn’t know it could do,” Morrison said. “For example, instead of having an actor fly horizontally, I would have them fly vertically and shoot them that way because the gravity looks more natural.”

“We could rotate things around any way we needed very quickly,” Contreras said. “And and there are some times when we drive it and navigate the world in a way that makes it feel like you’re actually moving around.”

The scene that Contreras had the most direct impact on was the Goat boat ride with the Bifrost rainbow effect flying by like hyperspace. When she was asked to make the Bifrost go 20 percent faster, Contreras inadvertently increased it to 200 percent instead. “All of a sudden, you had a crazy Bifrost going by and Taika liked it so much, he was like, ‘Ah, this is awesome,’” she said. “And they ended up going much faster. After that, Taika started playing Abba on his phone. These are the fun moments of having it be live.”