Kate, 53, joined Alex Jones, 44, and Michael Ball, 58, on The One Show ahead of her documentary about Derek, 53, airing on ITV next week. The father-of-two has been in the hospital for almost a year after contracting coronavirus last March and he is one of the rarest cases of survival from the illness which has caused the death of thousands across the globe. Speaking on the BBC programme, the Good Morning Britain host explained her husband is still fighting the effects of COVID-19 and she is “desperately trying to hold on to him”. 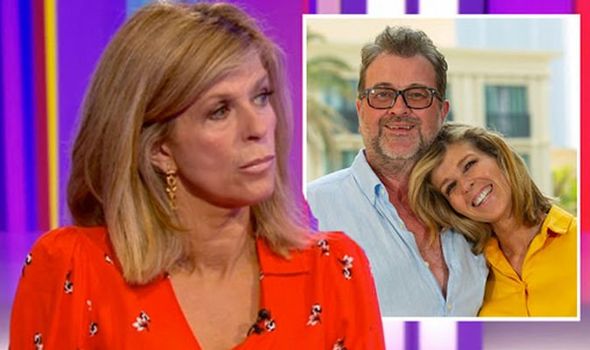 Asked by the presenters how her husband was doing, the mother-of-two explained that after reading the headlines about the first few cases last year, she suddenly found herself “right in the middle of it”.

Kate went on to describe how she felt she was living in a “strange world” where she was only existing “minute by minute” as she waited for updates on her spouse from the hospital.

Claiming Derek was one of the lucky ones for surviving the illness, the broadcaster admitted she felt she was on a “lifeboat”.

Explaining her comments a little further, the presenter said it was as if she was bobbing along the water and “trying to hold on to him”.

She also said that if it “tough” for her to watch her husband going through this, she can’t imagine what it’s like for him.