We're pitting the ABC reality hit's married couples, siblings and best friends against each other in the ultimate ballroom ranking. 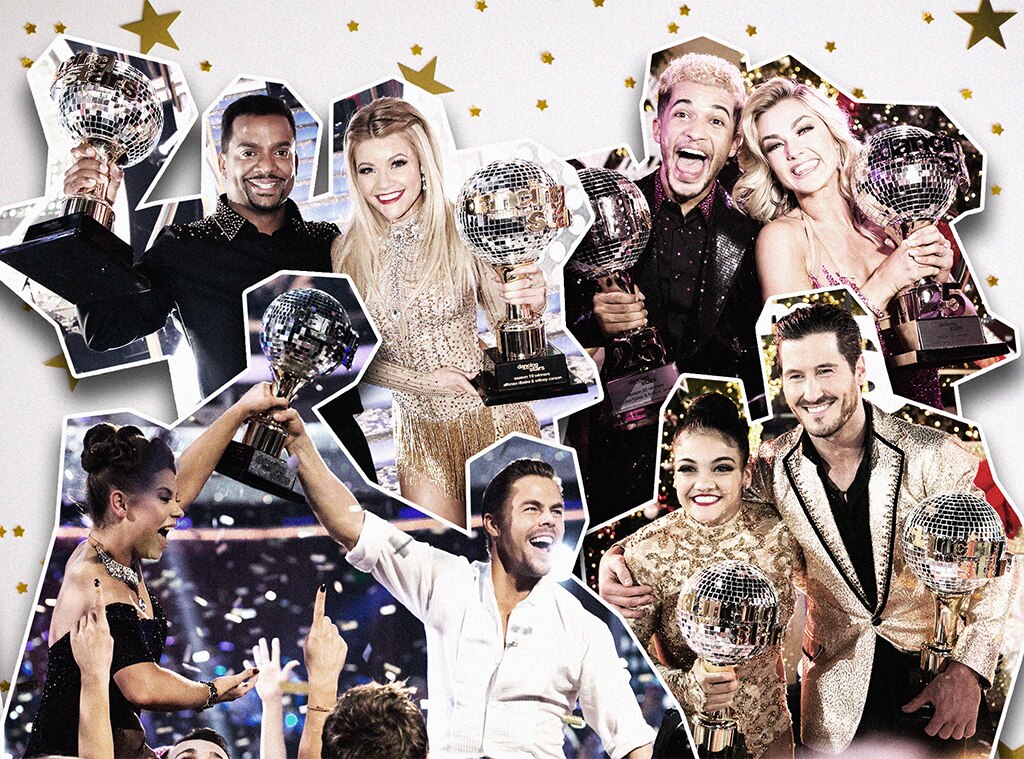 Over the years, many of Dancing With the Stars' professional dancers have become household names, with some of them even more famous than the celebs they are partnered with.

Each pro has their own unique style, personality quirk and loyal fanbase. Plus, you can tell they all truly get along, creating a seriously coordinated (and toned) TV family viewers love to hang out with each season.

Still, at the end of the day, DWTS is a competition and there's nothing a cast member loves more than to hoist a delightfully tacky mirrorball trophy over their head come the finale night.

In honor of the start of season 29, which debuted last Monday with stars like Carole Baskin, Kaitlyn Bristowe and Nelly competing, we decided to rank all 47 of the show's professional dancers over the years, including the married pairs and the siblings. Hey, it's not an easy job but someone had to do it.

So which pro landed all 10s from us? And which Chmerkovskiy bro secured a higher spot? Get ready to have more opinions than head judge Len Goodman after a freestyle routine…

You can't convince us he was actually ever on the show.

Not to sound like a broken record, but who?!

It's sad when your celeb partner, ESPN personality Kenny Mayne, has appeared in more seasons than you have, no?

One and done after being partnered with Pamela Anderson. Not a memorable experience for him or us.

Married to dance partner and fellow pro Pasha Pashkov, Daniella is making her DWTS debut in season 29 with Nelly, so she has a lot to prove before we ride with her 3-wheeling in the fo' with the gold Ds.

The Russian pro, who was previously on NBC's World of Dance, is back for his second season and he's been thrown into the lion's tiger's den: He's paired with Tiger King star Carole Baskin. Judging from the first week of competition, we're not sure Pasha will be king of the jungle ballroom this season.

Only appeared on two seasons, but fun fact: She used to compete with Tony Dovolani AND Maksim Chmerkovskiy. OK, not that fun, but it is a fact.

She only participated in one season, dancing with Bill Nye the Science Guy. Guess this was an experiment that failed?

Competed twice, but was nominated for an Emmy for his choreography. Respect.

A dancer for four seasons (the first three and then season 10), the most memorable thing about her was that she married one of the show's field producers. We'd watch that rom-com on Lifetime.

After appearing on So You Think You Can Dance, Dmitry competed on three seasons of DWTS. But we kind of totally forget about him? Guess that's what happens when you never place higher than 8th?

We almost thought Gleb was a member of the one-and-done club when the Russian danced with Lisa Vanderpump in season 16. Like a night out at SUR, it's was all a bit of a blur and he actually went to the troupe the following season.

But like a phoenix, Gleb rose from the ashes and returned to pro status in season 23, going on to appear in every season since. But he has never made a final.

Remember when they brought in Mark's dad to dance with Cloris Leachman and Florence Henderson? Type-cast much!

Always a troupe member, only once a featured pro. Still, he was one of the more popular troupe members…and look at that smile!

Talk about a long overdue moment: 29 seasons in and Britt is the show's first Black female pro, with the 31-year-old serving six seasons in the troupe.

While we've yet to see how Britt's first outing as a member of the main cast will go, we have high hopes considering the fact she appeared in all three High School Musical films, performed during Katy Perry's Super Bowl Halftime Show and was featured in La La Land. Your. Faves. Could. Never.

Respect must be paid to the show's first ever pro winner. Sadly, he could never reclaim his former glory.

We still miss the Irishman, who was a fan-fave before ditching us for the UK's Strictly Come Dancing. Rude. Points deducted!

After three seasons in the troupe, Brandon scored one of season 27's most talented celebs: Tinashe. But the pair were criminally ousted just weeks in to the competition, one of the most shocking eliminations in the show's history.

While he's yet to fully make his mark, we have high hopes for Brandon and his future on DWTS.

After serving four years as a troupe member, Jenna's transition to pro status was a rollercoaster. After being the first pair eliminated in her debut outing, she came back to win her second season with Olympic figure skater Adam Rippon. We love a comeback. And we also love her sweet love story with fellow pro Val Chmerkovskiy.

In her seven seasons, Chelsie's best finish was fourth place. Still, she was too legit to quit. JK, she did quit.

One the nicest and most patient dancers. So yeah, that counts for something!

We won't lie, we originally liked Sasha more as the annual Halloween prankster/most featured troupe member. But over time, we've seen the error of our thinking and apologize to the Aussie who has placed third in two seasons (with partners Tonya Harding and Ally Brooke) and is proving to be a real threat with Justina Machado this season.

While we love that she always pushed the boundaries and rules of DWTS , her style was ultimately better suited for So You Think You Can Dance —and her Tik Tok account because we can't get enough of Allison and husband tWitch Boss' dance moves and love story.

Real-talk, Keo had been partnered with the bottom of the barrel when it came to celebs with the ability to, you know, dance early in his DWTS career.

He wasn't really given a chance to shine until his sixth outing, coming in third place with Harry Potter's Evanna Lynch. But whatever, he's a prince (seriously) and we're not, so he's doing just fine.

A consistent dancer and she and Alec are definitely one of the hottest couples to come out of DWTS, for sure. So a win for them and a win for eyeballs everywhere.

Lacey transitioned from SYTYCD to DWTS seamlessly, and was a favorite on both. Bubbly and fun, with a penchant for creative choreography, we were sad to see her go.