The actor is excited for his trip to space aboard the New Shepard, but he can’t ignore the jokes surrounding it 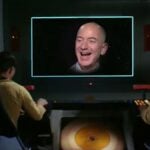 Cooper immediately cracked up, admitting he wasn’t totally sure if Shatner would pick up on the joke. At that, Shatner tossed a quick jab at the host himself, before making one more penis joke about the rocket.

“Well, leave it to you to throw it out there for someone else to pick it up,” Shatner joked. “But it certainly does look – when they say ‘insertion’ do they really mean insertion?”

All jokes aside, Shatner assured Cooper that he is definitely excited to go to space. “I want to go warp speed, take me to warp speed — and they say ‘what?’” Shatner said.

The actor will be part of the nextNew Shepard mission alongside Audrey Powers, Blue Origin’s vice president of Mission & Flight Operations. Crew members Chris Boshuizen and Glen de Vries will also be on board the shuttle, which is set to lift off from Launch Site One in West Texas next week.

Fans will be able to watch the launch as it happens, with coverage beginning 90 minutes prior to liftoff. The expedition is currently targeted for 10:30 am PT on Oct. 12.