Anyone who was a child or teenager in the late-1990s remembers Woodstock ’99; it was one of those presumably life-altering rites of passage that proved you were almost an adult. But much like MTV Spring Break, Woodstock ’99 held a far darker reality only clearly visible after entering adulthood.

Director Garret Price is no slouch at being able to perfectly encapsulate a moment in time, whether that be in the music world (he helmed 2015’s “Janis Joplin: Little Girl Blue”) or a person (2019’s “Love, Antosha”). Here, the minute the opening guitar riff of Lit’s “My Own Worst Enemy” starts playing, a few of the doc’s attributes are immediately evident: If you loved rock of this period you’re in for a treat, and you are definitely gonna feel like you dropped back into 1999.

The documentary plays out in a straightforward manner, detailing the desire from Woodstock creatives Michael Lang and John Schuer to do another multi-day music festival in the vein of what Lang had created in 1969. In theory, it sounded like a good idea, especially as the pair had done Woodstock ’94 five years earlier with few hiccups.

But as Price and his talking heads point out, Lang and Schuer’s belief that their festival was a haven for peace and love was a fallacy from the beginning. As clips from the 1970 documentary feature “Woodstock” play, it’s evident that ugly elements like sexual assault might have been happening since the start and simply went under-reported.

A heavy element of “Woodstock 99” is how the Baby Boomer generation was desperate to force younger audiences to love the things they loved, even if the moment had passed. One element of this out-of-touch mentality was holding Woodstock 99 on the Griffiss Air Force Base in Rome, New York — meaning the festival most commonly perceived through the lens of the counterculture was taking place at a military institution.

Clocking in at nearly two hours, it’s amazing how breathless the pace is from the minute the heavily young, white, male crowd starts to arrive. The overarching thesis that is honed again and again is that the events of Woodstock ’99 weren’t the result of a few bad apples — no matter how many times Schuer goes on-camera blaming Limp Bizkit frontman Fred Durst for “inciting a riot” — but was reflective of everything that came before it.

Toward the end of the doc, one attendee mentions being part of a mob that broke into the festival’s food trucks; he recounts the story with shock that he could have turned from a mild-mannered kid into someone ripped from “Lord of the Flies.” But as Price and crew lay out, the world was heading to this point. The year 1999 saw Bill Clinton’s impeachment — with Kid Rock calling Monica Lewinsky a “ho” during his Woodstock set — as well as the Columbine massacre, events that re-shaped the concept of “boys will be boys” and how music was experienced by new generations. 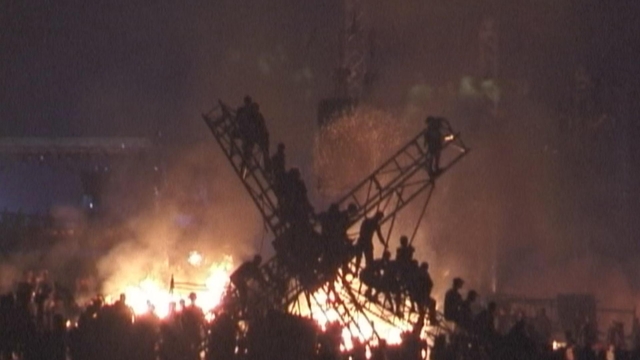 At the same time, a disparity existed between music aimed at men — rock music of which numerous popular acts at the time would play Woodstock ’99 — and the more pop-influenced world aimed at young women. As MTV VJ Dave Holmes said in the doc, many young men at the time felt MTV, and music in general, had been taken away from them and given to “their little sisters.” Ironically, in another hilarious antiquated comment from Schuer, the festival didn’t aim to exclude female performers. (There were three at Woodstock ’99, one on each day.)

When the documentary isn’t looking at the “why” Woodstock ’99 was a disaster, it’s showing, through numerous on-site cameras, what it was. Anyone who was alive at the time remembers stories of people rolling around in what they thought was mud (it wasn’t), but it’s also something to see demoralized people sleeping under trailers to keep cool or the numerous instances of casual sexual assault that takes place. And if you want Schuer’s opinion on the rapes and assaults that happened during the festival, he blames the women who paraded around with no clothes on.

As several talking heads mention, the emphasis on female nudity and exploitation was present in 1969 whether Schuer wants to admit it or not. The cameramen in the 1970 feature film display topless women regularly, but with Woodstock ’99 it felt far more invasive, so much so that there are several scenes where bandmembers are on-stage pleading with the male audience to be respectful or the cameras to stop featuring the women.

Of course, Price’s film is not without its own flaws. One commenter asks what it had to be like for a Black attendee to be at Woodstock ’99, especially during DMX’s set when the predominately white audience starts shouting the N-word. Unfortunately, there are no Black attendees interviewed to answer that question. Conversely, there’s only one female attendee interviewed who doesn’t add much meat to the discourse, short of not making the entire thing feel too male-centric.

Setting aside its subjects’ lack of diversity, “Woodstock 99” is a must-watch documentary that reminds us, yet again, about history’s inevitable ability to repeat itself. You end up drawing a clear line between misogynist political groups of today and those who felt it was OK to set stages on fire in 1999. The music remains fun, at least for those who remember growing up with it, but certainly feels like a lifetime ago.