Never in a million years did we see this one coming. In Sunday’s episode of Yellowstone, Season 4’s penultimate, John dropped on Beth the most hurtful word a parent can hurl at their child: He wasn’t so much mad at her as he was — nooo! — disappointed in her. And it only got more painful from there. Read on, and we’ll not only discuss how, we’ll touch on all the highlights of “No Such Thing as Fair.” 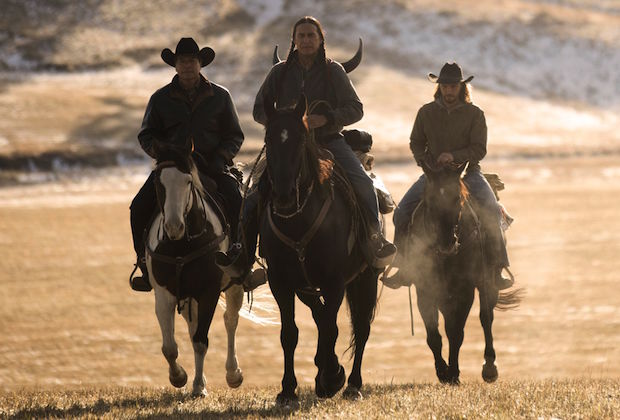 ‘FAIR MEANS ONE SIDE GOT EXACTLY WHAT THEY WANTED IN A WAY THE OTHER SIDE CAN’T COMPLAIN ABOUT’ | As the hour began, Beth was steamed with Rip for not stopping her father from risking his life in a shootout. How come she was so worried about John and not her husband-to-be? “Baby, I never worry about you,” she told him. “I know nothing’s gonna happen to you.” Oh, but it was, he insisted. One day, “it happens to us all.” (Please don’t let that be foreshadowing.) Later, after John returned home from teaching Carter riding 101, Beth threw a coffee cup at her dad. She was livid that he’d put his ass on the line for a bunch of strangers when he hadn’t done s—t to make Jamie pay for leaving her scarred for life. Jamie wasn’t behind the attacks, John said. Riggins had ordered them to send a message to rival gang members that he wasn’t weak. Since the Duttons had survived, Riggins was seen as weak and therefore was as good as dead. (Am I the only one who feels like we skipped the beat in which John would’ve at least asked what Jamie had learned during his interrogation of Riggins?) What did Beth want John to do, waste his life on a piece of s—t like Riggins? “No, Daddy,” she replied, “that’s what my life is for.” No sooner had she stormed out than John got a call from Summer: The D.A. was trying to send her up the river for life!

Making a beeline for the jailhouse, John took a meeting with interim (and soon-to-be just plain ol’ permanent) Sheriff Bill Ramsey, who shrugged off the notion that Haskell had left big shoes to fill. He “was a gambling addict and alcoholic who only served the highest bidder,” noted his successor, adding that “things will be different with me in charge.” New rules? John asked. “Still the old rules,” Bill replied, “but now they’ll be enforced.” Sitting in on Summer’s meeting with her public defender, John was on one hand empathetic (he knew she was no criminal) and on the other, not at all (he even called her “young lady”). Frustrated, Summer sighed, “I should’ve never listened to your daughter.” Come again? “It wasn’t my idea to slap the first cop I saw” to get on the news, Summer explained. With that, John promised to extricate her from this mess. He knew the judge, and better yet, the judge owed him a favor. Meanwhile, at Jamie’s, he was chagrined to see the media’s coverage of the diner shootout. “Now he gets to be the hero on top of f—king everything else!” Christina remained convinced that her babydaddy could be governor. Their next step, she said, would be to introduce the world to his real father. Erm, but he served 30 years for the murder of his real mom, Jamie said. “And you’re just telling me this now?” Christina asked. OK, new plan: Jamie would have to distance himself from Garrett starting yesterday. Even the ex-con saw the wisdom in the notion. He was glad that Jamie didn’t want him to go but noted that sometimes the things we want are the things that are the worst for us. 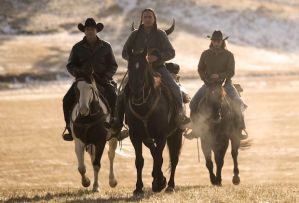 ‘THE WOLF IS YOUR SPIRIT ANIMAL’ | While all that was going on, Kayce consulted with Rainwater and Mo to try to figure out why, if man and wolf are supposed to destroy one another, one seemed to be protecting him. Ask it, Mo said. “Cry for a vision.” Though Kayce wasn’t sure he believed in the harrowing ritual that would require him to go four days without food, water or, apparently, pants, he was still willing to give it a go. If he wound up with one foot in the grave, good. “You must stand on a cliff of death to understand your purpose in life,” Mo explained. “It’s the only place where you can see it.” With that, he and Rainwater left Kayce alone in the middle of nowhere. Hey, “how will you know when I’m done?” he called after them. “How will you know?” Rainwater replied. Helpful. Back in town, John ran into Garrett at a diner and warned Jamie’s biodad, “If your plan is to get me back for what you did to yourself, I’ll rid the f—king world of you.” Oh, and definitely try the Salisbury steak. It’s awesome, and “you never know which meal will be your last.” Down in Texas, Jimmy and Emily were adorably facing the fact that he was going to be away for a week. When she joked that missing her was a serious condition, one with side effects like “extreme discomfort in the groin area,” he laughed, “So loving you’s kinda like a venereal disease.” Ooh, he’d used the L word. Yeah, they were both whipped, they admitted. And just that fast, Emily asked how she was different from Mia. “She liked the potential in me and never really got it,” Jimmy theorized. “It seems like you like me for who I am right now.” That she did, Emily assured him. “My standards are low.”

Upon bumping into Travis at the horse show he was working for the Four Sixes — the Yellowstone co-owned the Stallion of the Year, by the way — Jimmy said that he got it now: It really was just you and a horse. “School’s over,” Travis told him, “and you came out of it a cowboy.” So he was going to take Jimmy back to the Yellowstone. Fast as he could, Jimmy explained to Emily that although he didn’t want to, he really had to go — he owed John. She hated to hear that but respected it, so she said her goodbye as quickly as an auctioneer might. That night, Jimmy showed up at her door. “I’m not saying goodbye,” he told her. “I’m keeping you.” Well, she couldn’t let him break his word to John; that’d eventually be the end of them, anyway. How about if Jimmy kept his word and then came back to her? If he asked her to wait for him, she would. So he did, and dunno about you, but I 100-percent believed she’d wait. Emily is the anti-Mia! 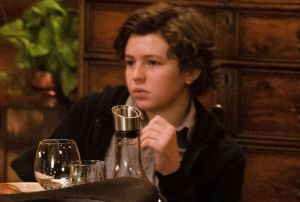 ‘I FIGHT STANDING’ | At the Yellowstone, Beth, Rip and Carter were settled in for dinner in the den when John said nope, they were going to the dining room, and yeah, his daughter wasn’t going to enjoy this meal. Knowing when to beat a hasty retreat, Rip took Carter to the bunkhouse, where the kid proved to be a real card shark. Once John and Beth were alone, he called her out for what she’d done to Summer. If Beth was gonna fight for him, she was gonna have to do so with some morality. “We don’t kill sheep,” he grumbled, “we kill wolves.” What she’d done to Summer, it was cruel. “You’ve really disappointed me, honey,” he admitted, “and I never thought I’d say that about you.” He couldn’t have hurt Beth more if he’d struck her. In fact, maybe she should “go somewhere else while I fight this alone,” he suggested. “This is my home,” she pointed out. “Might be time to find another one,” he replied. Cold, John. That ain’t right.

Reeling, Beth went to find Rip at the bunkhouse but caught Walker’s eye instead. (Uh-oh.) Why so sad? he asked. “I just lost the one thing I spent my entire life fighting for,” she answered. “You know any sad songs? Play one for me.” So they went to the darkened barn beneath a sky full of stars, and Walker crooned a heart-shredder so that Beth could have herself a good cry. When Rip stuck his head out the bunkhouse door, he saw his fiancée in tears, Walker strumming away… and just went back inside. Yikes. None of this seemed good at all. What’s your take? Is Yellowstone inching toward a Rip/Beth split? How wrong was John to cast out Beth for, in essence, being exactly the monster he made her? And WTH is the meaning of the wolf?!?