Simon Helberg became the latest Big Bang Theory vet to reprise his role (in a voiceover capacity) during Thursday’s Young Sheldon — an episode that revealed the origin story of Sheldon’s complicated relationship with engineering (and with Howard). 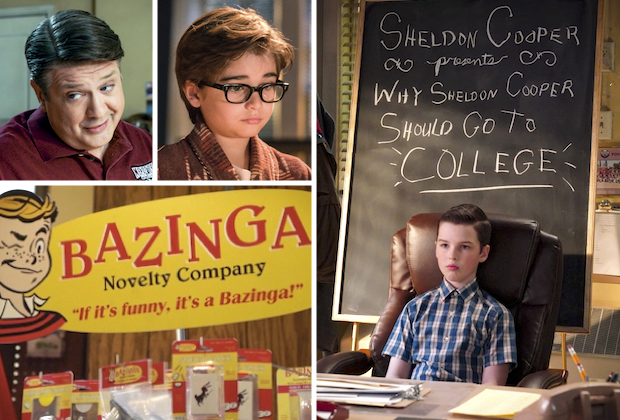 Throughout Big Bang‘s 12 seasons, Dr. Cooper routinely dismissed engineering as a profession and teased Helberg’s Wolowitz for being the only one among his initial core group of friends (which also included Leonard and Raj) not to have a doctorate. But during this week’s episode of the ongoing prequel series, Adult Sheldon (once again voiced by Jim Parsons) revealed to his “tertiary friend” that his disdain for engineering had little to do with him — at least at first.

As it turned out, Sheldon’s opinion was soured by his first-ever engineering instructor, Professor Boucher (played by Fringe‘s Lance Reddick), who refused to help him figure out where he went wrong with a difficult assignment. When the boy genius finally figured it out for himself, he rushed to class to show his work to Boucher, who locked him out for being tardy.

“I hate engineering,” the 11-year-old exclaimed as he walked away from Boucher’s lecture in a huff.

Howard: Wait! So after all this time, that’s your problem with engineering?
Sheldon: Evidently.
Howard: So all the teasing, and all the abuse, had nothing to do with me!
Sheldon: I’ll admit, at first I had a chip on my shoulder because of that class. But then it was mostly you.
Howard: Unbelievable. When will I learn?
Sheldon: I could give you that answer, but if you figure it out for yourself, it’ll mean so much more.
Howard: Goodbye, Sheldon.
Sheldon: Bye!

Helberg is the third Big Bang Theory alum to join Parsons on Young Sheldon. During Season 3, Kaley Cuoco (aka Penny) made an uncredited voice cameo in one of Sheldon’s nightmares. Then in the Season 4 premiere, Mayim Bialik returned to voice Amy — and to help Sheldon reveal that their first child would be named Leonard.

“We love being able to explore the origins of Sheldon Cooper every week on Young Sheldon,” series co-creator Steve Molaro said in a previous statement. “But it’s always extra fun when we’re able to incorporate Big Bang Theory Easter eggs into the storylines. Getting to work with Simon again to help explain Sheldon’s long hatred of engineering was a dream come true. Jim and Simon — even in voiceover on Zoom — didn’t miss a beat in their banter as Sheldon Cooper and Howard Wolowitz.”

A younger version of Howard (played by Ethan Stern) previously appeared during Young Sheldon‘s Season 2 finale (alongside other pint-sized Big Bang characters), which aired the same night as BBT‘s May 2019 series finale.

What did you think of Helberg’s return as Howard to the SCCU (the Sheldon Cooper Cinematic Universe)?