A favorable exchange rate between the dollar and the euro may make a summer getaway to Europe look attractive this year, but travelers who have been there warn that the continent’s airports are a mess.

“Just getting my boarding pass required at least an hour and half of waiting, and waiting to get through security was another three hours,” he said. “I looked at the number of steps I took and it was at least two to three kilometers of lines.”

Flying to Frankfurt from Amsterdam. During the spent in security line at @Schiphol I could have biked to Frankfurt. This is what privatizing security looks like. pic.twitter.com/8Vvv23kuX9

Cassell wound up having to connect through Frankfurt after his original direct flight was canceled, and he said he wound up waiting on more lines there, including an hour-and-a-half-long one just to confirm his luggage made it onto the new flight. He was told by the airline that it did, but it never showed up on the carousel at Dulles.

Nanci Belmont, a bassoonist from New York had a similar experience flying home from Italy via Paris on Sunday.

Delay compensation: What an airline owes you if your flight isn’t on time

“I go to the carousel where our bags are supposed to be, and there were so many people standing there, the carousel finally stopped and the carousel is full of bags that belong to no one,” she said, and guessed that the bags that did show up were ones that hadn’t made it onto earlier flights.

Belmont’s luggage was eventually delivered to her apartment in New York on Tuesday, but by then she had already gone out of town again for a teaching opportunity in Texas, meaning she had to borrow spare tools and other job-related items from colleagues because hers had been stranded in Europe.

“We make our own reeds and we have these toolkits that are filled with knives and other scraping-type things that one can’t take on a plane in their carry-on,” she said. “A good amount of things I needed to travel with to Texas that I didn’t get before leaving.”

What travelers need to know

If a summer eurotrip is still on your horizon, experts and fellow travelers warn that this is the season to get to the airport early and pack your patience.

“I was surprised and impressed by the stamina of the people who were traveling with small children,” Cassell said. “Literally you were in line for hours, how did you go to the restroom?”

Headaches in Europe: Here’s how summer travelers can ‘prepare for the worst.’

Air travel in Europe is a mess: Trains are a cheaper, quicker workaround

According to data from Hopper, an online travel booking platform, Brussels and Frankfurt’s airports have had the least reliable service so far this month, with 72% and 68% of their respective flights experiencing delays.

Travel agents have told USA TODAY that those heading to Europe this summer should leave themselves plenty of extra time to account for lines and to avoid checking a bag if at all possible.

Belmont emphasized that she wished she hadn’t had to check her reed tools.

“Keep some things that you really need in your carry-on,” she said.

What are European airports and airlines doing to ease congestion?

To cope with surging demand, major airports in Europe, including Heathrow in London and Schiphol in Amsterdam, are capping capacity through the summer and asking airlines to trim their schedules and limit ticket sales.

Even with those measures, airport operators across the continent warn this summer could continue to be tough as they work on hiring more people to help process travelers through bag checks and security. 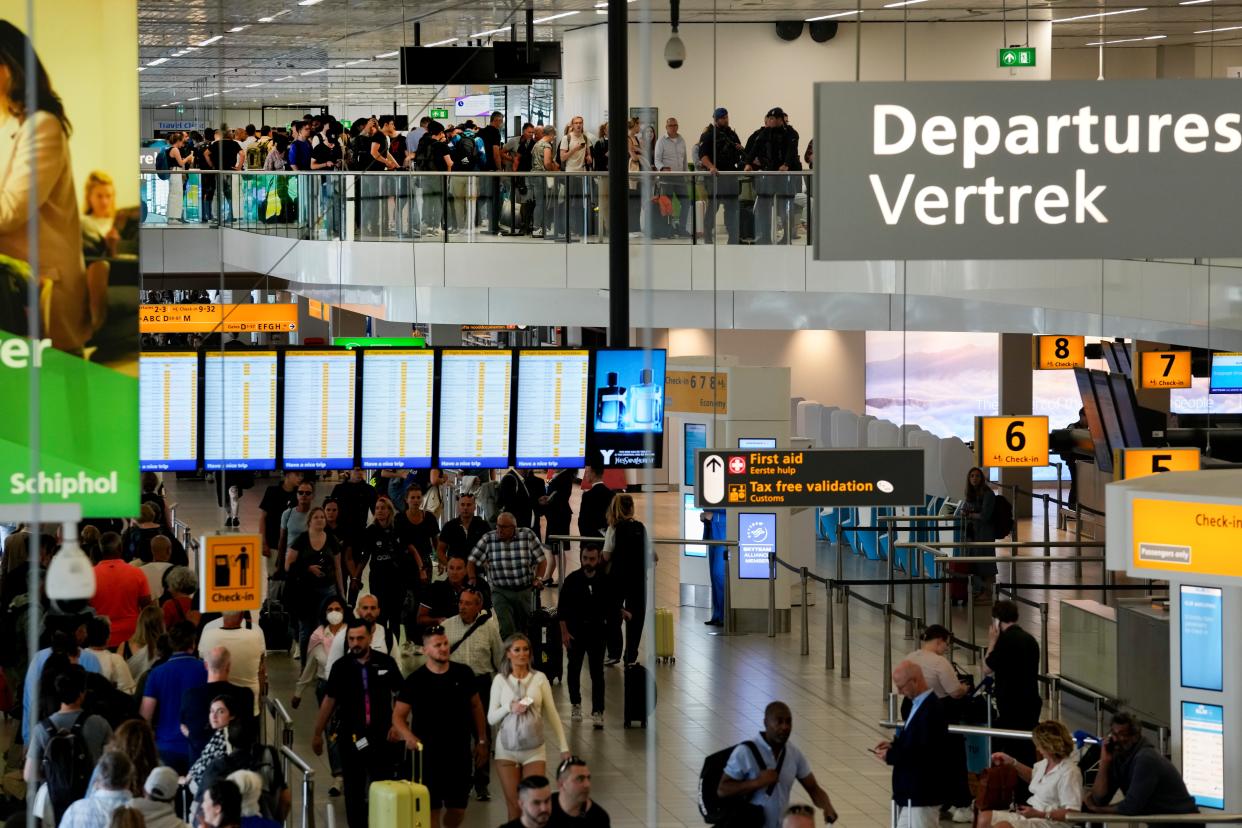 “My advice would be: practice patience when possible,” Belmont said. “This is a summer people are going to be traveling again, and the fact airlines can’t keep up with it is pretty frustrating.”

In one extraordinary sign of how bad things have gotten in Europe, Delta Air Lines’ CEO admitted during the company’s earnings call on Wednesday that they operated a baggage repatriation flight earlier this month. After canceling a passenger service on July 11, the airline used the plane to bring around 1,000 bags back to the U.S., the airline said.

When will things get better?

Airlines and airport operators are trying to smooth things out, but it’s going to take time.

Alex Cruz, former CEO of British Airways and current board member at Fetcherr, an AI firm focusing on airline pricing and revenue management, previously told USA TODAY that one of the key backlogs in Europe is getting new airport employees the security clearances they need to work at or past security.

He said things should be a little more normal by the fourth quarter of this year, and hopefully, fully back to business as usual by summer 2023.

What does a stronger US dollar mean for American travelers visiting Europe?

“Going to Europe looks a lot cheaper to Americans compared to last summer,” said Mark Zandi, chief economist at Moody’s Analytics. “With a stronger dollar that’s helping offset the cost of airfare and hotel room rates about 10- to 20% cheaper.

“If you’re thinking about traveling and have some excess savings, now is the time to go.”

Of course, the opposite is true for European travelers heading to the states.

“The U.S. looks incredibly expensive to Europeans compared to this time last year, about 10- to 15% more,” he said.