Home » World News » A humpback whale was seen surfacing near the Statue of Liberty, and the man who photographed the moment says his boat spent hours keeping it safe 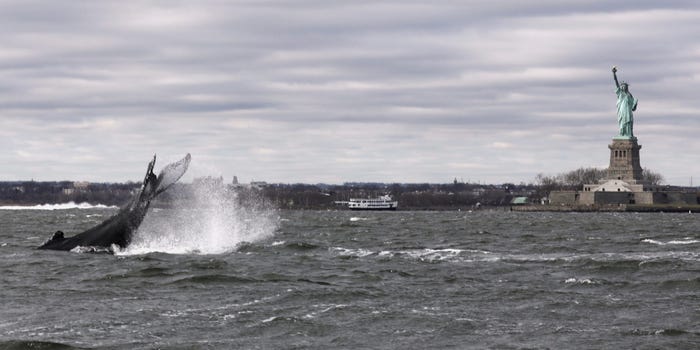 A humpback whale was seen swimming in the New York Harbor on Tuesday, and a photographer captured it surfacing in front of the Statue of Liberty.

The photos were taken by Bjoern Kils, a photojournalist who runs the New York Media Boat, which transports news crews and holds tours around New York City.

After two hours of searching, his boat first spotted the whale near Ellis Island and estimated it to be 40 feet long.

Kils, who also snapped a photo of a whale in New York Harbor in 2016, told Insider that his team spent four hours with the whale on Tuesday, partly to protect it from other boats in the water, including the Staten Island Ferry.

"It was neat. It definitely brought a bit of excitement to our day," he told Insider. "It's been a slow year for the company because of the lack of tourism. So when we know there's a whale out here, we fully document it but also provide a secure area to protect it."

He said the whale slapped its tail twice in the water as his team observed it.

The whale was likely brought into the New York Harbor by bait fish, Kils said.

"We don't believe that it's lost," he said. "There's just a lot of bait fish, millions up here in the harbor. The whale goes where food is good."

He said that because of COVID-19, there were fewer boats on the water, which gave the whale an easier opportunity to exit the harbor into the ocean safely.

The US Coast Guard confirmed the sighting to Reuters, saying it's "pretty normal" to see whales near New York.