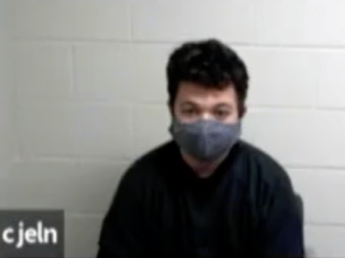 Kyle Rittenhouse — the Illinois gunman accused of fatally shooting two men and injuring a third during a protest in Kenosha, Wisconsin last month — remained silent as his attorney said he would fight the teen's extradition to Wisconsin to face murder charges during a Friday hearing.

The hearing took place virtually with all parties appearing via Zoom, including Rittenhouse, who remains in the Lake County Juvenile Detention Center.

Dressed in a dark blue prison uniform and wearing a light bluish-gray face mask, Rittenhouse was quiet throughout the hearing outside of saying, "Good Morning, your honor," to the judge.

Pierce said his firm hasn't received extradition papers from Illinois or Wisconsin and will review and challenge them once they're received. The judge said he expected Rittenhouse to be served with an extradition notice from Illinois Gov. J.B. Pritzker over the next few days and Pierce will have to file a habeas corpus writ by 5 p.m. on Oct. 8. The habeas corpus writ often is used to determine whether someone is being detained legally. Attorneys for both sides will meet on Oct. 9 to set schedules and a specific hearing date.

Rittenhouse faces multiple charges including first-degree intentional homicide and first-degree reckless homicide, as well as a misdemeanor charge of possession of a deadly weapon.

The 17-year-old drove to Kenosha from his home in Antioch, Illinois to protect local businesses from looting amid unrest ignited by the police shooting of Jacob Blake. Rittenhouse, who is seen in a video firing an AR-15 style rifle into a crowd of people, is accused of fatally shooting protesters Joseph Rosenbaum and Anthony Huber and injuring Gaige Grosskreutz on Aug. 25.

His detractors see him as symbolizing the type of domestic terrorism they say is increasing as calls for racial equality grow louder and protests against police brutality spread around the country.

However, Rittenhouse 's gun-enthusiasm, aspirations to be a law enforcement agent and support for President Donald Trump has prompted many to hail him as a patriotic hero who wanted to help maintain law and order amid chaos in Kenosha.

Trump, who visited Kenosha the week following Rittenhouse 's arrest to view the devastation from the looting and riots, declined to condemn the shooting and suggested that the shooter looked like he was "trying to get away."

Rittenhouse's supporters just aren't rallying to his defense on social media. Some are donating as little as $5 or $20 to his legal defense fund and it's adding up.

His attorney's Los Angeles-based law firm, Pierce Bainbridge, created the nonprofit #FightBack Foundation that's raised $1.8 million of a $5 million goal so far. A fundraiser on the Christian fundraising platform GiveSendGo said it's received $517,804 in donations toward his defense, surpassing the stated goal of $500,000.

It seems that Rittenhouse may not have been able to afford his defense team had it not been for this type of financial support.

He and his two sisters were raised by his single mother, Wendy, who reportedly works as a nurse's assistant. In March 2014, Wendy Rittenhouse filed a child support claim against his father, Michael, for him, his now 20-year-old sister and another sibling who turns 17 in December, according to court documents. Michael Rittenhouse is ordered to pay child support until May 31, 2022.

Staffing agency QPS Employment Group Inc. in Brookfield, Wisconsin was listed as his father's place of employment in those 2014 documents.

Kenosha County Sheriff's Office told Insider last month that it would be prepared for any potential unrest that could erupt relating to the outcomes in the Rittenhouse case and Blake shooting case.