Afghanistan’s only female tour guide has told of the terrifying ordeal she faced trying to escape the war-torn country, with people killed and beaten inside the airport during the stampede to leave.

Fatima, who is concealing her surname, was told to leave the city of Herat where she was living by the UN security council in early August as the Taliban moved in.

It was feared that she could be a target for the Taliban as the story of her success in the country’s tourist industry was published around the world.

The 23-year-old, who started guiding professionally in 2020 after studying journalism at the Herat University, travelled to Kabul in a bid to catch a flight to safety.

But speaking to MailOnline, Fatima said there she witnessed things that will scar her forever. 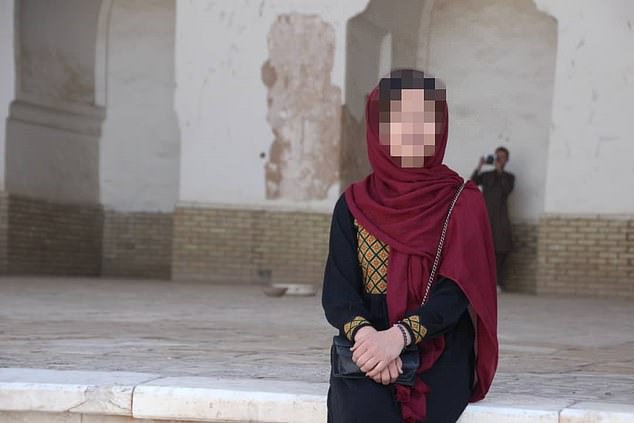 Fatima, 23, started working as a tour guide last year for a UK-based company

Stopping now and then to recompose herself, she recalled some of the atrocities she saw.

‘When we first attempted to get into the airport it was so crowded,’ she said.

‘Two times one of the Taliban members held the gun straight to me and told me ‘go away otherwise I will kill you’.

‘There was nowhere to go. I felt then Afghanistan was not a place for me to live anymore. I felt we had been sold to terrible people where their joy and happiness is in killing and fear. That was a very shocking and scary moment for me to see this and realise everything we had worked for many years was gone.’

Fatima attempted to get into the airport twice with a group of around 20 other people, who included fellow tour guides, but they found the situation was too dangerous and they decided to leave ‘rather than die trying’. 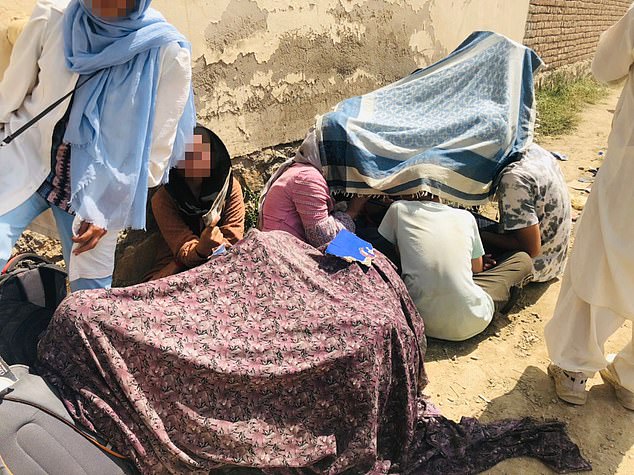 Fatima attempted to get into the airport twice with a group of around 20 other people. Pictured, the group waiting outside the airport

Feeling downhearted, Fatima’s group went to seek shelter from the heat and found themselves in front of a garage.

While sitting there, a man introduced himself and said he knew the Taliban and he could get them into the airport if they paid him $300.

The group decided to pay half the money upfront and the other half on completion of the deal.

The group were led by the stranger to some gates where there were many foreign soldiers and after two hours or so, they made contact with an Italian solder who asked for their passports as their name had been put on the Italian flight list.

Fatima found out to her surprise and relief that she was actually on five flight lists as the UK-based adventure travel company she works for, Untamed Borders, had been working to get people out, and she also had other supporters routing for her.

Finally, the group got into the airport where they waited for their flight to be called. They were forced to huddle together as a group on the airport floor, while chaos continued to roll around them.

One of the most harrowing things Fatima saw was a man who was a journalist being grilled by the Taliban. She explains: ‘The Taliban took all of his documents and were hitting him and I am sure they went on to kill him.

‘I also saw a woman who had lost two of her children and the gunshots were so loud.’

After two days of sleeping in the airport, Fatima and her group were finally called forward to board the Italian flight, which went via Kuwait.

It was Fatima’s first time out of Afghanistan but she said the kindness from the Italians helped to put her at ease.

On landing at a location close to Milan, Fatima and her group were provided with shelter, medical assistance and ‘such a warm welcome that made me really happy’. 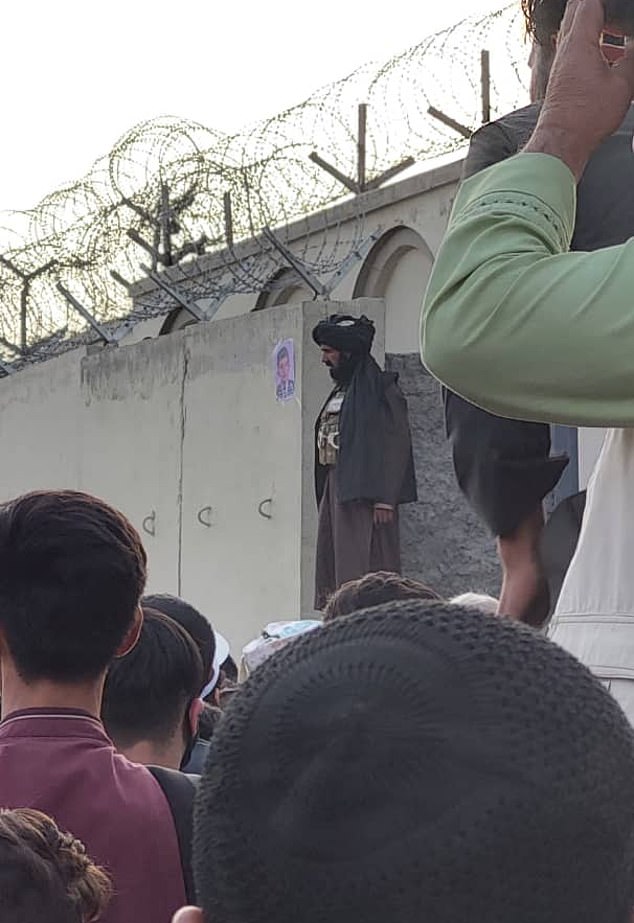 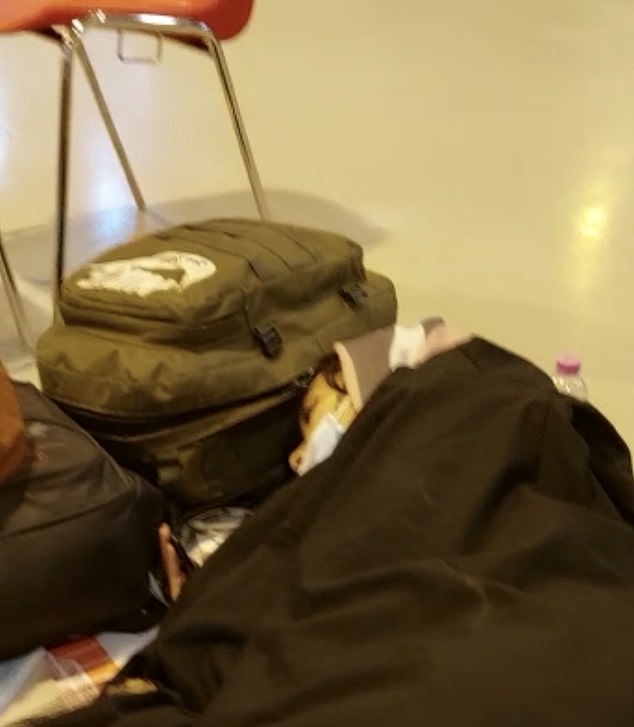 Adhering to Covid-19 rules, the Afghan refugees arriving into Italy had to quarantine for 10 days before being released on proof of a negative test.

While she is sad to have left many of her loved ones behind, Fatima says she still has hopes and dreams and she wants to get her career back on track.

Her introduction to guiding, she explains, came as an eight-year-old when she was forced to work as a shepherd to help support her family. She found herding the livestock was something she enjoyed, a little like herding humans around cities and sites.

Reflecting on her winding career path, she says: ‘I was born in one of the most deprived and outlying areas of Afghanistan called Lal Sar Jan-gal, which is a district in the Ghor province.

‘Although it was a tough experience; I realised guiding sheep and cows to find their food and to help them enjoy life, gave me great pleasure.

‘It might sound strange but running on those high hills after animals was where I was first introduced to guiding and leading a group.’

After ‘much fighting’, Fatima managed to persuade her family to let her go to school. She is one of seven children and her sisters were married at age thirteen, but she refused to conform and went about pursuing education instead.

The first school she attended was a tough place to be as the building ‘had no walls and the scorching sun meant it was extremely hot inside and the seats felt like they were burning you’.

Despite these conditions, Fatima learned basic reading and writing alongside shepherding. After her family moved to Herat, Fatima couldn’t afford to go to school so she taught herself at home.

She also started learning English thanks to an organisation that offered free EFL classes for refugees in the area. After ‘three years of hard work and perseverance’ she was selected as a teaching assistant to help others, earning $50 per month. 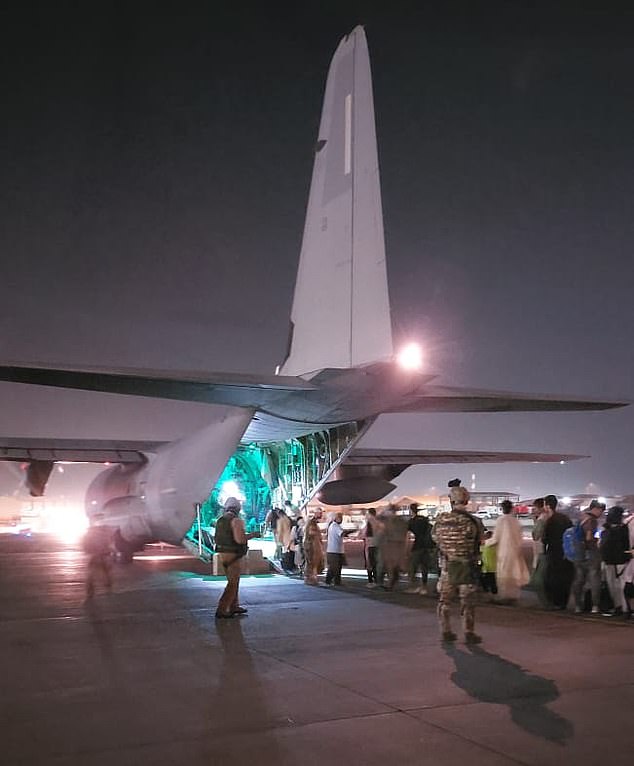 Eventually, she was able to pass an entrance exam to attend Herat University to study journalism. While she was researching historical places around Afghanistan as part of her studies, she started recording her findings and launched a successful travel blog.

Her insightful posts were picked up by Untamed Borders, which runs trips to off-the-beaten-track destinations, and she started working with the company last year.

One of her favourite places to take visitors was the mountainous area of Bamyan – which she describes as ‘truly breathtaking’.

Looking ahead, Fatima does not see Afghanistan as somewhere she could ever return to while the Taliban are in power.

She muses: ‘Now I see Afghanistan as a prison to the women and they have lost all of the achievements they fought for.

‘Women are now like corpses and dead bodies there. All of the education places and hospitality businesses belong to men and all of the women, they are just housewives for their husbands and not allowed out without the permission of men.

‘They have to just sit at home and even how they dress is decided by the men.’

Now thousands of miles away from home, Fatima aims to learn Italian and teach the Afghan refugee children English.

She concludes: ‘I love tourism and now I hope to lead tours here, I will keep my hopes and dreams alive.

‘I will try my best to get a job here and empower myself. But my biggest message to the world is not to give up on Afghanistan, I want to show my country to the world.

‘Behind the bloodshed there is so much beauty there, with lots of historical places, delicious food and amazing nature. Let’s hope this doesn’t die.’

To help support Fatima and other Afghans in the tourism industry, please donate via fundly.com/support-afghan-guides-and-fixers