Age no barre as seniors reach out at ballet class

Liane Arno started taking ballet lessons aged 60 because she felt she was getting creaky in the bones and gardening wasn’t strenuous enough.

Six months on, a weekly classical dance class has given the Wonthaggi retiree better flexibility and balance, and one unexpected benefit: “I can now put my knickers on standing up, without sitting on the bed.”

Arno lured her husband, Matt Stone, 70, to the free classes for seniors by telling him it was a stretching class.

He is now hooked, wearing ballet tights, ballet shoes and doing arabesques and deep bends at the barre. He even does a modest lift of a small classmate. “I just love it,” Stone says.

For inspiration, the students can look to their 80-year-old teacher, Wendy Crellin, who commands the room with her poise and grace.

Her classes are held at the former Wonthaggi state coal mine’s century-old Rescue Station, now an arts centre, of which she is president. She uses piano and orchestral music, and French terms for moves, such as tendu, plie and glissade. 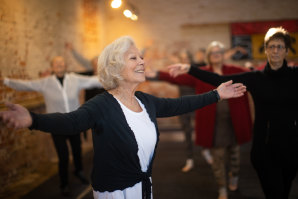 Crellin trained in Melbourne as a teenager with celebrated dancers and choreographers Edouard and Xenia Borovansky. She danced with the National Theatre before leaving to teach physical education in schools.

She married John Crellin, a surgeon, and in 1973 they moved to Wonthaggi, the town of her birth, where in the 1940s her father had been a miner, probably doing safety training in the same Rescue Station.

Crellin ran a ballet school in a Wonthaggi church hall for a few years in the 1970s before closing it to focus on supporting her husband and three children. 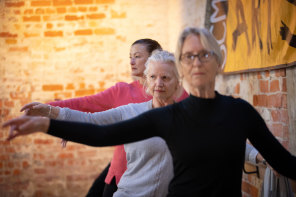 Pupils at the Rescue Station arts centre train at the barre and learn classical movements.Credit:Simon Schluter

She says she felt “quite lost” after her husband died five years ago. But when she mentioned to her daughter, Miranda Donald, that she would love to teach dance again, she replied: “Well, what is stopping you?”

The classes are free for people aged 60 and over, of all shapes and sizes. Four people came to the first Barre Exercise Ballet Class for Seniors in July 2021 and 30 now attend two classes.

Crellin says it feels wonderful to be back in ballet class, helping others learn, get fit and make friends. “I get a huge amount of pleasure and joy from going there each week,” she says.

One woman told Crellin the class was the highlight of her week.

As well as joy, ballet gives Crellin discipline. “You have to do your preparation,” she says. “You can’t just turn up to class at quarter to 10 and open the doors and put on your ballet shoes, and ‘here we go’. I’ve got to think about what the class will be like this week, what we have to advance on.” 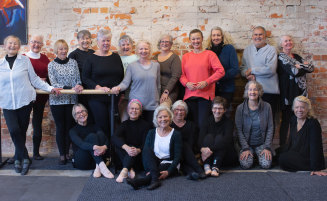 Student Ann Brown, 68, a retired teacher from Coronet Bay, had never done ballet aside from “one term when I was in grade three”.

A friend dragged her to Crellin’s class, and she says it has helped her back problems “enormously”.

“I’ve gone from having back pain nearly every night to hardly any,” she says. “It’s wonderful and I love it.”

Of Crellin, she says: “We all treasure her. We love her to bits because she gives us so much.”

Felicia Di Stefano, 73, of Ryanston, says that growing up in Poland and Melbourne, her family couldn’t afford ballet classes.

“I love dancing, and Wendy makes it so much fun,” she says. “She’s such a giving person; she won’t take anything in return. It brings a lot of joy to my life.”