‘Can we just talk about Katie Boulter today?’: British tennis star’s Australian boyfriend Alex De Minaur wins over Wimbledon crowd with adorable shout-out to his girlfriend after dumping another Brit hopeful out of tournament

The 19th seed managed to win over the crowd on Court One after defeating British hopeful Jack Draper in a four-set tussle last night.

Speaking on court afterwards, De Minaur, who was watched by Boulter, told the BBC: ‘Before we talk about my match, can we just talk about Katie Boulter today? I mean, she had a pretty good win herself.’

He went on: ‘I’m extremely stoked to get this win. It was a battle out there. Jack’s a hell of a competitor, hell of a talent, and he’s got a very bright future ahead of him.’

Sydney-born de Minaur, 23, and Leicester girl Boulter, 25, who have been dating for more than a year, will both be in action at SW19 again tomorrow.

Boulter tearfully dedicated her stunning Wimbledon win over last year’s finalist Pliskova to her grandmother, who died on Tuesday – the same day she rompted to her first victory of the tournament by beating France’s Clara Burel.

The rising star – who has posed for Vogue and often shares glamorous snaps on her Instagram – saw off the Czech in three action-packed sets on Centre Court to make the third round of a Grand Slam for the first time.

Among the relatives watching Boulter in the stands was her mother, Sue Boulter, was also seen beaming with pride as she watched her daughter triumph over the Czech Republic’s Pliskova from the player’s box. Her grandfather, who invented the anti-theft tags found on clothes in shops, also attended yesterday’s Centre Court clincher. 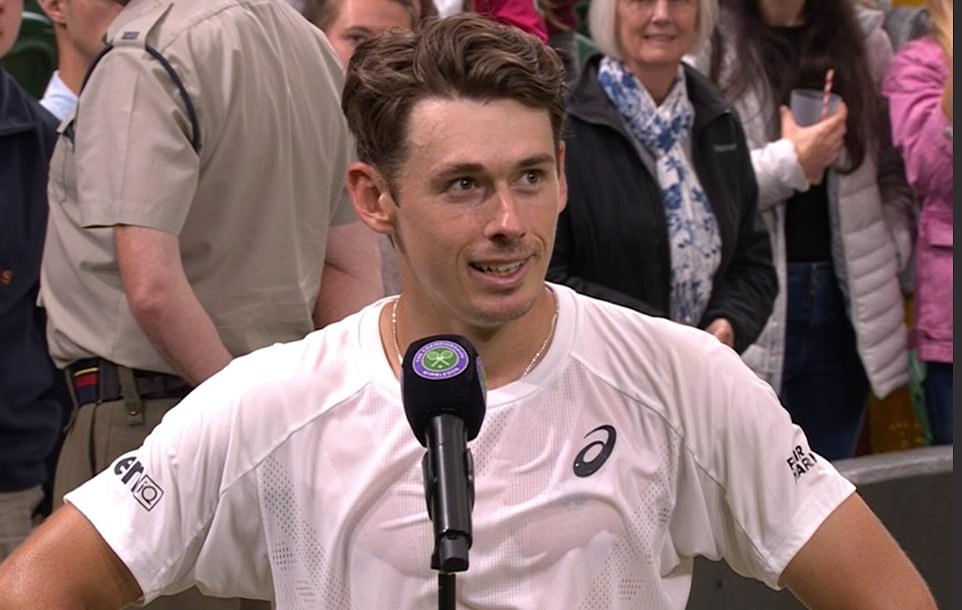 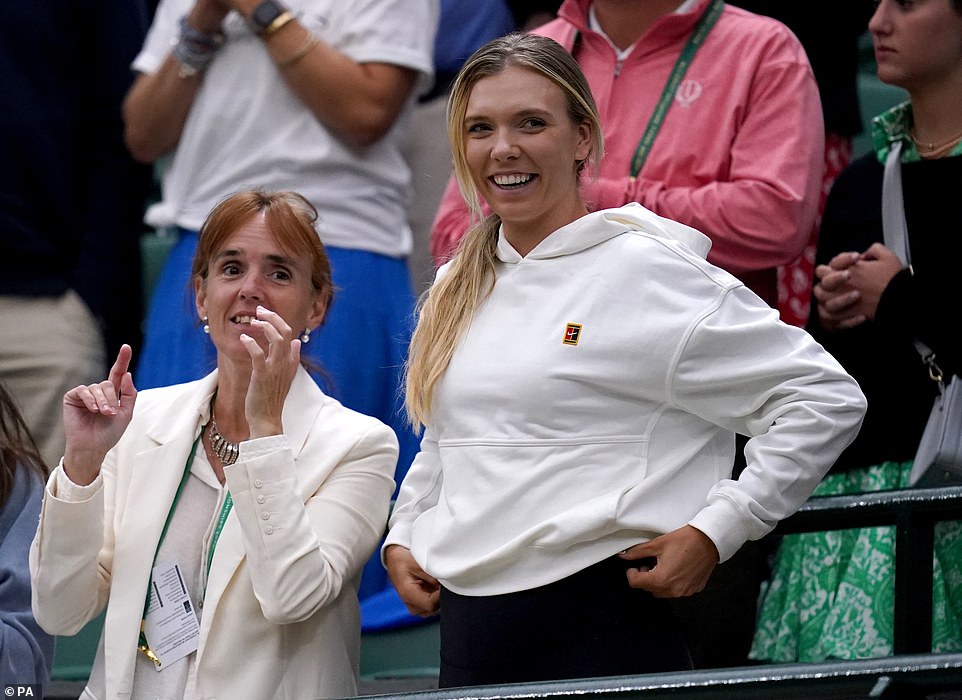 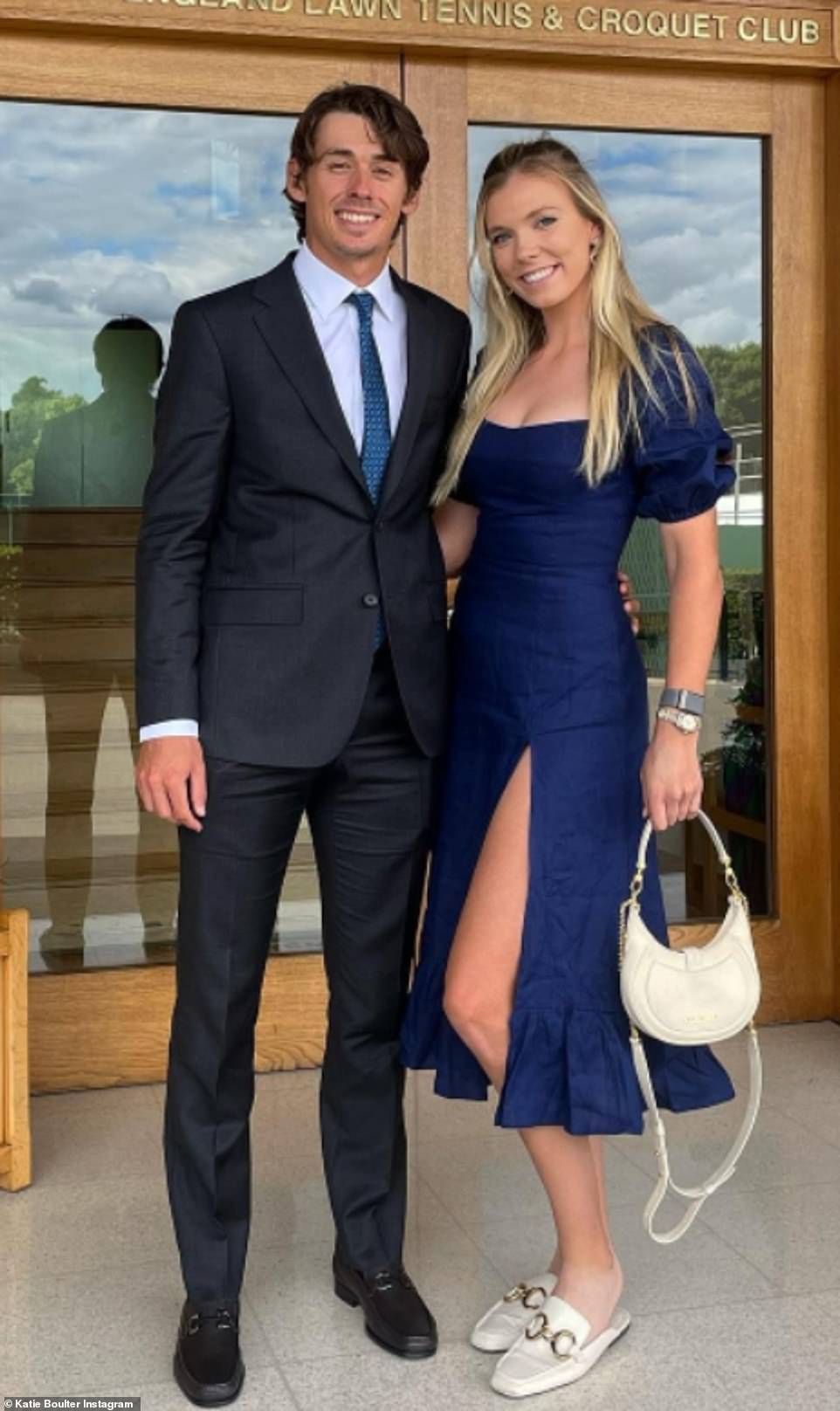 Pictured, Boulter and her Aussie star boyfriend Alex de Minaur at an event at Wimbledon in May 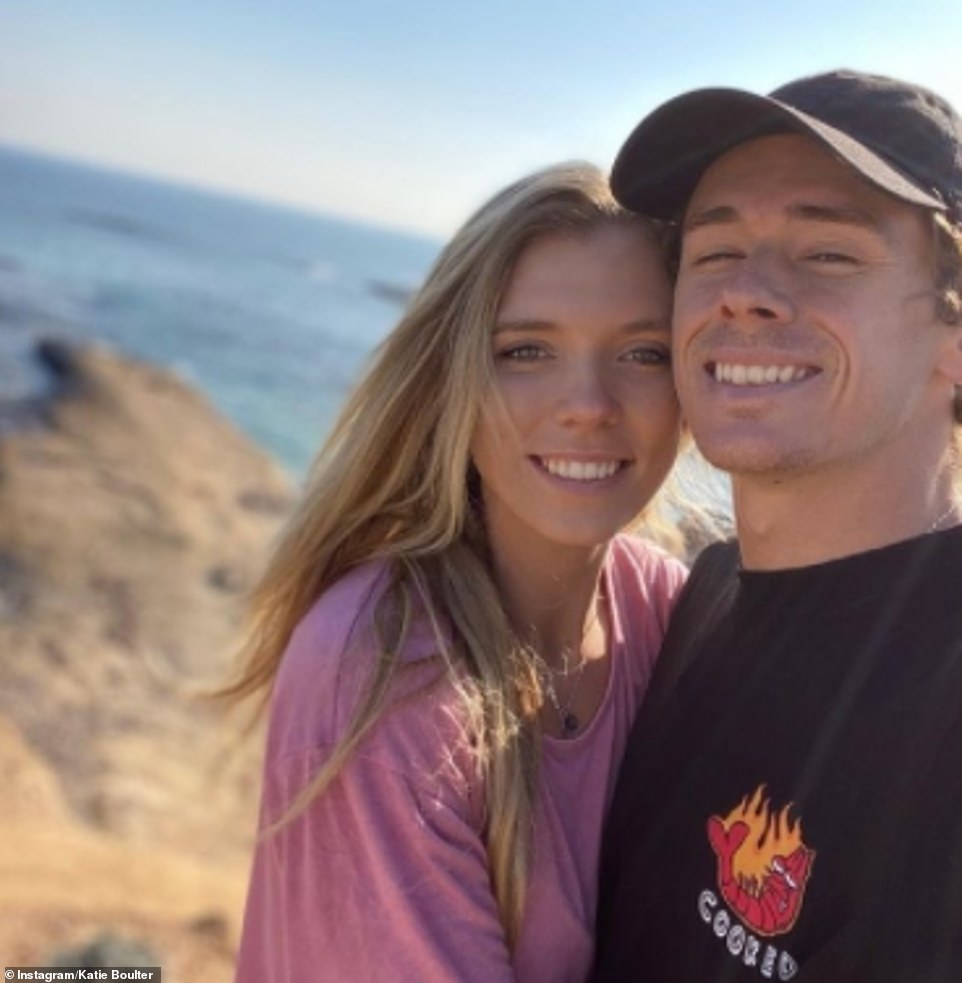 On International Women’s Day 2021, De Minaur made it official with a gushing Instagram post, alongside a photo of the pair 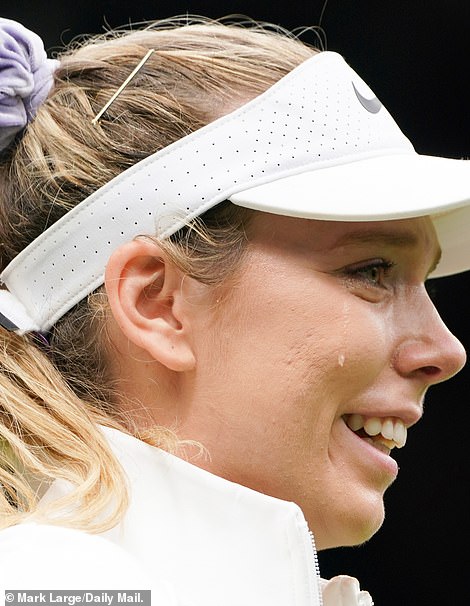 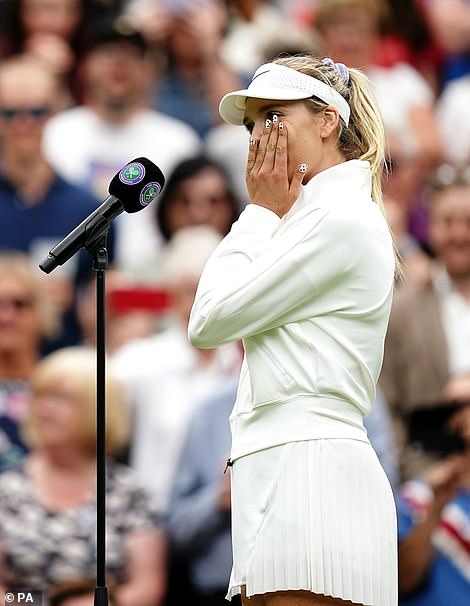 The new golden girl of British tennis! How coach’s daughter Katie Boulter, 25, has gone from career-threatening injury to making it to the third round at Wimbledon – and has found love with fellow player Alex de Minaur

She was dubbed ‘Britain’s new rising tennis star’ last year when at Wimbledon , and Katie Boulter appears set to put on an equally impressive display this summer.

The world number 118, from Leicester, who suffered a back injury in 2019, beat Frenchwoman Clara Burel with ease in her first match of the tournament in a comfortable 7-5 6-3 win.

She has now also reached the third round at the All England Club for the first time this afternoon after winning against World No 6 Karolina Pliskova in a tough second round clash.

Tall and with easy power, Boulter, 25, who spent part of the lockdown during the coronavirus pandemic volunteering for Age UK, often shares glamorous snaps on her Instagram of her adventures training and competing around the world.

Meanwhile, the stunning blonde, whose mother Sue is a former Tennis coach, confirmed in 2021 that she is dating top-ranked Australian tennis star Alex de Minaur, who has a career-high singles ranking of No. 15.

Boulter, who grew up in the upmarket Leicestershire village of Woodhouse Eaves, started playing tennis aged four, and went on to represent Great Britain three years later in a junior competition.

She has previously said that when she was younger, beating her older brother in practice games was her motivation.

In 2011, aged just 14, she reached the final of the Orange Bowl in America, one of the most prestigious junior Tennis tournaments.

Before her tennis career, she played the piano and also has a keen interest in fashion, having even made an appearance in Vogue magazine in 2018.

She is also an avid fan of Leicester City Football Club, sharing snaps online of her attending games with her grandfather Brian Gartshore, who is in his 80s and invented anti-theft tags to prevent the shoplifting of clothes and other items.

Boulter reached the world ranking of 82 before she was struck down with injury in April 2019 when she was part of Great Britain’s Federation Cup team.

Following the team’s victory over Kazakhstan she suffered a spinal stress fracture, side-lining her for the rest of the year.

Her rehabilitation was compounded by her battle with chronic fatigue, which she was diagnosed with as a teenager.

However this year she is back at Wimbledon, where her beau Alex is also competing.  ‘There’s no place like home. Grateful for the opportunity,’ Katie said of her return to SW19.

‘I actually had a phone call from my grandpa the night before I played,’ said the 25-year-old, who is through to the third round of a grand slam for the first time.

‘He didn’t mention anything, but he kind of gave me the inkling that it might be coming. I didn’t know anything until after my first match where my mum basically pulled me aside and told me after the first match.

‘It’s been a tough few days for sure. I’ve tried to kind of get my emotions out and deal with the situation, try and keep my head on the tennis. I was lucky because my grandpa managed to come down from Leicester, so we could keep him company and keep supporting him at the same time.’

Boulter’s family lived the match with her from the player box, and she said of her grandmother: ‘Her favourite tournament was Wimbledon. That’s why it’s a special one for me. She’d watch every single match that was on the TV.

‘She’s always someone who’s been right into tennis from stage one. She lives just down the road from the tennis club. That’s the tennis club that I started playing tennis at.

‘Leicestershire is very close to my heart. I’ve spent a lot of time on the courts there with my grandparents and my family. It’s a lot of memories. Ones I cherish.’

At 5ft 11in and with easy power, Boulter has risen as high as 82 in the world and looks to have the most potential of the younger generation of Brits.

The player, who spent part of lockdown volunteering for Age UK, often shares glamorous snaps on her Instagram of her adventures training and competing around the world.

Boulter reached the world ranking of 82 before she was struck down with injury in April 2019 when she was part of Great Britain’s Federation Cup team. Following the team’s victory over Kazakhstan she suffered a spinal stress fracture, side lining her for the rest of the year. Her rehabilitation was compounded by her battle with chronic fatigue, which she was diagnosed with as a teenager.

But in an interview last year she said she feels like ‘I’ve officially conquered it’ and revealed how she is ‘as strong as I have ever been physically’.

Boulter used her time during 2020’s UK lockdown to complete work with Age UK, a charity for the elderly, where ‘there was one elderly lady I called every week so I could check that she’s OK and see if she needs anything doing’.

The home crowd roared in support of the rising star, off the back of the double disappointment of Emma Raducanu and Andy Murray crashing out of SW19 early.

She said: ‘I’ve got absolutely no words right now. The crowd was unbelievable, thank you so much for getting me through that. I’m going to get emotional. My gran passed away two days ago so I’d just like to dedicate that to her today.

‘Honestly, it’s a dream come true for me. I’ve hopefully got many more matches to play and if I’ve got you guys behind me for those, hopefully I can go a long way, so thank you very much.’

Wimbledon fans broke down in tears and roared in support for Boulter as she won her second-round singles game, and revealed that her victory has sparked more excitement for team GB in the tournament.

Samia Gomez, 40, a sports therapist based in Isleworth, south-west London, said she cried when the tennis star spoke about her grandmother.

Speaking alongside her husband, Paul Morrison, 42, she said: ‘I cried at the end when she said her grandmother died just two days ago. I’m rooting for Iga Swiatek and (Rafael) Nadal, but I think we need to support all the British players.

‘We are in the UK, this is a British grand slam, and Katie Boulter shows we’re here to see really true champions.’

Ruth Stevens, 50, said that as someone who does not usually follow tennis, hearing Boulter open up about her family tragedy piqued her interest in the star. 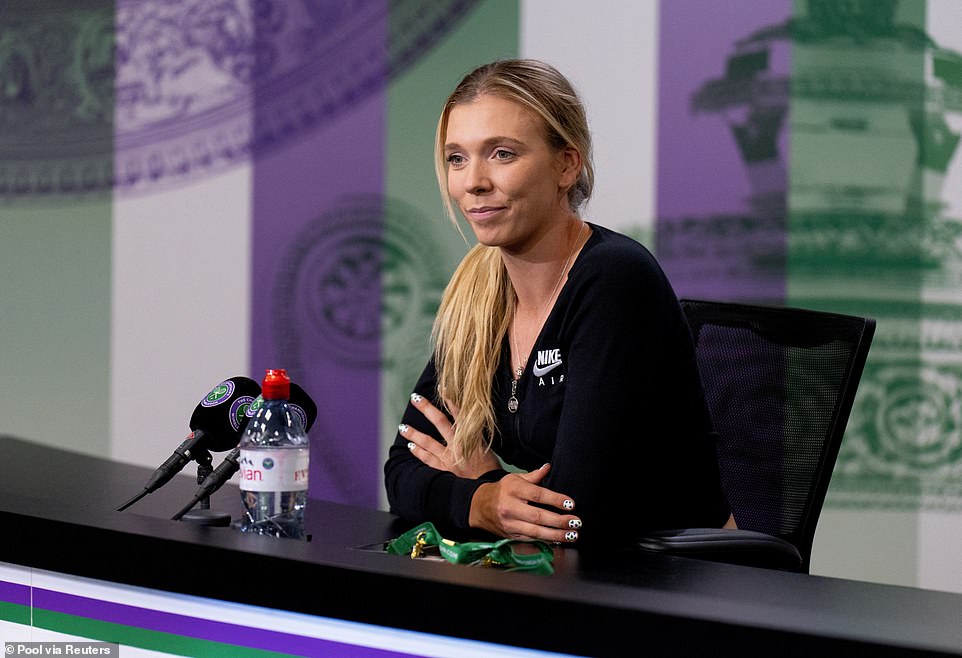 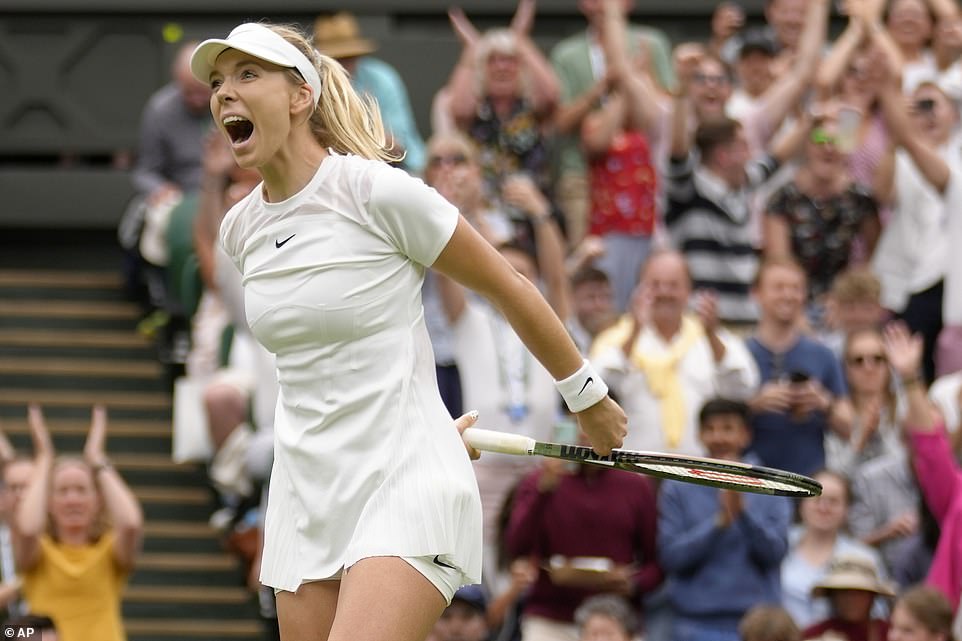 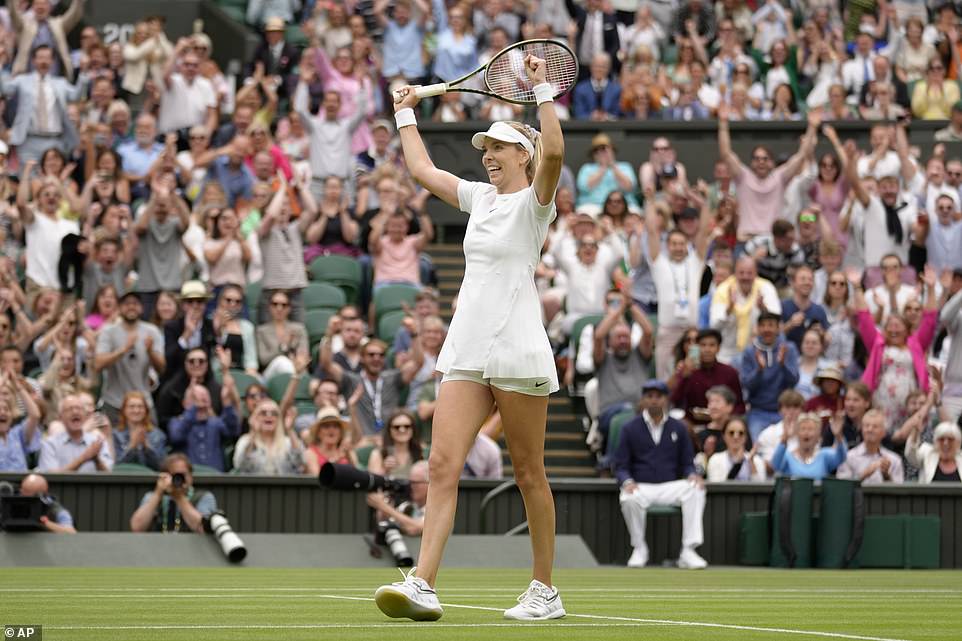 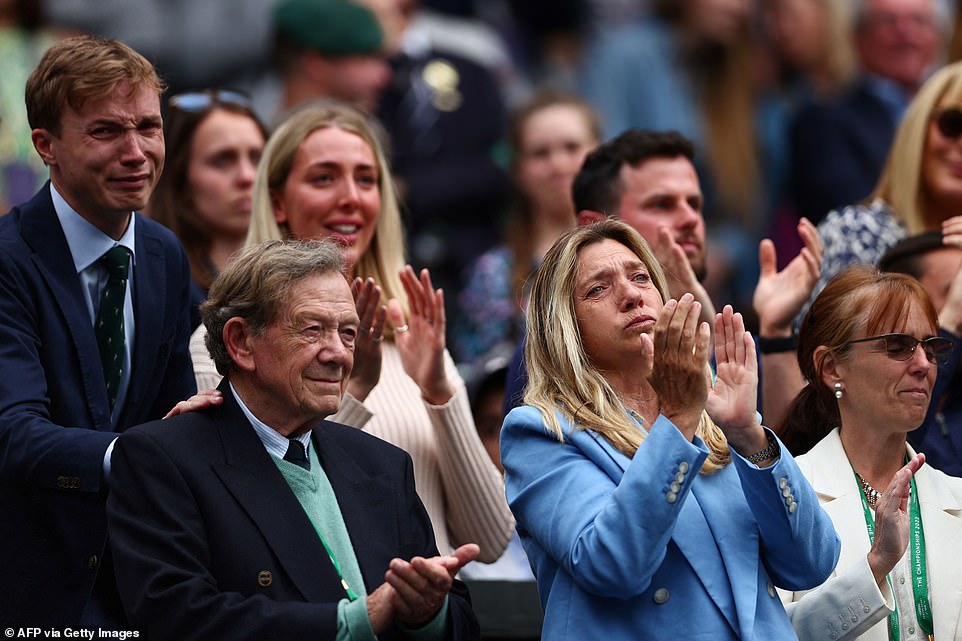 Boulter’s emotional relatives including her mother Sue Boulter, centre, as Boulter dedicates the victory to her grandmother 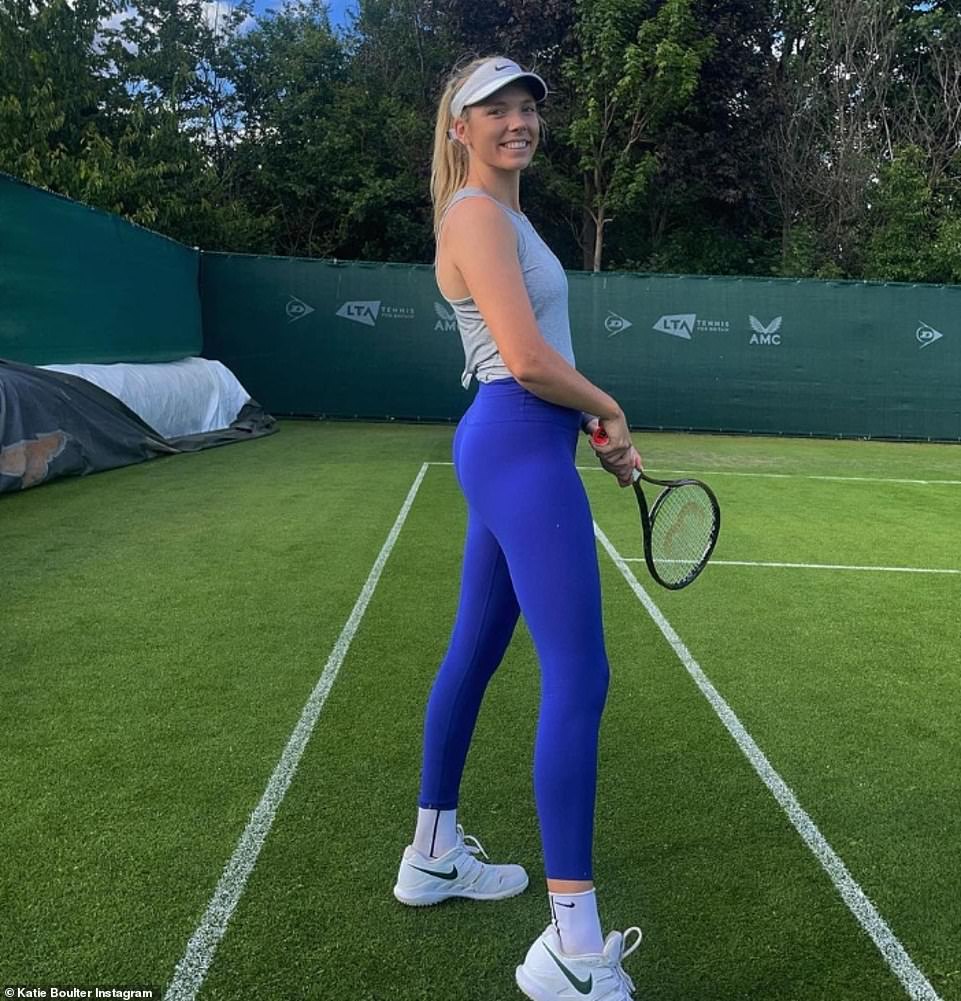 Back on court: Boulter reached the world ranking of 82 before she was struck down with injury in April 2019 when she was part of Great Britain’s Federation Cup team. Pictured, Katie in a training snap shared on Instagram

Strike a pose! Katie, who has recovered from injury, shares snaps of her jet-set life on Instagram

Ms Stevens, a special needs case officer living in Crystal Palace, south-east London, watched the game on Centre Court alongside her school friend and tennis fan Jennifer Morrison, 50, an artist based in Fulham.

She said: ‘I’m a tennis novice but it was really exciting. I got more involved when she told her story afterwards.’

When asked if hearing Boulter’s story made her more interested in the game, Ms Stevens said: ‘Absolutely, hearing her backstory definitely got me interested. I’ll be watching out for her now.’

Ms Morrison, who was wearing the Wimbledon colours of purple and green, said ‘there was a big roar’ from the crowd when Boulter won.

‘It was really incredible, I wasn’t expecting her to do so well,’ she said. 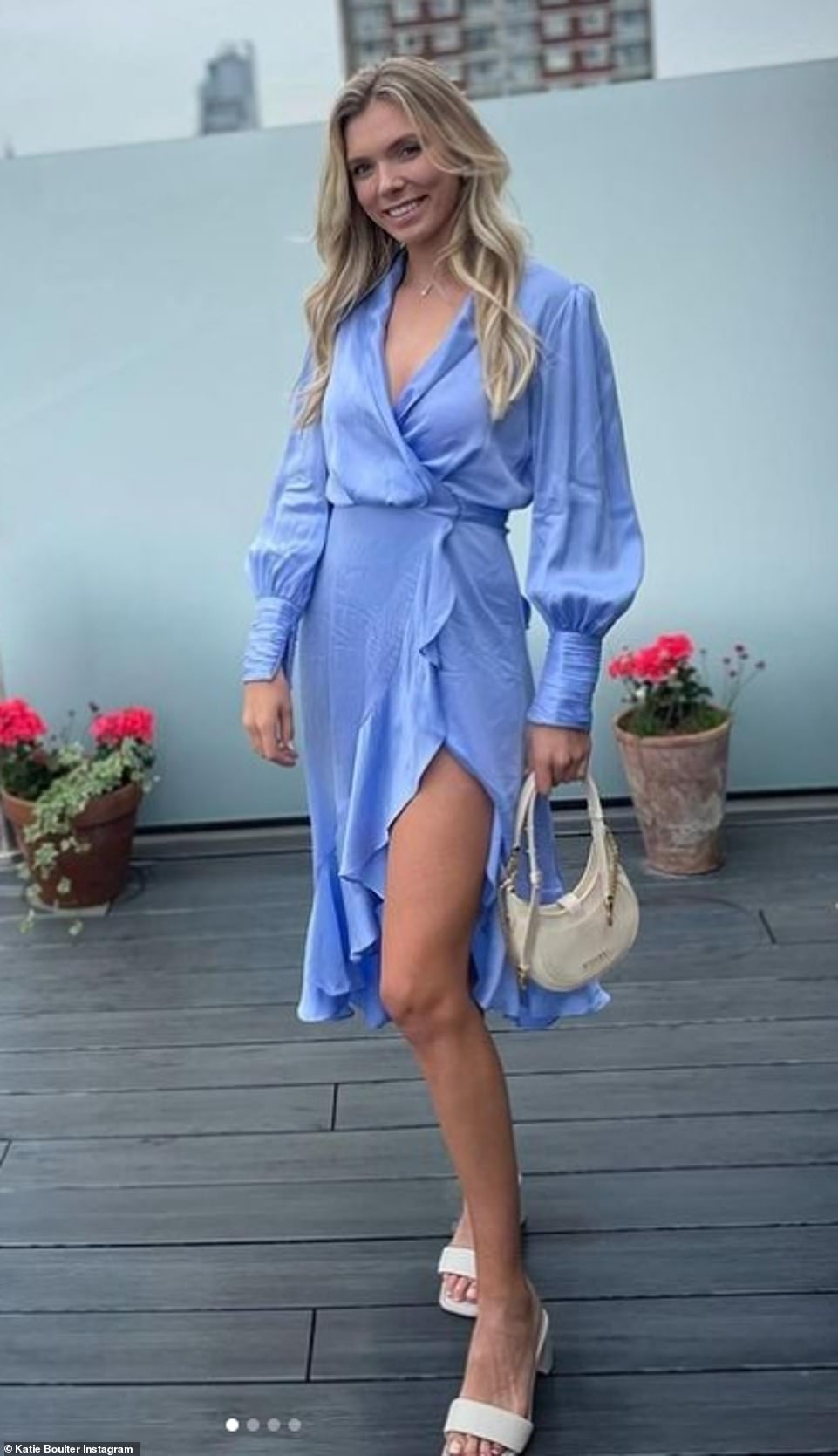 She was dubbed ‘Britain’s new rising tennis star’ last year when at Wimbledon, and Katie Boulter (pictured) appears set to put on an equally impressive display this summer 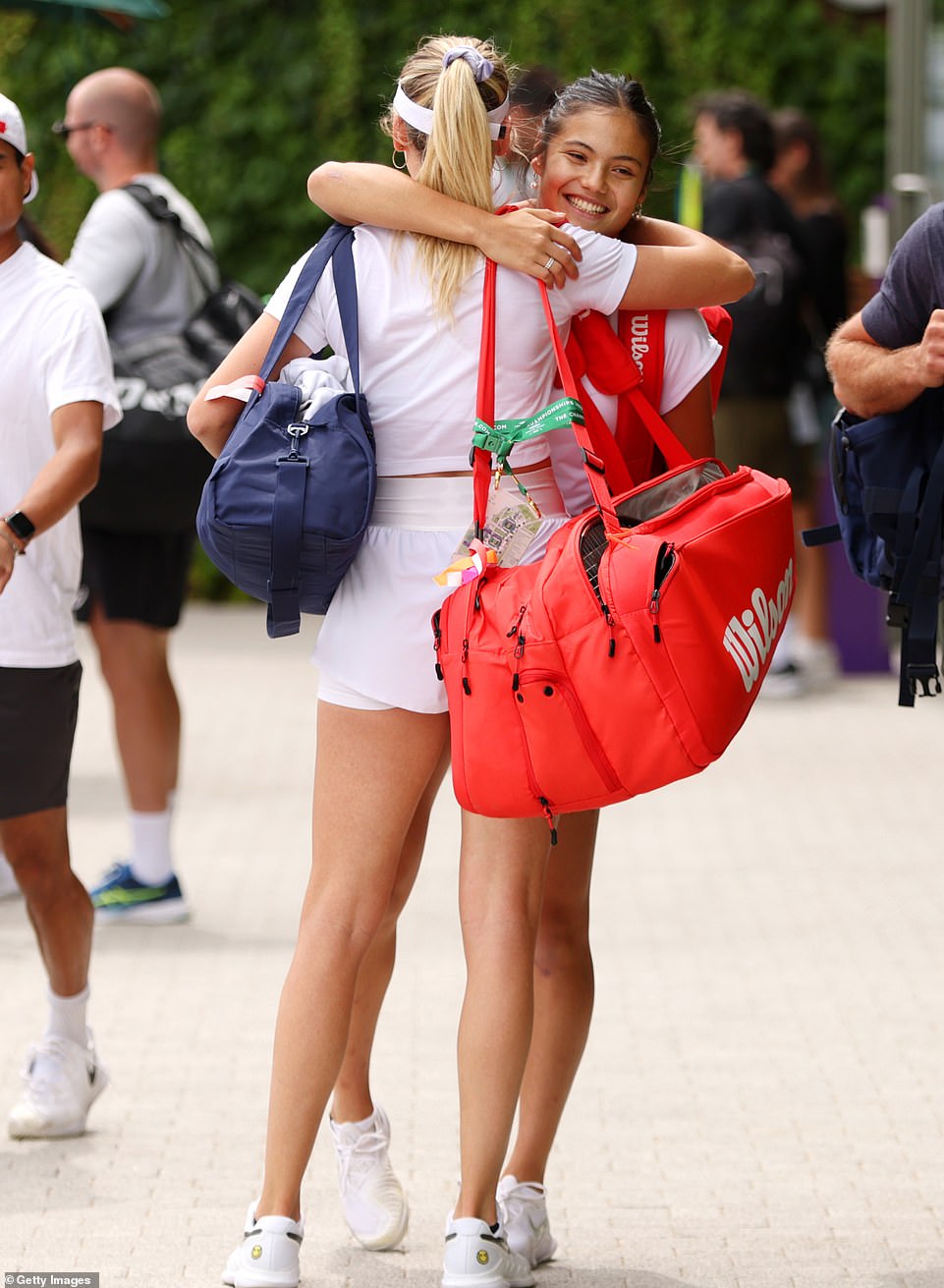 A hug for Emma! Katie greets Emma Raducanu ahead of a training match at Wimbledon

‘I think it’s great to see these players who are not really as well known coming forward, and great for the women as well, it’s wonderful.’

Josh Moses, 33, a golf manager from Guildford in Surrey, witnessed the win from the side-lines with his girlfriend Stephanie Bridges, 33, and said they felt Boulter’s passionate feeling.

He said: ‘We got very emotional and very stuck into the game, and we felt her emotion as well, so it was really special.

‘You could see that every point that she won, it motivated her even more, you could see what it meant to her and the crowd got more and more behind her as well.’

Ms Bridges added: ‘It was really special to see a Brit win at home – really good. She’s one to watch.’