An all-women team will lead the Victorian Farmers Federation for the time since the lobby group's formation more than 40 years ago.

South Gippsland vegetable and livestock farmer Emma Germano was elected to the top job on Thursday afternoon and Werribee South egg farmer Danyel Cucinotta was voted in as vice-president. 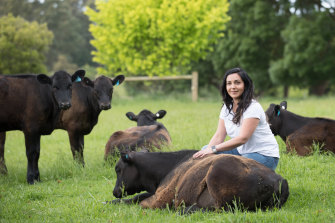 Mirboo North farmer Emma Germano is only the second woman to be elected president of the Victorian Farmers Federation. Credit:Jason South

Both leaders say they want to expand the membership of the federation and ensure more diverse voices are heard from within the farming sector.

Ms Germano said her election showed that farmers had chosen progressive and positive leadership and were looking for fresh ideas to take the agriculture industry forward.

"It's really apparent people are looking for positivity and hope for the future," she said. "The organisation has chosen a completely new face for its leadership." 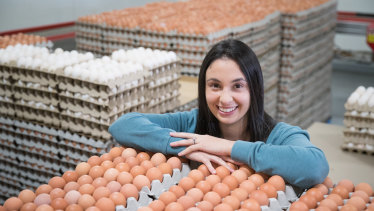 Ms Germano set a goal of doubling the federation's membership, which is currently about 6000, by the end of her two-year term. "I think that's possible."

The pandemic has raised major challenges for Victorian farmers as the suspension of international flights resulted in seasonal labour shortages for picking fruit and vegetables.

Tackling that labour shortage will be among Ms Germano's priorities.

She said the government should establish a COVID-19 bubble with Pacific Island nations so that seasonal workers could return to Victorian farms.

But the agriculture sector also had to get better at conveying the benefits of farm work to attract Victorian workers.

"It's really wonderful to be out in nature and producing food," she said.

Ms Germano defeated for the top job Leonard Vallance, who farms grain, cattle and sheep at his property near Ouyen.

She is just the second woman to lead the Victorian Farmers Federation. Heather Mitchell was the first female president.

At 28, Danyel Cucinotta is the federation's youngest ever vice-president.

Ms Cucinotta said she hoped her election would encourage other women and young people working in agriculture to take on leadership positions. "We have different ideas. We see things differently," she said.

Ms Cucinotta is a third-generation farmer who works on her family egg farm at Werribee South.

She said farmers needed to better impart a modern picture of farming to consumers, including advancements in technology and animal welfare.

"New innovation is coming all the time; we're just forgetting to tell our consumers it's happening on farms."

That applies to her farm, which produces cage eggs rather than free-range. "We see a future in cage eggs," she said. "There's a market for it. Otherwise I'd be out of business a long time ago."

Ms Cucinotta completed a double degree in business management after leaving high school and also worked in hospitality, not intending to pursue a career in farming.

"I always said I'd never come back to the farm," she said. "It's hardly glorified."

But Ms Cucinotta decided to return to farm work with her younger sister and now sees her long-term future in farming.

"I really love my day job."