When Jacinta Allan was elected for a second term in 2002 as the MP for Bendigo East, she became a minister at age 29. She was the youngest minister in the history of the state.

The Age pointed out at the time that just seven years earlier Allan had been bagging groceries part-time at Coles in Kangaroo Flat, near Bendigo. 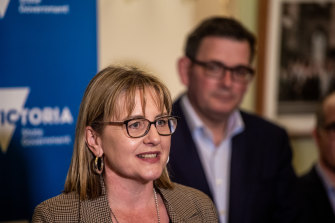 Jacinta Allan is likely to become the new deputy premier, which will make her the heir apparent to Daniel Andrews.Credit:Justin McManus

On Saturday, the 48-year-old will almost certainly become deputy premier.

It will put Allan on track, if the cards fall her way – and the way she and Premier Daniel Andrews want – to one day be only the second female premier in the state’s history. Andrews has long supported her as his preferred successor.

Yesterday, asked whether she had “the fuel in the tank” to keep serving as a minister, Allan didn’t blink. “I most certainly do.”

Energy in politics has never been a problem for Allan, the Minister for Transport Infrastructure and the Suburban Rail Loop. But keeping a lid on the cost of the major projects she oversees has been.

Under Allan, the state opposition points to what it says is a $28.1 billion blowout in promised transport infrastructure since Labor returned to office in 2014.

While that figure relies on some fairly creative accounting by the Coalition, what is indisputable is that, under Allan, projects are costing billions of dollars more than the government said they would when they donned hardhats and high-vis to announce them.

Also beyond doubt though is that, under Allan and Andrews, an enormous amount of new and much needed transport infrastructure has been built in Victoria since 2014. 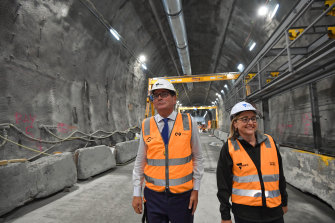 Allan with the premier inside one of the Metro Tunnel stations in 2020.Credit:Joe Armao

Before the pandemic reset the state’s priorities in 2020, building new infrastructure at a frenetic pace was key to Labor’s popularity as a state government.

That pandemic though had its challenges for Allan, who was acting premier in late 2020 and early 2021 when Victoria took the dramatic step of shutting the border with NSW on New Year’s Eve.

“This is not an easy choice,” Allan said of the closure, that upended the summer breaks of 60,000 Victorians and led to massive traffic jams as motorists frantically tried to cross the border to avoid 14 days of home quarantine.

About 4000 Victorians were unable to cross the Murray before the 11.59 cut-off that night, and found themselves trapped on the wrong side of the river.

Controversies aside, Allan said on Friday that serving her regional electorate was what drove her. “I get tremendous motivation from being the member for Bendigo East; serving the community I was born and grew up in is indeed the greatest privilege of all.”

Allan, who has two children with unionist Yorick Piper, was elected in the pro-Labor regional swing of 1999, claiming Bendigo East from former Liberal minister Michael John. She now holds the seat on a margin of more than 7 per cent.

Not long after she was first elected, the Women’s Electoral Lobby touted her as a future leader of the party. Back then, she tamped down her leadership aspirations. On Friday, she did much the same.

Asked twice if she wanted to be premier, she said: “My ambition is to see the reelection of a third Daniel Andrews Labor government. Because we’ve got tons to do.”