A Victorian Labor powerbroker and former Commonwealth minister who played a key role in selecting the party’s nominee for a newly created federal seat west of Melbourne is lobbying for a company behind a controversial plan to dump toxic soil from the West Gate Tunnel in the same electorate.

Alan Griffin, a former federal minister in both the Rudd and Gillard governments, remains a key powerbroker within Victorian Labor and was a central figure in the latest stability deal which delivered the nomination of Samuel Rae in the new seat of Hawke, which takes in a proposed site for the toxic soil dump near Bacchus Marsh. 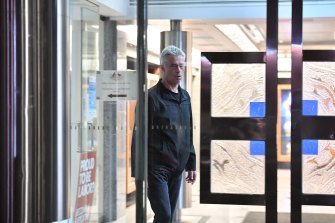 Mr Griffin confirmed to The Age that he has provided advice to the Calleja Group – the owner of Maddingley Brown Coal Mine, which is proposing to develop the Western Soil Treatment facility to receive and safely manage spoil dug up from the West Gate Tunnel project. But he said his work was to provide advice to ensure a disallowance motion by the Liberal Party to block the dump in Bacchus Marsh didn’t pass Victoria’s upper house, where Labor does not have a majority.

Several sources who were part of the recent peace talks between between the Right and Left factions said Mr Griffin was “very active” during negotiations and attended many critical meetings prior to the pact being agreed upon.

A key part of the deal was to determine which faction would control the the new seat of Hawke which includes Sunbury, Melton and Bacchus Marsh. The seat was allocated to the Right, and in return the neighbouring federal seat of Gorton has been promised to the party’s Left faction on the retirement of the current MP, Brendan O’Connor.

Several sources who attended the meetings, who spoke on condition of anonymity as they were not authorised to comment publicly, said one of the conditions Mr Griffin’s Left faction wanted in return for handing over the seat was for Mr Rae to be preselected.

“You have to ask yourself if some deal has been done to ensure he (Mr Rae) doesn’t rattle the cage over the (tunnel soil) project,” one Labor source said.

But Mr Griffin said the claim he wanted Mr Rae to keep quiet about the toxic soil dump was “ludicrous”.

"This is not an issue that came up in any way when reaching a deal with the party," he said.

Mr Griffin said he had never discussed the toxic soil issue with Mr Rae, who he supported for preselection, nor did it come up during wider peace talks between warring factions.

Mr Rae is a close ally of Right faction powerbroker Stephen Conroy and Labor’s federal deputy leader Richard Marles. The new seat is expected to be a safe Labor electorate with a projected margin of about 10 per cent.

The decision to preselect Mr Rae has split the faction, with several unions pushing for a woman to be preselected to address a growing gender imbalance among the state’s federal MPs.

Community groups are furious at the Andrews government after the Bacchus Marsh landfill site was approved to receive contaminated soil and are warning the party not to take the seat for granted.

Moorabool Shire Council and several grassroots groups are fighting against the project because of the site’s proximity to schools and aged care communities, as well as the impact of trucks on the Bacchus Marsh Avenue of Honour.

Jarrod Bingham, a former Moorabool councillor, snake catcher and one-time independent candidate, believes the community is ready to punish Labor over the issue.

Mr Bingham said he has been urged to contest Hawke at the next election after polling an impressive 9 per cent in the neighbouring seat of Gorton at the 2019 election.

He said that while he was a member of council he had questioned why tunnel contractor Transurban had not considered treatment of the soil to ensure it could be stored more safely at the Maddingley Brown Coal mine.

“I was told it was too expensive and would hold up the project. That was two years ago and look where we are now,” Mr Bingham said.

“Let’s face it, they wouldn’t have won the last state election if the field hadn’t been diluted by so many independents. I think next time there will be more of a coordinated approach.

One senior Labor source said the new seat could not be taken for granted given the mood in the community.

“There is a problem here that shouldn’t have been here, it should have been fixed,” the source said.

In November, the Moorabool Environment Group took legal action in the Supreme Court seeking a judicial review of an Environment Protection Authority’s decision to green-light the project.

The group has claimed the EPA, when approving the operator's environment management plans, failed to take into account the presence of growling grass frogs, a threatened species, and that the decision was "unreasonable, and no reasonable decision-maker could have made it".

Group president Jodie Valpied said at the time she was concerned about the impact on the residents of Bacchus Marsh, and the fresh produce that area’s market gardeners provide to the rest of Victoria.