There was widespread damage from the storms in multiple counties in Illinois and Arkansas states, including homes and other buildings destroyed, wires down and thousands of people without power. 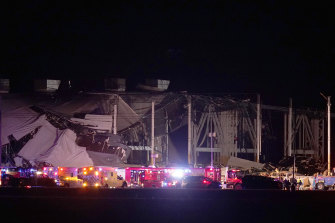 Emergency vehicles stage outside an Amazon warehouse in Edwardsville after it was heavily damaged by a storm on Friday. Credit:AP

In Arkansas, at least two people were killed when a reported tornado ripped through a nursing home. Craighead County Judge Marvin Day told The Associated Press that a tornado struck the Monette Manor nursing home in Monette at about 8.15pm, trapping 20 people inside as the building collapsed. About 90 minutes later the building had been cleared and everyone initially believed to have been inside had been accounted for, but Day said crews still must search the debris for possible additional victims.

Police and fire agencies from throughout the region responded to the area of the Amazon warehouse collapse, outside of Edwardsville. There were reports of perhaps 100 or more people trapped inside, although those numbers were not confirmed.

The Belleville News-Democrat reported that the Amazon fulfilment centre in Edwardsville opened with two warehouses in 2016, with 140,000 square metres of space. The warehouses are used to store items until they are shipped to mail-order customers.

A large tornado had been reported in the Edwardsville area just after 8pm. The National Weather Service in St Louis issued several reports of “radar-confirmed” tornadoes in the region.

There were also reports of a house destroyed in Defiance, Missouri, and homes flattened in St Charles County. 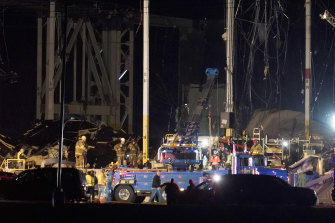 First responders work outside the Amazon fulfillment centre in Illinois.Credit:AP

A tornado watch, meaning conditions were right for twisters to form, took effect on Friday afternoon and was expected to remain in place through 11pm for a wide swath of counties. The watch covered dozens of counties throughout the region, stretching into Arkansas, Kentucky, Indiana and multiple other states, the National Weather Service in St. Louis said.

The watch was upgraded to a warning — meaning a tornado had been spotted or indicated on radar — as the storm system steadily marched into the region, starting with outlying counties in Missouri and heading across the St Louis region. The storms were quickly moving north-east, with Metro East counties in their path.

Winds of up to 112km/h had been forecast for Friday night, the weather service said.

Matt Beitscher, a meteorologist with the St Louis office., had warned that residents should stay alert for whatever the weather brought.

“A lot of folks like to turn off their alerts when they sleep,” Beitscher said, but it’s not a good idea when unsettled weather takes place in the evening and overnight hours.

It doesn’t help that many people let their guard down to severe weather outbreaks in late fall and as winter approaches. “While it’s uncommon, it’s not unheard of to have severe weather in December,” Beitscher said.

In late October, at least five tornadoes touched down in Missouri and Illinois south of St Louis, including two large twisters with peak wind speeds of about 240 km/h.

The weather has been particularly topsy-turvy this week, with snow flurries sighted in some parts of the region on Tuesday, and then a steady rise in temperatures over the past several days. The forecast for the weekend called for slightly cooler temperatures, followed by another warm-up next week.