EXCLUSIVE: Private Investigator Amber Heard hired to dig up dirt on Johnny Depp claims she took advantage of him to further her career and actor is responsible for his own downfall because he let friends leech off him

Hollywood ‘fixer’ Paul Baresi, 74, was at the ‘frontline’ of the defamation cases between the couple and was hired by Heard, 36, to dig up dirt on Depp, 58, before his UK defamation case.

Johnny Depp won his defamation case against his ex-wife Amber Heard on Wednesday and was awarded $15million.

During a three-month investigation Baresi interviewed 100 people across the US and Europe who worked with Depp on films dating back 30 years.

Yet when Baresi couldn’t find any dirt he was fired by the Heard.

However, the P.I. from Rancho Cucamonga, California — who was once hired to investigate unproven claims that Tom Cruise had a gay affair — had ignited a fascination in himself and continued investigating Depp.

From some of Depp’s closest friends he learned the A-lister was surrounded by so-called pals who leeched off him financially and emotionally.

Baresi told MailOnline: ‘When Amber hired me she wanted proof that Johnny was a serial abuser for women and I couldn’t find that.

‘I couldn’t find another women who said Johnny abused them.

Baresi said he interviewed more than a dozen people whose rent, medical bills, house payments, car payments and even bail and even legal fees were paid by Johnny.

He said: ‘Johnny was besieged by people who ingratiated themselves into his domain. 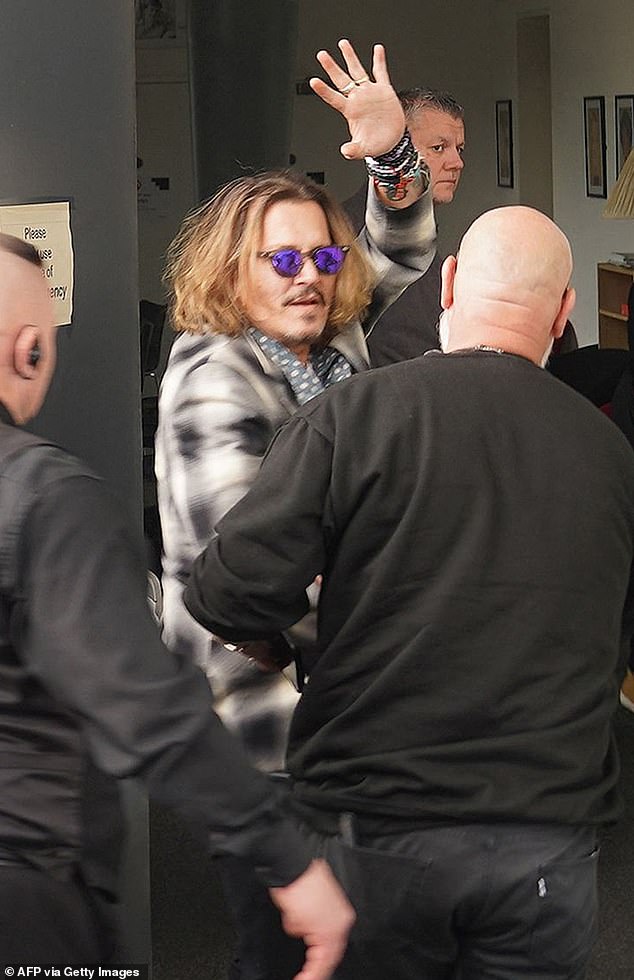 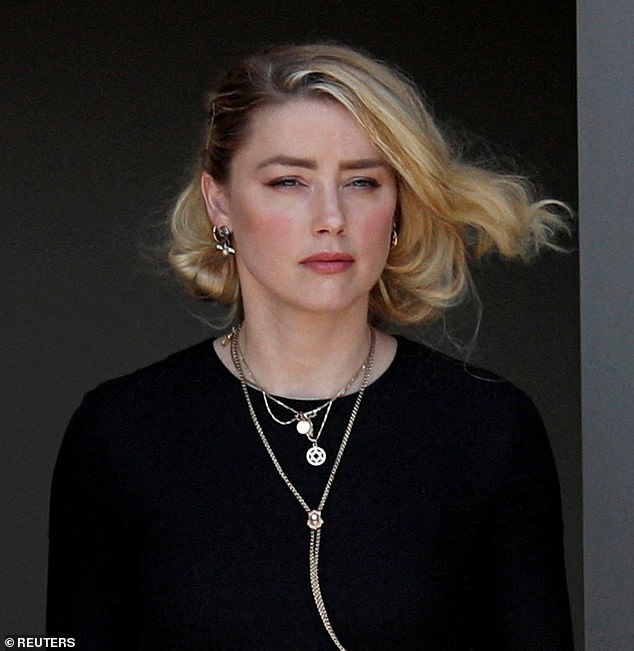 Heard, like so many others, took advantage of Depp’s goodwill and ‘sensitive’ nature, her former P.I. said 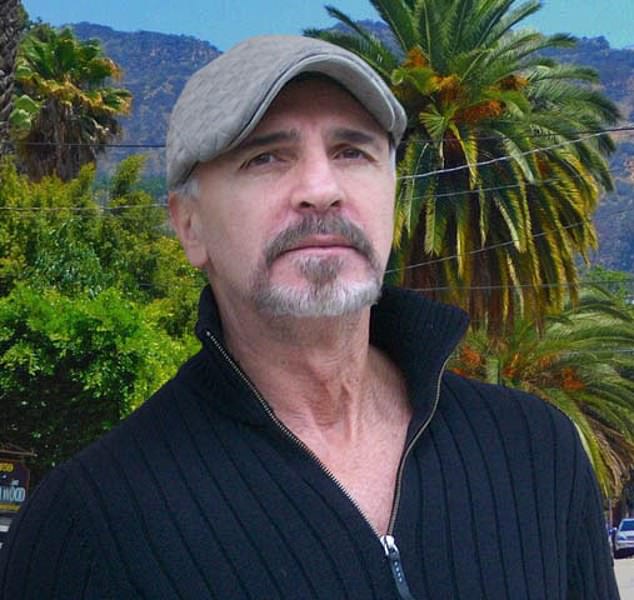 Hollywood ‘fixer’ Paul Baresi, 74, (pictured), from Rancho Cucamonga, California, was at the ‘frontline’ of the defamation cases between the couple and was hired by Heard, 36, to dig up dirt on Depp, 58, before his UK defamation case. 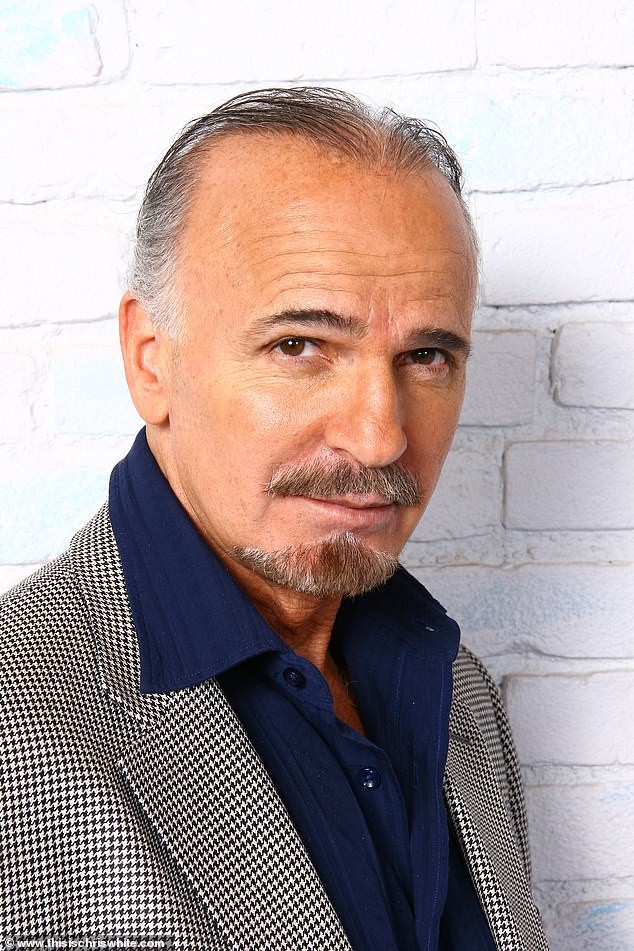 Baresi said: ‘Even Amber in some respects was an opportunist on par with everyone else. ‘She obviously knew his power in Hollywood and she seized upon that power in the hopes of furthering her career’

‘Once they were there, they’d scratch his back with one hand while the other took in the feed.’

‘All of the people around him have been on the take for so many years.

‘They feel comfortable with taking things from him. He’s a very passive guy.

He added: ‘Even Amber in some respects was an opportunist on par with everyone else.

‘She obviously knew his power in Hollywood and she seized upon that power in the hopes of furthering her career.

‘At the end of the day, in Hollywood, it’s who you know and who’s pulling for you. Because for every part in a movie there are 2,000 people equally competent to handle that role.

Baresi saw the inner workings of Johnny’s Depp’s lifestyle and was shocked to find the multimillionaire actor was ‘king in the realm of entertainment’ but also easy game for people with predatory behavior.

Before his success in Pirates of the Caribbean, Depp had a troubled upbringing.

He was a high school dropout with an abusive and suicidal mother who moved from a small town in Kentucky to Hollywood.

He suffered childhood abuse at the hands of his volatile and violent mother. 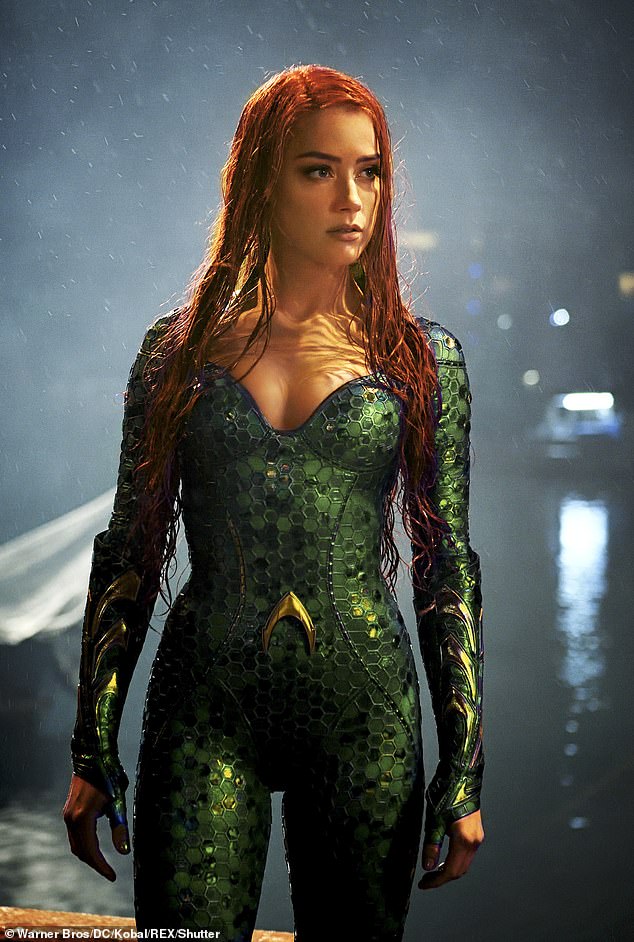 Amber Heard is best known for her role as Mera in Aquaman. Her former private investigator said she took advantage of Johnny Depp because she wanted to boost her fledgling acting career 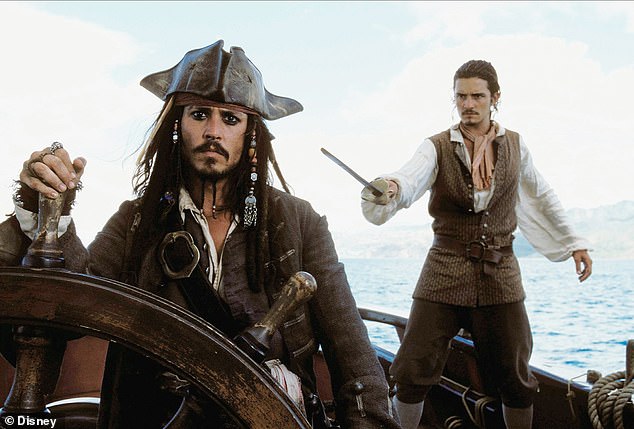 During his defamation trial against Heard he said: ”In our house we were never exposed to any type of safety or security, the only thing to do was stay out of the line of fire.

‘My mother was quite unpredictable. She had the ability to be as cruel as anyone can be with all of us,’

Depp testified that the violent home life he was brought up in taught him to never recreate the same kind of abuse in his own home later in life.

Yet his position as a megarich superstar meant he had a vast amount of money, and Depp had the rockstar attitude to match it, spending lavishly and sometimes irresponsibly.

Depp spent his money on mansions, a fleet of luxury cars, traveling only by private plane and blasting the ashes of his late friend Hunter S. Thompson’s from a cannon.

‘Johnny feels sorry for these people. Maybe he feels guilty because he made so much money and he feels like he has to take care of these people.

‘I think it proved to be the bane of his existence, unfortunately. His ruin was in part by his own doing.

‘Johnny would let them have free reign and walk all over him. Isaac Baruch, who testified on Johnny’s behalf, he’s the worst of all. He’s been living off Johnny his entire adult life.

‘Johnny was a big addict and in those moments that he was distracted they would just take things from him. 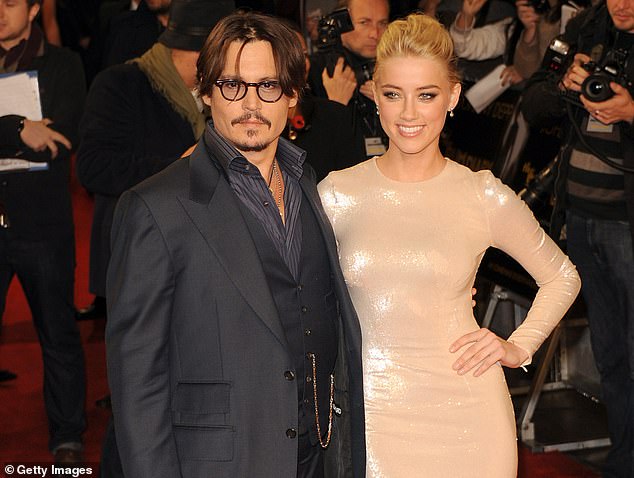 Over six weeks at the court in Fairfax, Virginia, Depp called 38 witnesses while Heard called 24. Depp and Heard met on the set of the 2011 movie The Rum Diary, turning up on the red carpet together for its London premiere in 2011 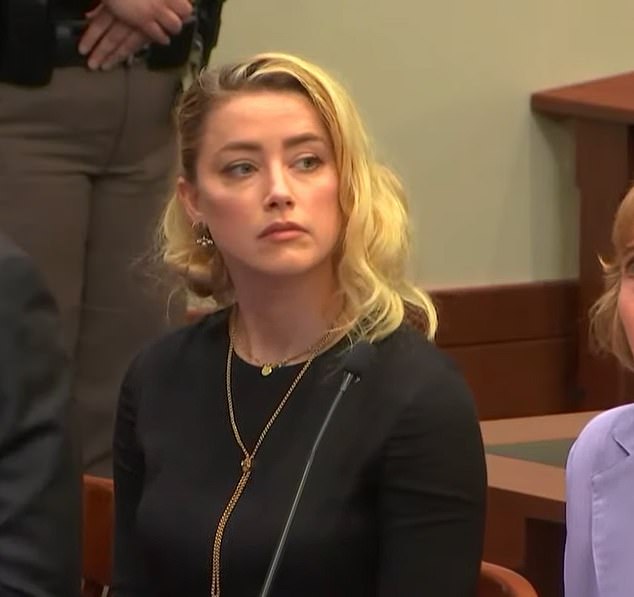 Heard, 35, countersued for $100million claiming that Depp’s lawyer Adam Waldman made defamatory statements by calling her claims a ‘hoax’

‘That’s what he’s lived with for decades.’

He added: ‘He grew up to be a sensitive, fragile man. He didn’t have the role models to champion him.’

Baresi said he realised much of Depp’s fall from grace ‘was his own doing’ because he allowed himself to be surrounded by people who would take advantage of him.

The P.I. said: ‘The decline and downfall were due to these grifters, these wannabes, these freeloaders that came into Johnny’s life.

‘They would insinuate into Johnny’s life. They would milk him for whatever he was worth – not so much materialistically or monetarily but emotionally.’

It wasn’t only Baresi who thought Depp had a problem with his demanding entourage.

Chuck E Weiss, one of Depp’s closest friends, thought the people Depp surrounded himself with were bad for the world-famous actor.

Before Weiss died in 2021, Baresi said the songwriter told him: ‘For decades, Johnny’s so-called friends stole from him.

‘The worst part is they relied on his alcohol and drug addiction to keep his head in the clouds so he didn’t catch them doing it.

‘Over the years Johnny became accustomed to his friends helping themselves to his stuff— cash, jewelry, even pieces of his clothing.’

Weiss said Depp had told him the manager of a nightclub he owned took cash from the till, while a supposed friend had stolen several hundred-dollar bills from his bedstand.

Even at the time of Heard and Depp’s split in May 2016, celebrity tattooist Jonathan Shaw, who did most of Depp’s body artwork, wrote: ‘As a close personal friend of Johnny Depp’s for over 30 years, I’ve only seen him be one of the kindest, gentlest, most sensitive and generous human beings I’ve ever had the great pleasure to know.

‘The man is constitutionally incapable of raising a violent hand to a woman.

‘Everything I know about Amber Heard, however (and it’s a lot), seems to support the many claims that she is a lying, two-faced, bottom-feeding fame harpy, who lives by the old Hollywood code of ”hurray for me and f**k you!”

‘It’s disgustingly obvious to anyone with half a brain that the absurd contrived allegations about Johnny’s behavior are nothing but a pathetic and desperate attempt to extort money from my dear little brother.’

After less than three days of deliberation, the jury ruled in favor of all three of Depp’s defamation claims against Heard on Wednesday, finding that she had falsely accused him of domestic abuse. 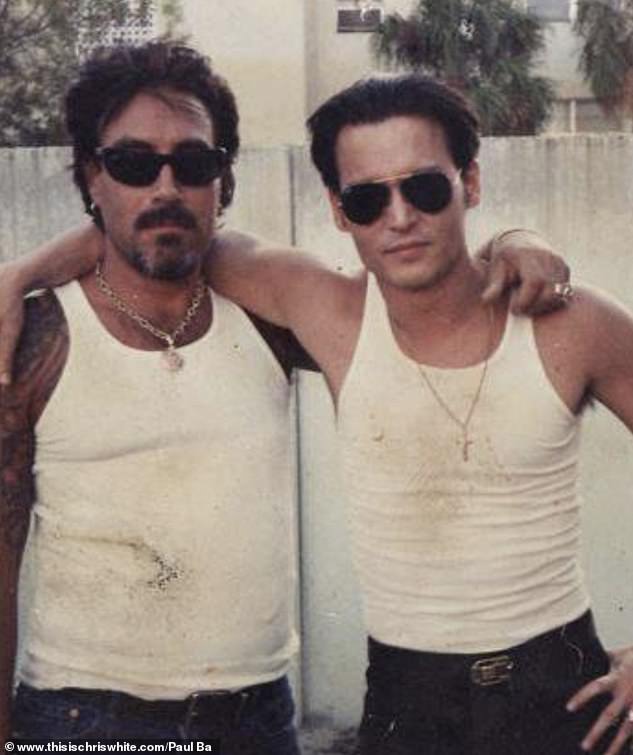 At the time of Heard and Depp’s split in May 2016, Jonathan Shaw wrote on Facebook: ‘As a close personal friend of Johnny Depp’s for over 30 years, I’ve only seen him to be one of the kindest, gentlest, most sensitive and generous human beings I’ve ever had the great pleasure to know’ 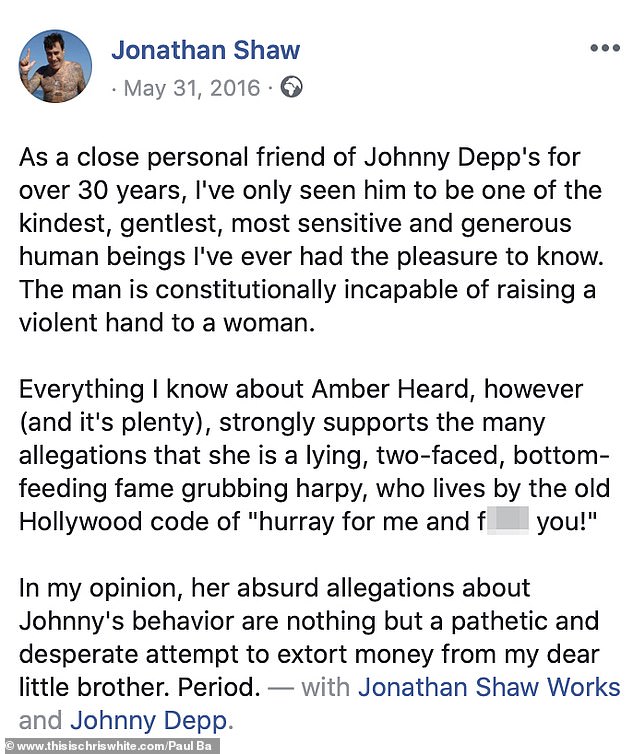 Shaw added: ‘The man is constitutionally incapable of raising a violent hand to a woman’ 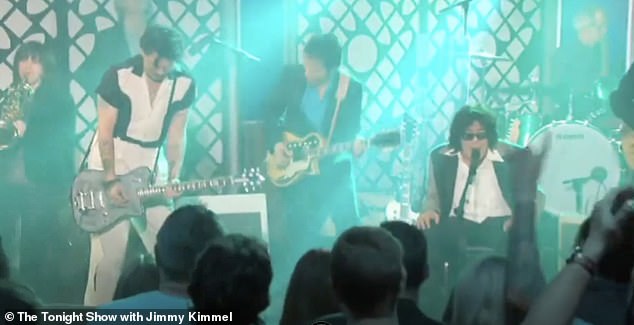 Chuck E Weiss, one of Depp’s closest friends, thought the people Depp surrounded himself with were bad for the world-famous actor (pictured seated, performing with Depp, left, in 2019) 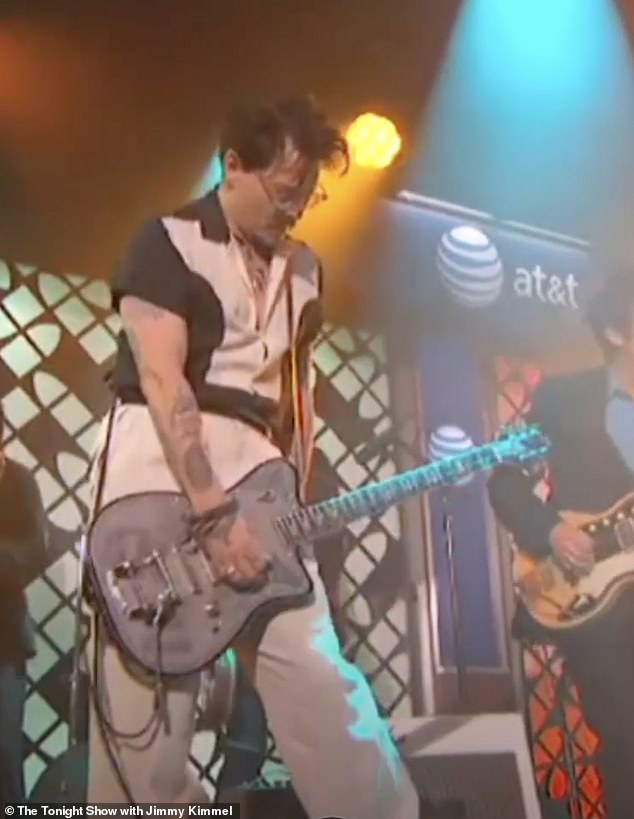 Before Weiss died in 2021, Baresi said the songwriter told him: ‘For decades, Johnny’s so-called friends stole from him’

The actor was awarded $15million — $10million in compensation and $5million in punitive damages.

Heard won just one of her three countersuit claims, which related to statements made by Depp’s lawyer suggesting she and friends had trashed their apartment before calling the police out.

She was awarded $2million in compensatory damages out of the $100million she was seeking in her countersuit against her ex-husband and received zero dollars in punitive damages.

It means Depp walks away from the case with $8.35million.

In a statement after the verdict Depp said: ‘Six years ago, my life, the life of my children, the lives of those closest to me, and also, the lives of the people who for many, many years have supported and believed in me were forever changed.

‘And six years later, the jury gave me my life back. I am truly humbled.’ 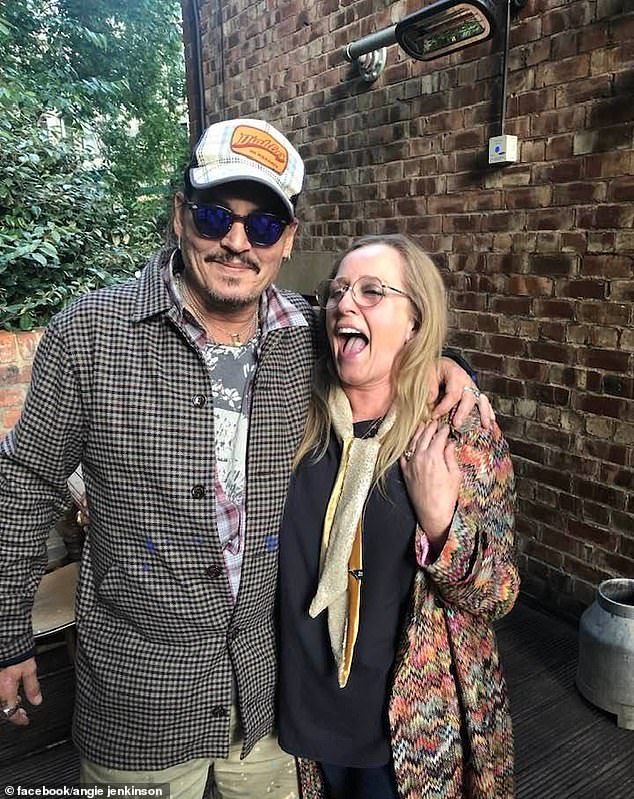 Depp is seen with a fan in Newcastle, England as the trial came to a close on Wednesday 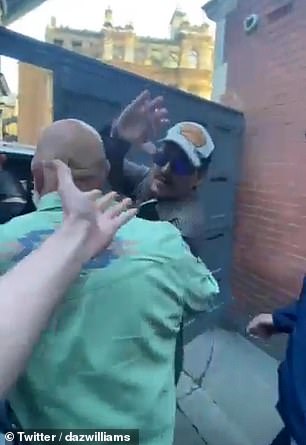 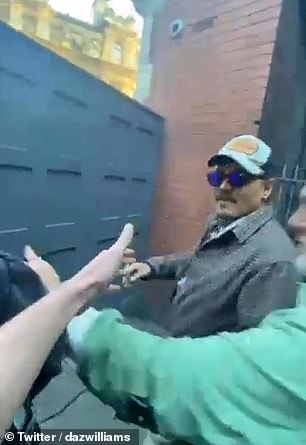 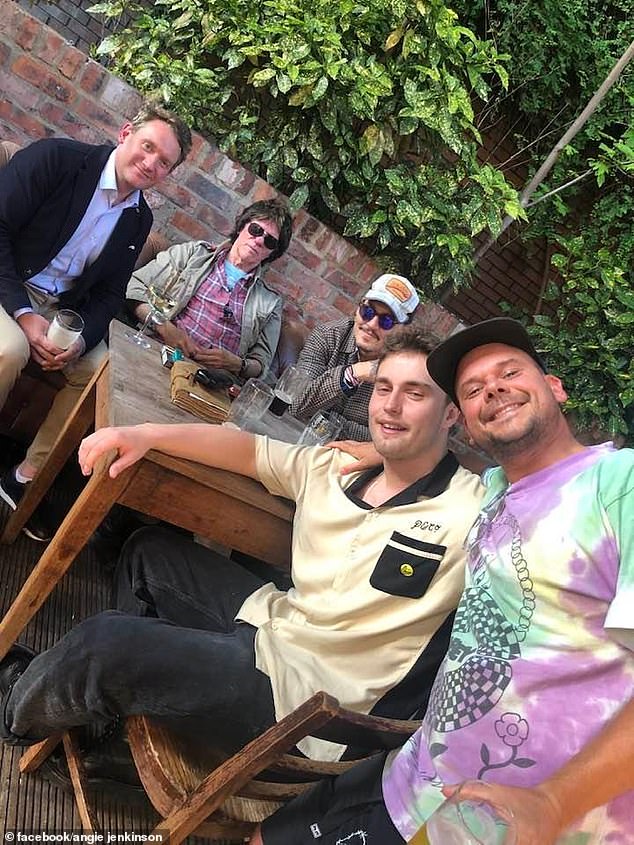 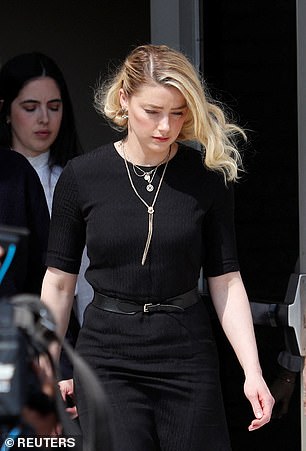 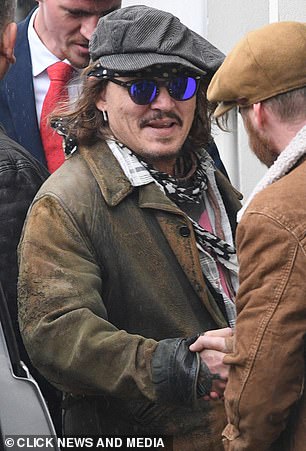 Meanwhile, Heard said: ‘The disappointment I feel today is beyond words. I’m heartbroken that the mountain of evidence still was not enough to stand up to the disproportionate power, influence, and sway of my ex-husband.

‘I’m even more disappointed with what this verdict means for other women. It is a setback. It sets back the clock to a time when a woman who spoke up and spoke out could be publicly shamed and humiliated. It sets back the idea that violence against women is to be taken seriously.

‘I believe Johnny’s attorneys succeeded in getting the jury to overlook the key issue of Freedom of Speech and ignore evidence that was so conclusive that we won in the UK.

‘I’m sad I lost this case. But I am sadder still that I seem to have lost a right I thought I had as an American – to speak freely and openly.’

MailOnline has contacted Johnny Depp and Isaac Baruch for comment.

Amber Heard refused to comment when approached by MailOnline.