More than 10,000 trees have been cut down to make way for the Andrews government's major transport projects, with more than twice that number now facing the axe. 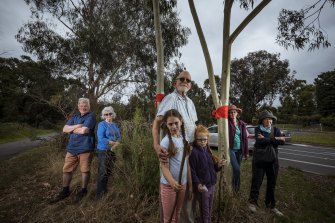 Including the 26,000 to go for the North East Link road project, the government will have overseen removal of more than 40,000 trees. It argues that for each project it offsets the losses by planting more trees than are lost.

But at sites across Melbourne, people who have fought – and largely lost – battles to save trees say their frustration is at the lack of true consultation on what trees will go.

James Conlan led a push in 2019 to stop about 100 trees going next to Moreland railway station.

"We questioned the necessity of removing 97 per cent of the trees," he said. "They left three or four in the end."

Some that were meant to be protected, he said, were chopped without permission by the builder of the elevated rail line that removed four level crossings. 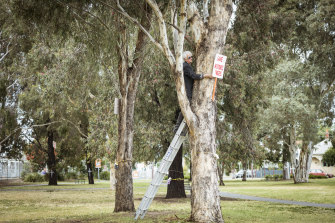 Trees in Gandolfo Park, near Moreland railway station, that are now gone.Credit:Chris Hopkins

"Most of us were supportive of the project, but the way it was conducted, we were absolutely appalled," said Cr Conlan, a Greens member who ran for local council after losing the trees battle. He is now a Moreland councillor.

"Each battle over a few trees, it’s insignificant to the state agenda, but when you magnify it over the whole city, they are generating a lot more opposition than they realise."

A similar fight is under way in Eltham, where the government plans to remove hundreds of trees to upgrade a major roundabout at the corner of Fitzsimons Lane and Main Road. 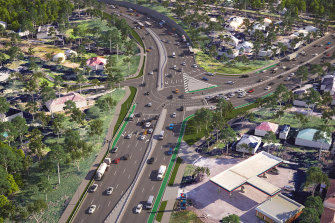 An artist’s impression of the redesigned intersection at Fitzsimons Lane and Main Road in Eltham.Credit:Victorian government

John Graves is a member of the Eltham Community Action Group and was a transport engineer at VicRoads for 35 years.

He said the project was vastly overengineered for what was needed at a busy but seldom overwhelmed intersection.

"For what are fairly low-volume arterial roads, this thing they're building is worthy of Maroondah Highway or something that meets a major freeway," he said.

Downsizing the road to be delivered would save about 100 trees, he said; his group estimates 242 will be cut down for the project.

Late last year a Supreme Court judge extended an injunction on the felling of trees deemed sacred by Djab Wurrung traditional owners after a yellow box referred to as the Djab Wurrung directions tree was cut down to make way for the $157 million Western Highway duplication near Ararat.

The government argues it has already revised the project and saved about 150 trees, and removed additional lanes, to satisfy community demands.

A government spokeswoman said Victorians understood you could not remove level crossings, build new roads and duplicate train lines without removing some trees.

"We will always minimise tree removal but prioritise saving people’s homes, and have planted more than double the number of trees that have been removed."

David Berry is president of the Blackburn and District Tree Preservation Society, a small group that in 2016 tried to stop 500 mature trees and thousands of shrubs being removed along the Blackburn and Heatherdale railway corridor for level crossing removals. They didn’t get far. 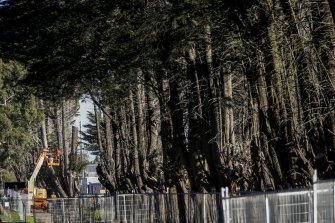 Trees along the railway line near Blackburn railway station that were removed in 2016.Credit:Eddie Jim

"There could have been a lot more trees saved," said Mr Berry. "And our experience was that there were far more trees removed than we were notified about."

He said there was little interest in engaging with the group about changing the project to save trees. "You’re largely dealing with engineering people that call the tune, not the ecologists."

His group is now fighting the North East Link, for which 26,000 trees will be chopped down to build a new tollway and widen the Eastern Freeway to up to 20 lanes in places.

At the environmental hearing on the project, four councils argued that if smaller trees were considered, 43,000 would in fact be lost. The government argues it will plant 30,000 trees, and says of the 26,000 that may go, it could be possible to save 10,000. It says most of the trees to go are in road reserves, and that better species will be planted back.

Sustainability and urban planning academic Sarah Bekessy, from RMIT, presented at the environmental hearings for the North East Link and has previously researched the topic of offset plantings to make up for large-scale tree removal.

She and other academics wrote a paper called The Anatomy of a Failed Road Project that tracked tree replacement promises.

"All of the things they said they would do, they either failed to do, or the trees didn’t grow, or they weren’t maintained," Professor Bekessy said.

She said the impact was not only on ecology but also on the community’s ability to connect with nature. "And yet in so many projects they’re systematically removing vegetation."

Opposition transport infrastructure spokesman David Davis has regularly highlighted tree loss on big projects and is fighting the government over access to documents showing what kinds of trees were removed during the Kooyong Road, Toorak, level crossing removal, where 358 trees went.

He said too often the builder simply wanted to clear the site, and that was the option the government took.

"Often the option the government chooses is the quick and dirty option rather than the one that costs a little bit more, that preserves neighbourhood character.

"These projects, they are character-influencing – they change the face of neighbourhoods, and so many are in dense corridors where the vegetation has built up over time."

Environment Victoria campaigns manager Nicholas Aberle said 2020's lockdowns highlighted the importance of green space close to homes, and any tree removed for an infrastructure project needed to be replaced.