Anthony Fauci is calling on Fox News to fire Jesse Watters after the host told a crowd to ambush Fauci in public and send the footage to his network.

“The guy should be fired on the spot,” Fauci, the director of the National Institute of Allergy and Infectious Diseases, said during an interview on CNN Tuesday. 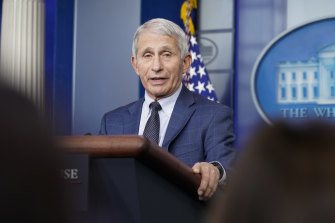 During a Monday appearance at AmericaFest, a rightwing conference in Phoenix, Watters used incendiary language in a call for people to confront and harass Fauci over his role combatting the COVID-19 pandemic under President Joe Biden and former president Donald Trump.

Watters directed members of the audience to “go in for the kill shot,” ambushing Fauci with misleading Republican claims that Fauci lied to Congress about research at the Wuhan Institute of Virology in China, “Because he doesn’t see it coming.”

Watters added that people in the audience should send footage of their confrontation with Fauci to Fox News. “Just make sure it’s legal,” Watters said. 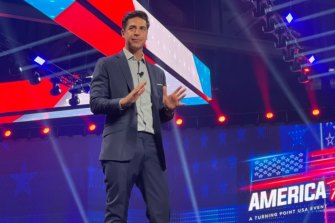 Fauci has said he and his family have received death threats from conservatives who oppose the COVID-19 vaccines and the use of masks to prevent the spread of the virus.

In July, a 56-year-old Maryland man was arrested for allegedly sending messages saying Fauci and his family would be “dragged into the street, beaten to death, and set on fire”.

“This is just a reflection of the craziness that goes on in society. The only thing that I have ever done throughout these two years is to encourage people to practice good public health practices, to get vaccinated, to be careful in public settings, to wear a mask.

“And for that, you have some guy out there saying that people should be giving me a kill shot, to ambush me?” Fauci continued. “That’s awful that he said that, and he’s going to go, very likely, unaccountable. Whatever network he’s on is not going to do anything for him.“,

Fox News hosts and personalities have repeatedly targeted Fauci throughout the pandemic.

The company has yet to publicly comment on remarks made last month by Fox Nation host Lara Logan, who compared Fauci to notorious Nazi doctor Josef Mengele during an appearance on Fox News Primetime.