More than 100 protesters chanted ‘love football, hate racism’ and took the knee in front of Downing Street today in solidarity with England football players who were racially abused after the Euro 2020 final.

Chants of ‘Black Lives Matter’ also rang out in London as the gathered demonstrators raised their fists and held anti-racism placards aloft, and heard from speakers including former shadow home secretary Diane Abbott.

Nearly a week after England’s defeat to Italy at Wembley, the Labour politician told the group: ‘The Government wants to have its cake and eat it… (Home Secretary) Priti Patel called taking the knee gesture politics.

‘I’ll tell you what gesture politics is, it’s condemning the England players throughout the tournament and then putting on an England shirt in the semi-finals.’

Referring to England footballers’ responses on Twitter, and echoing Bjorge Lillelien’s famous commentary line in 1981, she said: ‘Boris Johnson, your boys took a hell of a beating.’

It comes after the Prime Minister went to the Euro 2020 semi-final wearing his Three Lions shirt with ‘Boris 10’ on the back, while Ms Patel was pictured in an England shirt with appeared to have creases on the sleeve – causing eagle-eyed social media users to claim she had taken the jersey straight out of the packaging. 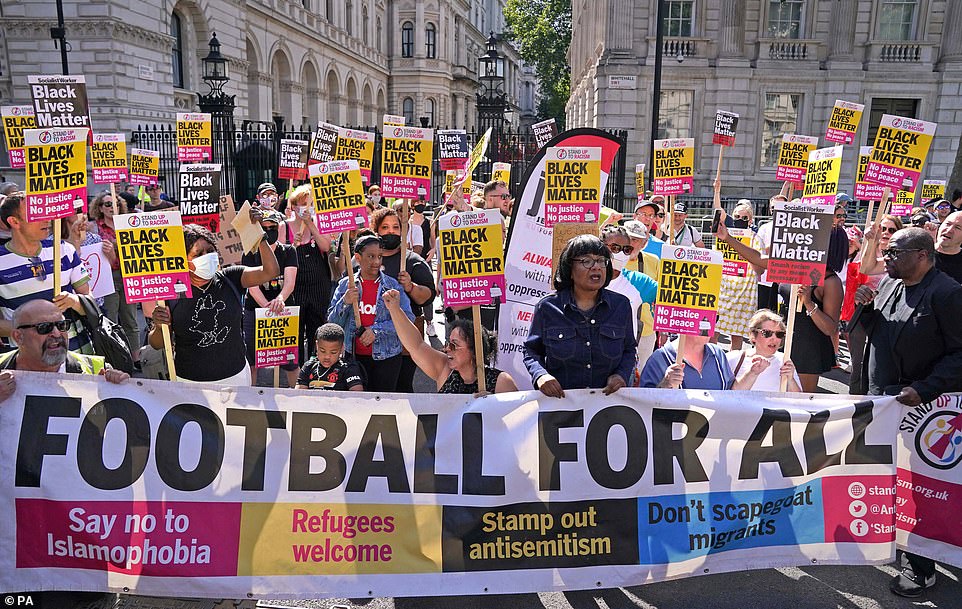 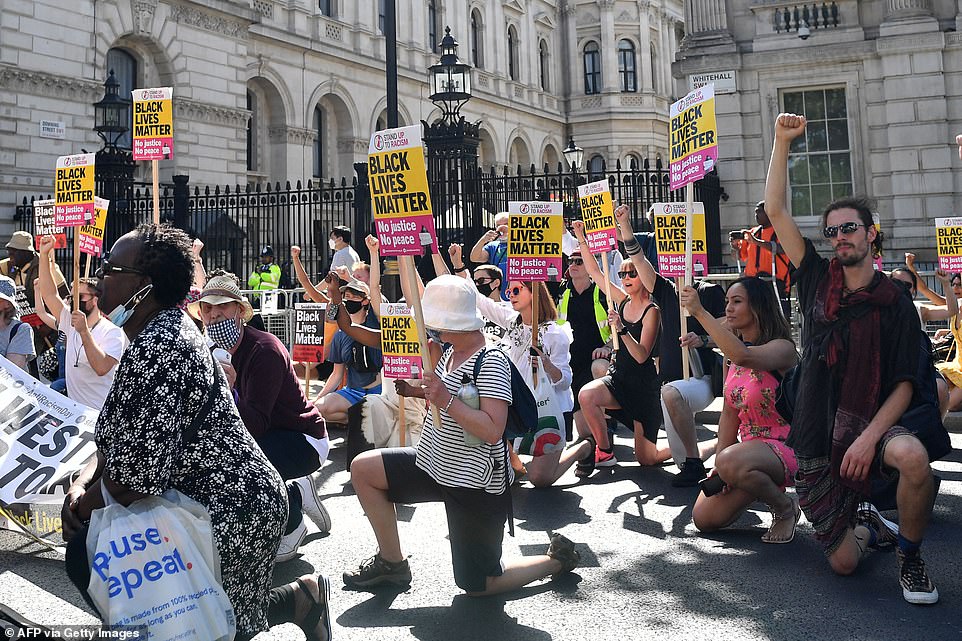 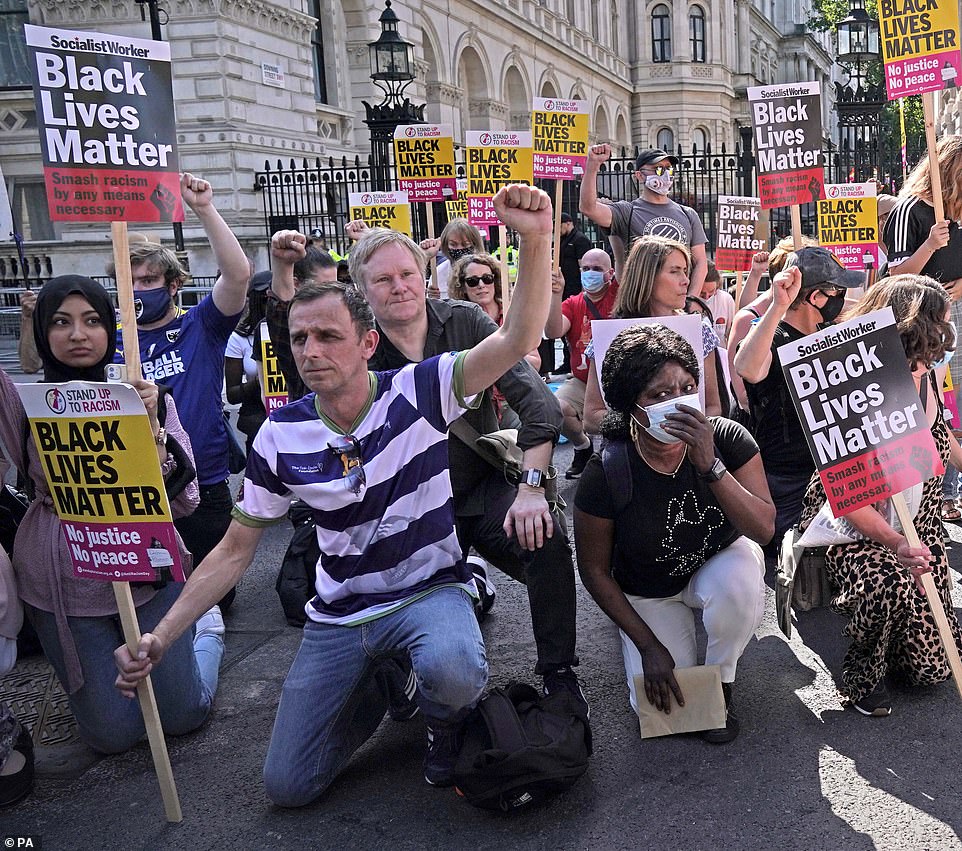 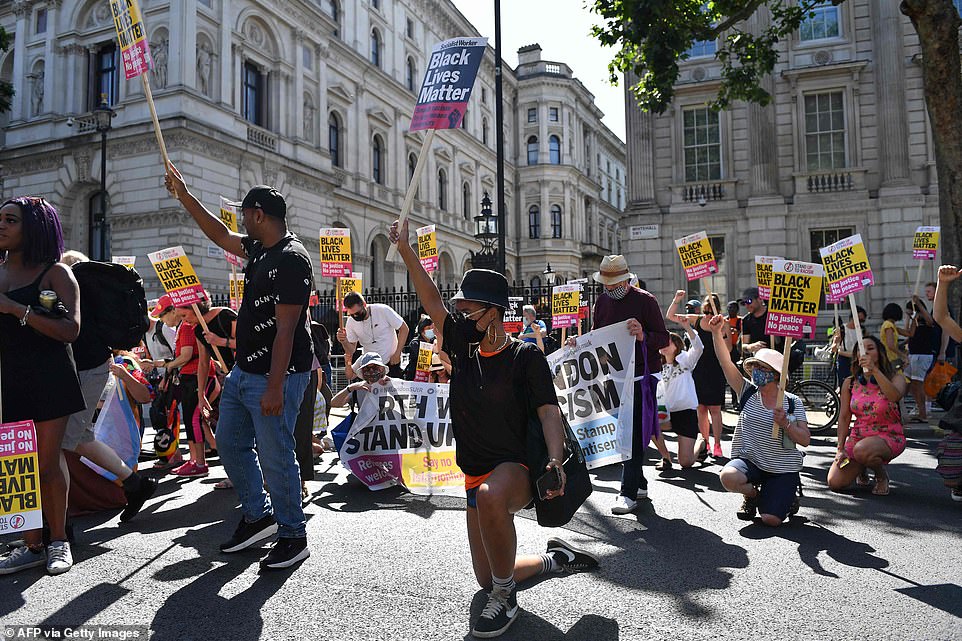 This afternoon, the gathered protesters took the knee in front of Downing Street after crossing Whitehall.

Marcus Rashford and his teammates Bukayo Saka and Jadon Sancho, who all missed penalties on Sunday, were targeted with racist abuse on social media after Sunday’s game.

Earlier this week, 19-year-old Saka told social media giants they ‘are not doing enough’ to stop racists on their platforms.

He encouraged users to continue reporting comments to the police, but vowed not to let the negativity ‘break’ him, adding that ‘love always wins’.

The Arsenal star said: ‘To the social media platforms Instagram, Twitter and Facebook, I don’t want any child or adult to have to receive the hateful and hurtful messages that me, Marcus and Jadon have received this week. It is a sad reality that your powerful platforms are not doing enough to stop these messages.’ 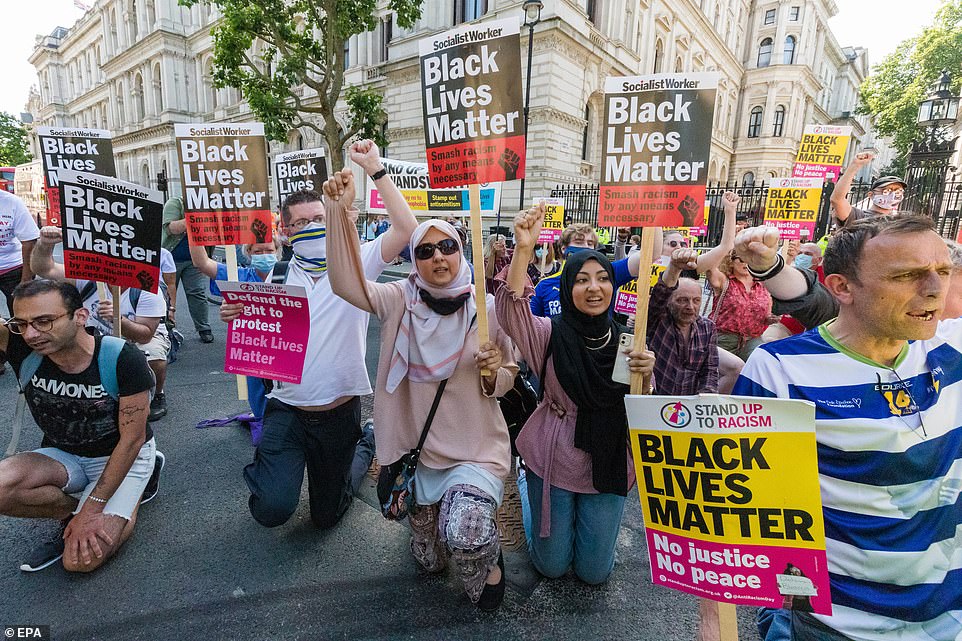 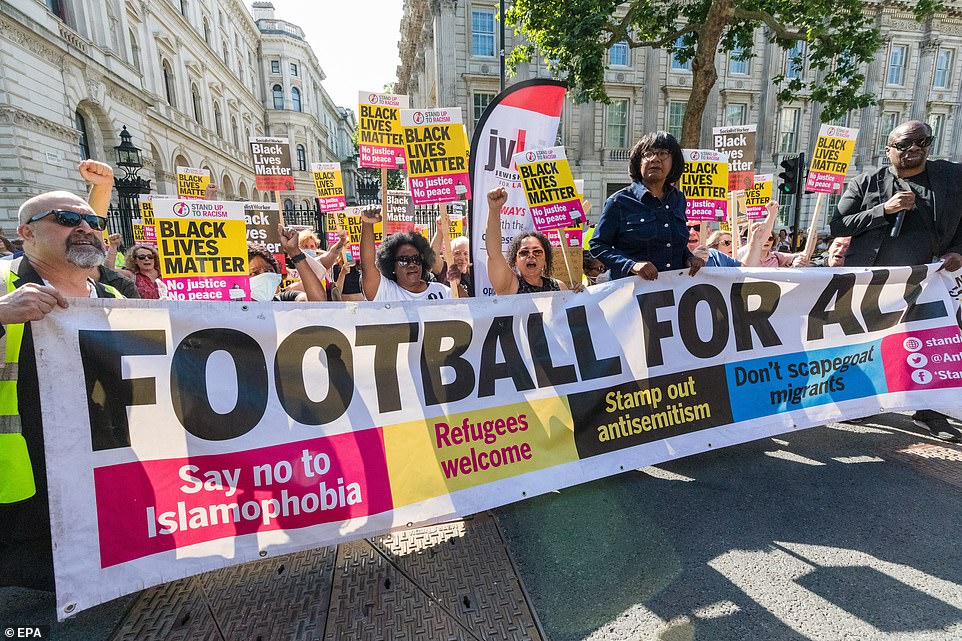 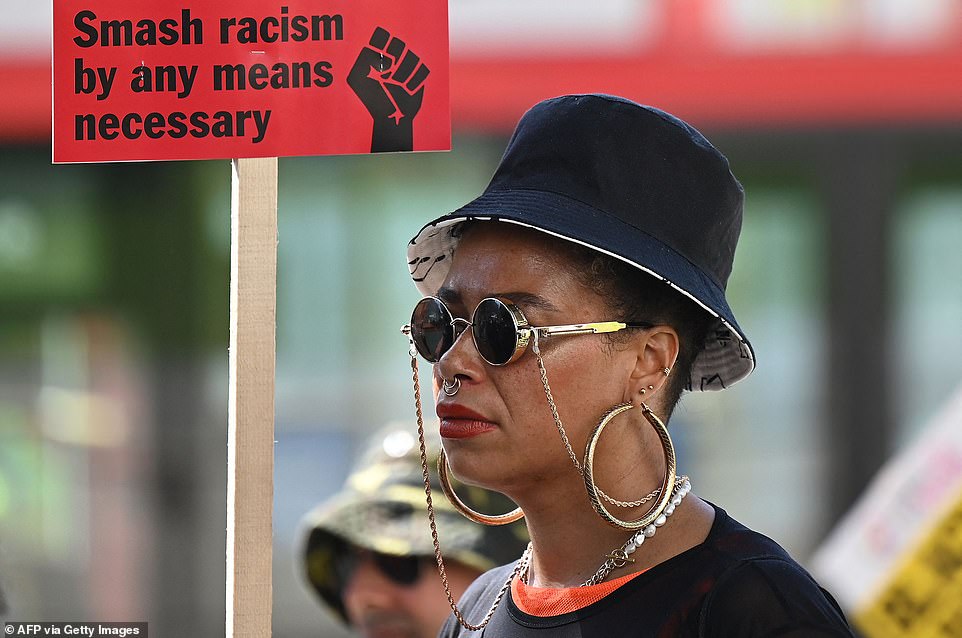 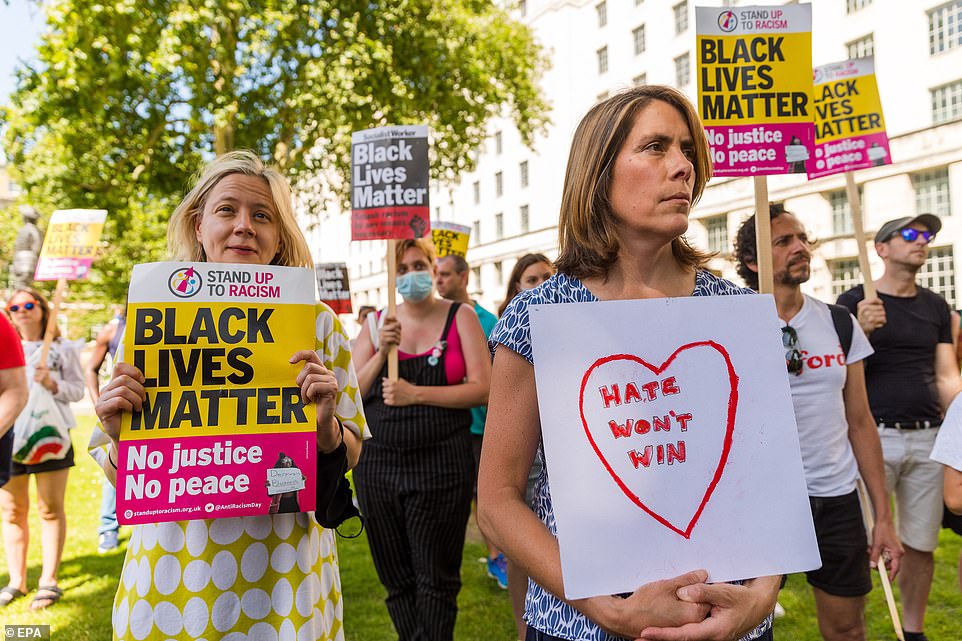 Police have arrested five men after the players were targeted with hundreds of offensive posts.

It comes as a former Metropolitan Police chief defended officers today following ugly scenes at the Euro 2020 final, but said the incident was ‘a stain on our country’s reputation’.

Hundreds of ticketless fans stormed the stadium last Sunday in an attempt to watch the historic match between England and Italy, pushing past stewards and security.

Former Met deputy assistant commissioner Andy Trotter said the behaviour was ‘disgusting’ but it was ‘simplistic’ to solely blame the police.

‘It was disgusting behaviour by fans and it does bring shame on our country,’ he told Times Radio. ‘When one reads through the accounts… there’s a whole catalogue of issues that need to be addressed. 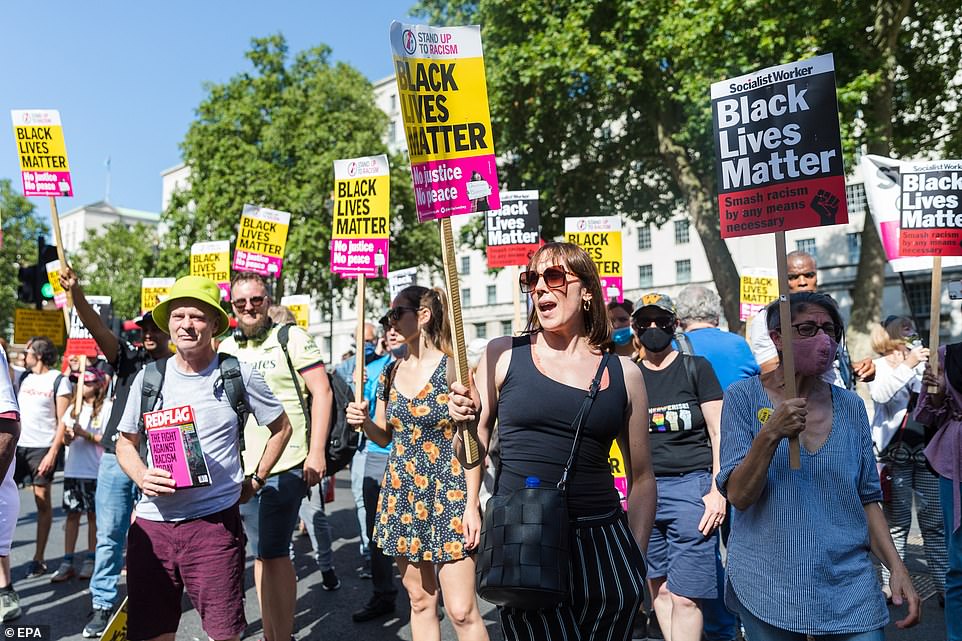 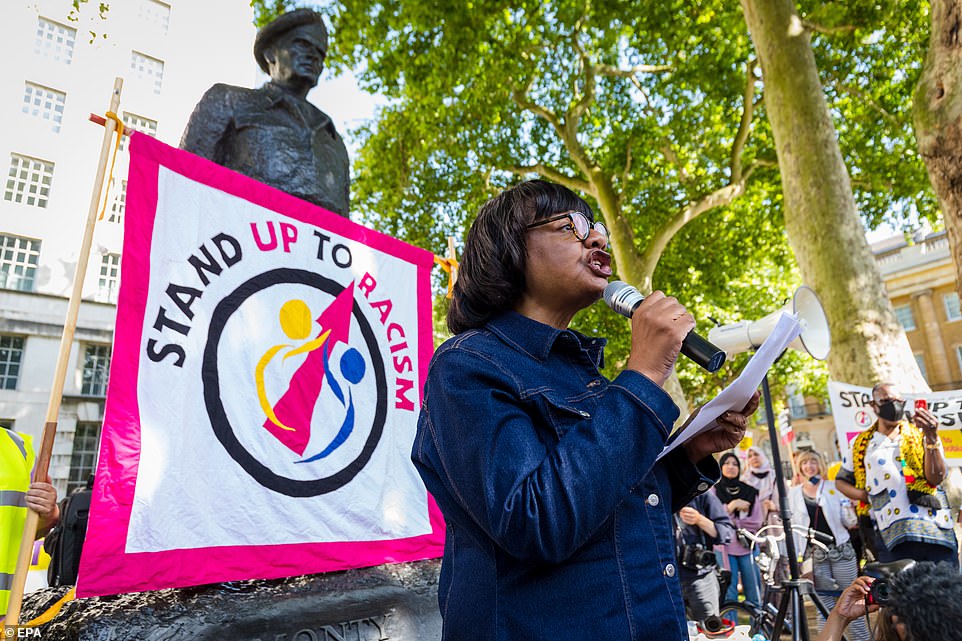 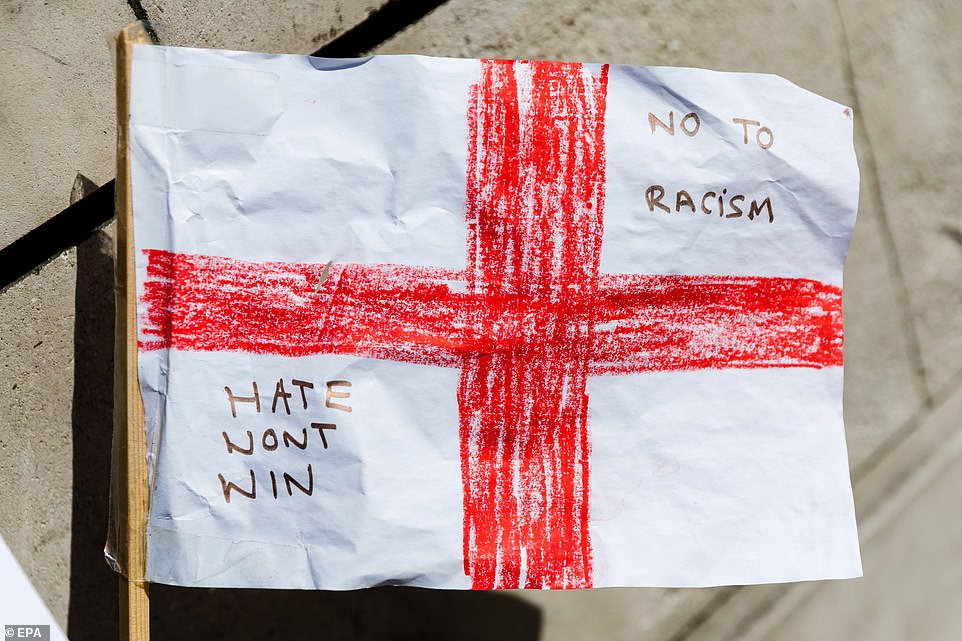 A St. George’s flag seen on the floor at the Stand Up To Racism demonstration in London this afternoon 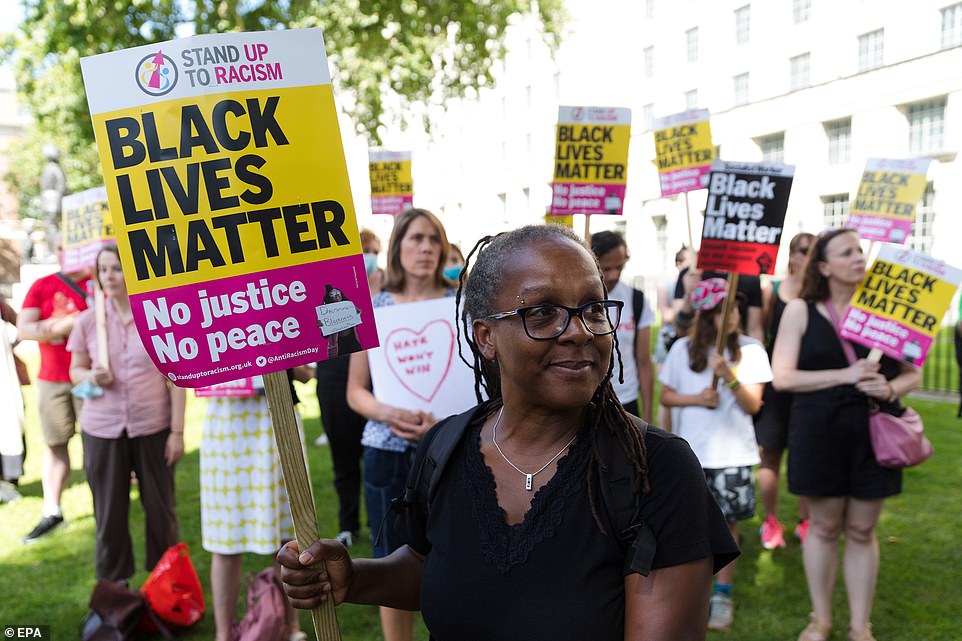 ‘I think just to pin it on the police is a bit simplistic because quite clearly there were failings everywhere.

‘(But) I’m not trying to defend anyone here because it was an awful, awful event and a real stain on our country’s reputation.’

Mr Trotter said features of the game, such as the 8pm kick-off time on a Sunday, had allowed fans to drink all day and become ‘insensible’.

‘Most football matches go ahead with a degree of drunkenness… but alcohol is a major, major problem,’ he said. 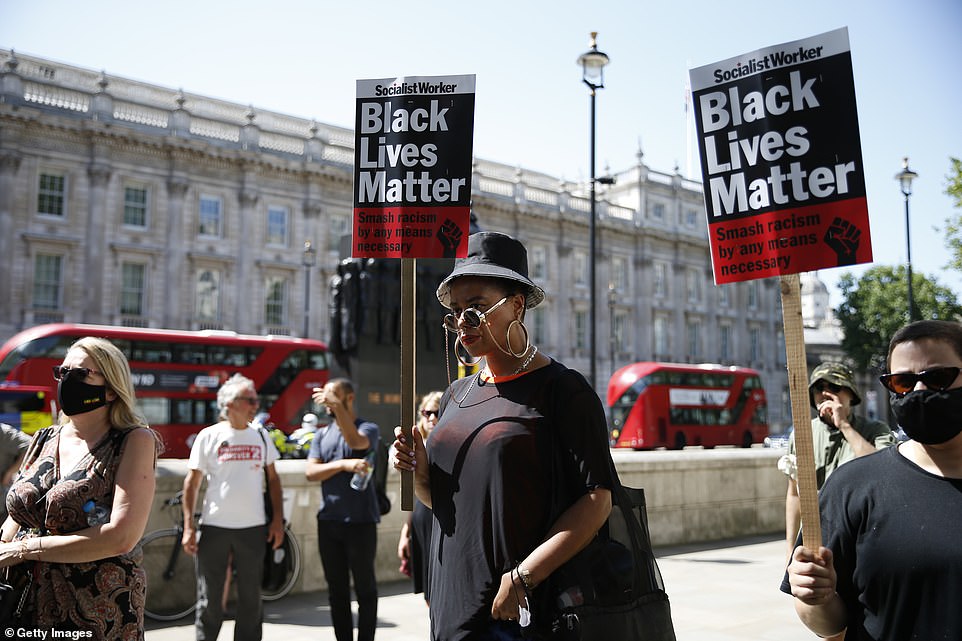 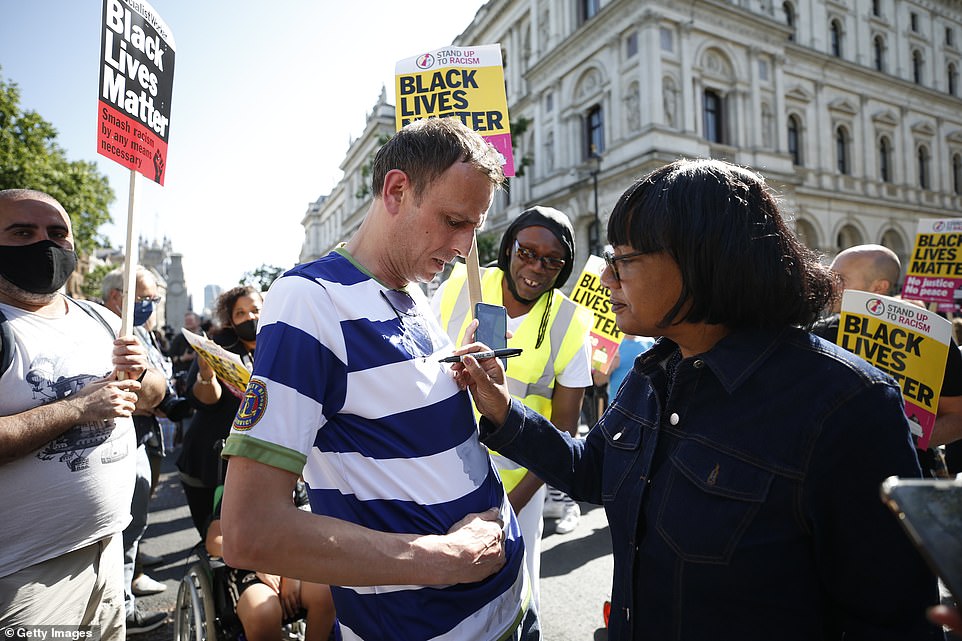 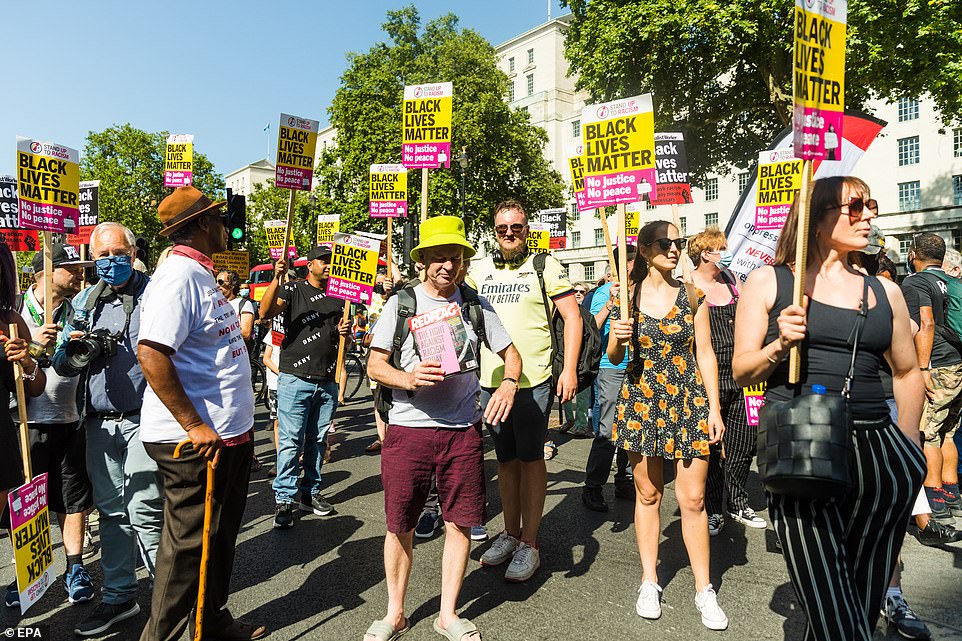 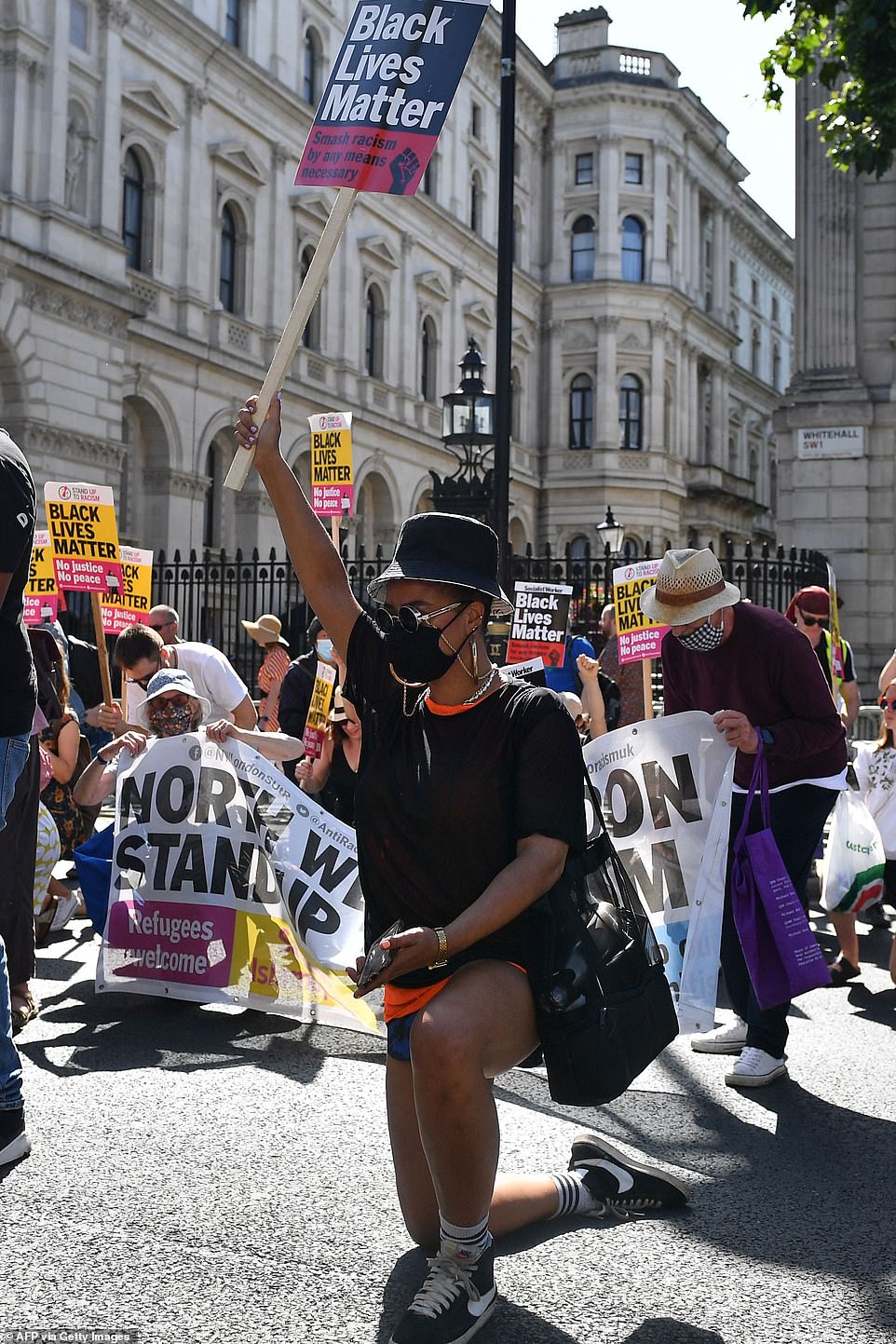 ‘Those people performing last Sunday are the same ones that perform in every town centre across this country on a hot Saturday night.

‘Tonight, all over the country those same people will be out getting drunk, getting drugged up and causing huge amounts of problems.’

By July 13, 897 football-related incidents and 264 arrests had been recorded across the country in the 24-hour period surrounding the final, according to the United Kingdom Football Policing Unit.

It took the number of football-related incidents during the tournament to 2,344, and arrests to 630.