At least two people have died after a train carrying more than 100 passengers smashed into a car that plunged off a bridge in Spain.

The Alvia train, able to reach speeds of up to 155mph, was derailed in the accident which took place in La Hiniesta, Zamora, this afternoon.

It is believed the car plunged from an overpass onto the tracks and collided with the oncoming train, which was travelling to Madrid.

Both the 89-year-old car driver and one of the train drivers were killed in the collision, local media reported. 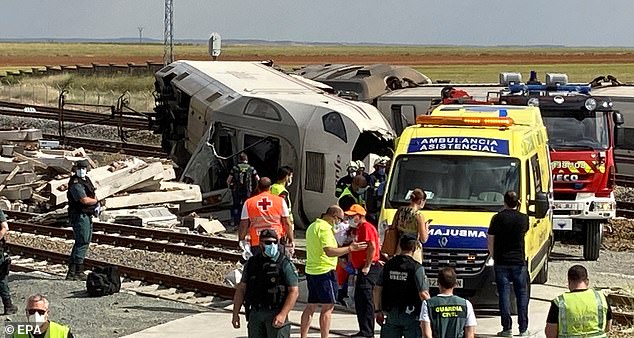 Members of the Spanish Guardia Civil and health care personnel arrive at the site where an Alvia train derailed on its way to Madrid, in Zamora, Spain

Emergency services remain at the scene rescuing survivors, though none of the train’s 180 passengers are believed to have serious injuries.  Six passengers were taken to hospital with whiplash and shock.

Video footage circulating online shows startled passengers emerging from the train wreckage as they walk along the track to safety.

One survivor said that the train experienced turbulence similar to an aeroplane as it collided with the car. 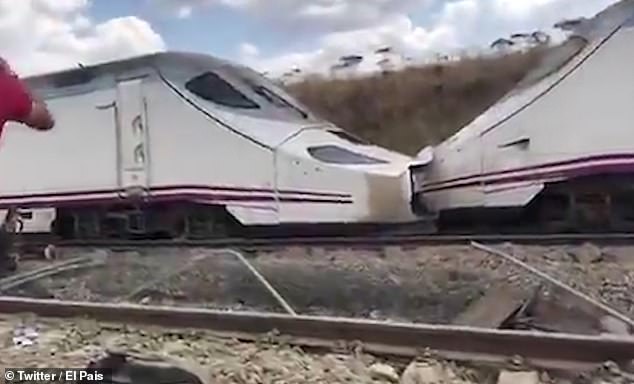 Zamora’s emergency services including ambulances, medical helicopters, the Civic Guard and firefighters were scrambled to the scene in a desperate bid to rescue survivors.

The 112 emergency service confirmed it received several calls from passengers that ‘the locomotive has run off the tracks, and the two occupants are injured and trapped.’

Renfe, which is Spain’s national railway company and runs the Alvia train service, confirmed the accident on Twitter.