Singapore: Australia is to reinforce the critical nature of its relationship with Indonesia — amid growing ties between the south-east Asian nation and China — during a planned visit to Jakarta by Trade Minister Dan Tehan next month.

Tehan’s trip has been arranged as Prime Minister Scott Morrison, US President Joe Biden and British Prime Minister Boris Johnson vowed to work more closely together on combating China’s economic coercion and aggression in the Indo-Pacific during a meeting on the sidelines of the G7-plus summit in Cornwall.

Trade Minister Dan Tehan visited the UK in April ahead of this week’s signing of an Australia-UK trade deal. Credit:Alex Ellinghausen

The planned visit is particularly noteworthy in that it would be the first in-person meeting between a minister or leader of the two neighbouring countries since Indonesian President Joko Widodo addressed the Australian Parliament in February last year.

Tehan’s flight to Indonesia has not yet been confirmed and a spokesman for the Trade Minister declined to comment when contacted. However, discussions have taken place about it coinciding with the anniversary of the Indonesia-Australia Comprehensive Economic Partnership Agreement, said sources with knowledge of the planning who spoke on the condition of anonymity as they were not authorised to talk publicly.

That deal, enacted on July 5, 2020, wrapped in Australia and Indonesia’s co-operation on defence, security and intelligence-sharing as well as trade.

Defence Minister Peter Dutton described the relationship between Australia and Indonesia as “first rate and necessarily so”.

“I’ve had the benefit of dealing closely with the Indonesians over a period of time, particularly in Home Affairs,” Dutton said at an Australian Strategic Policy Institute conference in Canberra last week.

“They have their own view in relation to what’s happening in the Indo-Pacific and they’re a very important partner for us.

“There will be a continued engagement and a maintenance of that relationship.”

Sources said there were also plans for a 2+2 meeting next month between Treasurer Josh Frydenberg and Tehan and Indonesia’s Finance Minister Sri Mulyani Indrawati and Trade Minister Muhammad Lutfi but it would be held virtually. An Indonesian trade spokesman said he had no information on a visit.

Former Indonesian trade minister Tom Lembong warned last week his country would continue its drift towards China under President Joko unless an imaginative, co-ordinated effort was made over several years by the countries in the Quadrilateral Security Dialogue — the US, Australia, Japan and India — to prevent Indonesia “going all-in on China”. 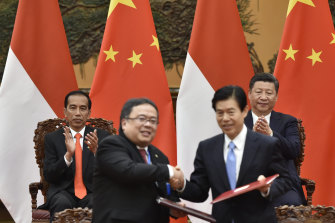 Indonesia’s President Joko Widodo, left, and Chinese President Xi Jinping, applaud during a deal-signing ceremony on the sidelines of the Belt and Road Forum in Beijing in 2017.Credit:AP

The world’s fourth most-populous nation has traditionally had an independent foreign policy, maintaining neutrality, and it is less than 18 months since its last major stand-off with China over fishing rights near the Natuna Islands.

But there have been signs of Indonesia deepening its reliance on China as strategic competition has escalated in the region.

It is a key supporter of China’s Belt and Road Initiative, and Chinese investment in the country is only expected to rise. Already, there are reports of negotiations taking place to increase China’s stake in the flagship Jakarta-Bandung high-speed rail network.

“You have paid more visits to China than any other foreign minister since the outbreak of the COVID-19, which fully demonstrates the high density of exchanges and interactions between China and Indonesia and the high level of mutual trust and cooperation between the two countries,” Wang told Marsudi after their meeting in Guiyang.

Derek Grossman, a defence and security analyst at American think tank RAND Corporation, wrote in Foreign Policy this month that China was motivated to lift engagement with Indonesia “to have a friend in regional disputes, secure access to Indonesian resources, and perhaps leverage Indonesia as a strategic bulwark against Australia”.

After meeting in Cornwall on the weekend, Biden and G7 leaders announced a global infrastructure challenger to China’s BRI called the Build Back Better World (B3W) initiative and pledged 1 billion vaccines to poorer countries.

Indonesia is experiencing its largest spike in COVID-19 cases since February with officials saying hospitals are at 75 per cent capacity in Jakarta.