We have made our live coverage of the coronavirus pandemic free for all readers. Please consider supporting our journalism with a subscription.

The Australian Medical Association has cautiously backed the national plan for reopening and says there is no need to vaccinate children as a prerequisite to ending lockdowns.

However, it warned cities with major outbreaks may need to reopen slower than planned to prevent overwhelming hospitals.

In what it describes as a “middle ground” position paper released today, the peak medical body broadly backs the Doherty Institute’s thresholds for reopening the country once 70 and 80 per cent of the population aged 16 and over is vaccinated. 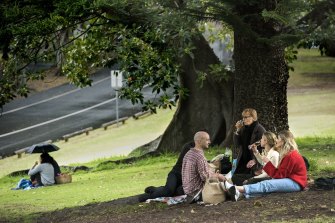 Residents in some parts of Sydney began picnics this weekend ahead of further reopening next month.Credit:Steven Siewert

But it warns policymakers that easing restrictions with a large number of new infections each day risks overloading contact tracers and hospitals, and calls for the maintenance of “high-impact public health measures” for longer in Sydney and Melbourne.

“There’s a lot more at stake here than just our ability to go back to our normal lives and go out for dinner,” AMA federal president Omar Khorshid said.

The communique comes amid debate about whether 12- to 15-year-olds – who are now eligible for a Pfizer jab – should be vaccinated before lockdowns end, and whether the thresholds for reopening should be more ambitious.

Perth-based Dr Khorshid said it was not necessary to wait until that teenage cohort was vaccinated before opening borders. Instead, the AMA is calling for all age groups to be included in vaccination targets for the final “phase D” of the reopening plan, which largely resembles pre-COVID settings.

France could suspend military co-operation and trade talks with Australia

French outrage at Australia’s decision to abandon a $90 billion submarine deal has escalated to a dramatic new level with President Emmanuel Macron recalling his ambassador from Canberra amid warnings that future trade deals and military ties between the nations are in jeopardy.

Recalled ambassador to Australia Jean-Pierre Thebault has told The Sydney Morning Herald and The Age that Australia engaged in “lies and treason” for 18 months behind his nation’s back. 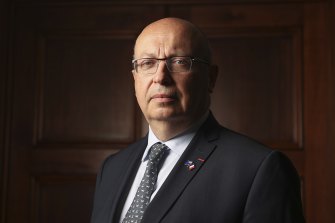 French ambassdor to Australia Jean-Pierre Thebault says there has been a breach of trust between the two countries.Credit:Alex Ellinghausen

Paris took the extraordinary step of recalling its ambassadors from both Australia and the United States yesterday, citing “unacceptable behaviour between allies and partners” stemming directly from Australia’s decision to walk away from the French deal and buy a nuclear-powered submarine fleet from the US and Britain instead.

Mr Thebault said there was an “intentional breach of trust” and “when something serious happens between two countries, really serious, there is a need for reassessment, and obviously consultation at high levels”.

“For us clearly, such a decision announced without any prior consultation – not just a phone call, but real consultation due to the scope of the consequences – marks a real breach of trust,” he said.

France has recalled its ambassador from Canberra only once before, in 1995 at the height of tensions over French nuclear testing.

Mr Macron’s decision to recall US ambassador Philippe Etienne to Paris for consultations was the first time that action had been taken in the history of their alliance, which dates back to 1778.

Good morning and welcome to today’s live coverage. My name is Natassia Chrysanthos and I’ll be running the blog until early afternoon.

Before we begin, these were the key headlines yesterday: