The tragic failures that led up to schizophrenic mother drowning her four-year-old boy in lockdown: How authorities stopped visits despite her telling nurse she tried to kill him three years earlier

Health visitors and social workers stopped keeping tabs on a schizophrenic mother who later drowned her four-year-old son in the bath after she showed signs of progress, an investigation found.

Nigerian Oluwakemi Badare, 37, will stay in a mental health hospital indefinitely after she was sentenced at the Old Bailey today over the death of her ‘much-loved’ son Kingswealth.

She held her struggling son under the water for more than a minute at their home in Invermore Place, Plumstead, southeast London, on December 27, 2020.

Badare, who has received mental health treatment since 2012, told nurses she had tried to drown her son three year’s earlier.

A subsequent investigation carried out by Badare’s local authority, Royal Borough of Greenwich Council, stated that a ‘robust’ Child in Need (CIN) plan was put together at the time of Kingswealth’s birth in 2016.

It stated: ‘The decision to end the Child In Need (CIN) plan in June 2019 is understandable given the progress made, the apparent lack of concerns and the number of other agencies who would continue to be involved.

‘However, no other agency then picked up a key worker role or initiated team around the family meetings.

‘There was no organised step down from the CIN plan which would have clarified roles in the professional network supporting [Kingswealth] and his mother.’ 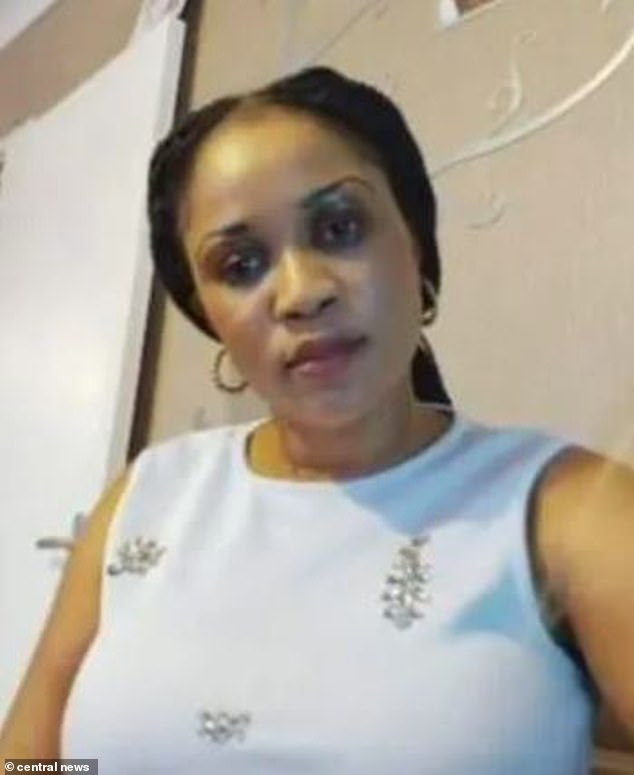 Nigerian Oluwakemi Badare, 37, suffers from paranoid schizophrenia and has been treated for mental illness since 2012. She and her son went through periods of supervision and regular meetings with agencies in the years before the toddler’s death

The report also stated: ‘The health visiting service was concerned about aspects of [Badare’s] parenting and wanted the CIN plan to continue and made this point to the social worker.

‘However, when the CIN plan ended, the health visiting input was also reduced as [Kingswealth] was moved from Universal Partnership Plus to Universal Plus level of service.

The report also stated that the Covid lockdown may have contributed to the pair’s isolation, adding: ‘When [Badare’s] mental health deteriorated, there appeared to be no family members or community members in contact with her to identify her changed mental state as there had been in 2017.

‘The loss of social contact due to Covid social restrictions may well have played a part in this though there is little clear evidence on this issue.

‘The capacity for preventive action by society including family and friends was reduced just as the parent’s capacity to protect was also reduced.’

On the day of the tragedy, Badare gave conflicting accounts when she called emergency services to her home.

Police found the antipsychotic medication she was supposed to be taking in a rubbish bin on the landing near to where her son’s body was discovered.

An Old Bailey jury decided the mother had deliberately killed her son. Badare has been in a secure mental hospital receiving treatment. 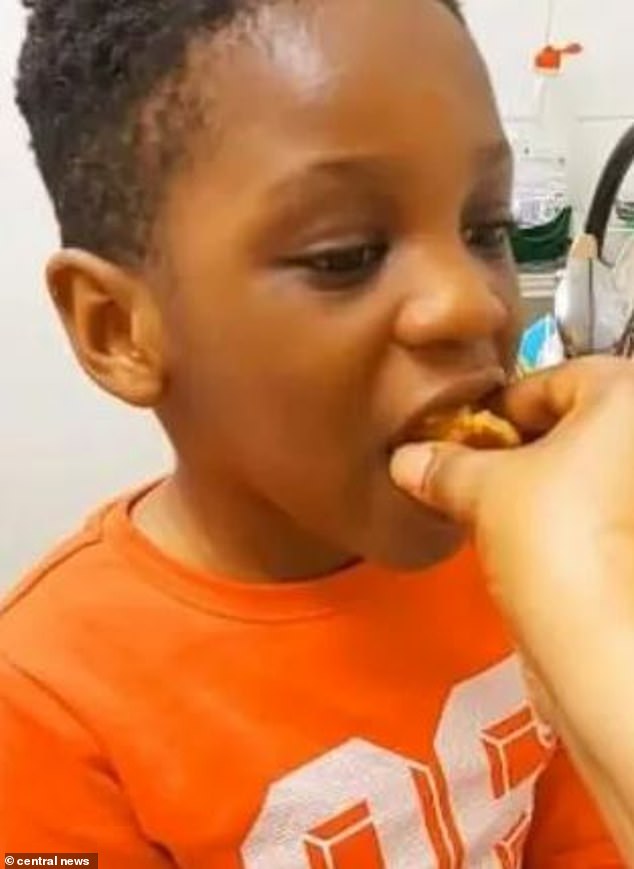 The jury heard that paramedics found four-year-old Kingswealth Badare’s (pictured) wet body at the top of the stairs outside the bathroom. His scalp was covered in scratches from being held underwater by his mother

‘There is no doubt from other evidence in the case… that Kingswealth was greatly loved and very well cared for by you.

‘These tragic events clearly occur as a result of the fact that at the time you were extremely unwell a situation no doubt exacerbated by the fact that you had stopped taking your medication.

‘Given the events of 2017 to which I have referred and your overall mental health history one cannot help wondering whether with closer supervision and if your illness had been better managed this tragedy might have been avoided.’

Brenda Campbell, QC, defending, said that Kingswealth was a ‘much loved child’.

‘There is evidence that Ms Badare provided a loving and safe home environment for him.’

Ms Campbell told the court that her client and her son went through periods of supervision and regular meetings with agencies in the years before the toddler’s death.

In June 2019, the meetings were ‘dropped’ and changes were made to Ms Badare’s mental health care, the court heard.

It is said a doctor changed Ms Badare’s diagnoses from long standing paranoid schizophrenia to depression with psychotic symptoms.

Ms Campbell added that there was also a change in the administration of her client’s medication.

‘The reality must be that both had a significant impact on what happened on 27 December 2020.

‘This is a lady who had sought help, had been willing to receive help but at the time of her son’s death was having very little support indeed.’ 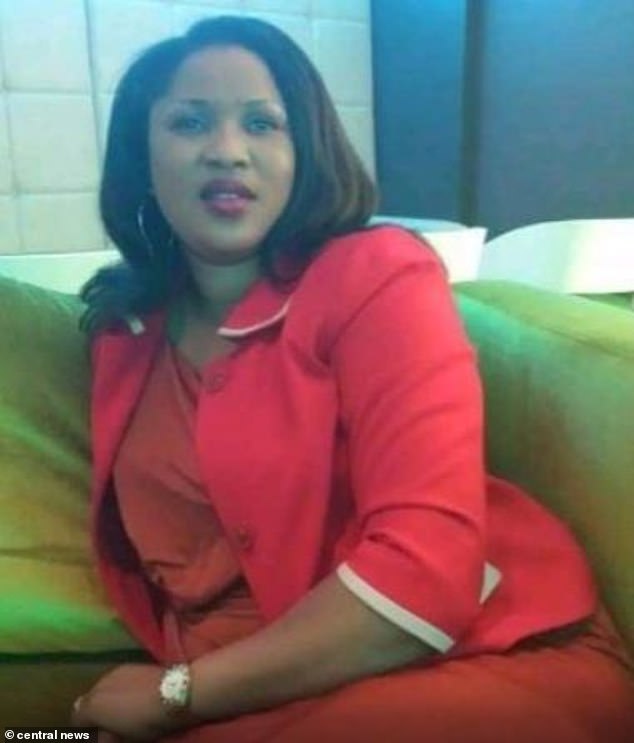 Paranoid schizophrenic Oluwakemi Badare (pictured), 37, called emergency services to her home in Plumstead, on December 27, 2020, after drowning her four-year-old son in the bath while he said, ‘Mummy, please don’t kill me’

Prosecutor Duncan Atkinson, QC, earlier told the jury that injuries to Kingswealth, including scratches and bruises to the front, sides and back of his scalp, were consistent with deliberate drowning.

‘The defendant told the emergency operator, who had asked her if the patient was breathing, that he was not and added that she had killed her four-year-old son.

Paramedics attended within ten minutes of the call and found Kingswealth’s naked body on the landing at the top of the stairs.

‘She became calm and said that they went for a bubble bath last night and that when she put him in the water he screamed as it was cold,’ Mr Atkinson said.

She told Mr Goh this happened at midnight.

The prosecutor continued: ‘Paramedics noted that Kingswealth’s body was wet and there were bubbles on it. He was not breathing. His hair was waterlogged and there was water in his ears.

‘It was noted that the child’s jaw was stiff, his limbs were stiff, his lungs were full. It was considered…that there was no point to attempting resuscitation as rigor mortis had already set in.

‘Kingswealth was confirmed to be dead.’

Police then arrived and spoke to Badare who was noted to be ‘restless’, the court heard.

She asked to see her son’s body but her request was refused. Following her arrest, she told the officer: ‘Yes, I forgot him in the bath.’

Badare collapsed as she was taken downstairs and sobbed: ‘I fell asleep.’

The mother had relapsed after in her treatment as an in-patient for paranoid schizophrenia in 2017.

‘At the time of her treatment in 2017 she was suffering from delusions,’ Mr Atkinson said.

‘She reported to a nurse during her subsequent in-patient admission to hospital that she had held Kingswealth under water for less than a minute when she believed that she was under surveillance.

‘She said that she believed that there were people watching her and would harm her son.’

This was recorded by hospital and child care services, but Kingswealth was returned to his mother’s care in March 2018.

By the time of the killing she was not taking her anti-psychotic medication, the court heard.

After she was arrested, Badare told a custody nurse Jacqueline Donohoe that her son had told her ‘Mummy don’t kill me’ before she drowned him.

Mr Atkinson added: ‘The prosecution suggest that it is unlikely to be a coincidence that, when unwell, the defendant should try to drown her son in 2017 and yet in 2020, again when she was unwell, Kingswealth should actually drown by accident rather than through an act by his mother.

‘The circumstances in which the body was found and the comments made by the defendant that she had killed her son, and that he had told her ‘”mummy don’t kill me”… underpin the prosecution contention that the defendant did the act of killing her son that is the act that needs to be proved for a charge of murder.

‘At the very least, however, the defendant’s account that she had left her son in the bath for a number of hours unsupervised and forgot about him allows for the conclusion that the act she was responsible for was manslaughter.’

‘That failure by her caused his death.’

Originally from Nigeria, Badare came to the UK in 2009, giving birth to Kingswealth in April 2016.

He was described as a ‘healthy and active’ boy before he died.

Badare was unfit to stand trial for murder and an alternative charge of manslaughter by gross negligence.

Instead, jurors were asked to consider whether she did the acts alleged: either that she drowned Kingswealth deliberately or that he died by accident.

The jury deliberated for nearly nine hours and found that Badare intentionally killed her son following a four day trial.

She has been detained in Bethlem Royal Hospital under sections 37 and 41 of the Mental Health Act 1983.