A Chinese auto show girl has been filmed wrapped in a black sheet and carried off the stage by a dozen security guards after she urged people to avoid buying the cars that she was supposed to promote.

The woman ran onto the stage during an international motor show in Beijing on Saturday after she claimed she had been mistreated by her employer.

Footage shows the crying model standing next to a display vehicle from Chinese automotive brand Geely as she told the crowd not to buy the cars. 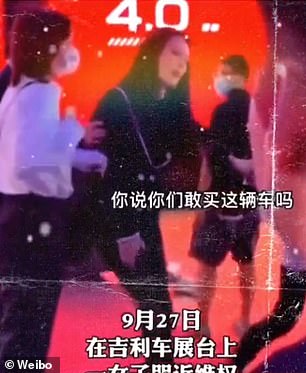 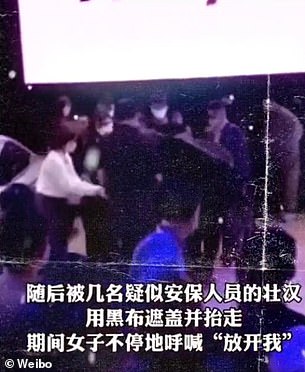 Chinese media initially reported that the woman was a Geely owner. But a senior executive from the Chinese motor company denied the claim, adding that she was a car model hired by an event management company.

The incident sparked outrage on Chinese social media after footage of the woman being tackled and carried off the stage was widely shared over the weekend.

The woman is seen in the clip crying on the stage as she claimed she had been treated unfairly by her employer who did not care about her.

She can be heard shouting at the crowd in the video: ‘Do you guys think you would dare to buy this car,’ hinting that the vehicles were unreliable.

After a few staff members failed to drag the car model off the stage, the woman was then wrapped in a giant black sheet.

She was screaming ‘don’t touch me’ and ‘let me go’ as she was carried off the stage by a group of security guards. 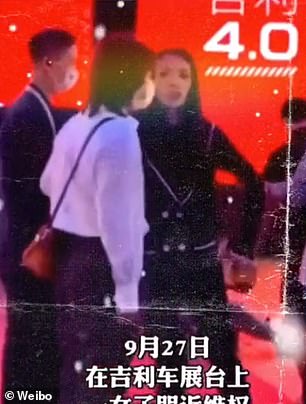 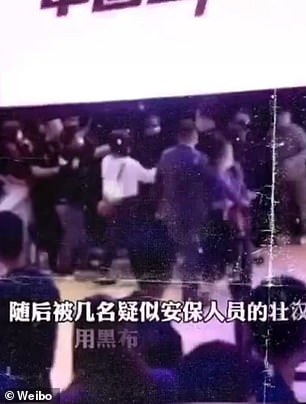 It was initially reported that the woman was a Geely owner. But a top official from the Chinese motor company denied the claim and said that car model was hired by the eventcompany

Yang Xueliang, the vice president of Geely, later said in a social media post that the auto show girl had been employed by another company which was hosting the motor event.

He also attached a formal apology letter issued by the event management company, which said the car model had been ‘unsatisfied about some adjustment at work’ and ‘lost control of her emotions’.

‘[She] ran onto the stage from the back, hitting the display vehicle and attacking the staff members who were trying to restrain her,’ the statement read.

‘To prevent the situation from worsening and the woman from being injured, our security staff covered her in a sheet, removed her and called police.’ the company added.

The woman is said to have reached an agreement with her employer at the police station.