Washington: Top US Republicans on Sunday (Monday AEST) sought to portray their expected ouster of Representative Liz Cheney as an act of unity, despite warnings that the move could deepen divisions over former President Donald Trump and sink party hopes in the 2022 elections.

In the strongest sign yet that Cheney faces defeat in a party vote expected on Wednesday, the top Republican in the House of Representatives said he would back congresswoman Elise Stefanik to replace the Wyoming Republican as chair of the 212-member House Republican Conference. 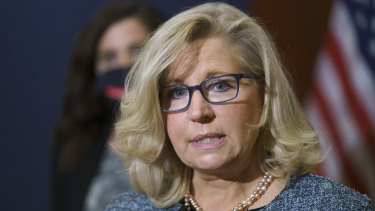 Republicans hope to reclaim majorities in the Senate and the House of Representatives in next year’s congressional elections. Most lawmakers have sought to placate Trump and the Republican voters who enthusiastically support him, despite the loss of both chambers and the White House during his presidency.

House Republican leader Kevin McCarthy and Representative Jim Banks, who heads the Republican Study Committee, a leading conservative caucus, said Cheney is under fire as a party leader because of her repeated criticism of Trump’s falsehood that the 2020 election was stolen has distracted from party messaging against Democratic President Joe Biden’s agenda.

“We need to be united and that starts with leadership,” McCarthy told the Fox News program, Sunday Morning Futures.

“We want to be united moving forward, and I think that’s what will take place.” 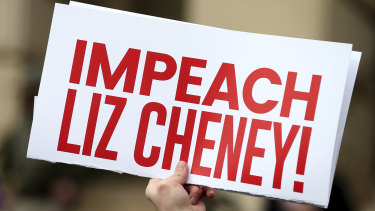 A protester holds an “Impeach Liz Cheney” sign during a rally against her in Wyoming in January. Credit:AP

Asked if he supports Stefanik for Cheney’s position, McCarthy replied: “Yes, I do.”

Stefanik, a 36-year-old from New York state whose status in the party rose after she aggressively defended Trump during congressional hearings ahead of his 2019 impeachment, is also supported by No. 2 House Republican Steve Scalise and by Trump himself.

Cheney was among 10 House Republicans who voted to impeach Trump on a charge of inciting insurrection after hundreds of his supporters stormed the US Capitol on January 6 in a riot that left five people dead including a police officer.

The daughter of former vice-president Dick Cheney, Liz Cheney has continued to criticise Trump for repeating falsehoods about his election loss to Biden and has called on Republicans to become the “party of truth” by rejecting his claims. 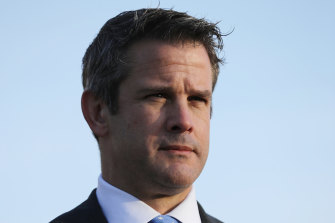 “Any leader who is not focused on pushing back against the radical and dangerous Biden agenda needs to be replaced,” Banks, whose caucus represents about 70 per cent of the House Republican conference, told the Fox News Sunday program.

But while McCarthy and Banks cast Cheney’s likely ejection from the party leadership as a step toward unity, others said Wednesday’s vote would only deepen divisions that could sink the party.

“Right now, it’s basically the Titanic. We’re in the middle of this slow sink. We have a band playing on the deck telling everybody it’s fine,” Republican Representative Adam Kinzinger, who also voted to impeach Trump, told CBS’ Face the Nation program.

“We had the worst four years we’ve had – ever – in the Republican Party, losing the White House, the House of Representatives and the Senate. And successful politics is about addition and multiplication, not subtraction and division,” Hogan said.

Cheney held off an initial challenge to her House leadership position earlier this year.

She also faces an uphill 2022 re-election battle in her home state of Wyoming, where Trump is working to defeat her as the state’s sole House member. She and the former president each received nearly 70 per cent of Wyoming’s vote in November.