‘Reckless’ BMW driver, 24, who killed a decorated ex-Royal Marine, 63, in a road rage row after aiming his car at him and sending him flying ‘high in the air’ in front of his family is jailed for 16 years

A ‘reckless’ BMW driver was today jailed for 16 years for killing a Royal Marine war hero by ramming him during a road rage row as his family watched in horror.

Window fitter Tarkan Agca aimed his BMW 320i hatchback at Andrzej Szaruta – a former sergeant major in the Royal Marine Commandos and then fled the scene, leaving his victim lying in a pool of blood on the ground.

His victim was on his way to a special family outing organised by his son when he was struck by Agca’s car near Stonehenge, Wiltshire, sending him ‘high in the air’ and causing fatal head injuries. 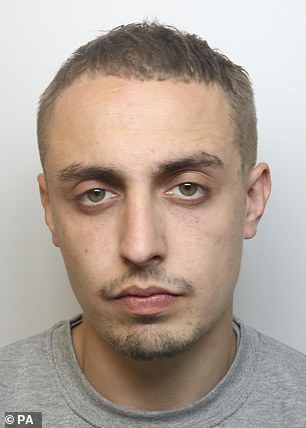 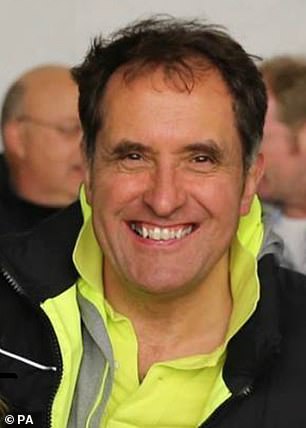 Tarkan Agca (pictured left), of Watford, Hertfordshire, entered a plea of guilty to manslaughter last month at Winchester Crown Court where he had been due to stand trial accused of the murder of 63-year-old Andrej Szaruta (right), from Bridgwater, Somerset 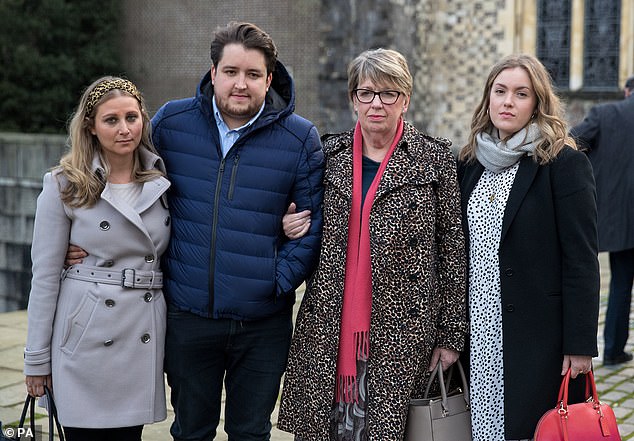 Susan Szaruta (2nd right), her daughter Rachel (right) and son Christian (2nd left) pose for a photograph after speaking to the media outside Winchester Crown Court where Tarkan Agca was sentenced to an extended prison term of 16 years for the manslaughter of ex-Royal Marines sergeant major Andrej Szaruta

The 63-year-old – who was awarded medals for serving in the Falklands War, two tours in Northern Ireland, and the Bosnian War – had been with his family celebrating his birthday when he was killed.

Mr Szaruta had been driving his silver Mercedes C320 Sport with his wife Susan and daughter Rachel as they travelled to see 32 year old son Christian, who had arranged a father-and-son race car experience day in London as his belated birthday present.

They were ‘tailgated’ by 24-year-old Agca ‘for some time’ as both cars travelled eastbound along the A303 on June 23 last year.

The decorated war hero, from Bridgwater, Somerset, tapped on his brakes before Agca undertook him and slammed on his own brakes.

Mr Szaruta then pulled over to a slip road and got out to give Agca a ‘piece of his mind’ but was hit as his killer’s silver saloon car, which had a personalised number plate ‘Y2 TRK’, was used ‘as a weapon’.

Agca – who has 13 convictions for 28 previous offences, including for other road rage incidents – then roared off at speeds ‘far in excess of the 70mph limit’ and continued on his journey home to Watford, Hertfordshire. 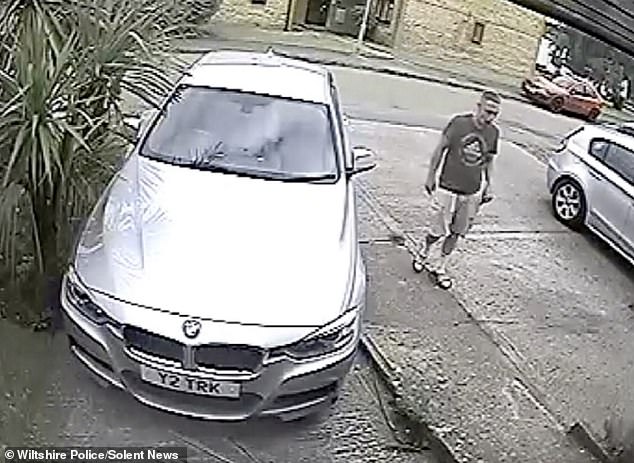 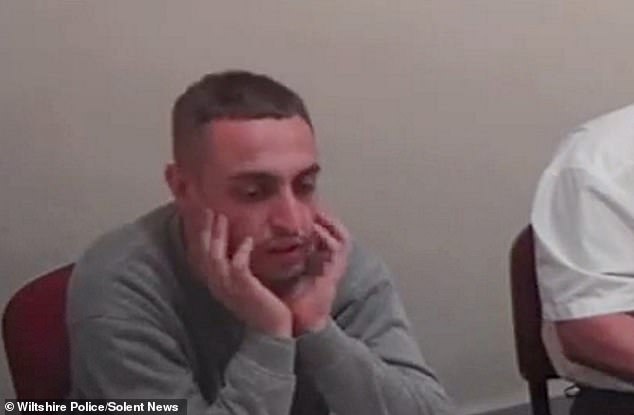 Tarkan Agca during a police interview. A BMW driver was today jailed for 16 years for killing a Royal Marine war hero by ramming him during a road rage row as his family watched in horror

He was arrested the following day and initially denied murder, but later admitted manslaughter on the first day of his trial at Winchester Crown Court, Hampshire, on December 3.

Sentencing at Winchester Crown Court today, Judge Mrs Justice May handed Agca an extended sentence of 16 years and banned him from driving for 10 years and four months

She said: ‘You killed Andrzej Szaruta when you drove your car at him. You had been dangerously tailgating Mr Szaruta’s car. There can be no justification for that style of driving.

‘There is no doubt from the witnesses that he was angered by your manoeuvre and, no doubt, scared for his family and his car.

‘He had pulled over and beckoned for you to come over to him. Instead of driving on, you did pull in after him.

‘He got out of his car to remonstrate with you, you drove at him, in effect using your car as a weapon. 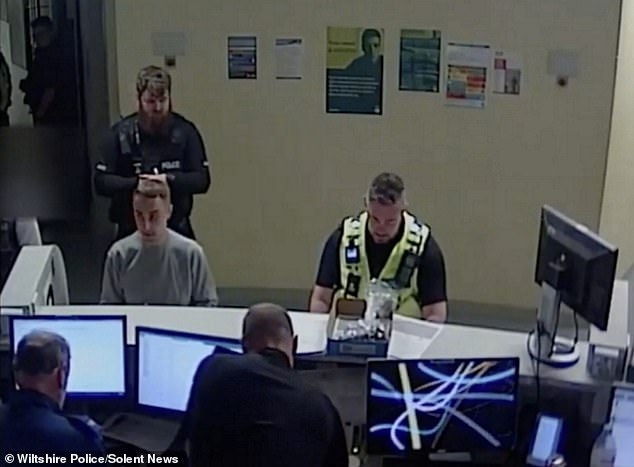 Tarkan Agca aimed his BMW 320i M Sport at Andrzej Szaruta, a former sergeant major in the Royal Marine Commandos and fled the scene, leaving him lying in a pool of blood on the ground 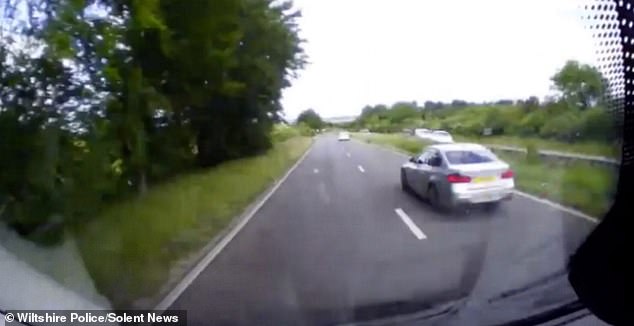 Mrs Szaruta recalled jumping out of the car and rushing to her husband’s side following the crash. She feared her husband would die as he was airlifted to hospital alone

‘You never intended that Mr Szaruta should be killed or even badly injured by your actions, but they were dangerously reckless.’

She described Agca as having ‘serious anger management issues’.

Mrs Szaruta recalled jumping out of the car and rushing to her husband’s side following the crash. She feared her husband would die as he was airlifted to hospital alone.

In a statement, she said: ‘When I reached him, he was lying on the floor with blood around him.

‘This image of my husband is burned into my memory and I get flashbacks of the scene every day.

‘I have been expecting Andy to walk through the door or be next to me when I wake. I’m finding it difficult that this will never happen and I will never see him again.

‘By the end of the day, I’m emotionally and physically exhausted. I have lost my husband and my best friend and I endure the memory of what happened.’

Daughter Rachel Szaruta said her father was the ‘bravest’ man she knew, adding: ‘I keep thinking how he did not deserve such an ending.’ 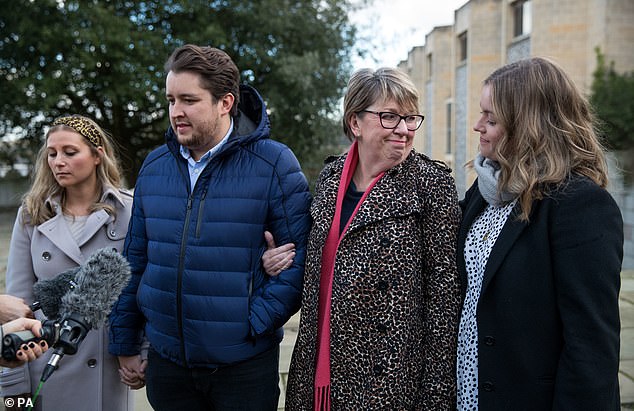 Susan Szaruta (2nd right), her daughter Rachel (right) and son Christian (2nd left) speak to the media outside Winchester Crown Court where Tarkan Agca was sentenced to an extended prison term of 16 years for the manslaughter of ex-Royal Marines sergeant major Andrej Szaruta who he hit with his BMW car in a road rage incident in June 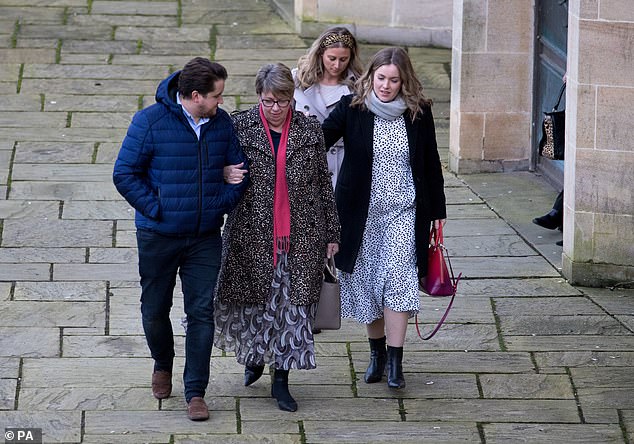 Christian Szaruta (left), his mother Susan and sister Rachel (right) leave Winchester Crown Court after Tarkan Agca was sentenced to an extended prison term of 16 years for the manslaughter of ex-Royal Marines sergeant major Andrej Szaruta who he hit with his BMW car in a road rage incident in June

Defence barrister Kevin Malloy told the court: ‘The deceased’s wife said that her husband had made a hand gesture towards the defendant, indicating to him, she thought, to pull over.

‘And when he did pull over, she saw him get out of the car, leaving the car door open and walking towards the rear of the car to give the driver a piece of his mind.’

He added: ‘It was a tragic occurrence, one that my client is deeply remorseful of.’

In a statement released after his death, his family said: ‘Andy was a sergeant major in the Royal Marine Commandos for 22 years, gaining medals for serving in the Falklands War, two tours in Northern Ireland, and a Nato medal during the Bosnian War.

‘Prior to the incident, Andy was travelling to London with his wife and daughter to visit [his son] Christian and his fiancée for the weekend.

‘Christian had organised a surprise belated birthday day out, a father and son race car experience day, which sadly they did not get the opportunity to enjoy.’

Upon retiring from the Marines, Mr Szaruta had worked as a facilities and operations director and supported his son in his racing career at circuits throughout the UK and Europe.

He shouldn’t have been on the roads: Grieving family relive the moment driver killed father

Speaking after the case, wife Susan recalled her horror at watching Agca drive into her husband,

The 63-year-old added: ‘It was traumatic. Everything happened so quickly, we just didn’t have the chance to do anything.’

Her son Christian, who lives in Clapham, London, said: ‘My mum and sister were in the car when it happened and they were obviously fairly panicked.

‘A number of people pulled over and stopped, and provided assistance – they stayed with my mum and sister, stayed with my dad throughout the whole thing.’

The 32-year-old recalled searching Agca’s name once he was named as his father’s killer.

Christian said: ‘After I was given his name, the first thing I did was Google it and found a press release from a year or so ago where he’d been disqualified from driving dangerously.

Sales director Christian – who has fond memories of his father watching him race across the country – added: ‘Nothing is going to bring my dad back but I think we can take some comfort in knowing Agca is going to take some time thinking about what he’s done.

‘My dad was a Royal Marine for 22 years, served in the Falklands, flew helicopters over Northern Ireland.

‘Our family was his priority and he spent a lot of time focusing on us. He would come home from holidays early, drive all over the country to look after me on race weekends when I was racing my car.

‘He would do absolutely anything for us so we are devastated he’s gone.’

The family have since raised more than £6,000 for Wiltshire Air Ambulance and the neurology unit at University Hospital Southampton NHS Foundation Trust.