The Bank of England today announced it will buy long-term government debt in a bid to ease market chaos threatening to cause a financial meltdown.

In a highly unusual move, Threadneedle Street said it will step in after the ‘significant repricing of UK and global financial assets’ since Kwasi Kwarteng’s tax-cutting Budget.

‘This repricing has become more significant in the past day – and it is particularly affecting long-dated UK government debt. Were dysfunction in this market to continue or worsen, there would be a material risk to UK financial stability,’ the statement said.

‘This would lead to an unwarranted tightening of financing conditions and a reduction of the flow of credit to the real economy.’

There had been concern that pension funds were struggling with the huge moves in gilts combined with the plummet in the Pound, with some said to have been urgently raising capital.

‘These purchases will be strictly time limited, and completed in the next two weeks. To enable the Bank to conduct this financial stability intervention, this operation has been fully indemnified by HM Treasury,’ a statement said.

‘The Chancellor is committed to the Bank of England’s independence. The Government will continue to work closely with the Bank in support of its financial stability and inflation objectives.’

The Pound had clawed back ground after reaching an all-time low of just $1.03 on Monday, but fell again this morning after the IMF criticised the ‘large and untargeted’ fiscal package.

Earlier, there was fury at the IMF urging Mr Kwarteng to perform a U-turn on his tax cuts in his next mini-Budget on November 23.

Meanwhile, White House economic adviser Brian Deese said he was not surprised by the response – warning the policy meant interest rates were more likely to rise.

‘In a monetary tightening cycle like this, the challenge with that policy is that it just puts the monetary authority in a position potentially to move even tighter. I think that’s what you saw in reaction,’ he said.

‘It is particularly important to maintain a focus on fiscal prudence, fiscal discipline.’

Mr Kwarteng tried to soothe nerves on the Conservative benches in a call with dozens of MPs last night, stressing the need for ‘cool heads’ and saying the government ‘can see this through’.

And some senior Tories have been arguing that the fall in the Pound has actually been driven by alarm that Labour might soon be in government.

With Keir Starmer up to 17 points ahead in polls, former MEP Lord Hannan wrote on the ConservativeHome website: ‘What we have seen since Friday is partly a market adjustment to the increased probability that Sir Keir Starmer will win in 2024 or 2025 – leading to higher taxes, higher spending, and a weaker economy.’ 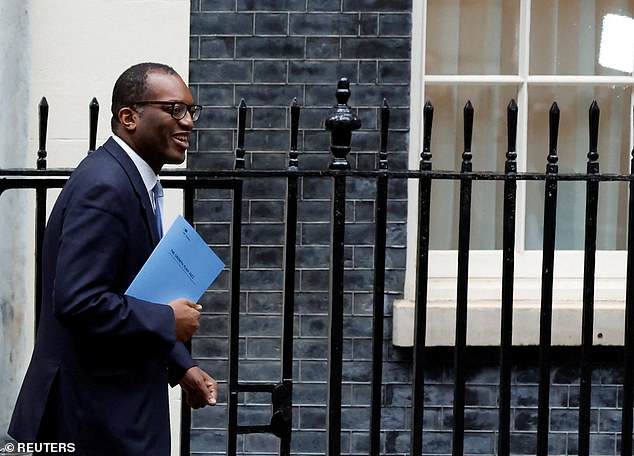 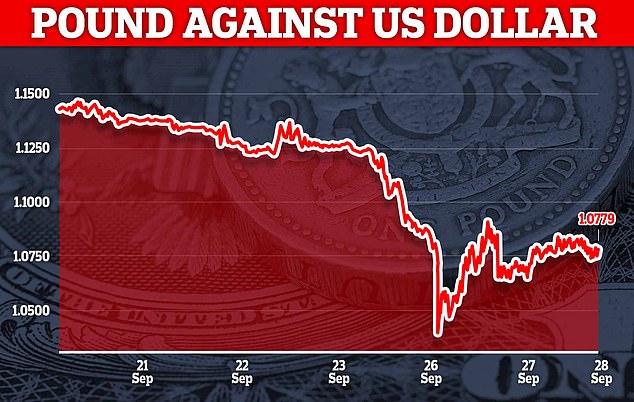 The currency had clawed back ground after reaching an all-time low of just $1.03 on Monday, but fell again this morning after the IMF criticised the ‘large and untargeted’ fiscal package

Sterling fell back to $1.06 this morning after recovering to $1.08 yesterday.

Fears are growing that the currency will be at parity with the greenback unless the UK Government can arrest the slide.

The dollar has been extremely strong worldwide, but the Pound has struggled even against that backdrop.

The IMF’s intervention was met with fury inside the Treasury, after a day when markets had calmed and some government bonds had rallied.

Tory veteran John Redwood said: ‘The IMF were very wrong, as was the Bank of England, over the inflation which they now rightly worry about. They didn’t warn us or the other central banks in the run up to the big inflation, that the monetary policies of 2021 were far too loose, interest rates far too low, and the money printing was getting out of control. It’s a great pity they didn’t warn about that.

‘Now they should be looking forward. We should be fighting recession. Of course, we must be prudent with finances. But the truth is that if the austerity policies have their way and we have a big recession, the borrowing won’t go down, the borrowings will soar.’

Sir John offered a robust defence of Ms Truss’s tax-cutting plan, while also offering a sharp message to the Bank of England against further intervention on interest rates: ‘My message today is that the Government are right to see the main threat for the year ahead is recession not inflation because the good news is that all forecasters say inflation will come down a lot next year, and the sooner the better.’

He told the Telegraph that the PM and Chancellor should merely ‘tune out’ the criticism.

One Tory MP said: ‘At the end of the day it’s up to the elected Government to set fiscal strategy. I’m confident ministers will deliver a growing economy.’

In response to the criticism a Treasury spokeswoman said: ‘We have acted at speed to protect households and businesses through this winter and the next, following the unprecedented energy price rise caused by (Vladimir) Putin’s illegal actions in Ukraine.’

The Government was ‘focused on growing the economy to raise living standards for everyone’ and the Chancellor’s statement on November 23 ‘will set out further details on the Government’s fiscal rules, including ensuring that debt falls as a share of GDP in the medium term’.

Mr Kwarteng told City investors yesterday he was ‘confident’ the biggest tax cuts in 50 years, at £45billion, will succeed.

He is expected to emphasise to investment bankers today that ministers are pursuing reform to enhance growth, including a ‘Big Bang 2.0’ measures to reduce red tape for the City. 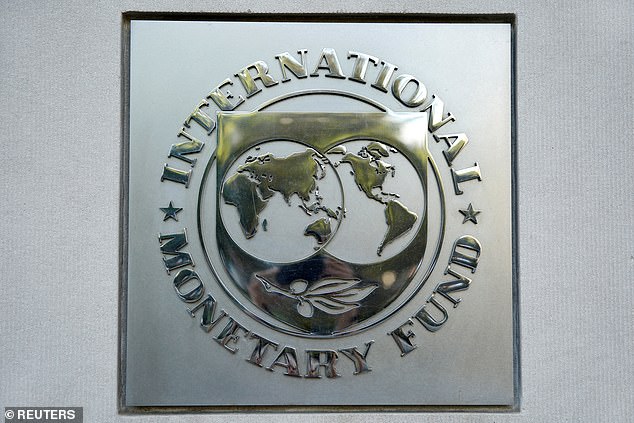 Meanwhile, there are mounting concerns about a mortgage crisis as the Bank of England prepares to hike interest rates.

Lenders have withdrawn dozens of products as they struggle to adjust to the expectations of higher costs.

Investors have been betting on an increase of up to 1.5 percentage points in interest rates on, or before, the next meeting of the Bank of England’s Monetary Policy Committee in early November.

The Bank’s chief economist Huw Pill warned Threadneedle Street ‘cannot be indifferent’ to the developments of the past days, seen as a signal the cost of borrowing will have to go up to protect the pound and keep a lid on inflation.

‘It is hard not to draw the conclusion that all this will require significant monetary policy response,’ Mr Pill said.