The opening of the Bondi memorial to gay and transgender victims of hate crimes provoked strong emotions at Marks Park in Tamarama on Saturday, including for David McMahon.

McMahon was attacked in the park in 1989, just weeks after the body of John Russell was found at the base of the cliffs below the Bondi to Bronte walk, a death initially regarded by the police as misadventure.

“I never saw violence until it happened to me,” he said. 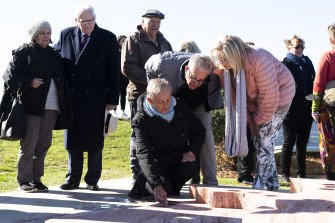 There was an emotional response to the opening of The Bondi Memorial: Rise at Marks Park in Tamarama on Saturday.Credit:Rhett Wyman

McMahon was one of several gay men who were assaulted or murdered at Marks Park during a decades-long wave of violence against LGBTQ people in Sydney.

McMahon said he did not visit the park for a long time and “even now, today, it was a bit much”.

“I wasn’t going to come today, but I decided, yeah, I should make an appearance,” he said. 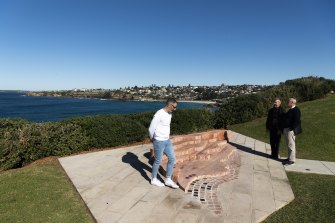 NSW Deputy Coroner Jacqueline Milledge said it was hard to imagine Marks Park was once the hunting ground of gangs of brutal individuals responsible for bashing, robbing, raping and murdering men “simply because they were gay”.Credit:Rhett Wyman

Several hundred people, including survivors of hate crimes and victims’ families, gathered in the scenic park for the opening of The Bondi Memorial: Rise.

Speakers included former NSW deputy coroner Jacqueline Milledge who led a 2005 inquest into the deaths of gay men, including Russell, that were not adequately investigated by the police. She found Russell and two other men had probably been murdered by gay-bashing gangs.

“It’s hard to imagine this beautiful part of Sydney was once the hunting ground of gangs of brutal individuals responsible for bashing, robbing, raping and murdering men – targeting them simply because they were gay,” she said.

Milledge described how McMahon was jogging in Marks Park when he was attacked by assailants who bashed and dragged him towards cliffs over which they said he would be thrown.

“He fought for his life and managed to escape with them chasing after him,” she said. “He screamed for help and a voice from the units in front yelled out: ‘We’re not helping any poofters.’ ”

The memorial features a six-level stone terrace representing the bands in the pride flag. Waverley Mayor Paula Masselos said the public artwork was inspired by the nearby ocean cliffs, “but reimagined as a staircase flipped to ascend towards the horizon”.

“The act of climbing inverting the act of falling, a pathway away from the history of violence, a history that is no longer, or ever was, acceptable,” she said.

Masselos said the memorial provided the opportunity for healing by confronting the past.

“For individuals who lost loved ones to these crimes and were deprived of both justice and recognition, there is deep pain that remains,” she said.

Herald journalist Greg Callaghan, whose Bondi Badlands book and podcast investigated the crime wave, said the park was a place of beauty, yet an “unbearably sad place for some”.

“This headland became a deadly epicentre,” he said. “A place where at least three gay men lost their lives.”

Callaghan said “so-called poofter bashing” had long been a feature of Australian society, but ramped up in the late 1980s during the HIV/AIDS epidemic and the rise of Sydney as a gay mecca.

“One of the trademarks of a gay hate crime is its relentless cold-blooded cruelty,” he said. “If robbery happens during an attack, it’s an afterthought. It’s a brand of hate stemming from prejudice and ignorance. And it can spread cancer-like among those susceptible to its message.”

ACON president Justin Koonin said the unveiling of the memorial was an important step in the journey towards healing and justice for gay and transgender victims of hate crimes.

Koonin said he hoped the upcoming Special Commission of Inquiry into LGBTIQ Hate Crimes, announced in April by NSW Premier Dominic Perrottet, would shed further light on “this dark chapter” in Sydney’s history.

“Questions persist about what happened during those dark times, cases remain open, there are people still at large who must be caught and, meanwhile, violence against LGBTQ people still continues,” he said.

Koonin said the memorial would stand as a beacon of hope that justice would prevail. “To those we have lost and those who survived, to their families and loved ones, your bravery propels us in our continued efforts to eradicate homophobia and transphobia in this state and beyond.”