Booze cruise! Out of work bar manager, 25, creates pub on WHEELS to bring pints and Prosecco to the doors of lockdown-weary Londoners

An out of work bar manager has created a pub on wheels to bring pints and prosecco to the doors of Covid lockdown-weary Londoners.

George Dean, 25, says he wants to bring back the ‘experience of a pub’ to make staying at home more bearable.

Mr Dean and his business partner Finn Bruce, 28, started Pub To Your Door – a service delivering beverages to people’s doorsteps – at the end of last month.

Drinks are driven around and poured from a refitted van, with the beer provided by Camden brewery.

The pair have plans to serve two alternating cocktail options, also on tap. 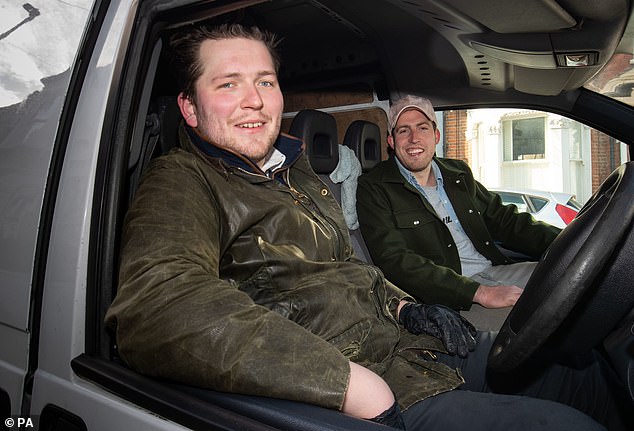 Former bar manager George Dean (pictured left), 25, and his business partner Finn Bruce (right), 28, who is a video director for their pub on wheels in Clapham, south London

He said that the idea for the business had come from his own bad experience of delivered alcohol.

‘I ordered some delivery pints from Deliveroo and it was absolutely shocking,’ he said.

‘This pint came, it was flat, it spilled everywhere, it was covered in clingfilm and I thought to myself ‘that’s not where hospitality should be, even if everywhere is closed’.’

After researching licencing online and buying the van Mr Dean had it fitted with a back bar and taps.

‘One of my friends is a carpenter so he did the carpentry work in the back and I’ve worked with Camden for years.

‘They helped me set up the bar itself,’ he said.

‘Me and my business partner got the ball rolling by starting an Instagram page and suddenly followers started to come in.’ 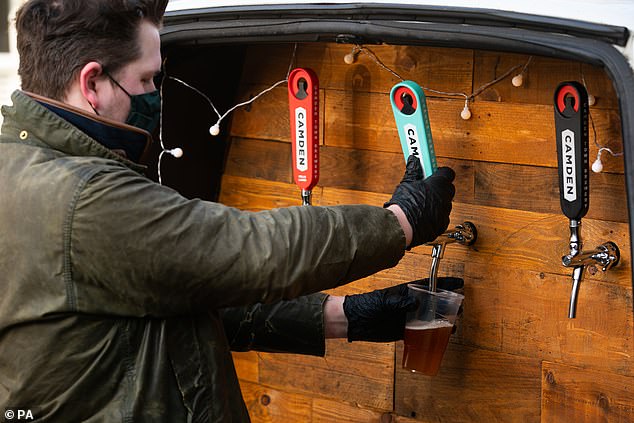 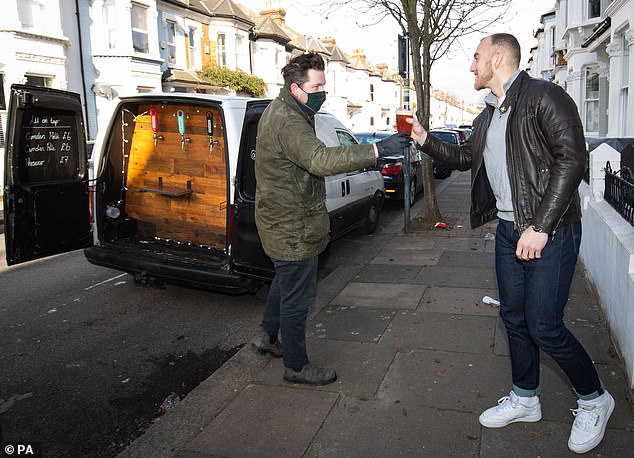 Mr Dean seen handing over a pint from his pub on wheels. Operations began three weeks ago but Mr Dean says he and his ‘co-pilot’ James Mair have already poured almost 600 pints

Mr Dean holds both a premises licence and a personal licence for selling alcohol and is able to provide the service as it is a delivery rather than a takeaway.

He added the business aimed to ‘bring people together and make them smile’ by recreating ‘the whole culture of a pub’, adding that he had been surprised by the pickup it had received.

‘The concept of delivering pints isn’t what I was after, I was after giving them the experience that everyone has missed, of standing at a bar,’ he said.

‘Being able to go up, grab your drink, have a bit of pitter-patter and then walk off. 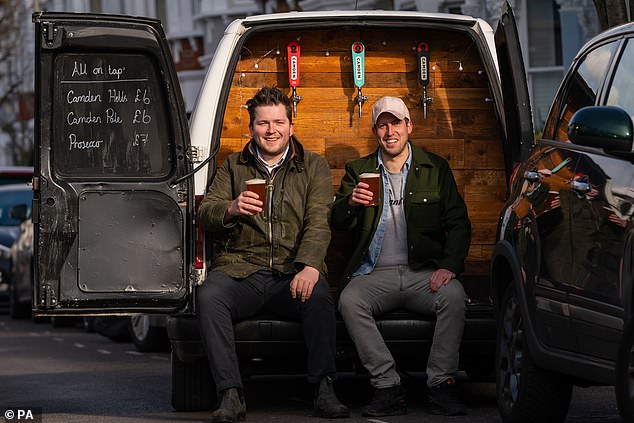 Mr Dean (left) and Mr Bruce (right) seen enjoying a pint while sitting in the refitted van. Mr Dean is able to provide the service as it is a delivery rather than a takeaway

‘It’s been amazing, I didn’t expect it to be so big and from that it’s really flown.

‘All these bubbles and households that I’ve gone to see they’re dead happy to see a face and have a laugh and have a pint.

Mr Dean says that once pubs are allowed to reopen he plans to make the business more events-based, providing drinks for street parties, birthdays and weddings.

‘It’s about the whole culture of a pub, bringing people together and making them smile that’s what’s key,’ he said.