London: A “frustrated” Boris Johnson has chastised fellow world leaders for shirking a key pledge to tackle climate change, warning history will judge them if they fail to step up.

The British Prime Minister, who hopes to make a breakthrough at November’s Glasgow climate summit a landmark achievement of his prime ministership, used a United Nations address to blast rich countries for not giving developing nations $100 billion a year to combat global warming.

Johnson said he was angry at the failure to meet the Paris Agreement promise because it was central to limiting the damaging impacts of climate change.

“Over the past year we’ve come together many times to discuss climate change,” he said. “So you know by now how this conversation goes.

“I talk about the need to rid the world of coal-fired power and internal combustion engines, the need to stop deforestation, and for developed nations to find that $100 billion.

“And everyone nods and we all agree that something must be done. Yet I confess I’m increasingly frustrated that the ‘something’ to which many of you have committed is nowhere near enough.

“And while progress is being made all over the world, the gulf between what has been promised, what is actually being delivered, and what needs to happen… it remains vast.” 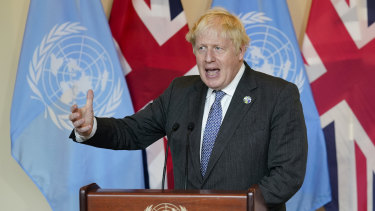 While he didn’t name names, Johnson said too many major economies were “lagging too far behind” and likened the current policy approach to picking low-hanging fruit from a tree.

The $US100 billion ($137 billion) pledge was made at the 2015 Paris climate conference. The Australian government contributed $US200 million to the so-called Green Climate Fund before Prime Minister Scott Morrison announced in 2018 that he would no longer contribute.

The government instead spent or promised more than $US1 billion in direct funding for projects in the Pacific and Indo-Pacific.

When the summit ends, when most of the world has committed to decisive, game-changing action, it will be clear to all which of us has lacked the courage to step up.

Experts have claimed Australia’s bilateral spending is not enough to help meet its share of the overall $US100 billion pledge. Johnson’s focus on meeting the funding target opens the door to Morrison lifting the government’s financial commitment at the COP26 climate summit in November.

US President Joe Biden is also expected to boost his contribution in the coming days.

Johnson has promised £11.6 billion between 2021 and 2026, most of which will come from the existing aid budget.

A new OECD analysis shows climate finance provided and mobilised by developed countries for developing countries totalled $US79.6 billion in 2019 – up only 2 per cent from 2018 and well short of the $US100 billion target.

The 2 per cent increase only happened thanks to funding boosts from multilateral institutions. By contrast, bilateral public climate finance commitments dropped, as did climate finance contributed from private sources.

OECD secretary-general Mathias Cormann described the result as “disappointing” and said more had to be done. Cormann was the Australian finance minister when the Morrison government decided to withdraw from the Green Climate Fund in 2018.

Johnson told leaders at Monday’s UN roundtable that acting on climate change would put them on the right side of public opinion “at home and on the international stage”.

“It’s a diplomacy issue, a security issue, a trade issue,” he said. “And in the years to come, the only great powers will be green powers.

“If you abdicate responsibility today, do you think those who pay the price for that decision will rally to your side tomorrow?

“Will they work with you, borrow from you, stand with you if you tell the world that you don’t care whether their land and their people slip below the waves? These countries need allies. They need help now, that’s why I stress the $US100 billion so much.”

Johnson plans to use a week in the United States to rally more support ahead of the Glasgow summit which begins in just 41 days.

“COP26 will be staged in the full glare of the global spotlight,” he said.

“And when the summit ends, when most of the world has committed to decisive, game-changing action, it will be clear to all which of us has lacked the courage to step up.

“The world will see, and your people will remember, and history will judge.”