It is ‘time to learn to live with Covid’: Downing Street warns UK will have to accept flu-like death figures of up to 20,000 a year in marked shift on messaging as country approaches July 19 with ‘no going back’ after Freedom Day

Boris Johnson took an increasingly hardline approach to ending lockdown on July 19 today, telling the Cabinet the country will have to ‘live with Covid in the future’.

Amid clear signals that ministers are increasingly set on ending draconian restrictions in three weeks come hell or high water, the Prime Minister highlighted that the link between infections and serious illness and deaths has been significantly weakened.

Downing Street said the Cabinet – including new Health Secretary Sajid Javid – ‘agreed that once we have completed the road map, we will be able to live with Covid in the future, even if cases continue to rise, thanks to the protections provided by the vaccine.’

It came as new figures showed that weekly Covid deaths have risen slightly in England but the virus is still only responsible for fewer than 100 fatalities every seven days .

An Office for National Statistics (ONS) report published today found that 74 people died directly from Covid in the week ending June 18, which was up 12 per cent on the week before. Wales recorded no deaths from the virus in the most recent week, for the first time since the pandemic began.

A separate study from scientists at Cambridge University found that fewer than one in a thousand people who catch Covid in England now die from the disease.

They estimate the overall infection fatality rate (IFR) of coronavirus has been driven down to 0.085 per cent thanks to the country’s hugely successful vaccine rollout.

The official data will give ministers confidence Freedom Day can go ahead next month as planned. 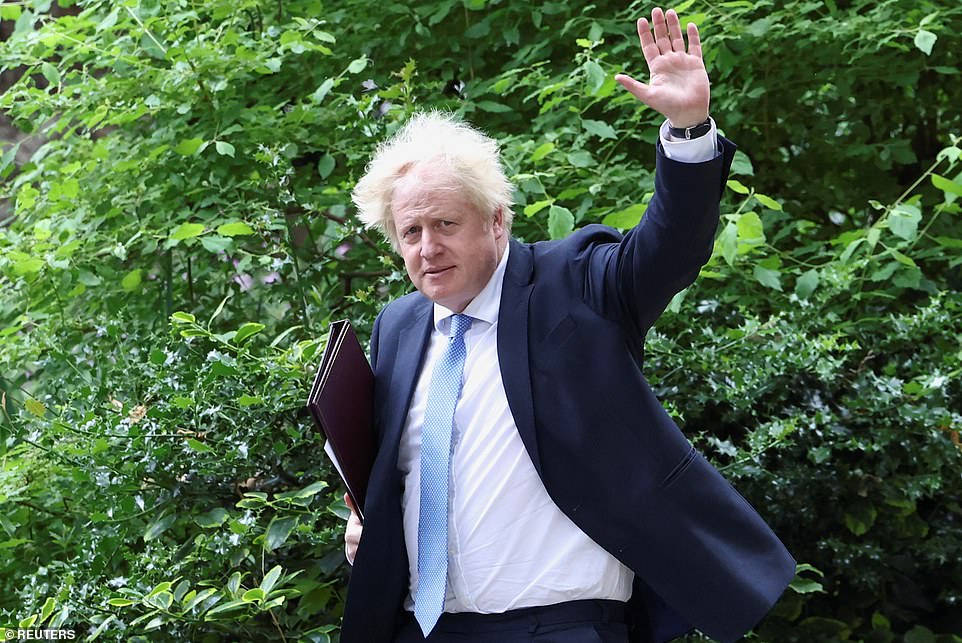 Amid clear signals that ministers are increasingly set on ending draconian restrictions in three weeks come hell or high water, the Prime Minister highlighted that the link between infections and serious illness and deaths has been significantly weakened. 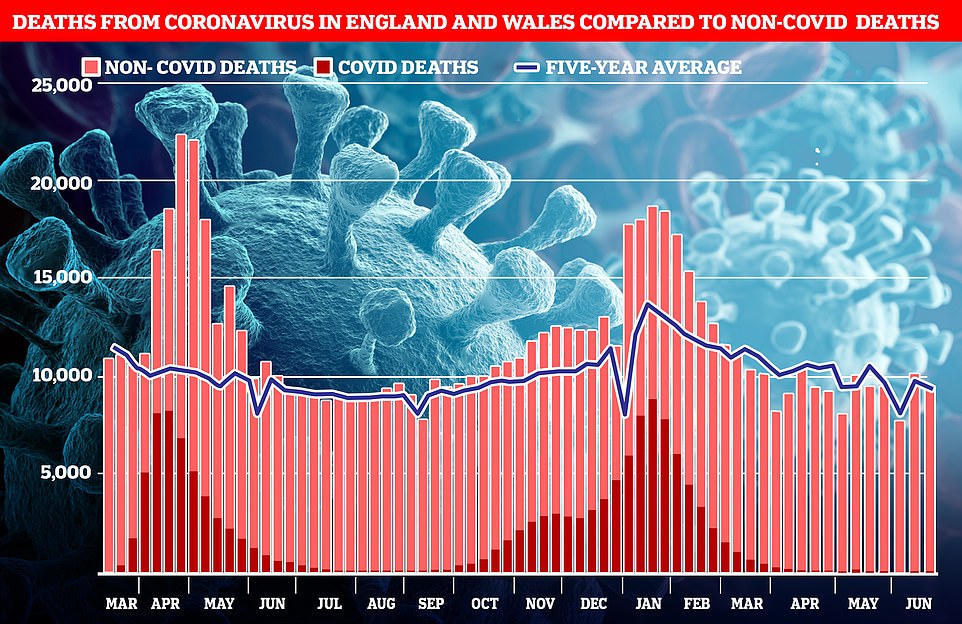 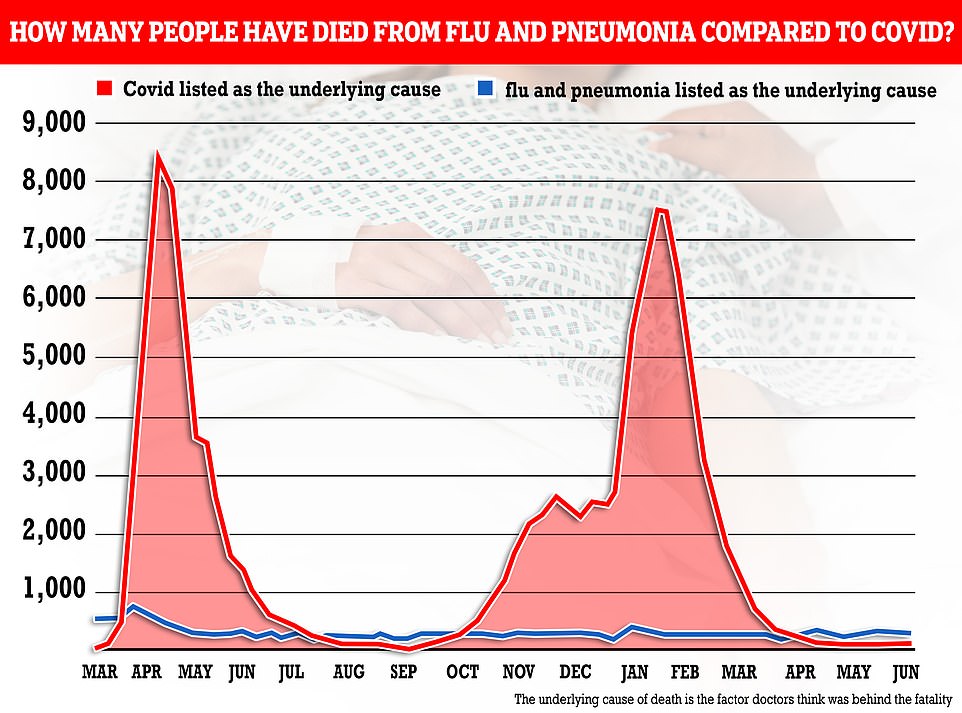 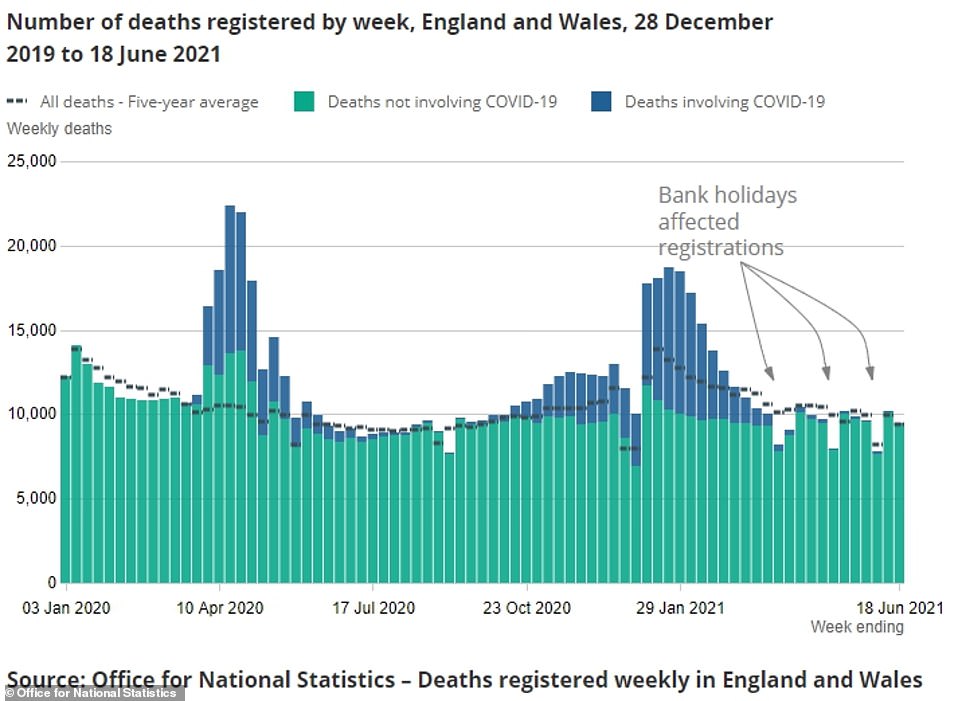 Fewer than one in 1,000 patients are dying from Covid now compared to one in 90 during second wave

Fewer than one in a thousand people who catch Covid in England now die from the disease, according to scientists at Cambridge University.

They estimate the overall infection fatality rate (IFR) of coronavirus has been driven down to 0.085 per cent thanks to the country’s hugely successful vaccine rollout. 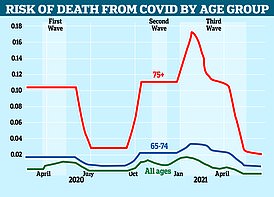 This graph shows the proportion of people who catch Covid that are dying from the disease by age group. The rate has fallen markedly among older people, who are most at risk from the virus, since the vaccine roll-out began in January

For comparison, the team at Cambridge’s Medical Research Council (MRC) biostatistics unit estimated that about one in 90 cases (1.1 per cent) resulted in death at the end of the second wave.

In the most vulnerable over-75s group, the IFR is now thought to be under 2 per cent after plummeting from 17 per cent during the winter peak in January.

Experts told MailOnline that while the findings were encouraging, the death rate will likely increase in the coming weeks as a result of the rise of the Indian variant.

The MRC ‘nowcasting’ unit estimates the number of infections that lead to fatalities based on official data including daily Covid cases, deaths and hospital admissions. It also takes into account asymptomatic cases who are missed by the centralised testing scheme.

Dr Simon Clarke, a microbiologist at Reading University, said it was likely the number of infections leading to deaths would rise in the coming weeks because of the rapid rise in cases over the past two months.

‘We also have got to remember that what we are dealing with now is an increasing situation (of cases) and an increasing rate of infection,’ he told MailOnline.

‘Most people who have had the infection are in the early stages of it so they won’t have died yet.

‘I think it will go up later on, but it won’t go anywhere near the one in 90 (at the peak of the second wave), but I expect more than one in a thousand.’

Asked whether the July 19 easing was likely to go ahead, he said this would ‘probably’ happen.

‘There is evidence — good evidence — it seems that the vaccine is working and the vaccines are protecting’ against serious disease and death, he added.

The Prime Minister’s official spokesman today told reporters that ‘as with other diseases such as the flu we will have to live with the virus’.

The Government will continue to publish daily coronavirus figures once restrictions have been lifted, according to Downing Street.

Asked if this is expected to continue, the Prime Minister’s official spokesman told Westminster reporters: ‘Yes. We will continue, and are continuing, to provide these updates through the dashboard that provide an important level of transparency to the public and ensure understanding how we are progressing.’

Asked how long this could go on for, the spokesman added: ‘We will keep it under review as we go forward but clearly now it is entirely right that we continue to provide this level of data and transparency to the public as the world continues to fight this pandemic.’

Earlier  Home Secretary Priti Patel said we will have to ‘adapt our lives accordingly’ in order to get freedoms back while at the same time living with coronavirus.

‘Look, I would love to take the mask off – but at the right time, I will do that,’ she told Times Radio Breakfast.

‘Yes, we have the vaccine, there’ll be boosters at some stage, booster jabs as well, so we are adapting our way of life.

‘I think to look to getting our freedoms back, which of course we all dearly want, we are adapting how we live and that means living with the concept of this pandemic, the virus, and obviously we adapt our lives accordingly.’

In England, 102 people who died in the latest week had Covid mentioned on their death certificate, up from 84 a week earlier. But only 74 of them were caused directly by the virus, with the others dying from other causes, the ONS said.

In total, there were 9,459 deaths registered in England and Wales in the most recent week, meaning just 0.78 per cent were caused by Covid – the equivalent of one in 127.

The fact weekly deaths have risen just 12 per cent in the past week despite cases quadrupling over the past two months highlight just how well the vaccines are severing the link between Covid infections and fatalities.

The Department of Health posted another 22,868 infections yesterday which was more than double the number a week prior. But there were just three deaths registered.

In a clear sign of the ‘vaccine effect’, the last time cases were at around 22,000 and rising was in early December, when there were roughly 400 Covid deaths a day and the second wave was starting to spiral.

Today’s ONS data also shows that, across England and Wales, flu and pneumonia are killing three-and-a-half times as many people as Covid.

Statisticians at the ONS sort all death certificates registered in England and Wales to record those that mention Covid and whether it was the main cause of death or the person had the virus alongside another illness.

The national agency’s figures lag behind the Department of Health’s daily total because it can take around two weeks to formally register a fatality, sparking a delay

The highest increase in Covid deaths was reported in the North West of England, but the region only recorded seven more deaths than the week before, 21 up from 14.