Brasilia: All Brazilians are required to be vaccinated against COVID-19 under the penalty of being banned from certain public services and places, the country’s top court has decided.

Ten justices of the 11-member court backed the mandatory inoculation with only one vote against in a virtual session held on Thursday, Brasilia time. The ruling is a blow to President Jair Bolsonaro, who has said he will not be vaccinated and nobody should be forced to.

According to a government statement after the decision, those who fail to prove they have been vaccinated may have their rights, such as welfare payments, public school enrolment or entry to certain places, curtailed. 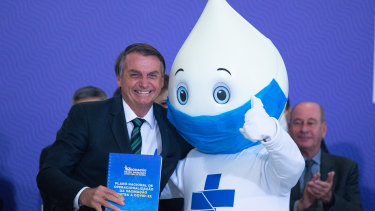 The court underscored the decision did not mean Brazilians would be taken by force to receive shots that will be offered by the government through the public health network.

Justice Ricardo Lewaandowski, who voted in favour, said that although vaccination without consent was “flagrantly unconstitutional”, “the collective health cannot be harmed by those who deliberately refuse to be vaccinated”, the G1 news website reported him as saying.

Vaccines against potentially life-threatening diseases such as measles and meningitis have long been mandatory for children in Brazil and the justices dismissed a separate case seeking to free parents from that obligation due to religious beliefs.

Bolsonaro has promised to make all COVID-19 shots approved by the health regulator available to the public, but at the same time has raised prospects of an ineffective mass inoculation campaign by discouraging Brazilians from participating in it.

“Nobody can force anybody to take the vaccine,” he said at an event in the north-eastern state of Bahia after the court’s decision. “We’re dealing with lives, where is our freedom?”

Brazil has recorded more than 7.1 million COVID-19 cases and lost more than 184,000 people to the disease, including more than 1000 on Thursday, the first time it broke the figure in over three months. More than 46,000 new cases have been detected every day in the past week.

But the number of Brazilians who are open to being inoculated against COVID-19 has declined to 73 per cent in December from 89 per cent in the beginning of August, according to a Datafolha survey. Those who are against taking the shots have risen to 22 per cent from 9 per cent in the same period. The poll firm interviewed 2016 people over the phone between December 8-10.

Although Health Minister Eduardo Pazuello has said he expects to have 25 million doses of three different vaccines ready by January, a date for a nationwide inoculation campaign hasn’t been set yet.

Elsewhere, a second coronavirus vaccine is expected to be approved in the United States by Friday. Moderna’s shot is likely to be approved for emergency use by the US Food and Drug Administration, after a panel of outside advisers to the agency unanimously endorsed its use.

The committee voted 20-0 with one abstention that the benefits of the vaccine outweigh its risks in people aged 18 and older, one week after the same panel backed a similar vaccine from Pfizer and German partner BioNTech SE, leading to an FDA emergency use authorisation a day later.