Straight outta favela: Brazil’s new rap rhythm makes stars of ‘gun-wielding gangsters’ from Rio’s slums who are now being targeted by police (even though their weapons and bling are fake)

First, Vitor Oliveira sold the ground floor of the bare-bones brick building he constructed near the top of his sprawling favela in Rio de Janeiro. Then he sold one of two second-floor apartments. Then his car.

It’s all for the music – for trap de cria, a new kind of hip hop that evokes gang life in Rio’s favelas.

Oliveira, 31, ploughed the proceeds into constructing a tiny recording studio and editing room in the building’s final apartment.

He returns there from his job – driving his motorcycle taxi up and down Rocinha, one of Latin America’s largest slums – to work at churning out 18 tracks and accompanying videos.

Trap de cria (rough translation: ‘homegrown trap’) is the fresh sound of this and other favelas, and remains largely unknown outside of them.

Featuring a lyrical flow over synthesised drums, it is an offshoot of Atlanta-style trap and speaks to the day-to-day struggles of hardscrabble hoods. 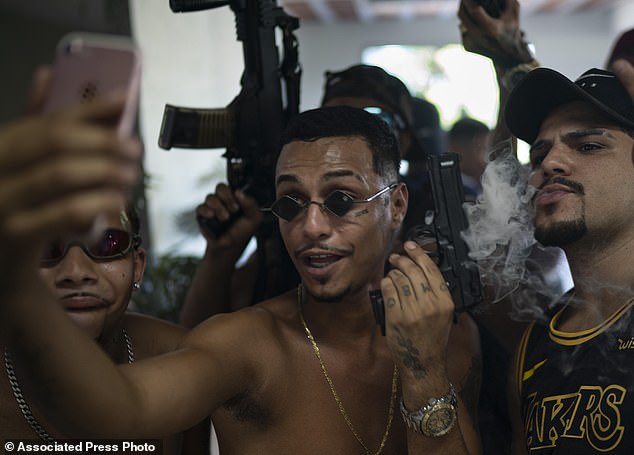 Except most of these rappers aren’t actual gangsters, though their millions of YouTube viewers wouldn’t know it from their videos that show them flaunting what appear to be real guns in working-class neighbourhoods dominated by drug traffickers.

Homegrown trap’s bravado at times appears harmless dress-up, and at others aspirational glorification of a life in crime. The artists grew up beside boys who became lookouts, runners and enforcers for gangs. Some are still friendly.

‘Our weapon is our voice, our ammunition is our lyrics,’ Filipe Toledo, who raps as Lidinho 22, said as he popped a magazine into a plastic airsoft gun. Then he aimed its muzzle at the camera. ‘Boom.’

Not everyone is a fan. Last year, Rio police launched an investigation into a video by Marcos Borges and Ivens Santos, 22-year-olds rapping under the names MbNaVoz and Dom Melodia.

Police are looking into how they obtained SUVs and whether real guns were used. The clip has been viewed 4 million times.

Brazil’s civil police said that Borges and Santos face accusations of inciting crime and association with drug trafficking, and could be indicted for illegally carrying firearms if it’s confirmed they were real. 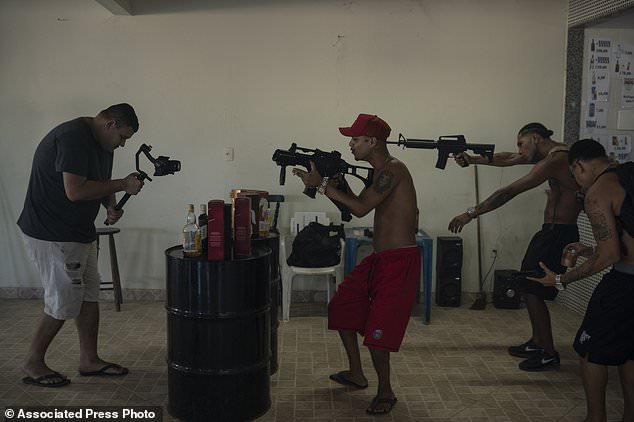 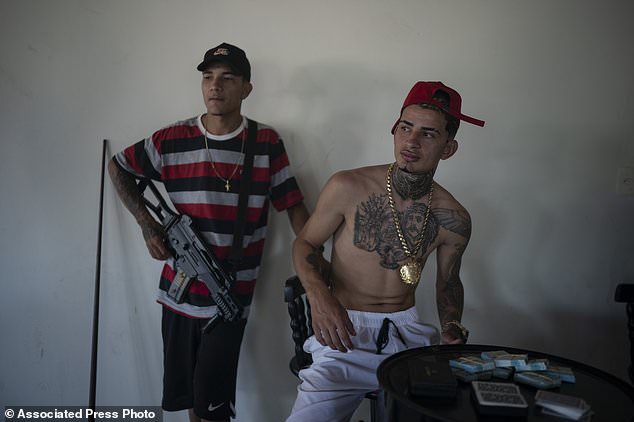 Denilson, known as ‘TB’ holds an Airsoft gun a he stands behind Wesley Souza ‘MC Branquinho’ during the recording of a Trap de Cria music video in Sao Gonçalo, Rio de Janeiro, April 11, 2021. According to Vinicius Moraes, who is doing his doctoral research in social anthropology at the Federal University of Rio de Janeiro, Trap de Cria, also known as Homegrown Trap or Real Trap, has begun gaining traction beyond the favelas among the middle class 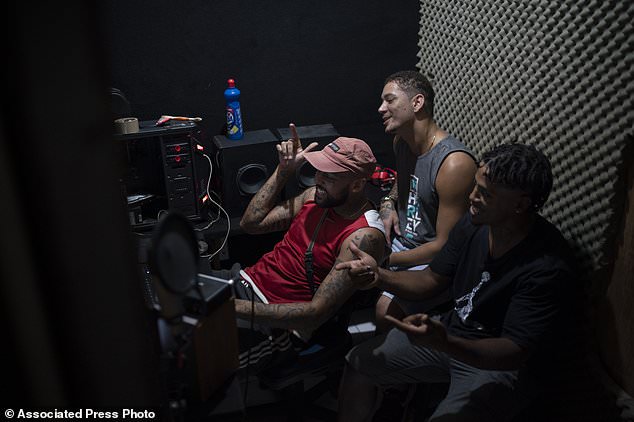 Oliveira (pictured right) has plowed all of his resources into transforming a tiny apartment into a recording studio and editing room, to which he returns to each night after driving his motorcycle taxi up and down one of Latin America’s largest slums 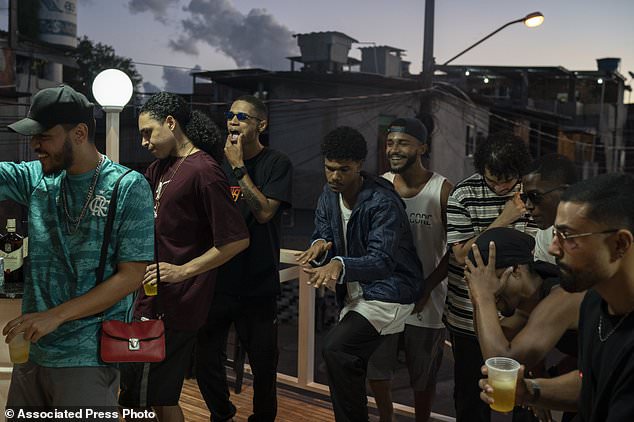 The group of artists and friends perform during the recording of a music video in the Parada de Lucas slum of Rio de Janeiro, Brazil, Sunday, April 4, 2021. Trap de Cria has a lyrical flow over synthesised drums, and is comparable to U.S. gangsta rap in speaking to the day-to-day struggles of hardscrabble hoods while depicting gang life

‘Freedom of expression has a limit, and the limit is when a crime is committed. We understand a crime was committed,’ police detective Allan Duarte told television channel SBT.

‘We cannot let children idolise these people who carry guns and practice crimes.’

Borges looks the menacing part: He has an Uzi tattooed on his neck. But he dismisses official criticism.

‘We have to portray what we live,’ he said in an interview, as he smoked marijuana.

‘We can´t sing about a woman walking Copacabana’s sidewalk or skateboarding if we didn’t live that. I go out of my house and see crazy stuff all the time. You got me? That’s how it is in the favela.’

Borges said they organised the shoot the same day as an illegal street race, and participants loaned them cars. He said they used airsoft guns, and doing otherwise would be idiotic. 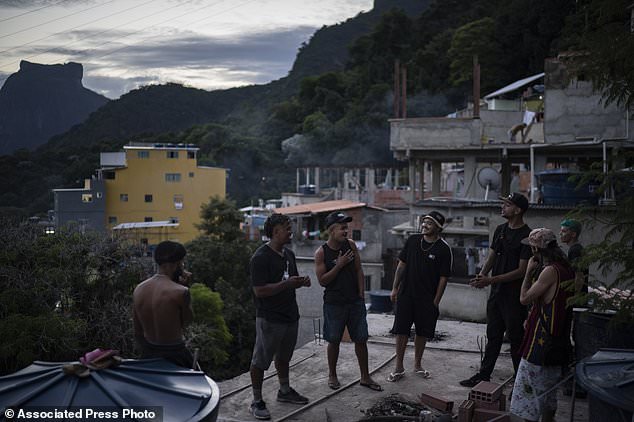 Trap de Cria artist Vitor Oliveira, known as ‘MC Piloto,’ second left, gathers on the rooftop of his home and recording studio with friends and other rappers in the Rocinha slum of Rio de Janeiro, Brazil, Thursday, March 18, 2021. Oliveira is churning out a new type of music, Trap de Cria, which roughly translates into Homegrown Trap, and planning a blitz of 18 original tracks, all accompanied by videos. (AP Photo/Felipe Dana) 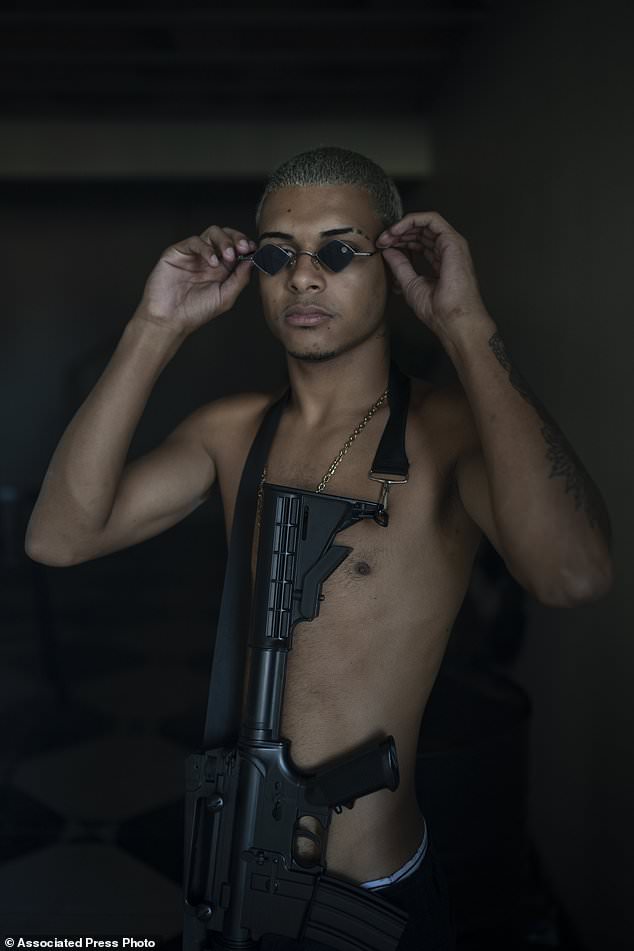 Trap artist Filipe Toledo, known as ‘Lindinho 22,’ poses for a photo with an Airsoft gun during the recording of a ‘Trap de Cria’ music video in Rio de Janeiro state, April 11, 2021. ‘Our weapon is our voice, our ammunition is our lyrics,’ Toledo said 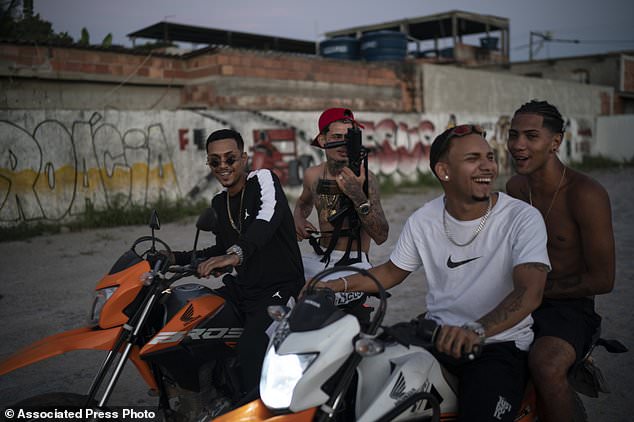 The Associated Press checked out guns used for music videos while reporting in six favelas over eight days, and all were airsofts, including the rifles Borges and Santos brandished for an April 11 shoot.

It also featured wads of fake bills; together, the two make the equivalent of one minimum-wage income from YouTube.

They even changed the location of a shoot from a barbecue where they had planned to film, because they couldn’t afford to feed the traffickers who gathered there.

Gangs control many favelas that are home to 1.7 million people in Rio’s metro region, according to the 2010 census. Services are limited, as are chances of making it out of the favela.

‘No one wants to hear kids are dying, young people are dying, that they didn’t give us opportunities,’ said Thaina Denicia, 23, a former stripper who raps as Thai Flow.

Denicia doesn´t feature guns in her videos, nor judge those who do; her father was a trafficker and she grew up with crime inside her home. 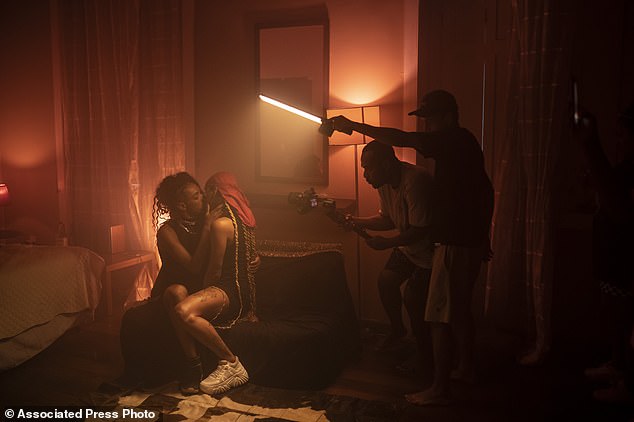 Director Diego Esteves and cameraman Wellington Maga work on the music video Deep Web, March 30, 2021. Esteves, who has directed dozens of Homegrown Trap’s music videos and other clips, argues that the blowback Homegrown Trap has started receiving is notable precisely because the sub-genre remains mostly underground 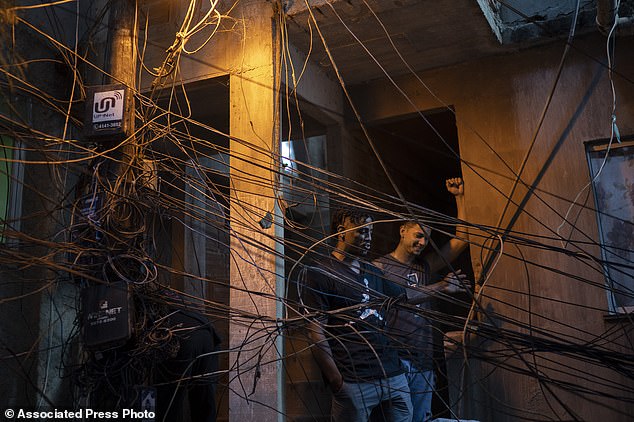 Trap de Cria artist Vitor Oliveira, known as ‘MC Piloto,’ stands at the entrance of his home and recording studio with Brendon Kelvin, in the Rocinha slum of Rio de Janeiro, March 18, 2021. Not 100 feet from his studio, cocaine and marijuana are sold by young men ambling about with semi-automatics 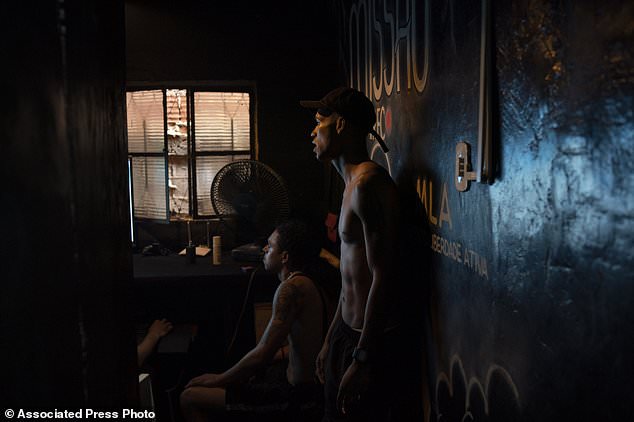 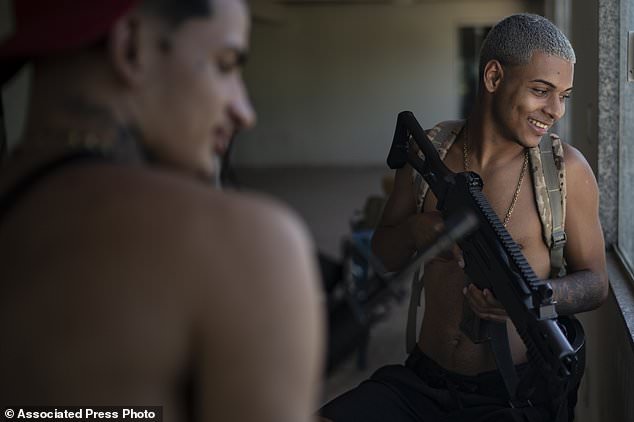 Artist Filipe Toledo, known as ‘Lindinho 22,’ holds an Airsoft gun before the recording of a Trap de Cria music video in the Jardim Catarina community in Sao Gonçalo, April 11, 2021. Last year, Rio’s police launched an investigation into a video made by two rappers from Sao Gonçalo, a city in Rio’s metro region, to determine how they obtained SUVs and whether real guns were used. The clip has been viewed 4 million times 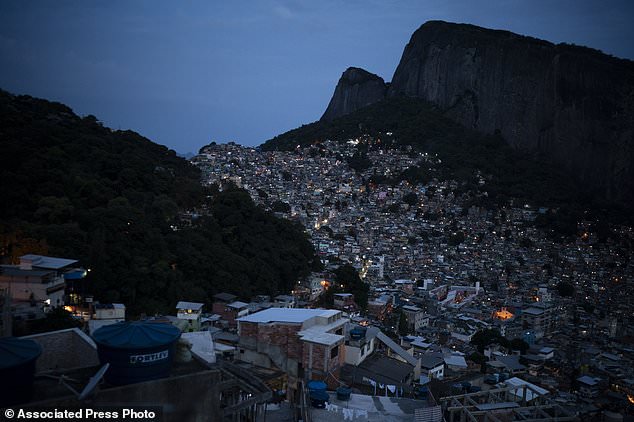 Homes are illuminated at dusk in the Rocinha slum of Rio de Janeiro, Brazil, Thursday, March 18, 2021. Gangs control many of Rio’s hundreds of favelas like Rocinha that are home to 1.7 million people, or about 14% of the metropolitan region’s population, according to the 2010 census. Services are usually precarious and chances for social advancement limited

She wants to resonate in her cluster of favelas, Complexo do Alemao, and provide a window for outsiders who don´t know the first thing about their lives.

‘I talk about the characters crime created, society created, and where we can go and who we can be,’ she added.

‘Is this the culture you want for your children?’ he asked on Instagram.

This isn’t the first music born of Rio’s majority Black and biracial communities to stir consternation. A century ago, police arrested samba musicians for as little as playing pandeiro, a hand drum.

In the 1990s, funk and hip-hop musicians had their turn. 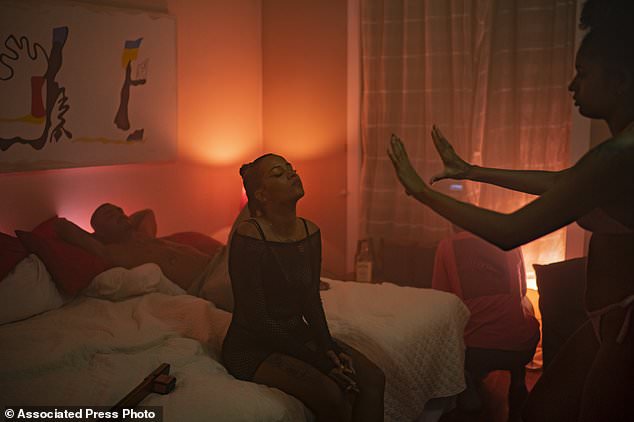 Producer Cassiandra Azevedo, right, directs Trap de Cria artist Thaina Denicia Silva, known as ‘Thai Flow’ during the recording of her music video Deep Web, at a hotel in Rio de Janeiro, March 30, 2021. ‘No one wants to hear kids are dying, young people are dying, that they didn’t give us opportunities,’ said the 23-year-old Silva, a former stripper. ‘We don’t want to talk about it, but we don’t have any other option.’ 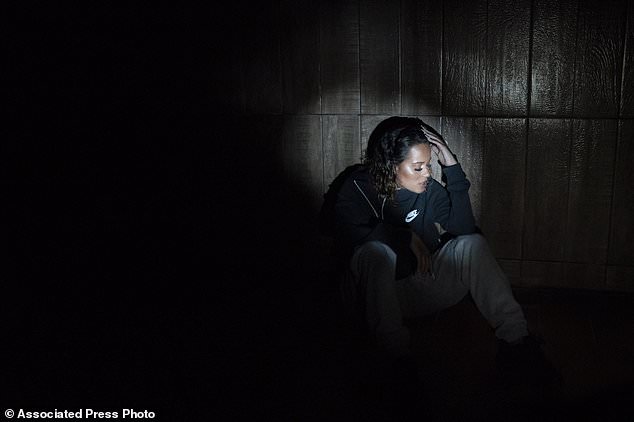 Trap de Cria artist Thaina Denicia, known as ‘Thai Flow,’ performs during the recording of her music video Deep Web in Rio de Janeiro, Brazil, Tuesday, March 30, 2021. Silva doesn’t feature guns in her videos, nor judge those who do; her father was a trafficker and she grew up with crime inside her home 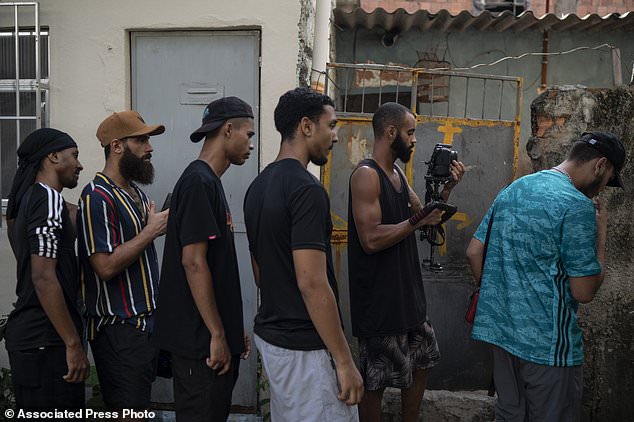 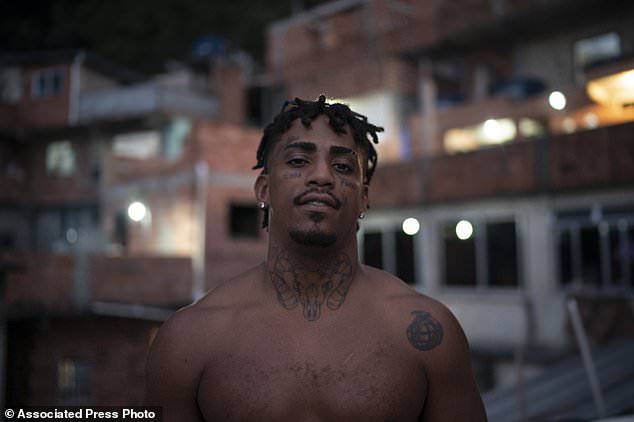 Vitor Oliveira, known as ‘MC Piloto’ (pictured April 12, 2021) has recorded 10 tracks and two videos for his 18-song project. From his elevated perch, music can sometimes seem a distant dream, but he visualises himself dodging all pitfalls. ‘But I’m prepared to take off,’ he says

Lacking the means to record videos, musicians entertained at massive ‘funk dances’ in the favelas, said Janaina Medeiros, a journalist who authored the book ‘Rio Funk: Crime or Culture?’ As CDs of ‘prohibited funk’ referencing gangs became popular, authorities cracked down on the dances.

‘The whole movement was seen as an evil incarnation, like a big virus that was going to contaminate society, glamorise crime and kidnap good girls from their families,’ Medeiros said.

Funk was the soundtrack of Vitor Oliveira’s adolescence, and he started making his own music. With homegrown trap, he discovered a genre more open to self-expression, and was hooked.

Not 100 feet from his studio, cocaine and marijuana are sold by young men ambling about with semi-automatics. Oliveira says he ran occasional errands for the gang, but only when desperate for cash.

There’s evidently good will. Before he shot a video on March 6, traffickers removed rings from their fingers and pulled heavy gold chains from their necks for Oliveira’s use.

Under the name MC Piloto, he has recorded 10 tracks and two videos for his 18-song project. Success can sometimes seem a distant dream, but he envisions himself dodging all pitfalls.

‘You think (the state) isn’t going to worry seeing a Black man doing well in this life? Damn. It’s going to try to trip me up,’ he said. ‘But I´m prepared to jump off.’