Home » World News » Britain has one eye on trade with China, the other on its threats

London: Britain will seek more trade and direct investment from Beijing, despite a major review of its foreign and defence policy describing China as the “biggest state-based threat to the UK’s economic security.”

It will also seek a “transformation” of its relationship with India over the next decade, as part of a major tilt towards the Indo-Pacific region. 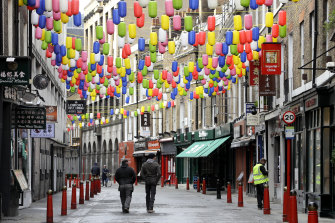 People walk through a quiet Chinatown in London. A review of the British government’s foreign policy advocates for more Chinese investment in the UK.Credit:AP

Prime Minister Boris Johnson is due to release the long-awaited Integrated Review of Security, Defence, Development and Foreign Policy on Tuesday evening AEDT.

The strategy is touted as the biggest overhaul of Britain’s outward policies since the Cold War. It was due for release late last year but was delayed by the COVID-19 pandemic.

According to a copy obtained by The Sydney Morning Herald and The Age Britain will increase its “enhanced China-facing capabilities” to better understand the country and its people, while improving its ability “to respond to the systemic challenge that it poses to our security, prosperity and values – and those of our allies and partners”.

“China and the UK both benefit from bilateral trade and investment, but China also presents the biggest state-based threat to the UK’s economic security,” the review said. 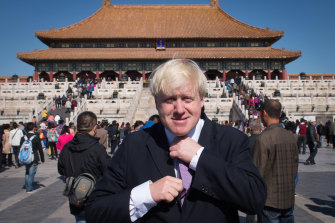 British PM Boris Johnson on a trip to Beijing as London mayor in 2013.Credit:Getty Images

This would offer the UK “increasing opportunities for trade in higher value-added goods and services,” with the region already accounting for 17.5 per cent of Britain’s trade and 10 per cent of foreign investment.

But the review acknowledged that China’s “military modernisation and growing international assertiveness within the Indo-Pacific region and beyond will pose an increasing risk to UK interests.”

It envisioned working more closely with ASEAN through the Pacific Island Forum, Progressive Agreement for Trans-Pacific Partnership, as well as its key ally, the United States, and the Five Eyes intelligence-sharing countries which includes Australia, to achieve its goal.

India’s Prime Minister Narendra Modi has adopted a more muscular approach in joining allies to help counter the threat posed by China. This was demonstrated most recently at the weekend when leaders of the Quad — an informal bloc comprising India, the US, Australia and Japan — met and pledged to deliver vaccines to the region.

Johnson was due to visit India earlier this year but delayed his trip until late April because of the pandemic.

Later this year, Britain’s new aircraft carrier HMS Queen Elizabeth will tour the Indo-Pacific in a show of force and solidarity over freedom of navigation, which China has challenged in the South China Sea.

The report also described Russia as “the most acute threat in the Euro-Atlantic region” and set out new ways to tackle money laundering through the City of London, foreign ownership of property and foreign meddling in democracies and elections.

Britain will introduce a register for UK properties owned by overseas interests and will copy Australia’s foreign interference legislation by establishing a register for foreign agents on UK soil.

This is expected to lay bare the full extent of Russian, Chinese and Middle Eastern ownership of London trophy properties.

The government will take a more interventionist approach to blocking foreign investment where it believes it could compromise national security and beef up the organisation that investigates financial crime — the National Economic Crime Centre.

It will also introduce a second global sanctions regime on corruption, similar to schemes already operating in the US and Canada, eventually allowing the trio of allies to declare coordinated sanctions.

The review predicted that serious and organised crime would likely launder tens of billions of pounds through the UK every year because criminals were better at adapting to new technologies than governments.

The Inter-Parliamentary Alliance on China, comprising cross-party legislators from 20 legislatures from around the world said the government’s China policy remained confused.

“The Integrated Review set out many of the steps the UK will need to tackle the challenge posed by China but — regrettably — it also highlights the contradictions, inconsistencies and dual-standards at the heart of our overall strategy,” the alliance said.

“Suggestions made for deeper trade links and increased Chinese investment in the UK would seem to directly undermine attempts to meet these challenges.

“The government must develop a full and coherent China strategy which takes into account the threats posed to the UK’s national interests by the Chinese government, and must act urgently to ensure that no state is allowed to violate international law and human rights with impunity,” the alliance said in a statement.