Bopper is no longer a Whopper! Britain’s fattest dog who was once too big for a kennel finally finds a home after losing three stone

A border collie nicknamed ‘Bopper the Whopper’ who was once ‘too fat for his kennel’ has shed more than three stone and found his forever home.

The sheepdog tipped the scales at a staggering eight stone (50kg) when he  he waddled into Gables Farm Dogs and Cats Home in Plymouth in November last year.

The chunky canine has since slimmed to five stone (32kg) and has been rehomed by local couple Mike and Jan. 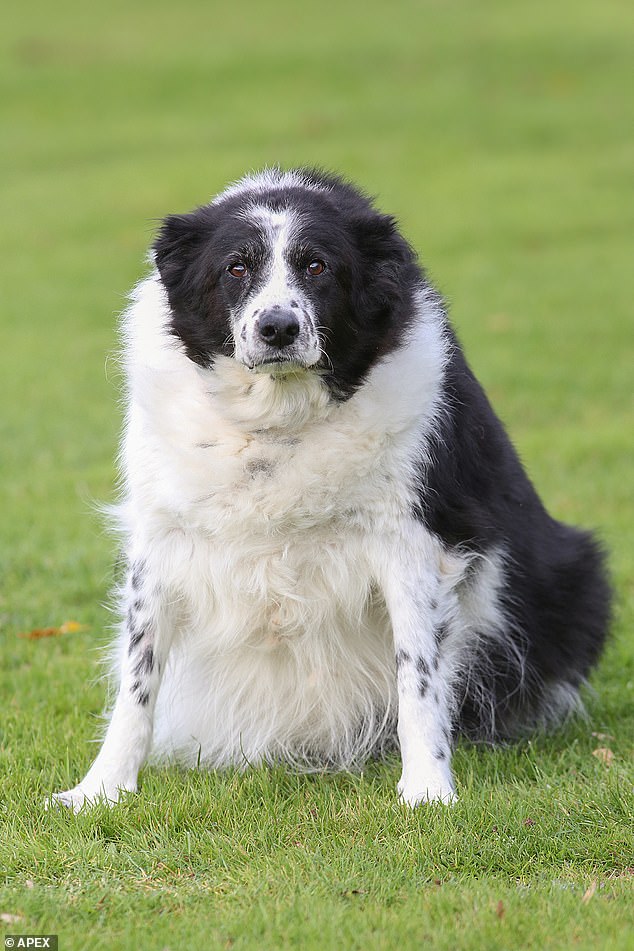 The shelter’s deputy manager Ruth Rickard approached the pair as they had already rehomed five older dogs, including Labradors Honey and Sadie, from the shelter.

Mike said: ‘He is a very friendly dog – he is very outgoing and gets on so well with the girls. We’re delighted with him.’

A statement from the shelter said: ‘He has settled in very well and is enjoying plenty of short walks on the moors to help him shed the last of his weight and everyone is thrilled for him.’

The shelter has earned a reputation for helping hefty hounds shed the pounds. 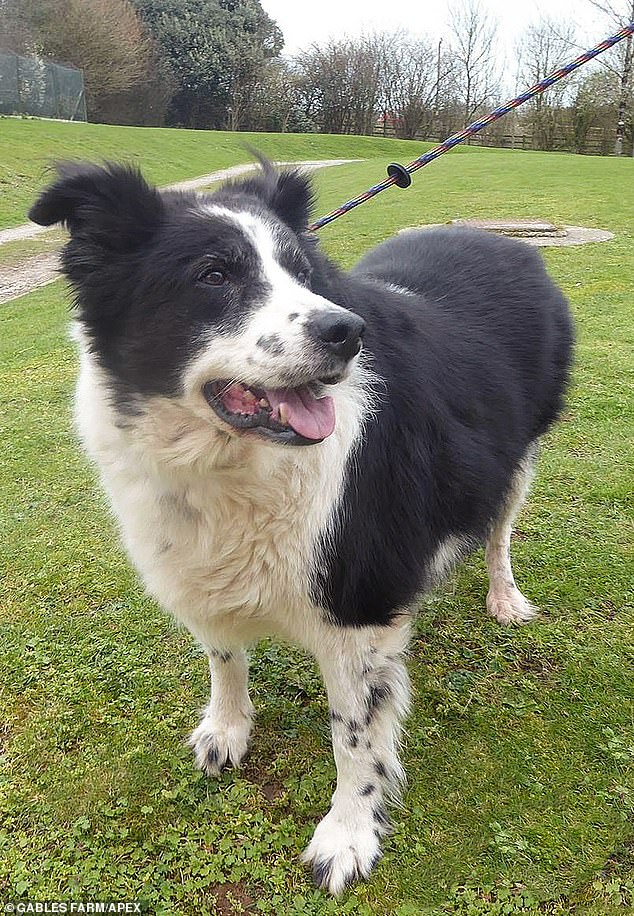 The sheepdog tipped the scales at a staggering eight stone (50kg) when he he waddled into Gables Farm Dogs and Cats Home in Plymouth in November last year. The chunky canine has since slimmed to five stone (32kg) and has been rehomed by local couple Mike and Jan (pictured now)

Bopper was about 22Ilbs heavier than the shelter’s other hefty hound, ‘Hattie the Fatty’, who also made headlines for her huge frame.

Hattie has since been rehomed by Mrs Rickard after shedding half her body weight.

In April, the shelter took in its biggest dog yet – 11st Georgie Porgie. 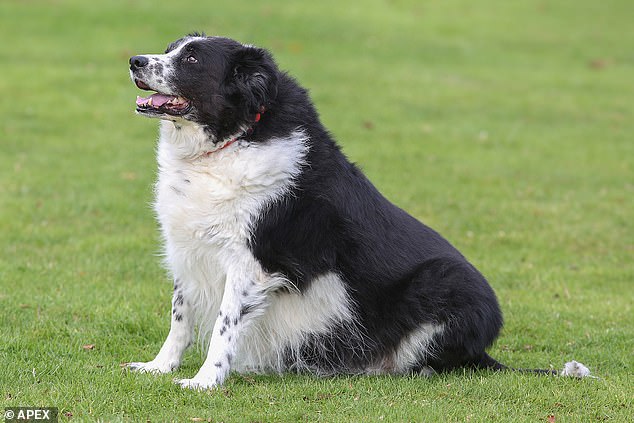 Bopper (pictured before weight loss)  was about 22Ilbs heavier than the shelter’s other hefty hound, ‘Hattie the Fatty’, who also made headlines for her huge frame 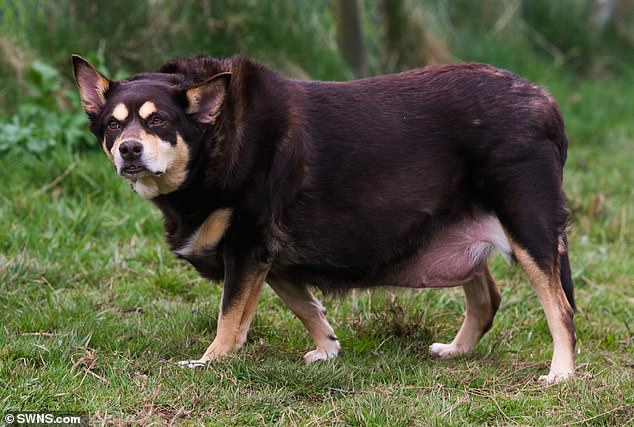 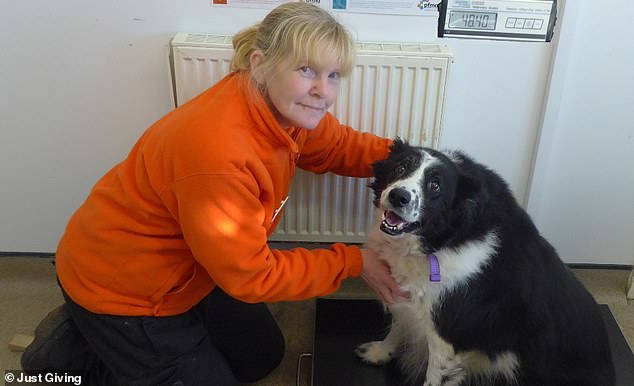 Bopper, who has trouble walking and risks developing diabetes and cataracts, was being looked after by the animal shelter’s manager because he was too big for their kennels.

Manager Ruth Rickard said: ‘When we agreed to help the RSPCA and they said there’s an obese collie I thought nothing could be as fat as Hattie was. 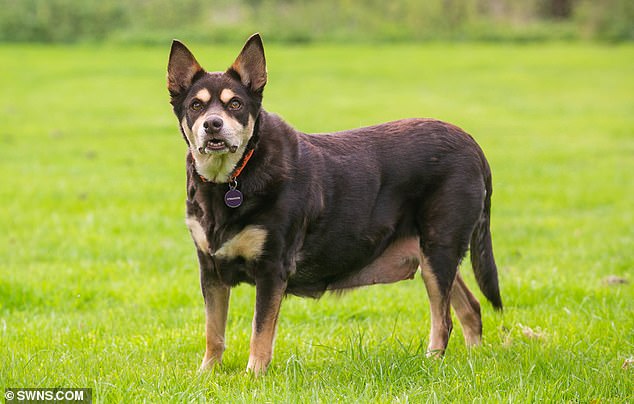 After: Hattie the Fattie is pictured at a much slimmer weight after being put on a diet 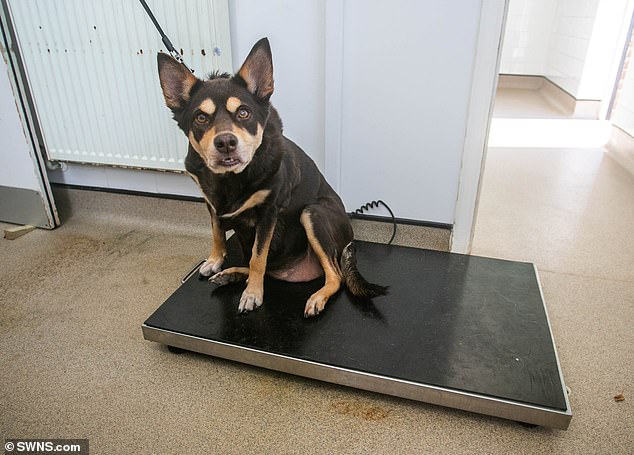 ‘We thought Hattie was the fattest dog we’d ever get here – but Bopper makes her look tiny!

‘With him being so big he struggles to get up. He’s on pain relief to help his joints.

‘We need to get him to lose weight slowly and safely. And increase his exercise a little bit each week. He needs to lose four stone – it’s shocking.’

Staff claimed Bopper was twice the size he should be and was be put on a strict diet and exercise regime, which saw Hattie slim down from a hefty 6.5 stone. 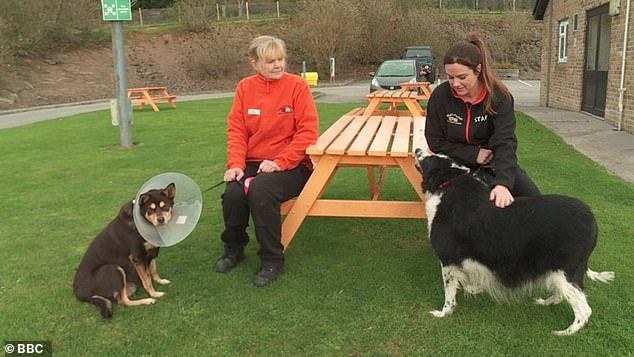 Ms Rickard explained: ‘We don’t know how he got so big. His owner from Torquay became very ill and we were asked to take care of him and we’re a charity that cares so we did.

‘But people do love their animals and they keep feeding them treats and the wrong foods.

‘That’s the only thing that can be happening. Too much food and not enough exercise and this is the result. 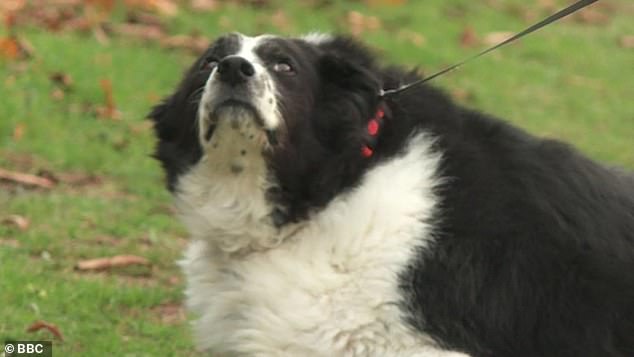 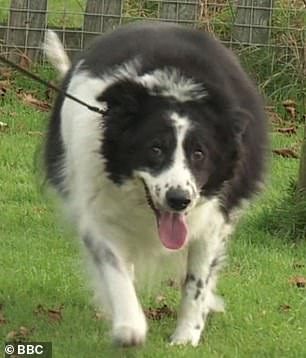 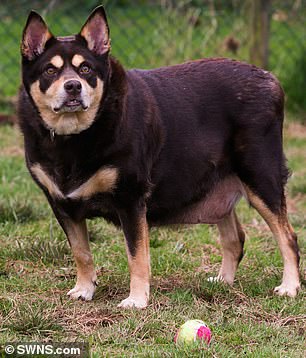 Collie Bopper the Whopper (pictured left) took the title of Britain’s fattest dog from Hattie the Fattie (pictured right before weight loss). They are both looked after by staff at the Gables Farm Dogs and Cats home in Plymouth. They have both now slimmed down to a healthy size 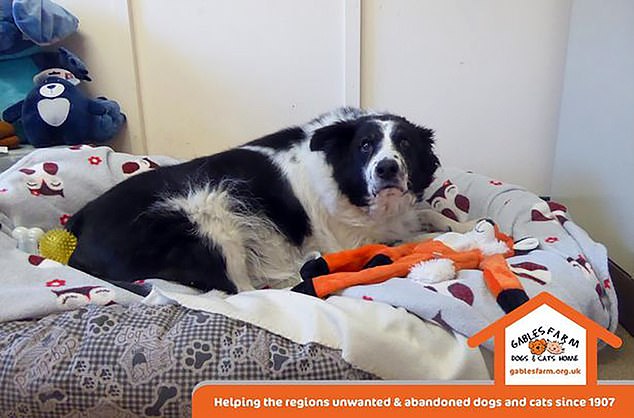 Bopper the Whopper: The 11-year-old Collie was too big for a kennel at Gables Farm in Plymouth so has to be looked after by the manager instead

‘Hattie the Fattie was miserable when she first came in and she’s a delight now.

‘Losing between half a kilo and a kilo a week is a safe way to do it.

‘When Bopper first arrived we put him in a kennel but he’s so big he looked uncomfortable and didn’t have space to move around. He was going to be miserable.

‘But I live on site and have a spare room I took him home and gave him a couple of big beds and he has more space to move.