Heatwave starts here! Britons are set to pack out beaches and parks today as temperatures hit 23C and will get even hotter next week with mercury edging towards 26C – making it warmer than Mexico

Britons are set for a relaxing day in the sun as people flock to the UK’s beaches and parks to take advantage of warmer temperatures that could reach highs of a whopping 23C (73.4F) today.

Last week saw highs of 22C (71.6F) but the next seven days could bring even hotter temperatures to Britain. The mercury could edge towards 26C (78.8F) the following week, which could make it warmer to be in Britain than in Mexico.

Alex Burkill, a forecaster at the Met Office, told MailOnline temperatures today would be mostly high, with the possibility for good weather this and next week, although just when higher temperatures in the mid-20s kick in is hard to predict.

He said Sunday would be ‘a decent day for many with some warm and sunny spells’. He added: ‘Temperatures of mid-20s aren’t out of the question… but there’s no guarantee.’

Britain will mostly have good and dry weather today, although the northwest may see showers in the evening. 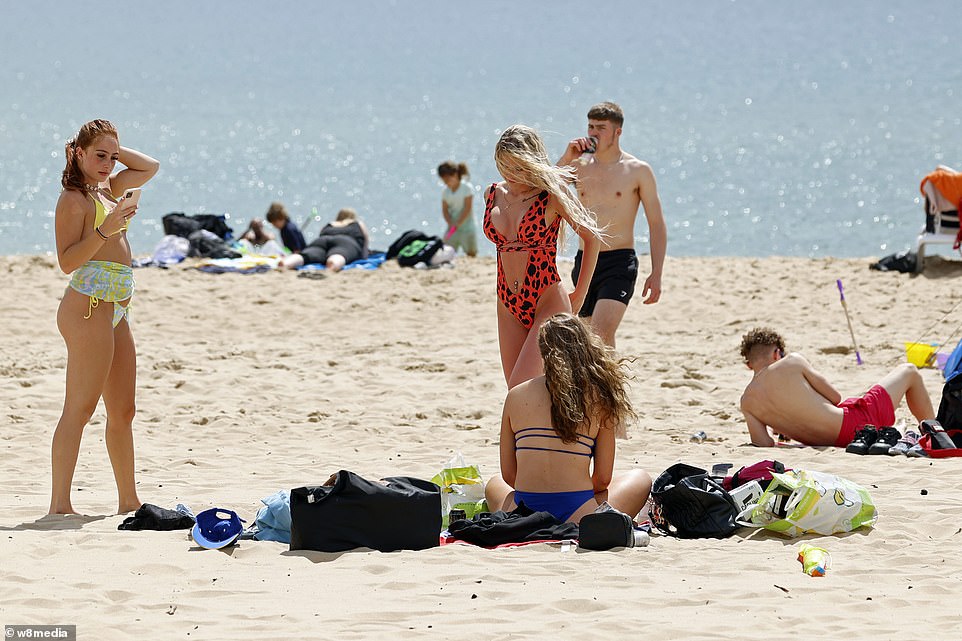 A group of girls donned their bikinis for the sunny Bournemouth Beach, which has reached highs of 21C (69.8F) on Saturday 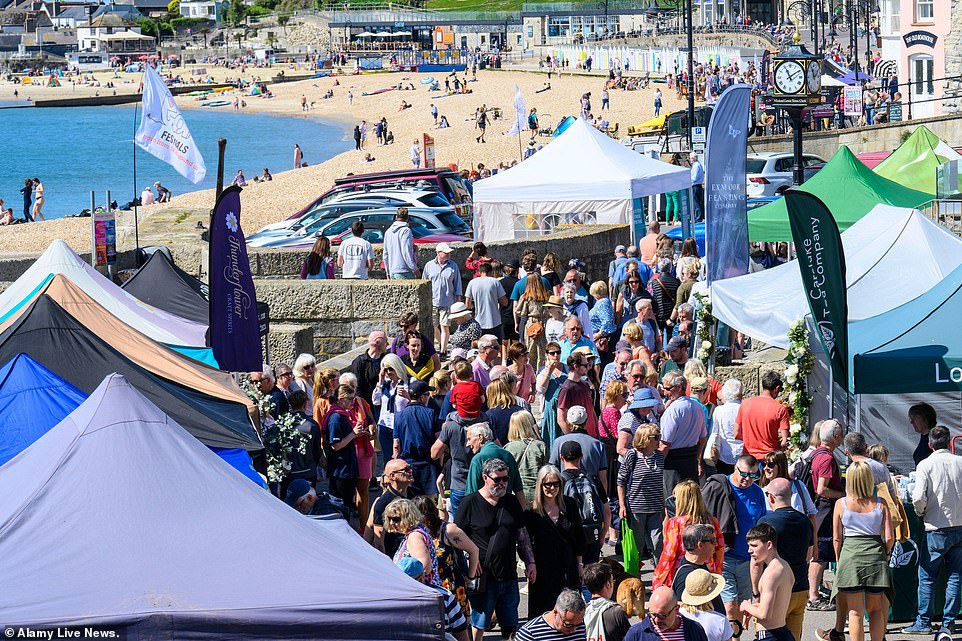 People flock to the seaside resort of Lyme Regis on Saturday to enjoy scorching hot sunshine and clear blue skies. The popular coastal town was busy with people soaking up the sunny weather on the beach and enjoying food stalls 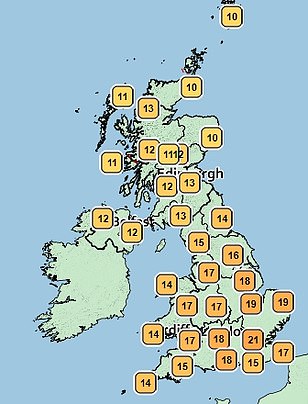 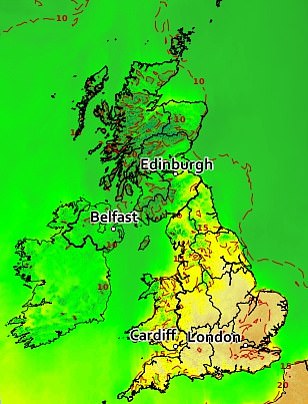 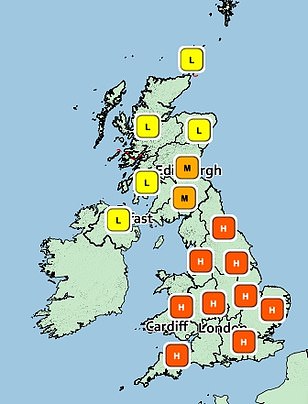 The mercury could reach as high as 23C on Sunday and rise to 21C in London on Monday (left). A temperature map showed  the highest areas of heat will be in the southeast (centre). Pollen levels (far right) are set to be high across most of the UK and the whole of England and Wales 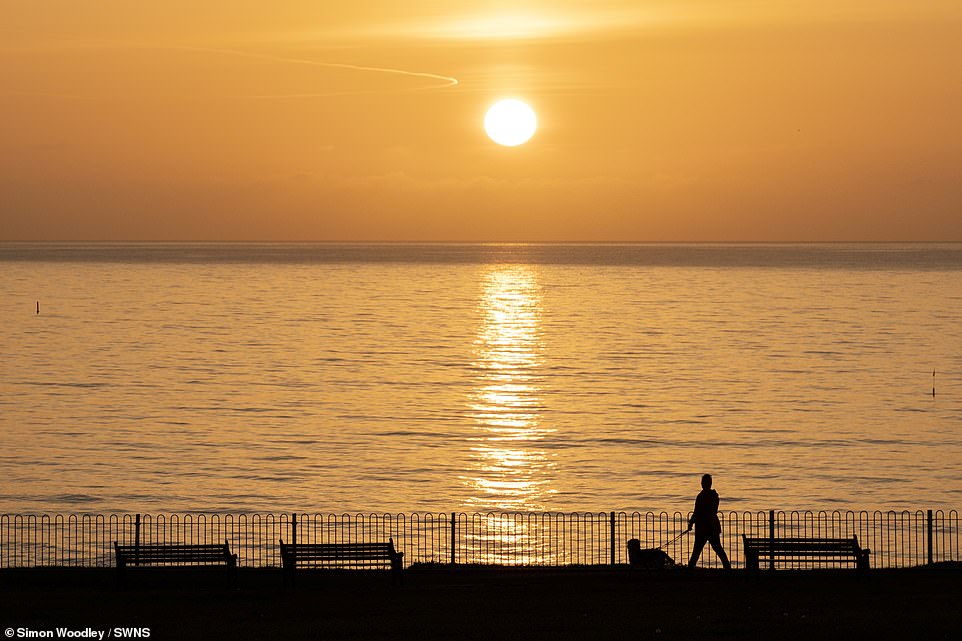 The Met Office said: ‘The sunshine has not been spread evenly across the UK this morning.

‘Things will get fairer through the day as the cloud lifts and breaks up over the next couple of hours.’

The UK pollen count is also thought to remain high today and tomorrow as summer beckons.

The Met Office urged people to remember ‘the sun’s rays can be strong enough to burn in the UK from around April to September’ and added there was a high pollen count from trees and some grass today.

Low-lying clouds and swathes of mist cleared this morning as the sun emerged to provide Brits with a glorious Sunday.

The Met Office predicts the day will become more windy and cloudy, especially in the northwest, which will see patchy rain and a brisk wind in Scotland and the west of Northern Ireland.

Evening will bring a frost in some of the southeast but it doesn’t spell the end of Britain’s mini-heatwave.

The start of the week will see sunny spells with a few clouds in most parts of England and Wales, while wind and occasional rain will affect Scotland and Northern Ireland.

The mercury could rise to 21C (69.8F) in London on Monday, which could mean the capital is warmer than popular holiday destinations including Turkey and the Costa del Sol. 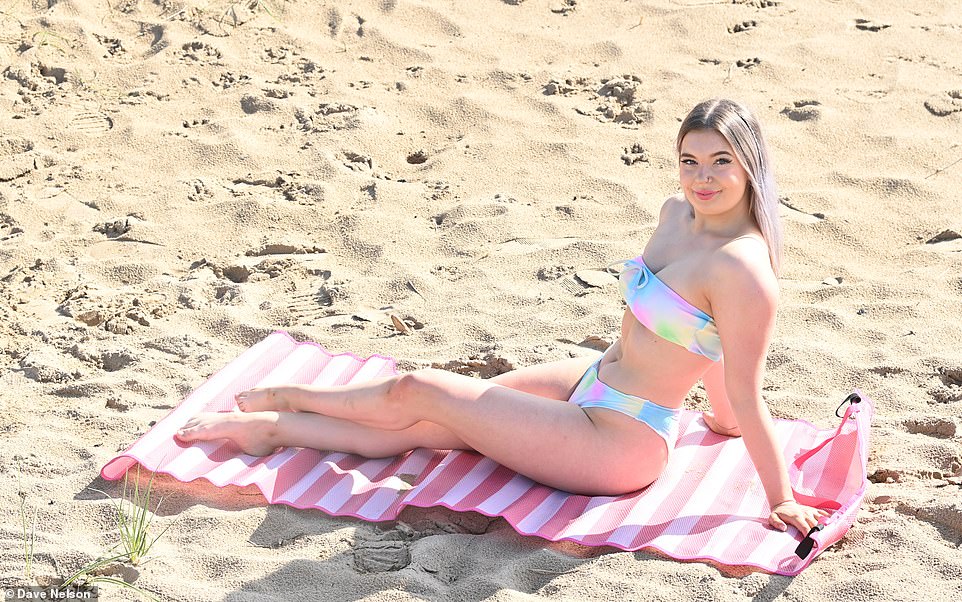 The UK will feel more like summer than spring with the mercury expected to remain in the high teens and low 20s in the south of England (Cleo Leilani Khan, 18, from Blackpool, pictured enjoying the weather on St Anne’s Beach in Lancashire on Saturday morning) 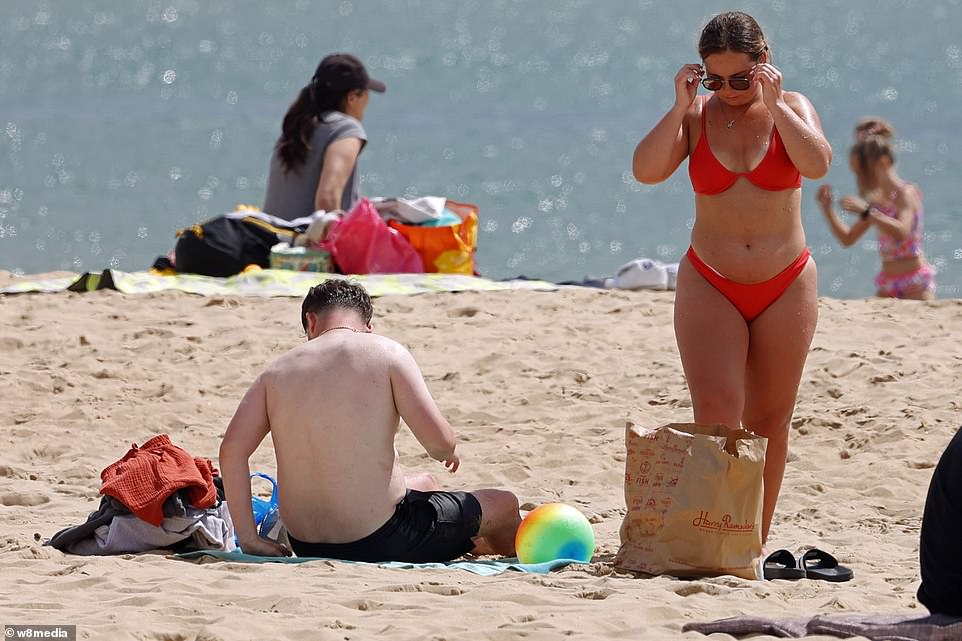 Many people took the opportunity of sunshine and 21C (69.8F) temperatures and had a beach day as pictured at Bournemouth Beach, Dorset, on Saturday afternoon 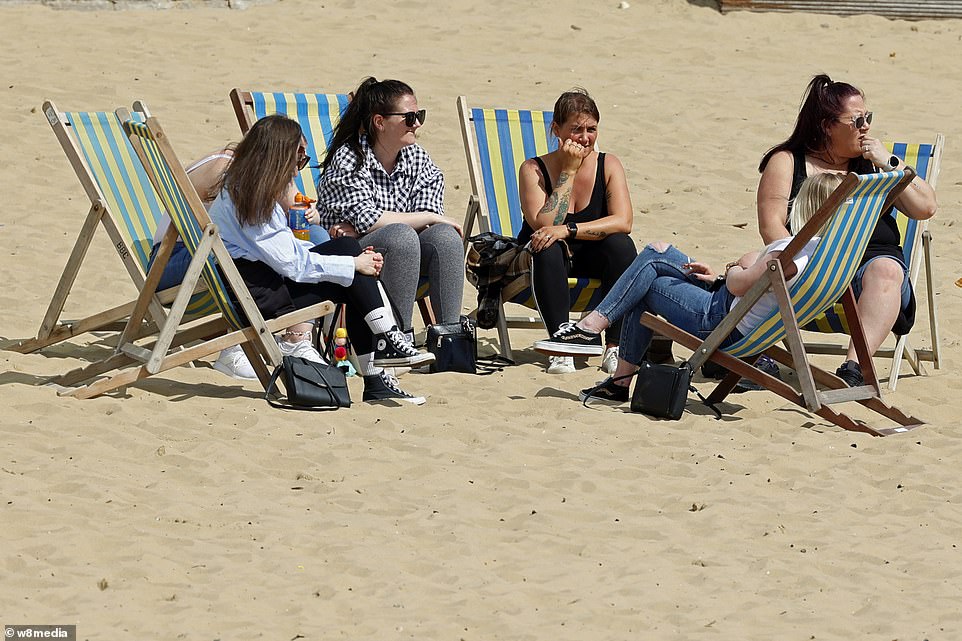 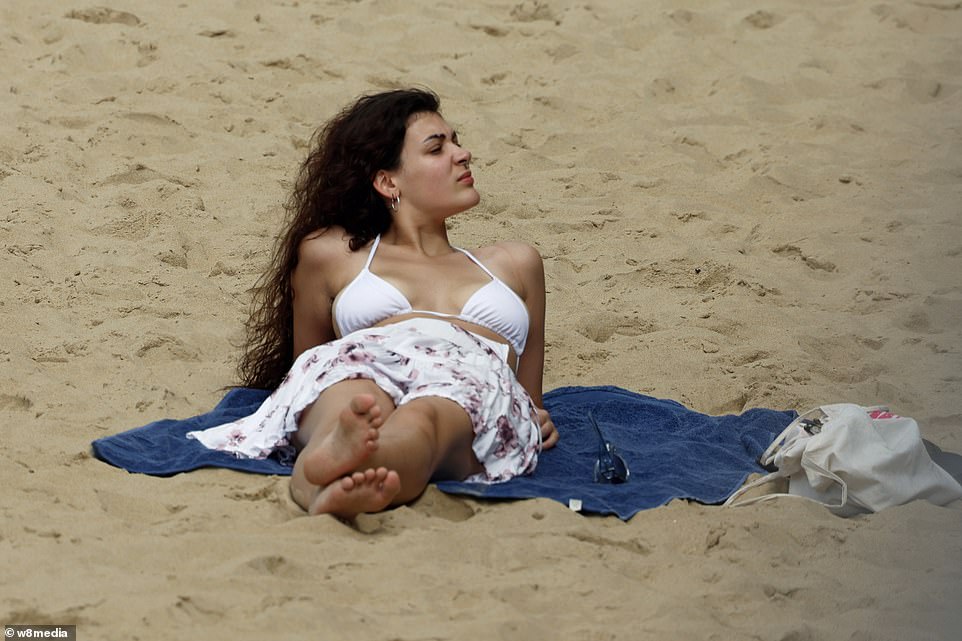 People spent the time basking in the 21C (69.8F) heat, which is only the start of a proposed hot week to come, as forecasted by the Met Office 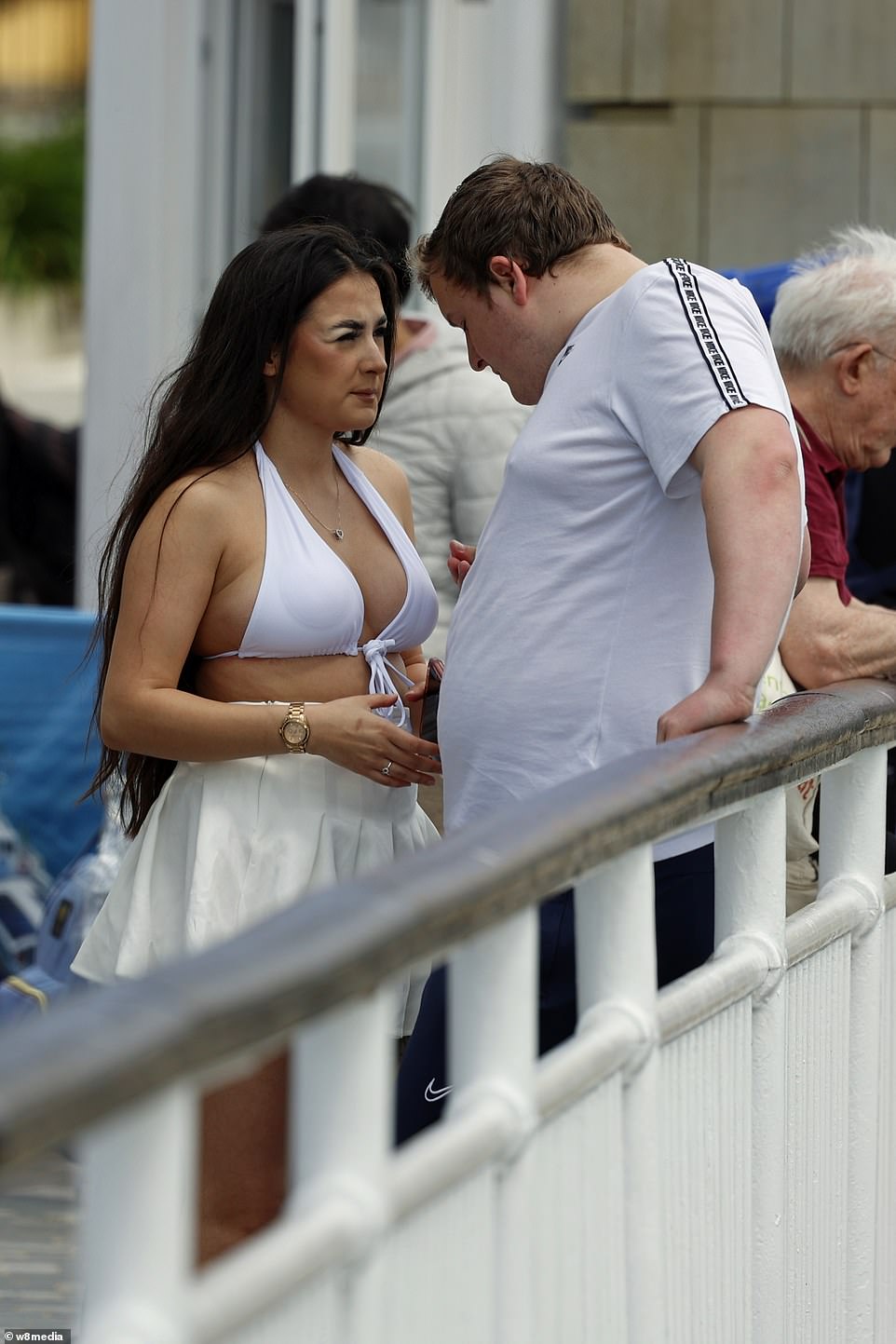 It is officially T-shirt weather in May as the country has experienced warmer temperatures, with Friday just shy of the hottest day of the year at 23.3C (79.9F) compared to today’s 21C (69.8F) in Bournemouth

That temperature could remain the high on Tuesday before smatterings of rainfall will affect the southeast in the following days.

Wednesday could see plenty of rain and wind, although with a high of 21C (69.8F) before Thursday clears up and is drier and brighter. Both Thursday and Friday are expected to have highs of 19C (66.2F).

A 1,000 mile-wide ‘tropical burst’ is due early next week. The South will be mainly dry, with the North more unsettled, but also sharing in the warmth at times.

Met Office forecaster Marco Petagna said yesterday: ‘It’s warm, above early May average temperatures of 12-17C – and there’s plenty more warmth ahead. Who fancies the mid to upper-20s around mid-May?’ 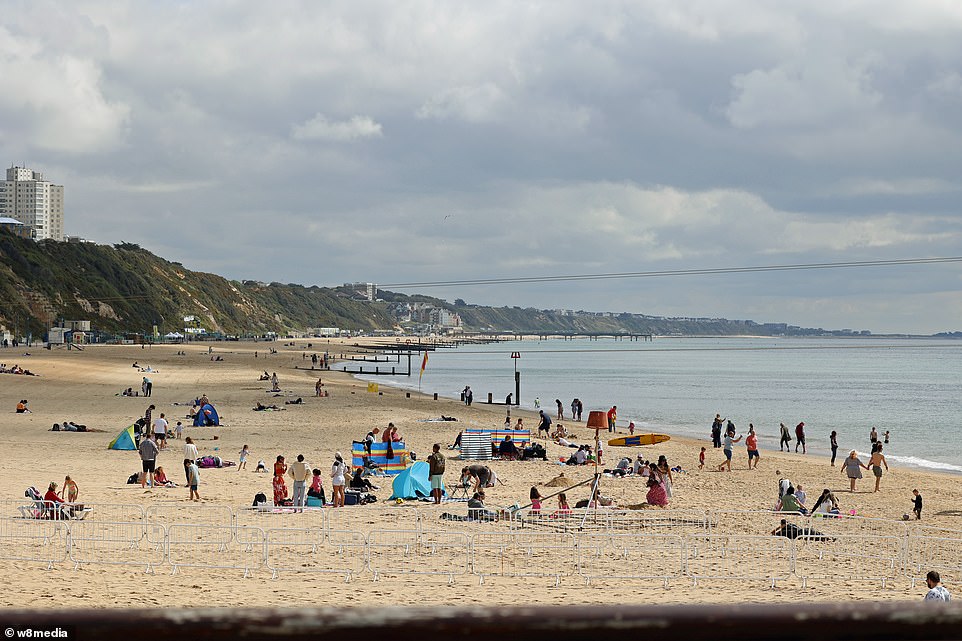 Although slightly cloudy at times, the warm weather didn’t stop sun worshippers from flocking to Bournemouth Beach, pictured on Saturday afternoon, which reached highs of 21C (69.F) this afternoon 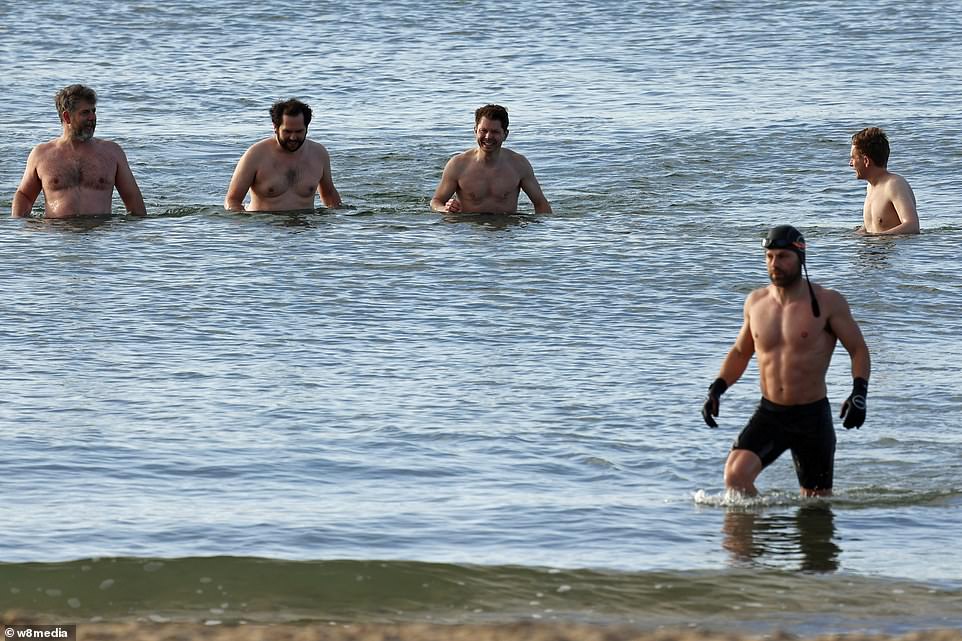 Britain is set to bask in 22C (71.6F) rays this sunny May weekend, with sun worshippers being warned of the need for sun cream after the 23.3C (73.9F) temperatures Britain saw on Friday (People pictured enjoying Branksome Beach in Bournemouth early Saturday morning) 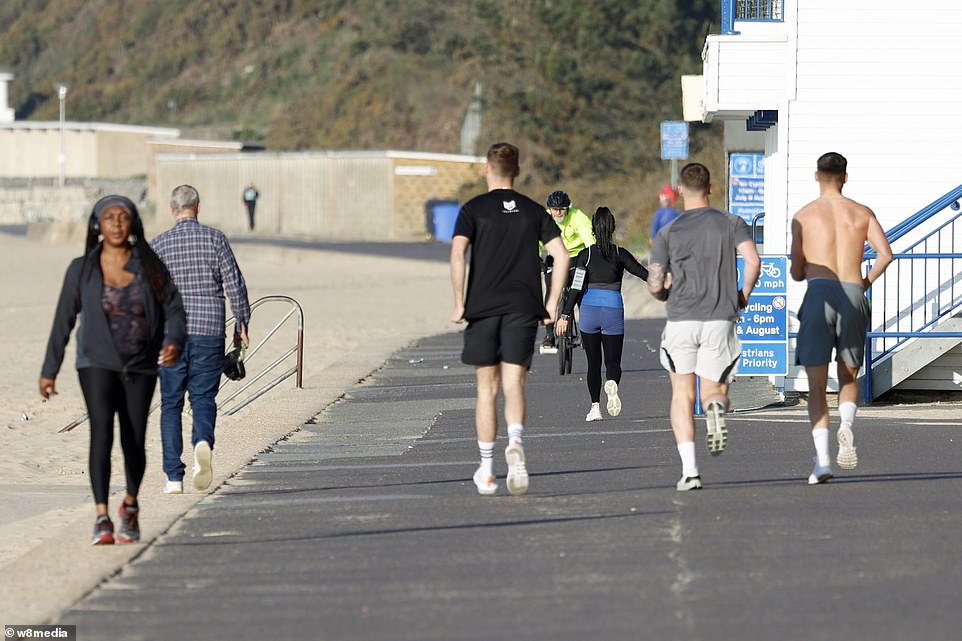 Many at Branksome Beach were up early this morning for a spot of exercise in the sunshine and warm temperatures, with 22C (71.6F) rays expected this weekend 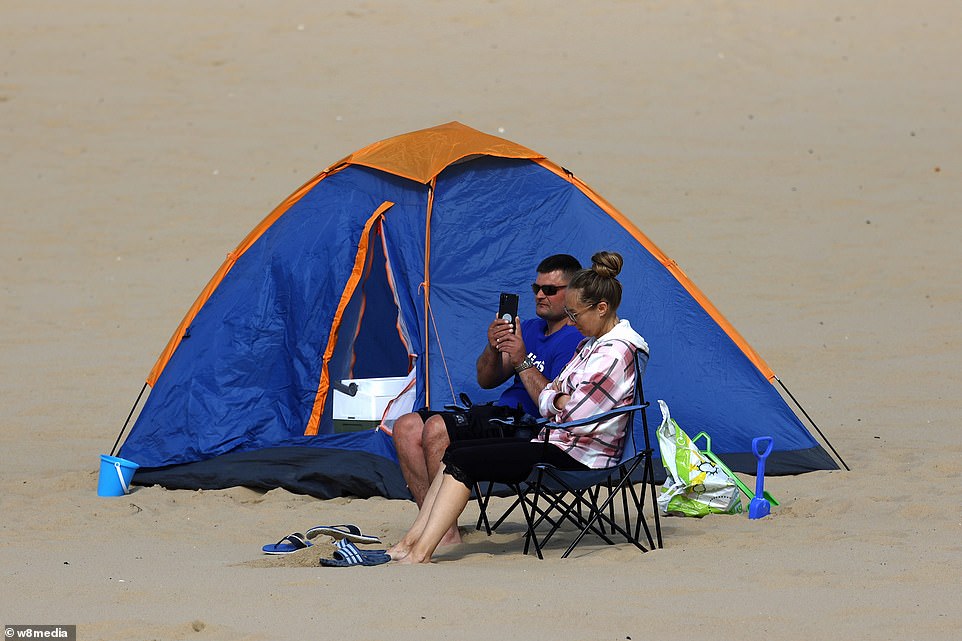 Saturday is likely exceed 20C in the south and 17C in the north. London and the southeast will see a few spots of drizzle but the western half of the country will be dry with lots of sunshine (Pair pictured on Bournemouth Beach in Dorset enjoying the warmer temperatures) 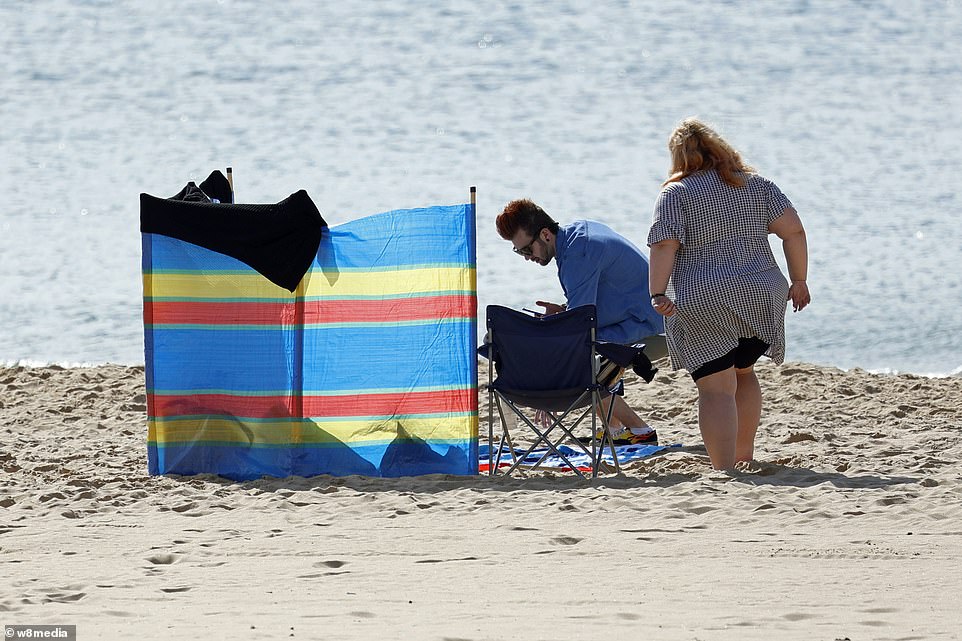 A 1,000 mile-wide ‘tropical burst’ is due early next week. The South will be mainly dry, with the North more unsettled, but also sharing in the warmth at times. People pictured on Bournemouth Beach, Dorset 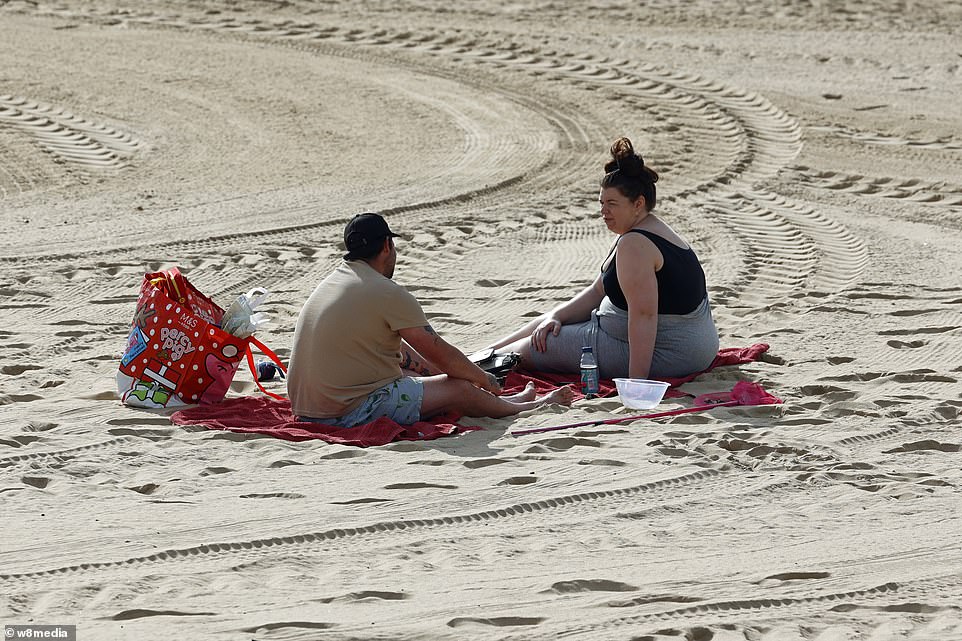 The weather cocktail of warmth, little rain and relatively light breezes have made it a perfect spring – and now the looming heatwave will make it a hay fever corker (Pair pictured on Bournemouth Beach, Dorset on Saturday morning)

A Met Office forecaster added: ‘It’s possible later next week will have well-above-average temperatures. Even warmer weather is on the way.’

Next week will start more unsettled in northern and western areas – but a mini heatwave could move in next weekend.

But the Met Office said the current high temperatures have been ‘particularly surprising’ as it is so early in the month.

This is thanks to a high-pressure system brought on by south westerly winds from the Azores.