EXCLUSIVE: Brothers aged 1 and 3 suffer severe burns to their faces at family bonfire night after an aerosol can accidentally thrown into the flames exploded

Two young brothers suffered extensive burns to their face, hands and upper chest after a horrific accident saw an aerosol can explode on a bonfire.

Carli Mathiesen, the aunt of the two young boys, Xander, 3, and Tanner, 1, said June 3, started out like a regular Friday night with the boys playing around a bonfire on their property in Lansfield, in regional Victoria.

She said the family were big on fire safety and the children were always well behaved and knew what precautions to take – but that didn’t stop a horrible accident. 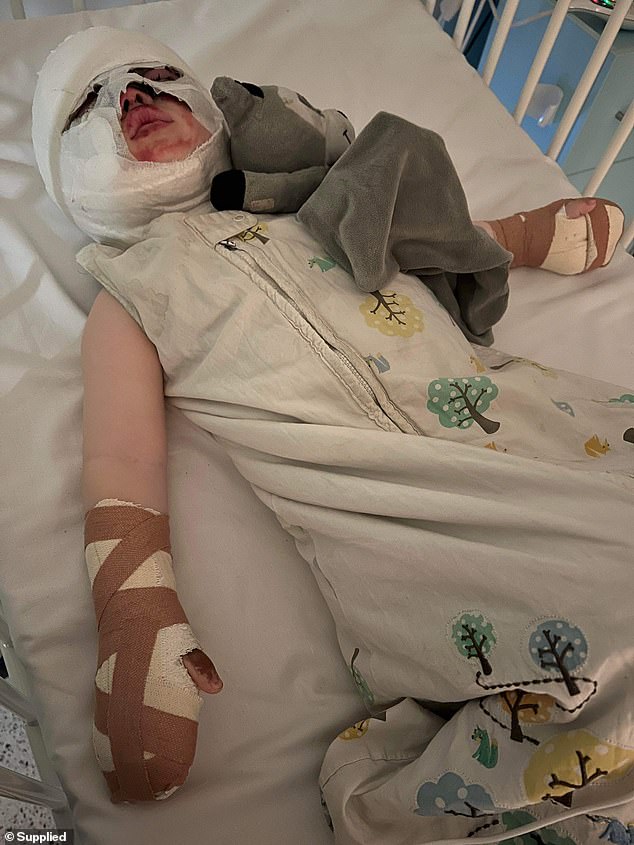 Xander, 3 (pictured) who suffered extensive burns to his hands, face and upper body after an aerosol can exploded pictured in ICU post surgery for skin grafts. 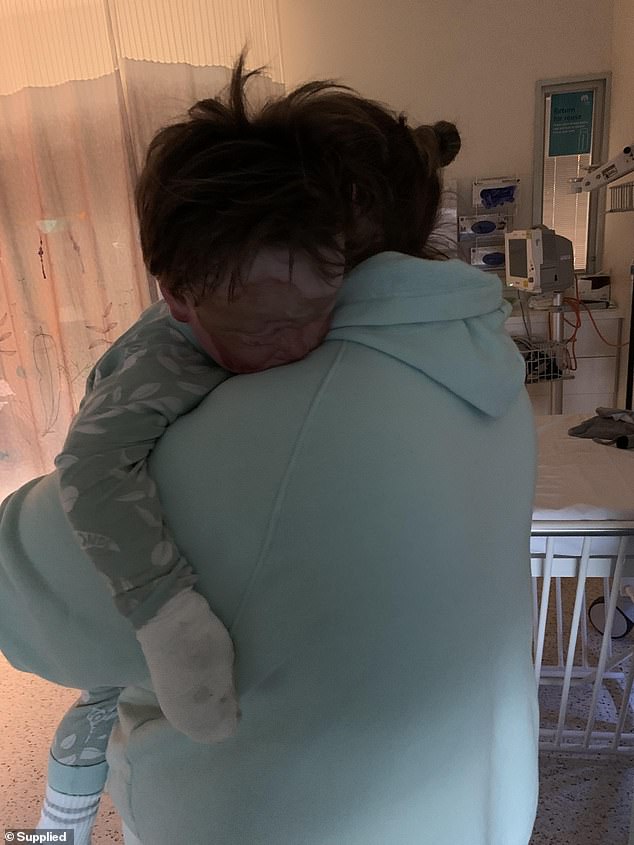 Tanner, 1 (pictured) in a high-intensity ward at the Royal Children’s Hospital in Melbourne after suffering serious burns to his face, hands and upper chest.

As the can exploded, the force knocked the boys’ mother off her feet with the young brothers who were in close proximity to the fire suffering horrific burns.

Both boys suffered extensive burns to their faces, hands and upper chest and were treated by paramedics on scene before being airlifted to the Royal Children’s Hospital in Melbourne.

Xander was immediately put on a ventilator and taken straight to the ICU due to the seriousness of his injuries.

His younger brother Tanner was admitted to a high-intensity ward to undergo treatment.

‘The boys since suffering the injuries have undergone multiple surgeries but Xander has suffered even more serious injuries than this brother,’ Ms Mathiesen said.

‘Xander is going to need grafting to his face and while he is stable at the moment we are expecting him to be knocked out again very soon because the pain and shock to his body and system is so significant that he is in so much pain.

‘Tanner also has similar injuries but not to the same extent. He has first to second degree-burns on his upper body and face and both of the children will need more grafting.’ 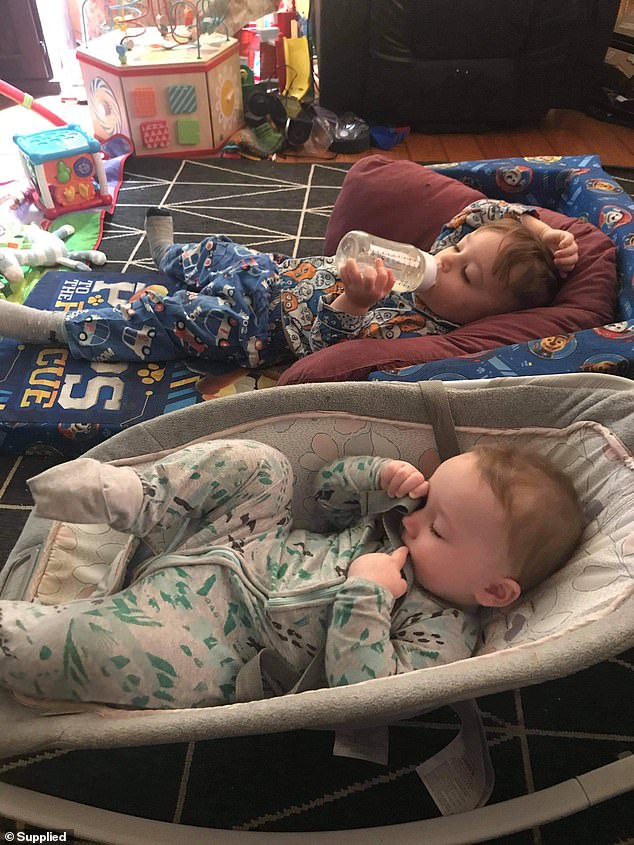 The boys aunt Carlie Mathiesen said the brothers are best mates and love the outdoors. 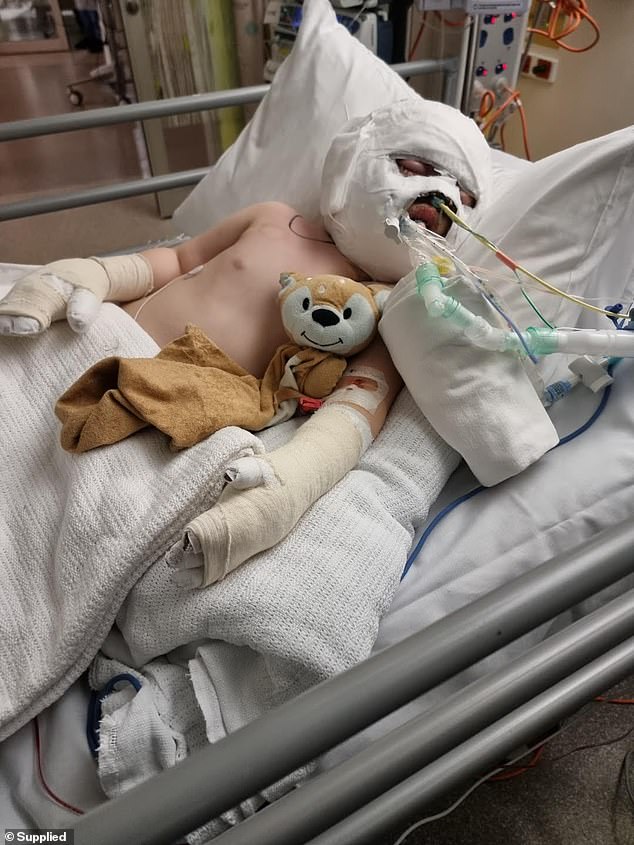 Xander (pictured) on a ventilator on the night a cardboard box which contained an aerosol can was accidentally put on a bonfire causing a large explosion. 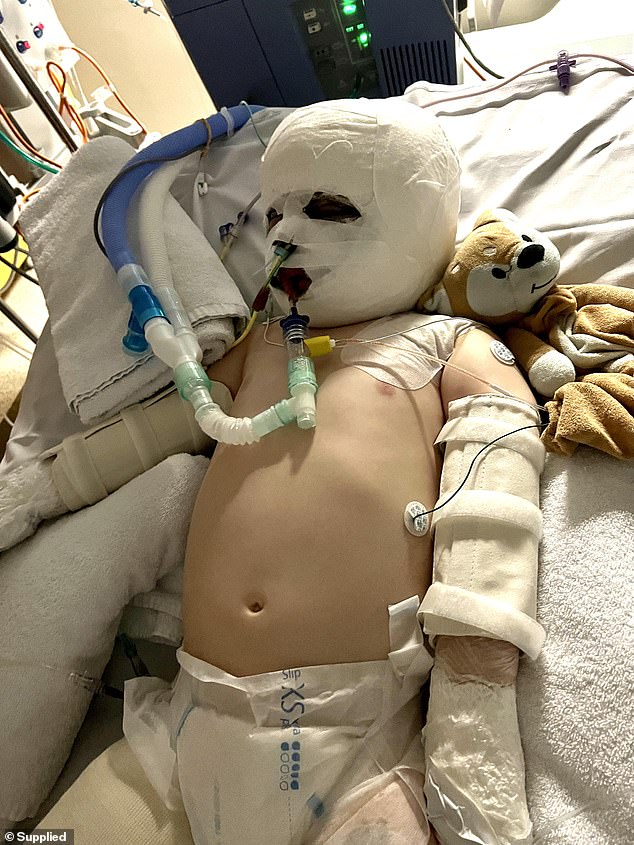 The Lansfield family is appealing for financial support as the single income family are presented with a large financial problem to treat and care for the young brothers.

Skin grafting is where skin is taken from a healthy unaffected area of the body and used to cover lost or damaged skin.

Both boys are expected to need more skin grafts on their face and hands and will have that skin taken from their thighs.

Ms Mathiesen said the boys were inseparable best mates who loved the outdoors, raising the families little lambs, and hanging out with their dad.

‘They are such beautiful country kids who love the outdoors and all things nature and animals. My heart breaks for them and I know that they are at least a month or two away from being able to go home. It just breaks my heart,’ she said.

Xander will require additional surgeries and is still in ICU, while Tanner is in a high-intensity ward, with their parents splitting their time between each child.

Ms Mathiesen said the family was struggling and had serious financial concerns as the only worker is the boys father who is self employed and unable to earn any money while in hospital with the boys.

‘The parents are doing okay but are just in such a state of shock and crisis mode. All of us are incredibly grateful for the outpouring of community support but the financial stress we are now under is immense,’ she said.

‘There will be a long road ahead especially for the boys mental and physical rehabilitation.

‘At the moment the parents need to be with their children which means the dad is unable to earn money so we really need the communities support.’ 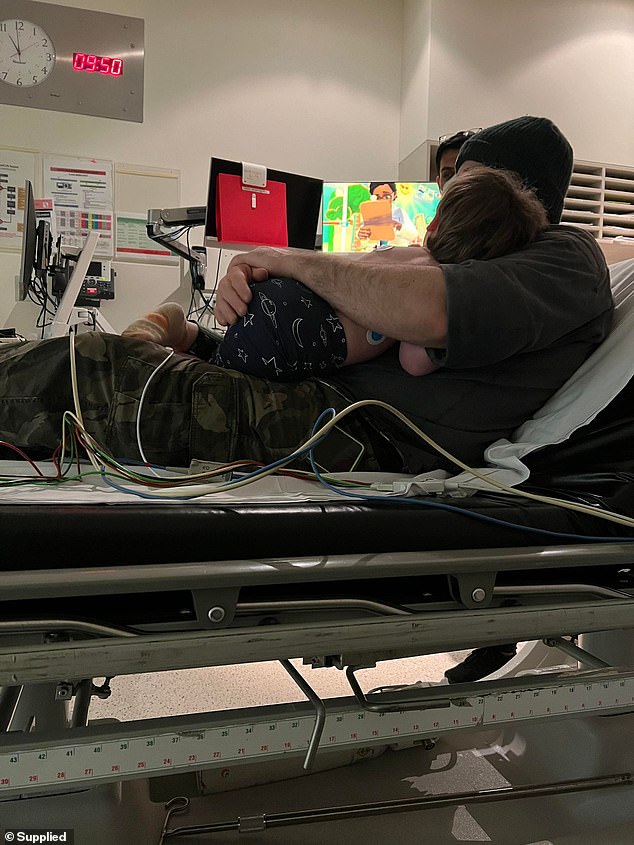 Tanner, 1 in his fathers arms as he tries to console his son in the emergency department on Friday night.

Ms Mathiesen said the family was resilient and would take it as an opportunity to teach the boys how to be resilient to prepare them ahead of the likely challenges they will now face when they start school.

‘Children can be cruel and the oldest one Xander is only a couple of years away from starting school so it is important that the family are resilient and show him how he can be resilient as well,’ she said.

Ms Mathiesen said she expected the ongoing financial expense to support the boys in their rehabilitation to be in the tens of thousands of dollars and said the bills were already piling up.

She set up a fundraiser to help pay for them, including therapy, hospital costs, medication, and physiotherapy.

‘The boys will need so much financial support to pay for things such as speech pathology and compression stockings for their grafts on the face, it will be very expensive,’ she said.