Budget at a glance: Where the money’s going

Building companies facing material and labour shortages are being stretched as they build Victoria’s massive road and rail pipeline which has again contributed to cost blowouts. The Andrews government will spend about $21 billion on projects this year. This will rise to more than $23 billion next year, before dropping to below $20 billion in the next term of government. A $2.5 billion suburban road upgrade program will cost $300 million more than expected due to market conditions, and there’s an almost $2 billion blowout on the West Gate Tunnel. 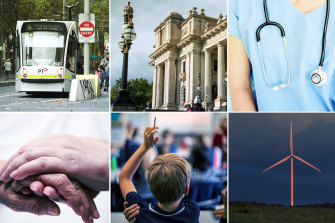 Who will benefit from this year’s budget?Credit:The Age

Victorian workers’ wages are expected to rise by 2.75 per cent next financial year with unemployment rates at the lowest since current records began. The budget provides $246 million for the government’s already announced Sick Pay Guarantee scheme providing insecure workers up to five days’ sick pay a year.

The money for Melbourne’s CBD from the state government has dried up with no money allocated, in contrast to last year when $107 million was provided for city centre rejuvenation. Instead there will be some cash for suburbs with $50 million for the already established Growing Suburbs Fund.

Four athlete’s hubs will be established in Geelong, Bendigo, Ballarat and Gippsland to prepare for Victoria’s regions hosting the Commonwealth Games. The government will spend $2.6 billion on hosting the 2026 Games, with a further $111 million to boost tourism and support events. The Games are expected to create more than 7500 jobs and contribute more than $3 billion to Victoria’s economy.

Arts funding in this year’s budget closely follows last year’s investment, when $288 million of cash was announced. This year, arts centres in Victoria are the major benefactor, to the tune of $245.8 million, $32.1 million of which will go towards the National Gallery of Victoria’s summer exhibition program to recover from the pandemic, attract tourists and create jobs. There is also funding for screen productions, as there was last year, funding for small and medium-sized creative organisations, and funding for affordable spaces and regional touring. 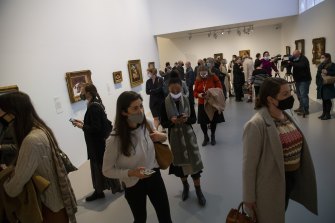 More than $32m has been earmarked for the NGV. Credit:Paul Jeffers

The government is committing $600 million as part of a sweeping package of investments to tackle crime. The budget also includes $342 million to boost Victoria Police with 502 more police officers and 50 more protective service officers. The courts will receive $41 million to address the soaring backlog of cases delayed because of the pandemic. There is also $240 million to continue to implement recommendations from the Family Violence Royal Commission.

The school building boom continues, despite the pandemic-induced dip in population, with $581.5 million for 13 new schools in outer Melbourne and $236.7 million to buy land in urban growth areas for planned future schools. Thirty-six special schools will get an upgrade, at a cost of $326 million. The teacher workforce will be boosted by 1900, at a cost of $779 million, which will also cover a reduction in face-to-face teaching hours.

As expected this year’s budget delivers on health, and Victorians should expect big improvements will be made to strained essential services – although how long it will take the serious problems facing the health system to be repaired remains to be seen. The government will invest in thousands in hiring new nurses and other health staff including doctors and paramedics. Melton is getting a new hospital, with the details of completion and funding still to be announced. Victoria’s troubled triple-zero service will see an unprecedented increase in staff, with 400 new workers promised.

Victoria’s economy is tipped to come “roaring back” from the successive shocks of the COVID-19 pandemic with economic growth, jobs, wages and population forecast to continue growing for the foreseeable future. In Treasurer Tim Pallas’ upbeat predictions for the coming years, private sector investment, as a share of economic growth, is expected to bounce back to pre-COVID levels as the government winds back its spending on fighting the pandemic and propping up the economy.

Pallas unveiled a plan to get the state’s public finances back into the black by 2025, with plans to turn a $17 billion deficit this year into a $650 million surplus in 2025 on the back of the economic recovery, with taxes on payrolls, real estate sales and gambling all tipped to keep increasing. A new “future fund” – with start-up capital from the sale of VicRoads’ licensing and registration – will be established to pay down the state’s huge debts, which are expected to hit $167 billion in 2025.

More than $1.3 billion will be spent on mental health amid warnings the nation is facing a mental health crisis exacerbated by the pandemic. A focus will be on boosting the workforce and hiring more than 1500 mental health workers, including 400 mental health nurses, 100 psychiatrists and 300 psychologists. Acute hospital care will get $490 million, with 82 new mental health beds at the Northern Hospital and Sunshine Hospital.