‘Lucky he didn’t shoot himself!’ Gunman is filmed DROPPING his shotgun while blasting his victim’s home and shattering their window

This is the moment a butterfingers gunman fails to keep a grasp of his weapon after firing two shots into a home.

CCTV footage has emerged of the man fumbling the gun out the front of a house in West Yorkshire, early on Tuesday morning.

Local police confirmed they are investigating the shooting. They were called to the scene on Clarkson Street, Ravensthorpe, about 1.18am after a resident reported hearing two loud bangs and damage to a window.

Firearms officers confirmed the damage was consistent with a shotgun discharge.

The suspect was heavily disguised in what looks like a hooded disposable suit similar to that used by police Crime Scene Investigators.

Senior Investigating Officer, Detective Inspector Kevin Daly of Firearms Prevent Investigations Team said: ‘Thankfully no-one was injured but clearly the criminal use of any firearm in a public place is a very serious matter and something we will not tolerate.

‘We are carrying out extensive enquiries to identify those responsible and bring them to justice.’

Mr Daly said he understands why the incident could cause concern within the community, but assured residents local police have increased their patrols of the area.

The footage has been widely shared on social media and the gunman has been mocked for his handling of the weapon.

One critic wrote: ‘He’s lucky he didn’t shoot himself with those skills.’

Another said: ‘So he’s an amateur… Clearly no long time use of fire arms… Lucky he didn’t shoot himself never mind anyone else’s property.

‘I’d say it’s the first time he’s fired a gun from his reaction dropping it… Must be keen to sample some prison food. All caught on CCTV… Don’t look that old either.’

One person said it likely was the force of the shotgun that forced him to drop it after firing, indicating he was not gripping the gun properly and ‘has no knowledge of how to use it’.

The footage was reminiscent of a scene in Harry Brown when Michael Caine gains the upper hand over the plastic gangster because the thug cannot work his gun properly.

In the scene, Caine delivers the famous line: ‘You have failed to maintain your weapon.’ 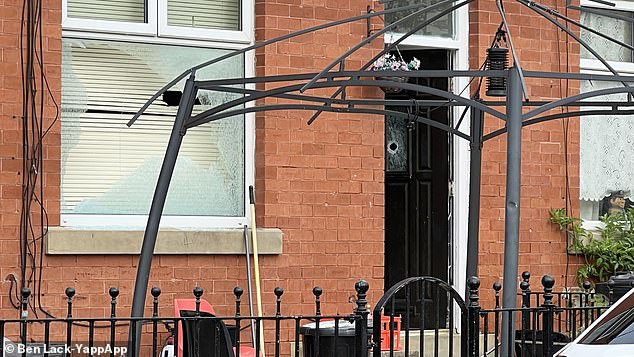 Bullet holes were visible from the front of the house, along with a shattered window