This is the moment bungling ram raiders fled empty-handed after losing a tug of war with a supermarket cash machine – which ended up flipping their getaway car.

Four masked men attached a tow rope to a free-standing ATM at the Co-op store in Whitkirk, Leeds, and made repeated attempts to drag it out the shattered widow using a Nissan 4X4 on Tuesday night.

In a clip filmed by a shocked onlooker, the car can be seen gathering speed as it attempts to yank the cash machine out – only to end up flipping on its side due to the weight of the ATM. 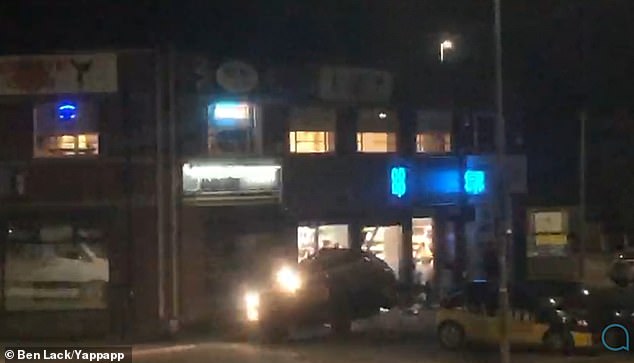 Four bungling thieves were given a shock when the Nissan 4×4 they used to steal an ATM toppled over during their ram raid in Whitkirk, Leeds 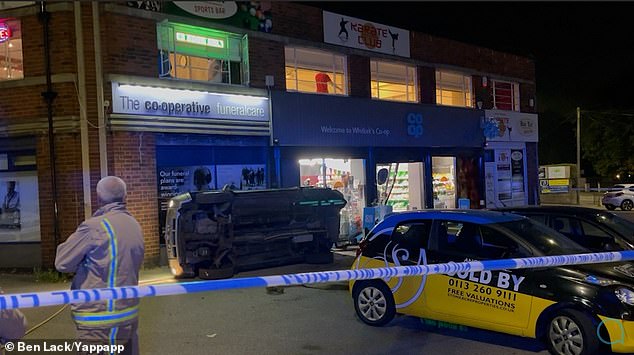 The group of men were forced to flee, leaving the car behind, after they realised their getaway vehicle was no longer useful

Several people involved in the attempt theft can be seen scrambling around the car as they try to get the driver out and make their escape.

The man filming can be heard bursting into a fit of laughter at the bungled attempt to steal the cash machine.

Before the man began filming the car had made several attempts to pull the machine clear before before toppling over.

Footage of the incident at the local Co-op has caused hilarity on social media and been widely shared.

The disastrous raid began when the masked men ploughed into the front of the shop, causing thousands of pounds damage.

Three masked men armed with baseball bats jumped out and threatened store staff while the fourth gang member stayed at the wheel ready to haul away the cash machine. 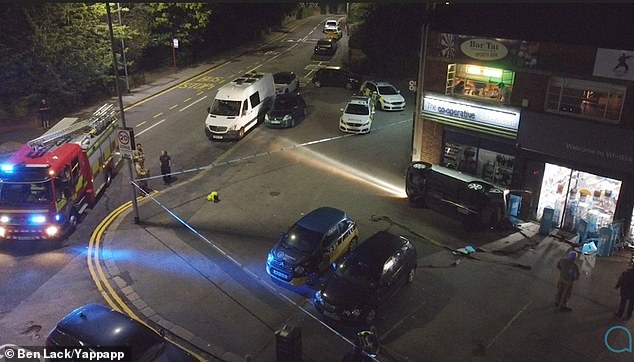 The man attached a tow rope to the ATM and then stood clear as the silver Nissan X-trail revved up at the front of the Selby Road store.

After the machine failed to budge, the raiders watched in horror as the £30k vehicle toppled onto its side.

With no ride, and no cash, the four men were forced to flee on foot.

The fire service was called in to make the building and wrecked vehicle safe and the store was cordoned off for painstaking forensic examination.

Appealing for witnesses, West Yorkshire Police said: ‘Four masked men had pulled up outside in a silver/grey Nissan X-Trail 4×4. 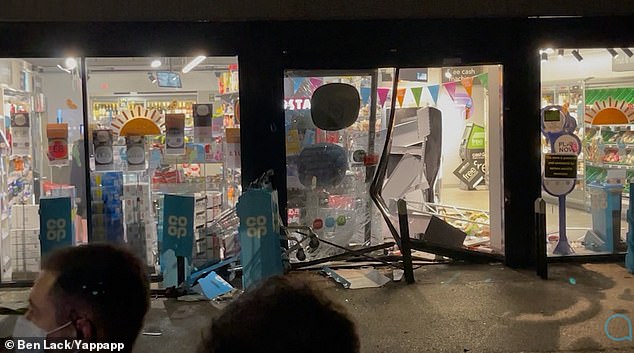 ‘Three of the men entered the store and threatened staff before attaching a tow rope to the free-standing ATM.

‘They made several attempts to pull the ATM out but were unsuccessful, with the vehicle being pulled onto its side on their final attempt.

‘The men then ran off empty-handed along Hollyshaw Lane. Significant damage was caused to the store during the incident.’

Anyone who witnessed the incident or who has any information that could assist the investigation is asked to contact Leeds District CID via 101 quoting crime reference 13210454808 or online via live chat.