Home » California vet to go to prison, but only after Tokyo Olympics

Sacramento: An Olympic equine veterinarian has been sentenced to six months in a US federal prison and six months of home detention after pleading guilty to tax evasion.

Jack Ray Snyder, who has treated horses at five Olympic Games and has travelled the world volunteering his services, had faced a prison term of up to five years.

But after he pleaded with US Senior District Judge William Shubb for a sentence of probation that would allow him to continue treating animals and work at the upcoming Tokyo Olympics, the judge agreed to allow Snyder to report to prison on August 17, nine days after the games conclude. 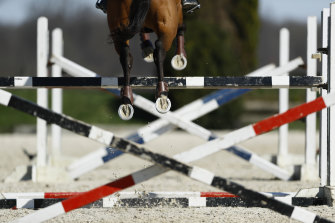 A vet who worked at five Olympics will be allowed to defer his prison sentence for tax evasion until after the Tokyo Games.Credit:AP

“I deeply regret and am really remorseful for this whole issue,” Snyder told the judge. “My life is devoted to people and animals. It always has been.

“I do volunteer work, I help animals of the homeless people, I help and love rescue dogs.”

Snyder’s lawyer, James Lassart, had urged the judge to sentence Snyder to probation, arguing that he could do more good for society outside prison.

“He has volunteered at the San Diego Zoo,” Lassart said. “He has actually performed surgery on giraffes and elephants.

“I’m asking the court not to impose any jail time. Put Dr Snyder on probation, allow him to pay a fine. He’ll make immediate restitution and he then can do community service […] This is a case where incarcerating Dr Snyder is not necessary. He’s sorry. He’ll never do this again.”

But Shubb was not convinced, asking Lassart how a sentence of probation would deter others from similar crimes.

“He’s been pilloried in the press, he’s humiliated, his family’s humiliated,” Lassart replied. “Anyone who’s in his position would be deterred from ever doing this. Dr Snyder has suffered greatly because of his renown.”

Snyder, who spent 30 years as a professor at UC Davis and splits his time between homes in Truckee, California, and Florida, baulked at pleading guilty, initially trying to blame an assistant for his tax troubles before Shubb ended that hearing and said he would not allow him to enter a guilty plea unless he was, in fact, guilty.