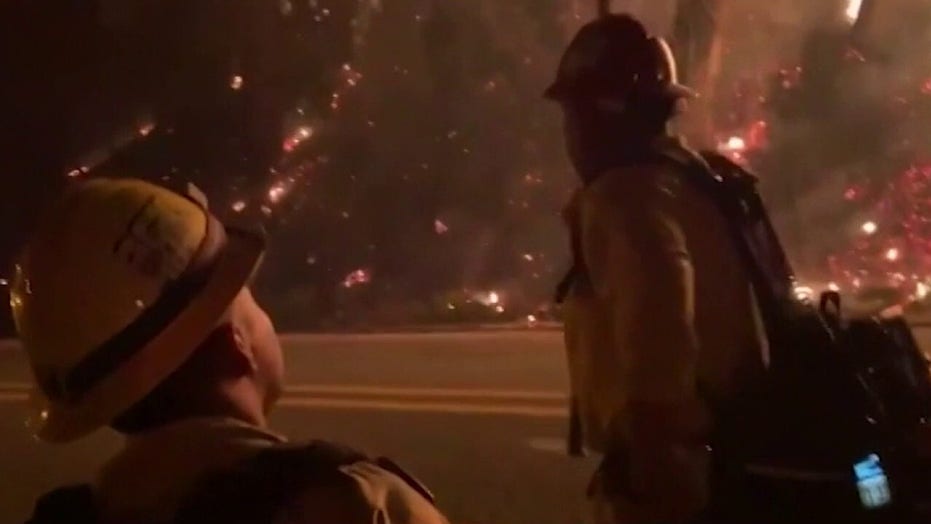 An explosive wildfire that's spurred mass evacuations in California's wine country has tripled in size, but officials are hoping better weather conditions on Tuesday will allow them to get a handle on the blaze.

"The fire has expanded into Sonoma County at a dangerous rate of spread," the agency said.

As of Monday night, officials said that 113 structures have been destroyed and over 8,500 are threatened by the blaze, which began on Sunday and quickly spread. 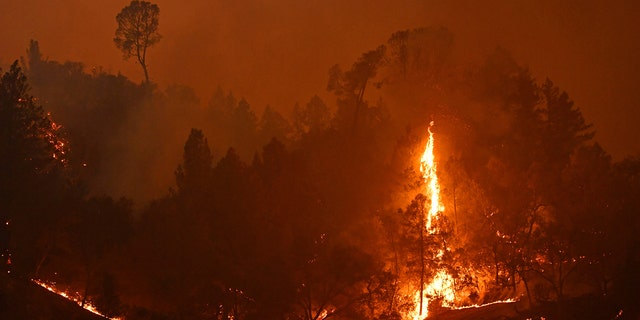 The Glass Fire burns in the hills of Calistoga, Calif., on Monday, Sept. 28, 2020. Calistoga is under mandatory evacuation on Monday night.
(Jose Carlos Fajardo/Bay Area News Group via AP)

Three fires merged and scorched through vineyards and mountains into eastern parts of Santa Rosa. Some 70,000 people are under evacuation orders, including the entire 5,000-plus population of Calistoga in Napa County.

Cal Fire shared a video of what the fire looks like from the air from the north end of the blaze just northwest of the town of Angwin.

The Sonoma County Sheriff's Office said that as of 10 p.m. Monday, over 33,800 people have been evacuated from their homes and another 12,624 are under warning status.

"Although we don’t have a specific number, we know there have been home losses in the burn areas and our collective hearts go out to all who have lost their homes in the fire thus far," the sheriff's office said.

But officials said Monday that deputies trying to get people to leave Sunday night as the fire spread encountered resistance from those weary of evacuating.

Sonoma County Sgt. Juan Valencia told KTVU-TV there have been a few people who stayed behind and might have been burned in some areas. 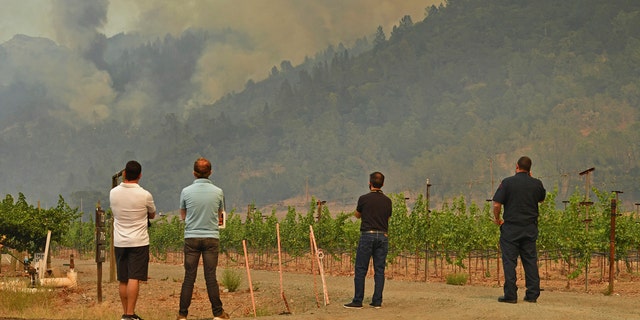 People gather to watch as the Glass Fire burns above in the hills of Calistoga, Calif., on Monday, Sept. 28, 2020.
(Jose Carlos Fajardo/Bay Area News Group via AP)

Those who have been forced from their homes have described major traffic jams as thousands head to safety. 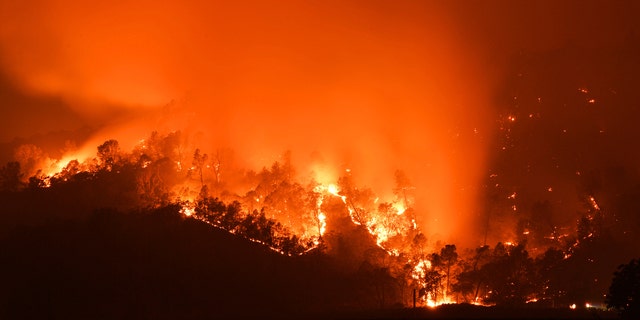 Smoke billows into the sky as the Glass Fire burns in the hills of Calistoga, Calif., on Monday, Sept. 28, 2020.
(Jose Carlos Fajardo/Bay Area News Group via AP)

Sonoma County Supervisor Susan Gorin, who lives in the Oakmont area of Santa Rosa, told the Associated Press it took her nearly two hours of crawling along a jammed road to reach safety. She saw three neighboring houses in flames as she fled.

“We’re experienced with that,” she said of the fires. “Once you lose a house and represent thousands of folks who’ve lost homes, you become pretty fatalistic that this is a new way of life and, depressingly, a normal way of life, the megafires that are spreading throughout the West.” 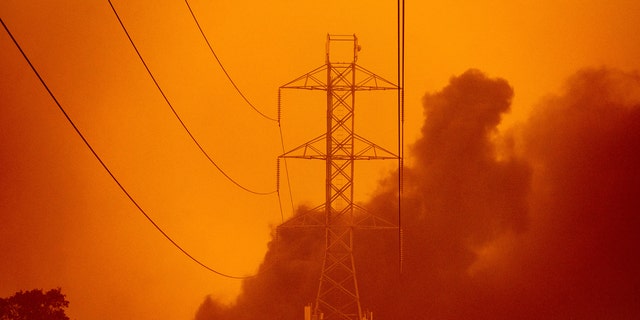 Utility Pacific Gas and Electric said 37,000 customers were without power in the areas of the fire by Monday evening. In Napa County, there were 288 customers whose power had been intentionally cut as a public safety power shutoff while the rest were caused by fires. 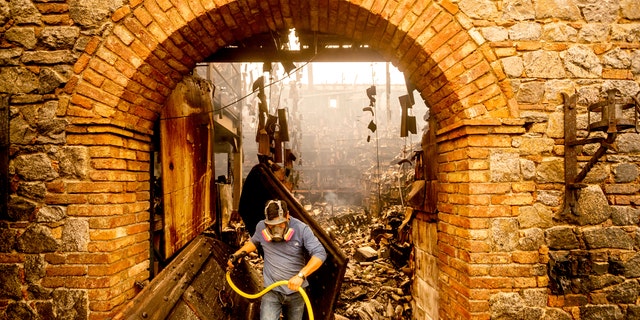 The blaze has engulfed the Chateau Boswell Winery in St. Helena and at least one five-star resort in the famed Napa Valley region. 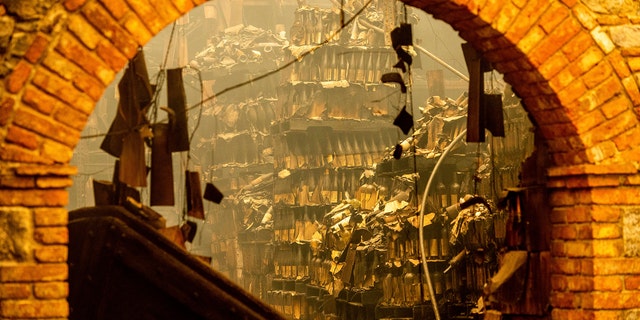 In the forested northern part of the state, more than 1,200 people were evacuated in Shasta County for the Zogg Fire.

Three people have died in that fire, Shasta County Sheriff Eric Magrini said Monday. He gave no details but urged people who receive evacuation orders: “Do not wait."

California Governor Gavin Newsom declared a state of emergency in three counties — Napa, Sonoma and Shasta — because of both blazes. 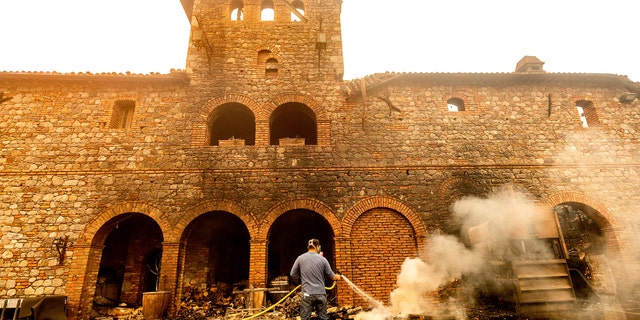 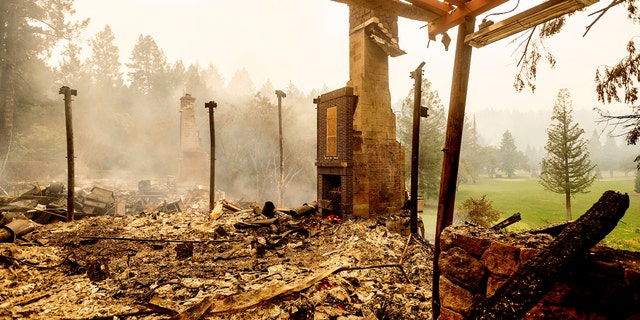 A chimney stands, Monday, Sept. 28, 2020, at the Restaurant at Meadowood, which burned in the Glass Fire, in St. Helena, Calif.
(AP Photo/Noah Berger)

"The smoky skies that we're under is a sign that there's not a lot of wind," he said at an evening press briefing.

The Glass Fire is one of nearly 30 wildfires burning around California and the National Weather Service warned that hot, dry conditions with strong Santa Ana winds could remain a fire danger in Southern California into Tuesday.