The hunt for a suspect in the stabbing rampage that left 10 people dead in a Canadian Indigenous community entered its fourth day Wednesday as residents mourned their loved ones and a spotlight shined on the alleged killer’s violent past.

Myles Sanderson, 32, has a history of violence that includes 59 criminal convictions and had been serving a sentence of more than four years when he was freed more than a year ago. The parole board wrote that “it is the board’s opinion that you will not present an undue risk to society if released on statutory release.

He has been sought since May after failing to meet with his parole officer. Public Safety Minister Mendicino called for an independent review of the parole board assessment that led to Sanderson’s release.

“I want to know the reasons behind the decision, and I want to know if any mistakes were made,” Mendicino said. ”I’m extremely concerned with what occurred here.”

Hours after Sunday’s attacks at 13 locations in and around the James Smith Cree Nation reserve in Saskatchewan, the manhunt began for Sanderson and his brother, Damien. The body of Damien, 30, was found Monday in a grassy area near one of at least 13 locations where the stabbing spree occurred. Police said the wounds did not appear to be self-inflicted, but police provided few other details.

Police on Tuesday issued an alert notifying residents of the James Smith Cree Nation reserve to shelter in place. Officers with guns drawn surrounded a house, but a short time later the Royal Canadian Mounted Police said they no longer believed the suspect, Myles Sanderson, was hiding out on the reserve.

The carnage took place early Sunday. Authorities received the first emergency call at about 5:40 a.m. Within a couple hours the toll had reached 10 dead and 18 wounded on the reserve and in the nearby town of Weldon – and the hunt for the Sanderson brothers was underway.

Later that day, Myles Sanderson was seen in the provincial capital of Regina, 200 miles south of Weldon and about 100 miles from the Montana border, Regina Police Chief Evan Bray said.

“We have received information that is leading us to believe he may no longer be in this community,” Bray said late Tuesday. “Although we don’t know his whereabouts we are still looking not only in the city of Regina but expanding into the province as well.” 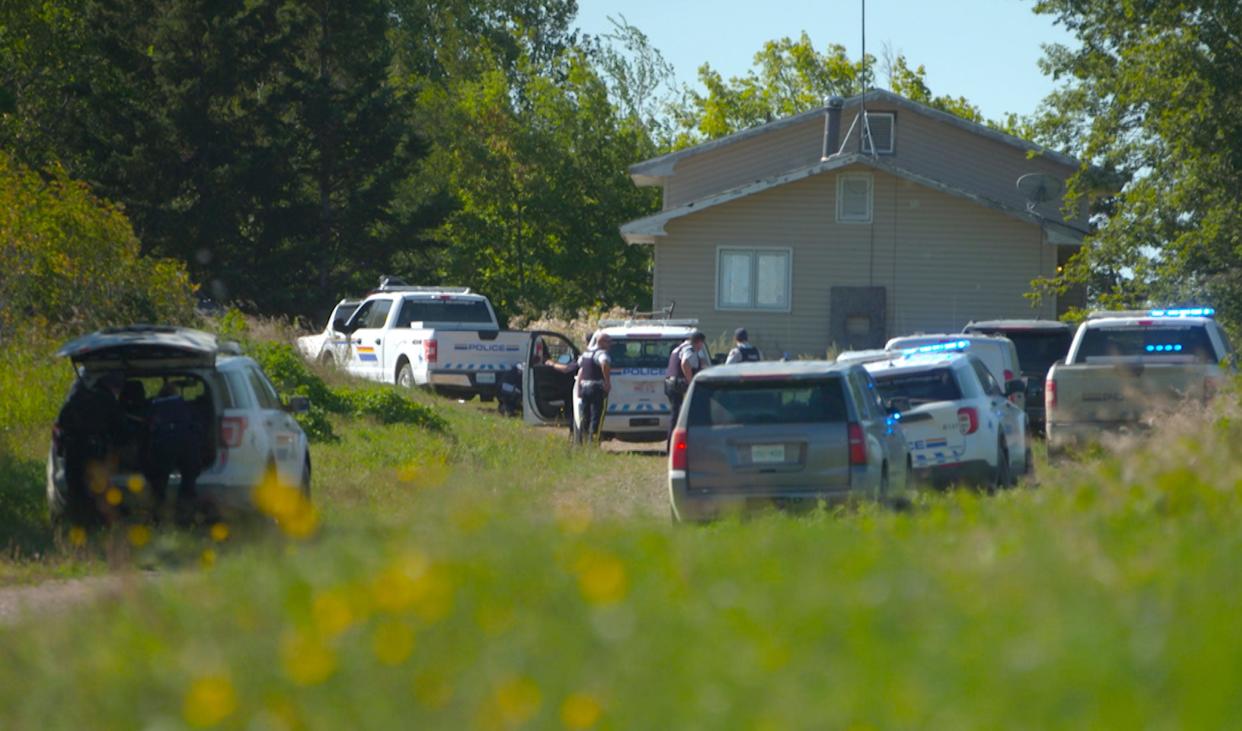 Who is Myles Sanderson?

Parole documents says Sanderson’s childhood was marked by violence, neglect and a “cycle of substance abuse, seeking out negative peers and violent behavior.” He lived between his father’s home in a city and grandparents’ house on a reserve and started drinking and smoking marijuana at around age 12. He told parole officials substance use made him out of his mind.

Such issues are not uncommon on the reserve, some residents say.

“The drug problem and the alcohol problem on these reserves is way out of hand,” said Ivor Wayne Burns, whose sister was among the attack victims. “We asked before for something to be done.”

Said Chief Bobby Cameron of the Federation of Sovereign Indigenous Nations: “This is the destruction we face when harmful illegal drugs invade our communities.”