Charles III received the warmest of welcomes in the hillsides

ROBERT HARDMAN: Charles III received the warmest of welcomes in the hillsides, where the new King gave half a speech in Welsh

Having held the title for longer than anyone in its 855-year history, the monarch formerly known as the Prince of Wales came to Cymru today to hang up his feathers and his ‘Ich Dien’ motto.

And in doing so, he also assured his Welsh subjects that when it comes to his love of Wales, nothing is going to change.

‘It was a privilege to be Prince of Wales for so long. Now my son William will bear the title. He has a deep love for Wales,’ said the King, stressing that this ran in the family.

All of this was said in Welsh, by the way. Note, too, the use of the word ‘land’ instead of ‘principality’, a word which sticks in the craw of Welsh nationalists.

Today marked the end of the King’s fast-track tour of all the home nations. It had always been his plan, immediately upon his accession, to visit all the capitals of the kingdom to underline the monarchy’s duty to promote the ‘U’ in UK. At the same time, however, it is also his duty to embrace and celebrate separate national identities and aspirations. A handful of demonstrators turned up in Cardiff today to make it clear that they do not want a monarchy of any sort. 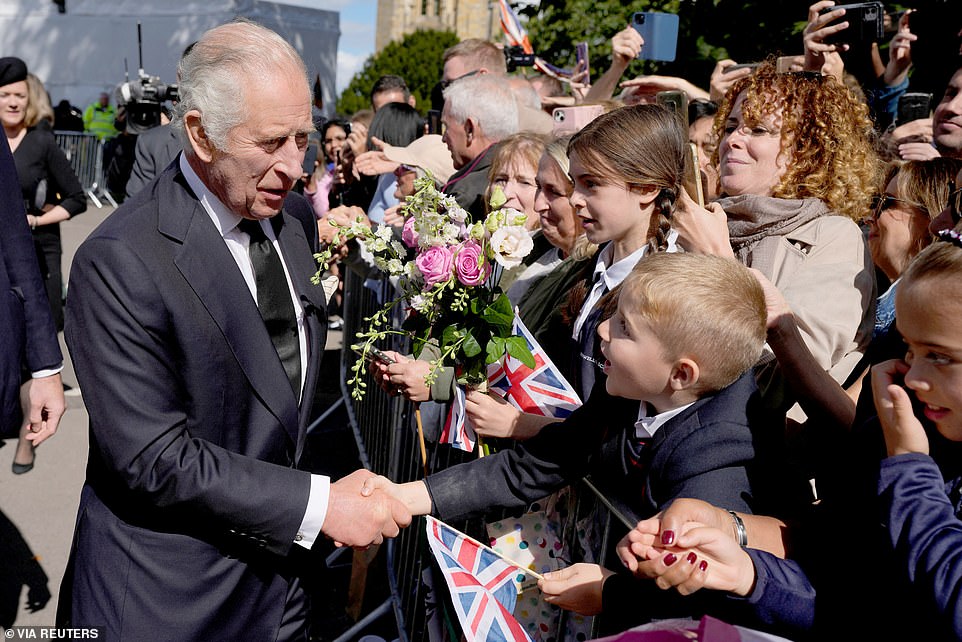 Grateful: The King shakes hands with a young boy after the cathedral service 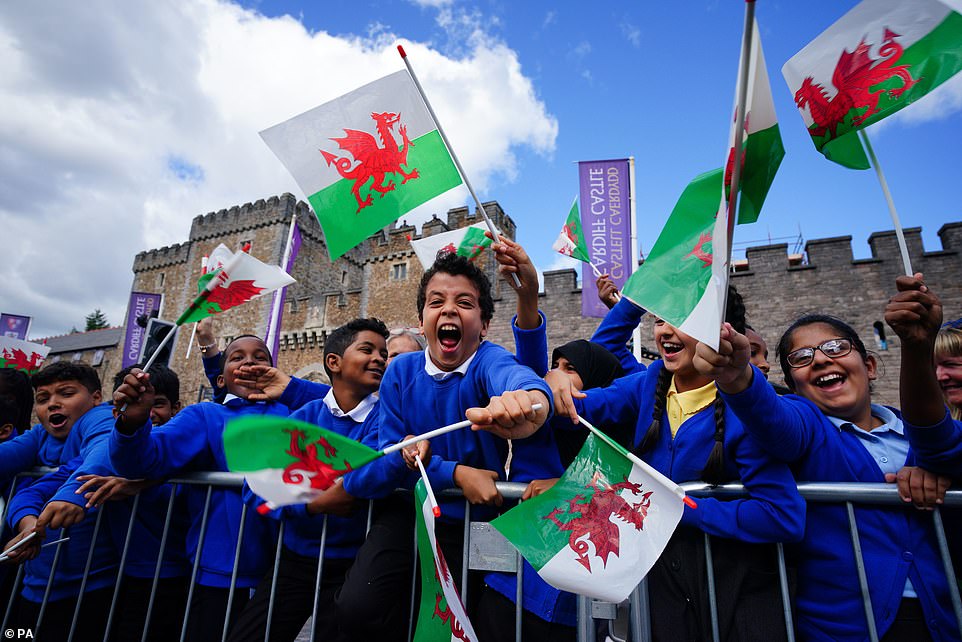 Welsh pride: Excited schoolchildren wait for the King to arrive at Cardiff Castle

One sign read: ‘We want a democracy, a Welsh republic.’ Other protesters, however, had banners honouring Welsh national hero Owain Glyndwr, who was no less posh or royal than the Windsors back in the day.

Nor was he known for his walkabouts, unlike the King whose schedule ran way over time yesterday as he repeatedly glad-handed his way down various crush barriers despite a lot of eye-rolling and watch-checking from his nervous aides.

The protests were tiny, largely well-behaved and, in the words of the Welsh First Minister Mark Drakeford, a ‘footnote’.

The overwhelming majority of those who turned out across Cardiff were delighted to see the first visit of the man they had always called Prince of Wales return as King of Wales.

Even the royal pen worked properly – not least because the King had brought his own.

The day started with an appropriately sombre atmosphere: A service of prayer and reflection for the life of the late Queen at Llandaff Cathedral. Unsurprisingly, the music was of the highest order, with the finest rendition of God Save The King we have heard since last week’s grim news, courtesy of the trumpeters of the Regimental Band of the Royal Welsh and full organ.

That followed on from the de facto Welsh anthem Hen Wlad Fy Nhadau or Land Of My Fathers. 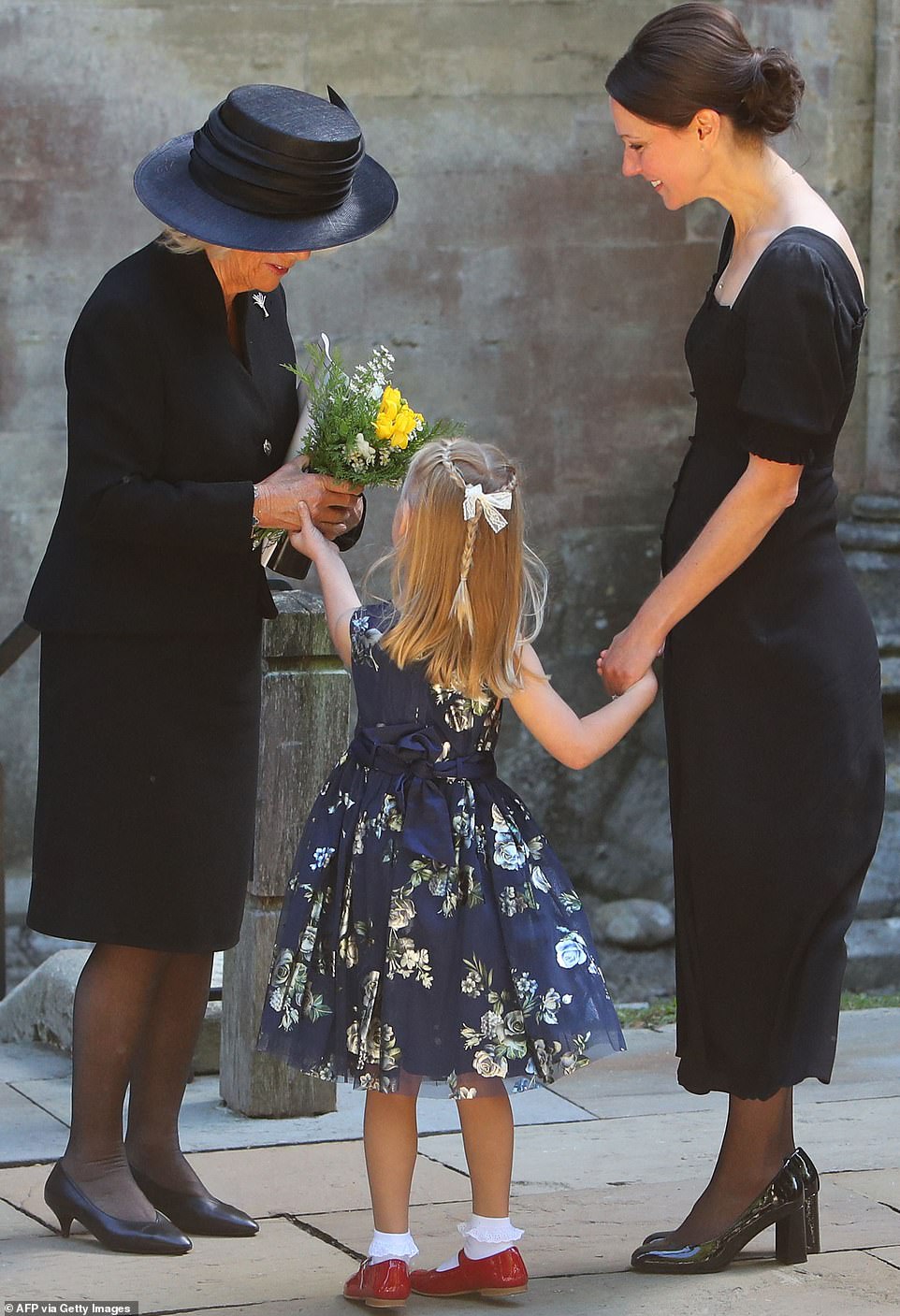 For you: The Queen Consort receives a bouquet of flowers from five-year-old Keira Hillebert watched by her mother Krisi outside Llandaff Cathedral yesterday 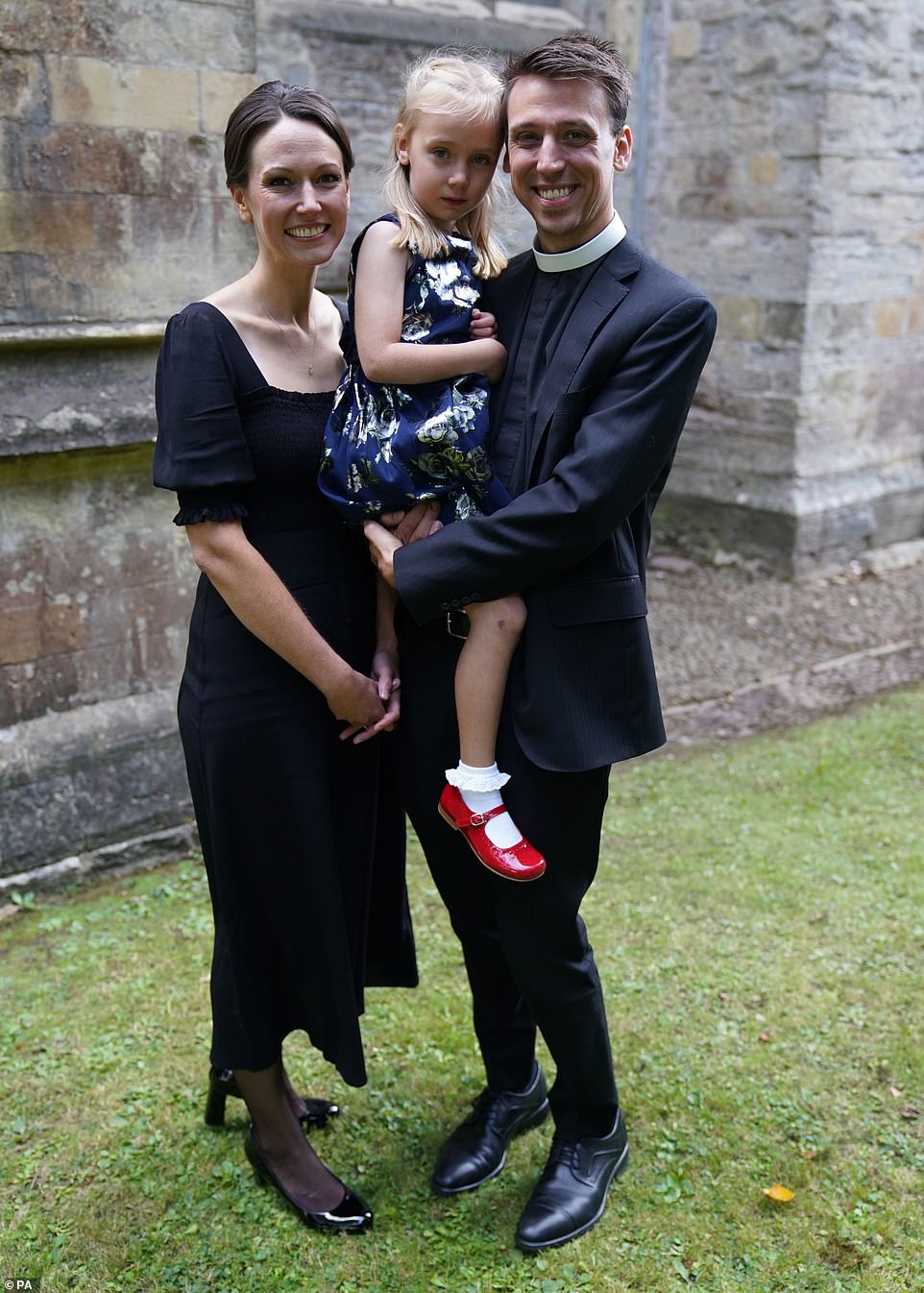 Keira Hillebert, pictured with her parents Krisi and Jordan, got a handshake from the Queen Consort after presenting her with a bouquet of flowers 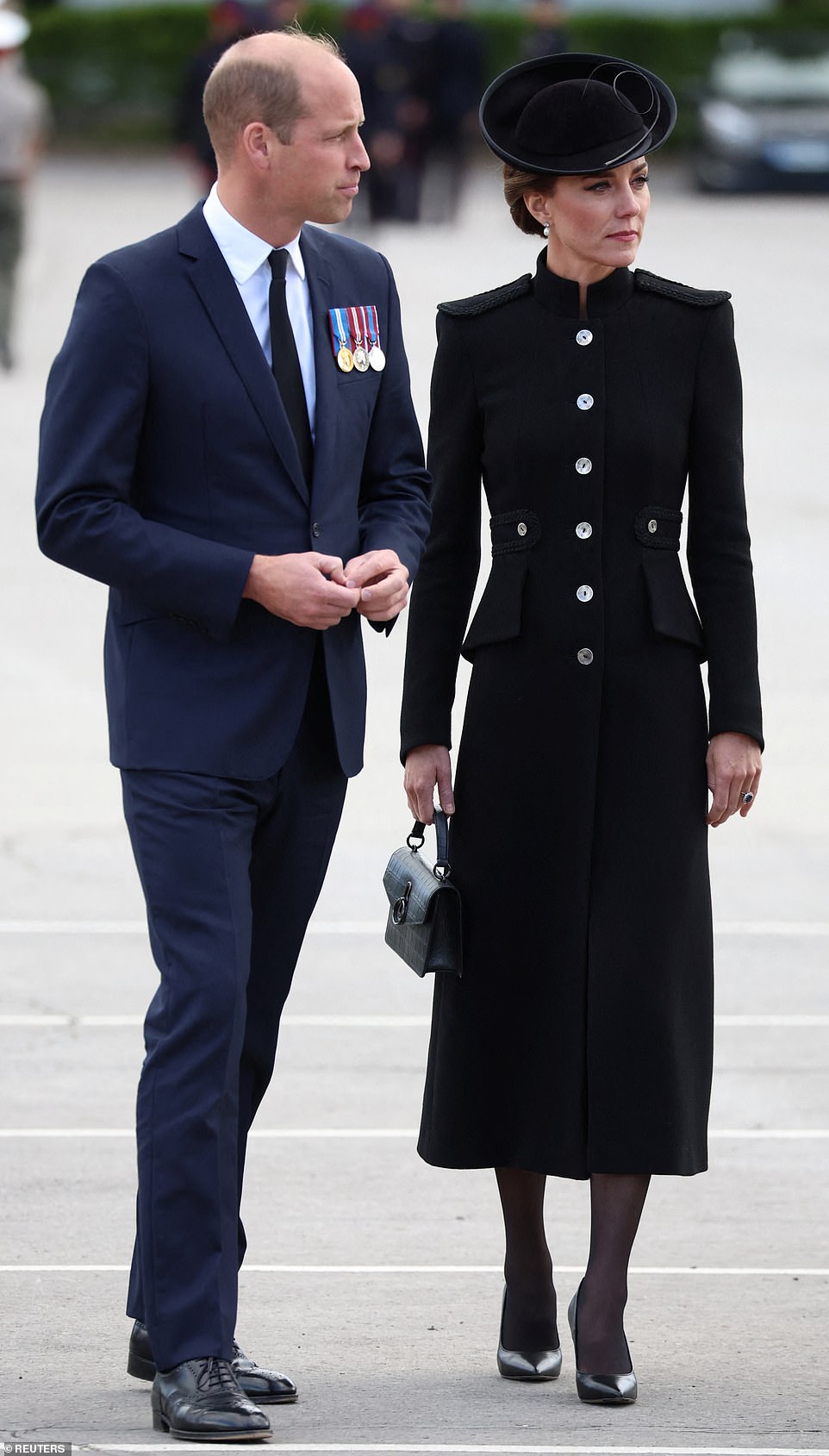 William, the new Prince of Wales and Catherine, new Princess of Wales, walk during their visit to meet with soldiers at ATC Pirbright today

In the King’s case, it could equally be called Land Of My Mother’s Dogs, so said the Llywydd or presiding officer of the Senedd, Elin Jones. Recalling the special parliamentary session held to honour the late Queen, she said: ‘As you may imagine, there were many mentions of corgis – her constant, lifelong Welsh companions.

‘And of course, the members here representing Pembrokeshire were particularly keen to champion her preference for the Pembrokeshire corgi.’

This, she added, had always been a source of jealousy among fans of the Cardiganshire corgi, not least herself as the Senedd member for Cardiganshire.

The formal message of condolence was proposed by Mr Drakeford who spoke of the late Queen’s reign, ‘unrivalled in its length and its reach’.

He also observed that the Senedd had met on a Sunday for the first time in its history in order to pay tributes to the Queen.

The King replied that it had been a privilege to honour his Welsh motto, ‘Ich Dien’ – ‘I serve’ – and he would continue to abide by it. 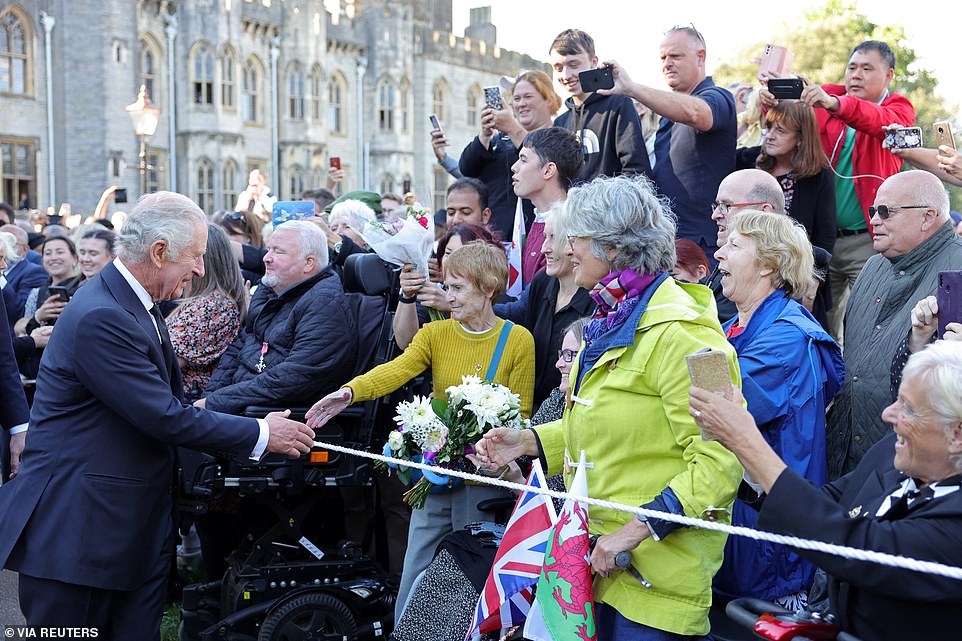 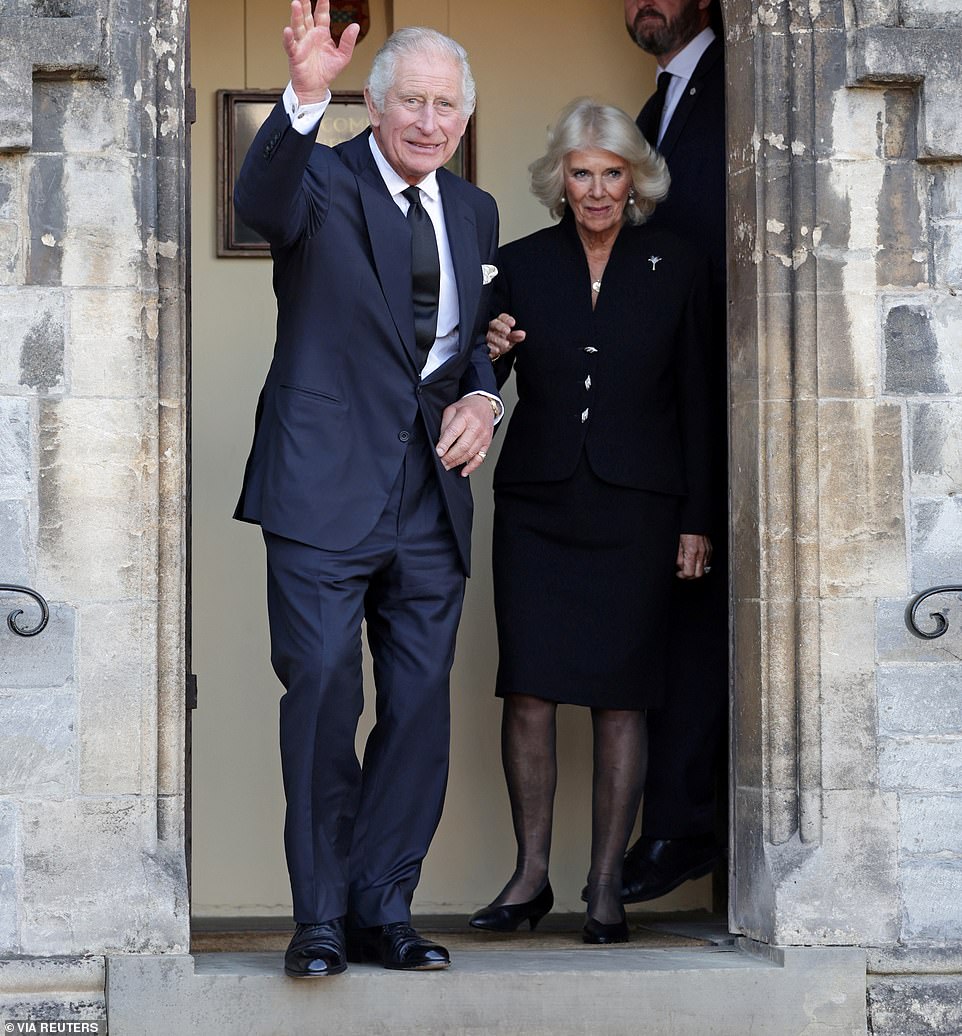 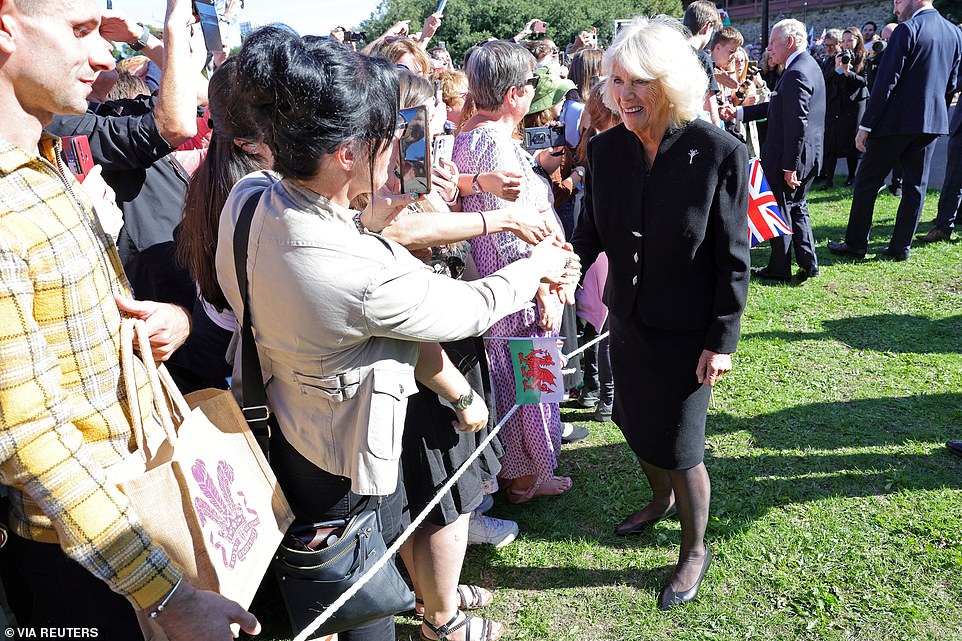 Camilla, Queen Consort meets with members of the public at Cardiff Castle today 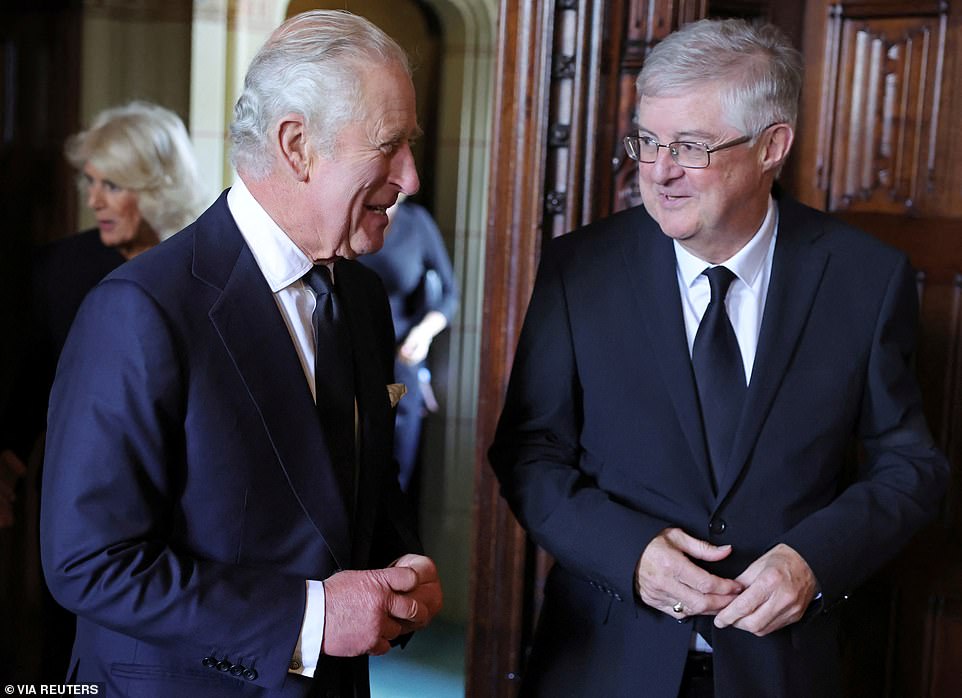 His speech was delivered half in Welsh and half in English, something which impressed many of the Senedd members who had not been expecting a 50:50 mix.

Though he spent a term studying Welsh in Aberystwyth in his student days, that was more than half a century ago. I am told that the King had been taking extra Welsh tuition in the run-up to today from his Welsh-speaking deputy private secretary Dr Grahame Davies.

It means that there is now a fluent Welsh-speaker at the highest echelons of Buckingham Palace.

The King was also reunited with some old faces from his days as Prince of Wales. Dr Manon Antoniazzi, who used to run the Welsh and cultural operations at Clarence House, is now chief executive of the Senedd.

And, for much of the visit, the King was serenaded by Claire Jones. Fifteen years ago, he had appointed her as official harpist to the Prince of Wales. 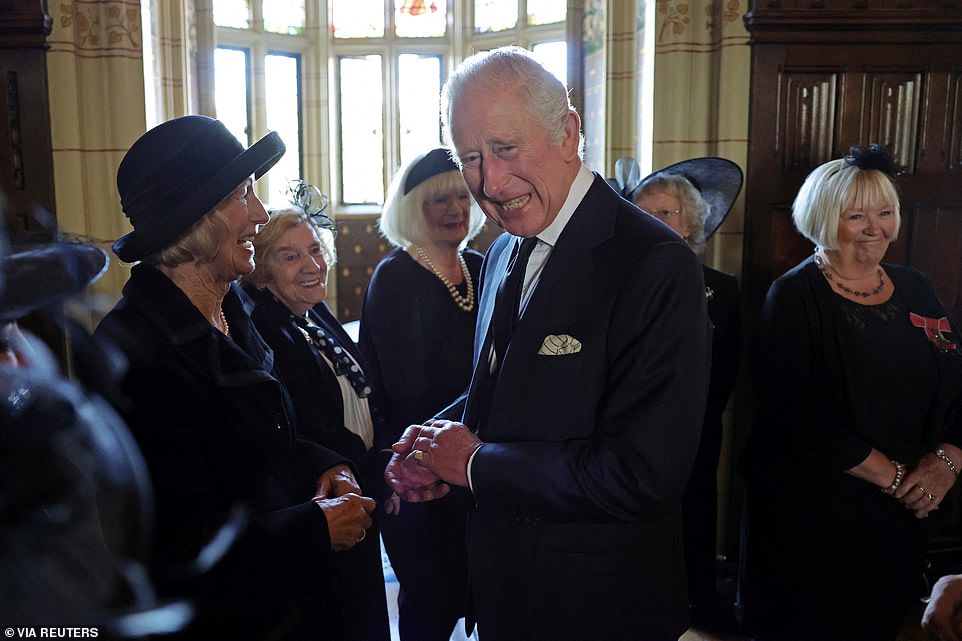 The King left via a walkabout through a large crowd of well-wishers. Ogwen Williams, 49, remembered being ‘dragged through the rain to see Charles and Diana’ shortly after the royal wedding in 1981. She still looks back fondly on the day and had dragged her own children along to see the new monarch. ‘He’s going to be a great King,’ she added.

Ex-soldier Hannah Jarvis, from Abergavenny, had brought her children, Harriet, eight, and Hugo, six, for similar reasons. Meeting the Queen during her days in uniform had been one of Hannah’s ‘proudest days of my life’ and she had been ‘terribly upset’ by the news. Yesterday was definitely lifting her spirits.

The royal party moved on to Cardiff Castle where the King conducted audiences before a reception for Welsh charities and cultural organisations.

These included a group called the Wives of Aberfan, established in the mining village which suffered one of the worst peacetime disasters in British history. In 1966, 144 people, 116 of them children, perished when a mountain of colliery spoil collapsed on to the village school.

The Queen visited soon afterwards and was so shocked and moved that she would return several times in later life. 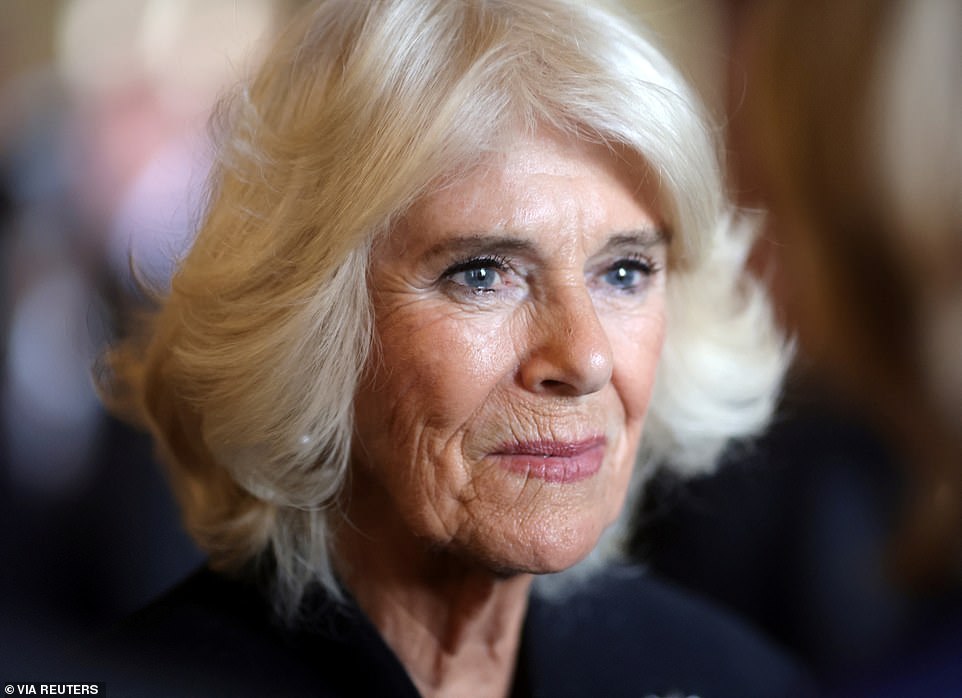 Camilla, Queen Consort is seen during a reception for local charities at Cardiff Castle today 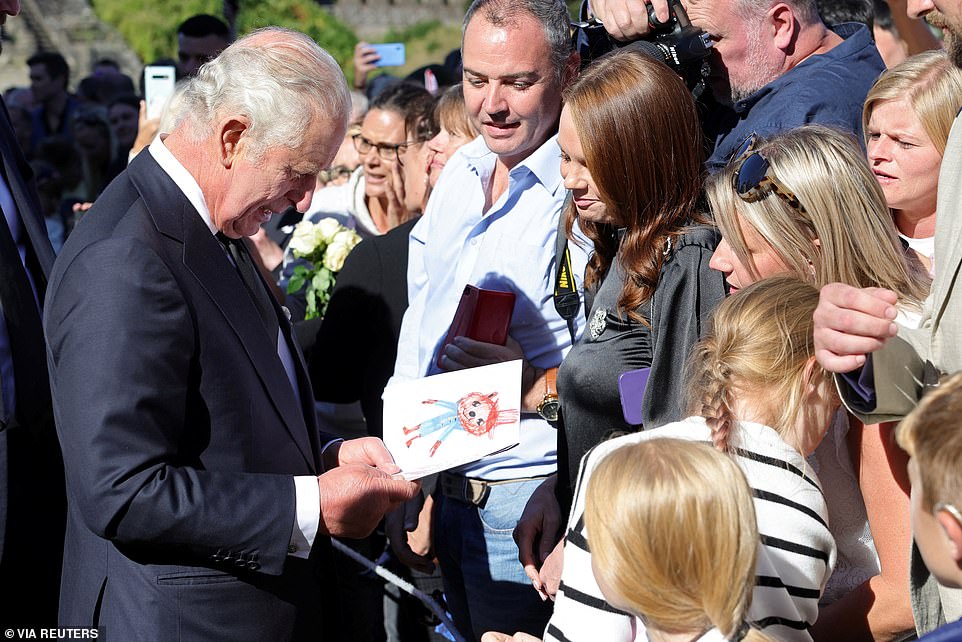 ‘I really do believe she came as a mother that day, to sympathise and empathise,’ said Denise Morgan, 67, adding that the Queen had been dutiful to the very end.

‘She made a pledge to be our Queen all those years ago and I really think she kept to that commitment, even up until two days before she died.

‘To actually meet the Prime Minister and work almost up until the last, it’s a fine testament to her.’

Back at the Senedd, members held a reception to celebrate the visit. Many talked excitedly of meeting the new Prince and Princess of Wales in the near future, though any investiture is likely to be a subject of debate.

‘I think he should come to the Senedd first to listen to what sort of event the people of Wales might want,’ said David Rees, deputy presiding officer and Labour MS for Aberavon. He fondly recalled the investiture of the last Prince of Wales because his family had bought a colour television on which to watch it in 1969.

‘The TV signal bounced off the local steelworks and everything was in double vision,’ he laughed. 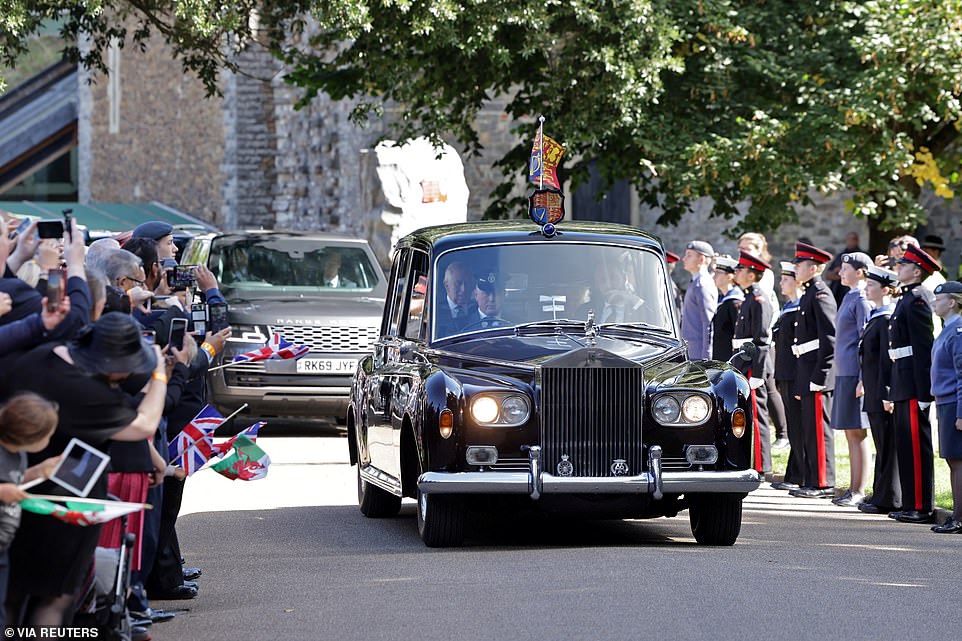 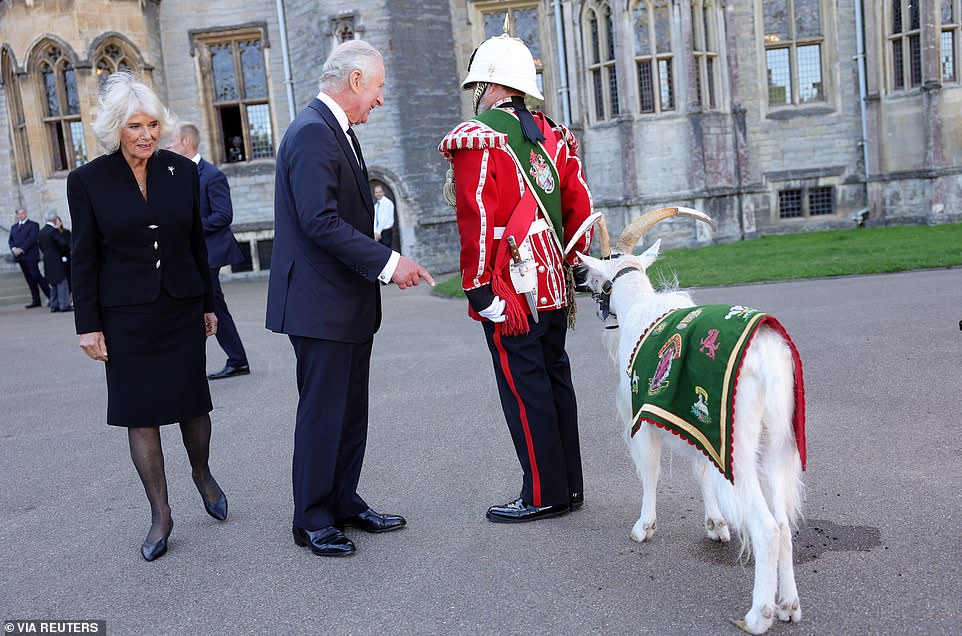 As for the new Prince of Wales’s grasp of Welsh, Mr Drakeford said that ‘nobody will be expecting miracles’ but that people would ‘appreciate’ it if Prince William took an interest in the language.

It was a particularly exciting day for Conservative MS Natasha Asghar. Her parents had met the King as Prince of Wales when her father was an MS and her grandparents had met him when her grandfather was Mayor of Brent. ‘We have pictures of him all over the house,’ she said. Now they have even more.

As the King returned to London for tonight’s Westminster vigil, he heard a sound not heard since he was a small boy, a chorus of extremely excited schoolchildren lining the streets of Cardiff singing: ‘We want the King’.

The fabled ‘welcome in the hillsides’ clearly still applies, Prince of Wales or not.