Geelong beekeeper John Edmonds used to take his bee hives up to the Sunraysia region on the Murray River every winter to help pollinate the almond farms.

It’s a well-travelled route for beekeepers, with over 277,000 hives placed on almond orchards across Australia during blossom season from August to September each year.

However, Mr Edmonds has kept his bees at home for the past five years, deterred by the low prices paid by almond farmers to beekeepers and by the impact of the pesticides and fungicides used on the almond farms on his bees. 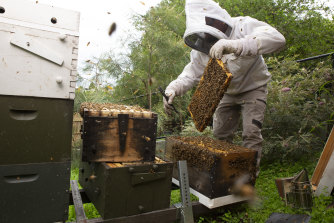 Beekeepers are concerned about the impact of chemicals on almond farms. Credit:Madeline Begley

“When we first used to go up 25 years [ago], the bees would go in and they’d come out quite strong,” he said. “But in recent years they have been using more and more chemicals that are detrimental to the bees. I’d come home and for three months after your bees aren’t very good and I like to produce honey that is clean and green and no chemicals so I decided it wasn’t worth it.”

The use of chemicals may have resulted in a mass bee kill on two almond farms in the Sunraysia region this blossom season where millions of bees died.

One beekeeper, who did not want to be identified because he has been threatened with legal proceedings by an almond farmer, said he arrived at one of the farms to pick up his bees in September and found most of them were dead.

“There were piles of dead bees when I arrived, I’m not the only one, there are 30 or 40 beekeepers, which means thousands of hives,” he said. “In a world where insects are some of the most important little creatures in pollinating and providing our food, this sort of damage on this monoculture is just not acceptable.”

Agriculture Victoria has collected samples of dead bees found near a hive at an almond orchard in the Sunraysia region which are being tested for a range of pesticides.

A spokeswoman for Agriculture Victoria said an estimated 277,000 beehives were moved to the Sunraysia region for the 2021 almond pollination season and having such high hive density comes with some biosecurity disease risk.

“As the matter is currently under investigation it is inappropriate to make further comment,” the spokeswoman said. “All complaints received by the department are taken seriously and investigated as appropriate and in accordance with departmental procedures.”

Maximum penalties for chemical misuse offences can be more than $72,000 for a corporation, or $36,000 in any other case

What’s happened in Sunraysia is a familiar story around the world.

In the United States, beekeepers who send their hives to the almond farms have seen their bees die in record numbers with The Guardian reporting 50 billion bees – more than seven times the world’s human population – wiped out in a few months during winter 2018-19.

Beekeepers attribute the high mortality rate to pesticide exposure, diseases from parasites and habitat loss, but environmentalists and organic beekeepers are concerned about the almond industry’s mechanisation of one of nature’s most delicate natural processes. 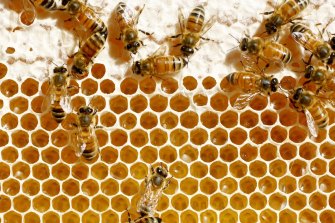 The almond industry relies on bees for pollination.Credit:Steven Siewert

Australia’s $1.8 billion almond industry is booming driven by our thirst for almond milk and the growth in plant-based eating and non-dairy alternatives.

Almonds have grown from a harvest of 10,000 tonnes in 2003 to one of 120,000 tonnes last year, and Australia is the second biggest producer of the nuts in the world.

It’s increasingly much more lucrative for beekeepers to hire their hives out to pollinate almond orchards than it is to produce honey, with beekeepers receiving just under $150 a hive to put their bees on an almond farm.

However, beekeepers describe working with almond farms as a “David and Goliath” situation where the small beekeepers are powerless.

“These almond growers have multimillion dollars behind them and we are just the little guys trucking our bees, working 18 and 20-hour days during spring and summer just to ensure we’ve got healthy bees,” one beekeeper says.

Another commercial beekeeper who lost an estimated $600,000 worth of bees in the bee kill, and also wants to remain anonymous because of the threat of legal repercussions, said he has no doubt the bees were killed by fungicide spraying.

However, the beekeeper says the risk of death is one that beekeepers who put their hives on almond farms have signed up for.

“It’s like playing with fire,” he says. “If you’re a beekeeper and you hire your bees out basically we’re just gigolos that put the bees out there as if we employed hookers.”

The beekeeper says while it’s devastating for beekeepers to lose their bees, they know the risk.

“Our bees get put in there and the risk is death by insecticide and fungicide,” he said. “That’s just what we get paid for. When you sign up for a pollination contract like that, you’re not going into an organic farm right? So, we know there is risk involved and so you’re basically going to have to wear that.”

He wants people to think more carefully about the impact of almond farming on the bee population.

“I mean cow’s milk is bad because ‘hey you’ve got to kill a calf every year’ and that’s not fashionable anymore,” he says. “It’s one calf, or it’s millions of bees. What would you rather do? What life is worth more?”

The Almond Board of Australia is aware of the bee kill and of the beekeepers’ concerns, but chief executive Tim Jackson says it was a one-off. 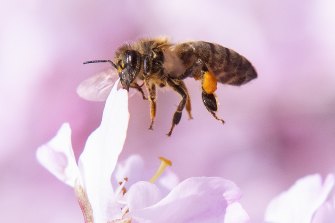 The Almond Board of Australia said the bee kill was a one off.Credit:AP

“It’s an isolated incident,” he says. “If these incidents occur we encourage the beekeepers to report them because we want to make sure that everyone’s compliant and doing the right thing.”

Mr Jackson says it is still unclear whether the kill was a result of the actions of almond farmers or neighbouring farmers.

“There was something like 40 different beekeepers involved in supplying bees to this one particular farm, so it’s really important that those bees are protected because beehive health is important to the almond industry as it is to the beekeeper,” he says.

The Almond Board this year began a partnership with Bee Friendly Farming Australia establishing bee-friendly certification and bee-friendly practices such as planting native flora around orchards to increase biodiversity and recommending only spraying pesticides and fungicides at night when bees are in their hives.

Mr Jackson says he is not sure what the legal consequences are for the beekeepers or almond farmers if an adverse finding is made over the bee kill.

“The long-term ramifications if someone’s doing the wrong thing and the beekeepers aren’t confident, then he’s going to struggle to get bees, so there is a mutual benefit in people behaving correctly,” he says.

He’s also unsure whether any financial compensation is available to the beekeepers.

“The almond industry is pretty lucrative at pollination time for their industry, but at the same time, we understand the importance of making sure those bees go in and go out as healthy as they were,” he says.

A guide to the environment, what’s happening to it, what’s being done about it and what it means for the future. Sign up to our fortnightly Clear Air newsletter here.