Fears China may be trying to cover up the the extent of a mysterious new respiratory virus that has already killed two patients emerged yesterday, as UK health officials ruled out introducing screening passengers arriving through airports.

China reported 17 new cases of the mysterious SARS-like virus on Sunday, including three in a severe condition, heightening fears ahead of China’s Lunar New Year holiday when hundreds of millions of people move around the country.

It total China has reported 62 cases in Wuhan, where the virus is believed to have originated when it jumped from animals to humans at a seafood and wildlife market in the central city.

But scientists at Imperial College London have suggested the outbreak could be more widespread than the Chinese authorities have so far acknowledged.

Experts from the Centre for Global Infectious Disease Analysis at Imperial College London believe the number of cases could be as high as 1,723. 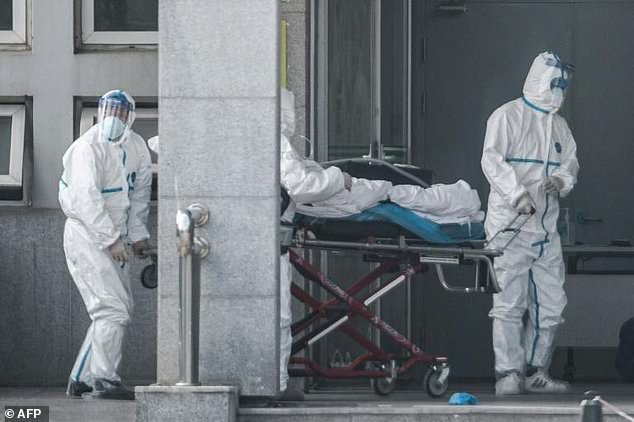 No human-to-human transmission has been confirmed so far, but Wuhan’s health commission has previously said the possibility ‘cannot be excluded’ A woman wearing a mask at the subway station in Wuhan, China. Local authorities confirmed that a second person in the city died of a pneumonia-like virus since the outbreak started in December

This is based on analysis of travel through Wuhan International Airport that has around 3,301 passengers a day and a catchment area of 19 million, with the virus having an average 10-day delay between infection and detection.

A report by ICL said: ‘It is likely that the Wuhan outbreak of a novel coronavirus has caused substantially more cases of moderate or severe respiratory illness than currently reported.

‘The estimates presented here suggest surveillance should be expanded to include all hospitalised cases of pneumonia or severe respiratory disease in the Wuhan area and other well-connected Chinese cities.’

The US said from on Friday it would begin screening direct flights arriving from Wuhan at San Francisco airport and New York’s JFK, as well as Los Angeles, where many flights connect.

Thailand said it was already screening passengers arriving in Bangkok, Chiang Mai and Phuket and would soon introduce similar controls in the beach resort of Krabi.

But Public Health England and Britain’s chief medical officer have decided not to introduce screenings at UK airports.

The new coronavirus strain has caused alarm because of its connection to Severe Acute Respiratory Syndrome, which killed nearly 650 people across mainland China and Hong Kong in 2002 to 2003. 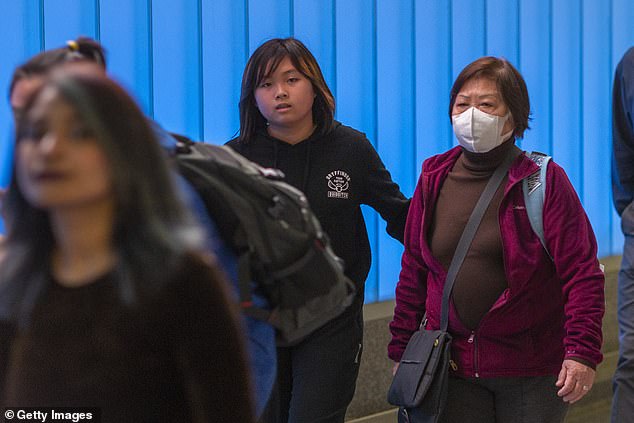 A woman arriving on an international flight to Los Angeles International Airport wears a mask on the first day of health screenings for coronavirus of travellers from Wuhan, China. UK experts suggest there could be hundreds more cases than have so far been acknowledged

A notice for passengers from Wuhan, China, displayed near a quarantine station at Narita airport in Narita, Japan 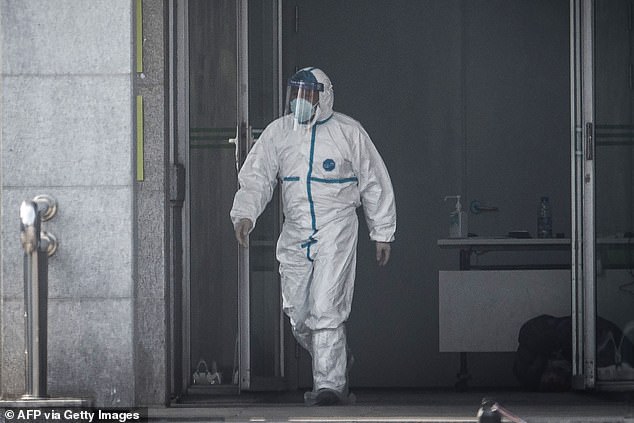 A medical staff member walks outside the Jinyintan hospital, where patients infected by a mysterious SARS-like virus are being treated, in Wuhan yesterday

An outbreak of pneumonia-like illnesses began in Wuhan, China, at the end of 2019.

Its symptoms are typically a fever, cough and trouble breathing, but some patients have developed pneumonia, a potentially life-threatening infection that causes inflammation of the small air sacs in the lungs.

Scientists in China recognized its similarity to two viruses that turned into global killers: SARS and MERS.

SARS, or severe acute respiratory syndrome is caused by the SARS coronavirus, known as SARS Co, and first emerged in China in 2002.

By the end of the outbreak, the virus had spread to several other Asian countries as well as the UK and Canada, killing 774.

MERS, or Middle East respirator syndrome originated in the region for which it’s named, ultimately killed 787 people and belongs to the same family of coronaviruses as SARS.

The new virus wasn’t a match for either of those two, but it did belong to the same coronavirus family.

Coronaviruses are a large family of pathogens, and most cause mild respiratory infections – i.e. the common cold.

But because the SARS and MERS proved deadly, the emergence of another new coronavirus has health officials on edge around the world.

Like its two dangerous cousins, the new coronavirus appears to have originated with animals – particularly seafood, chickens, bats, marmots – found at a Wuhan market that’s been identified as the epicenter of the outbreak.

The symptoms of SARS, which may be similar to those of the new coronavirus, include:

After these symptoms, the infection will begin to affect your lungs and airways (respiratory system), leading to additional symptoms, such as:

So far, there isn’t a treatment for the new virus or SARS, though the new virus has been sequenced, allowing for rapid diagnostics.

Of the 17 new cases in Wuhan – believed to be the epicentre of the outbreak – three were described as ‘severe’, of which two patients were too critical to be moved, authorities said.

Those infected range from 30 to 79 years old.

Professor Neil Ferguson, one of the authors of the report, said it was ‘too early to be alarmist’ but he was ‘substantially more concerned’ than a week ago.

He told the BBC: ‘People should be considering the possibility of substantial human-to-human transmission more seriously than they have so far.

‘It would be unlikely in my mind, given what we know about coronaviruses, to have animal exposure, be the principal cause of such a number of human infections.’

The virus has now infected 62 people in Wuhan, city authorities said, with eight in a severe condition, 19 cured and discharged from hospital, and the rest remaining in isolation receiving treatment.

Two people have died so far from the virus, including a 69-year-old man who died on Wednesday after the disease caused pulmonary tuberculosis and damaged multiple organ functions.

Authorities said they had begun ‘optimised’ testing of pneumonia cases across the city to identify those infected, and would begin ‘detection work…towards suspected cases in the city’ as a next step, as well as carrying out ‘sampling tests’.

Scientists with the MRC Centre for Global Infectious Disease Analysis at Imperial College in London warned in a paper published Friday that the number of cases in the city was likely to be closer to 1,700, much higher than the number officially identified.

Authorities said Sunday that some of the cases had ‘no history of contact’ with the seafood market believed to be the centre of the outbreak.

No human-to-human transmission has been confirmed so far, but Wuhan’s health commission has previously said the possibility ‘cannot be excluded’.

Three cases have also been reported overseas – two in Thailand and one in Japan.

Although there has been no official announcement of screening measures on the mainland, Wuhan deputy mayor Chen Xiexin said on state broadcaster CCTV that infrared thermometers had been installed at airports, railway stations and coach stations across the city.

Chen said passengers with fevers were being registered, given masks and taken to medical institutions, with nearly 300,000 body temperature tests had been carried out, according to CCTV.

Authorities in Hong Kong have stepped up detection measures, including rigorous temperature checkpoints for inbound travellers from the Chinese mainland.

Wuhan is a city of 11 million inhabitants that serves as a major transport hub, including during the annual Lunar New Year holiday, when hundreds of millions of Chinese people travel across the country to visit family. 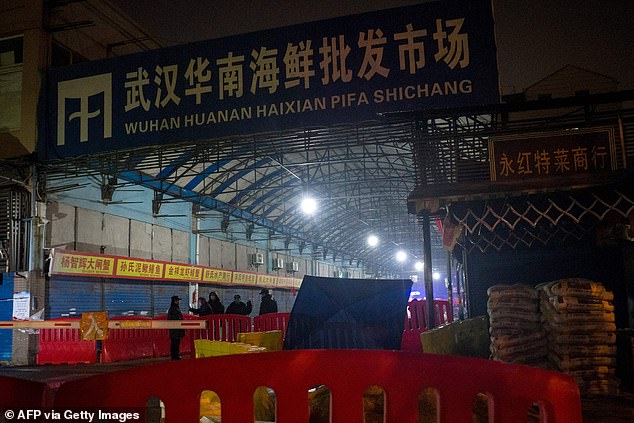 Security guards in front of the closed Huanan Seafood Wholesale Market in the city of Wuhan, where the city’s health commission said that a man who died from a respiratory illness had purchased goods