China is accused of inserting illicit programmes into control systems managing India’s power supply, as well as a high-voltage transmission substation and a coal-fired power plant.

The disclosure lends weight to the idea that a massive power cut in Mumbai last year was a deliberate Chinese attack to warn India not to press its border claim, The New York Times reported. 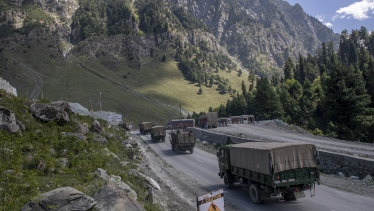 An Indian army convoy moves on the Srinagar-Ladakh where India has border disputes with China.Credit:AP

The October12 blackout in India’s financial capital shut down the stock market and trains, and forced hospitals to run emergency backup generators.

Indian officials at the time said state-sponsored cyber attackers were suspected to be behind the blackout.

Recorded Future, a firm that monitors state cyber activity, found a sharp increase in attacks by Chinese-backed groups from the start of last year, rising further from the middle of the year.

Indian and Chinese soldiers were involved in hand-to-hand fighting in Ladakh during the summer as the armies clashed over the disputed border.

Recorded Future found “a concerted campaign against India’s critical infrastructure”, with 10 power sector organisations targeted, including centres for balancing supply and demand in the power grid.

Most of the malware was not activated. But just by signalling it has the capability, China could potentially wield significant deterrence against India, experts said. The report added that there was a “pattern of Indian organisations being targeted through behavioural profiling of network traffic to adversary infrastructure”.

Mumbai police were investigating further after the report pointed to possible evidence of 14 “Trojan horse” programmes incorporated in the city’s power system, Anil Deshmukh, a minister for Maharashtra state, said yesterday. “The preliminary report was handed over to the power ministry. We will investigate further,” he added.

China denied being behind the power cut.

“Speculation and fabrication have no role to play on the issue of cyber attacks. Highly irresponsible to accuse a particular party with no sufficient evidence,” a spokesman for the Chinese embassy in India said yesterday.